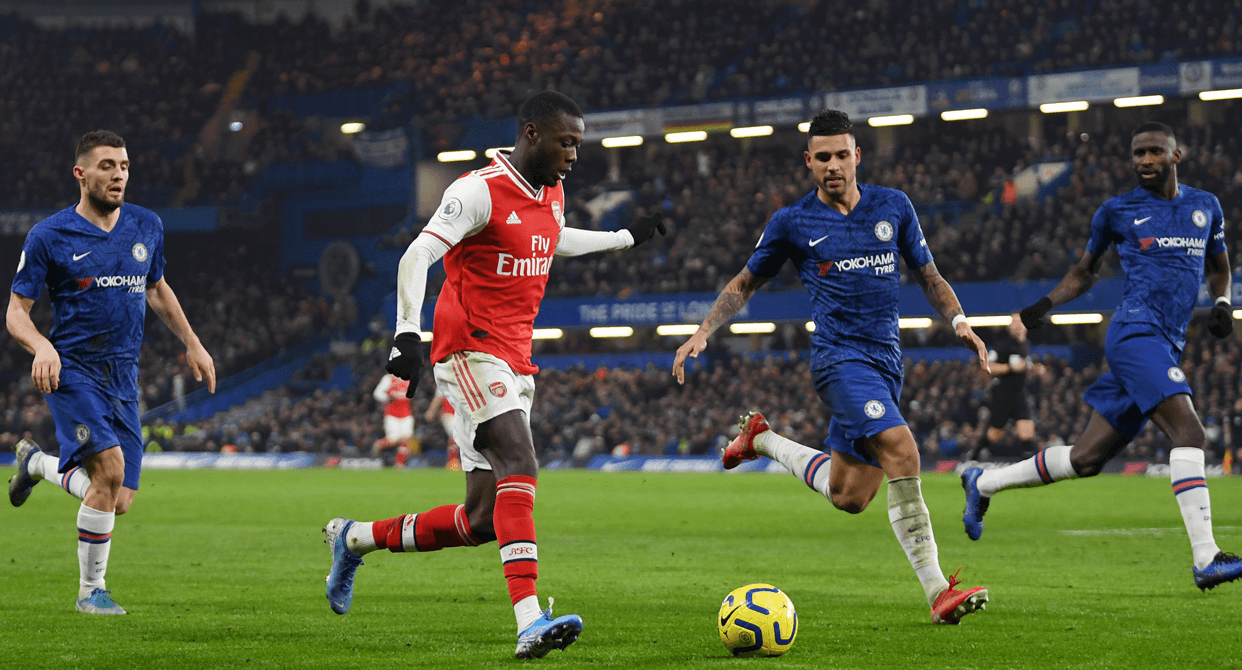 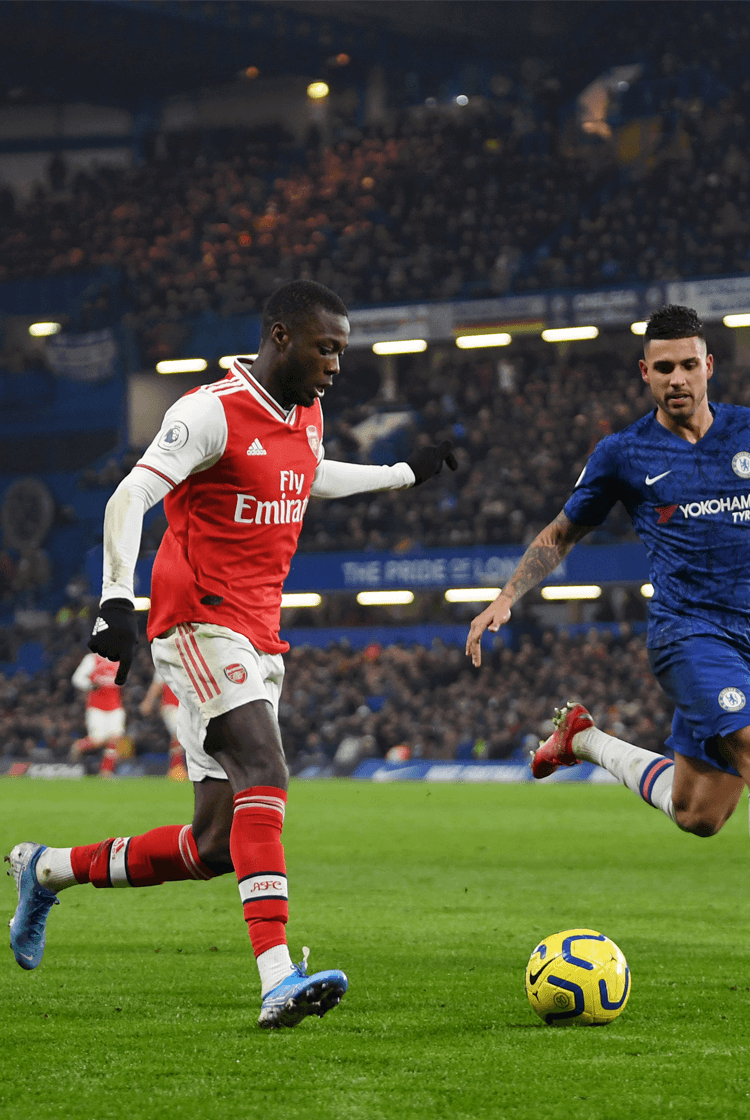 Arsenal recovered from twice falling a goal behind and the dismissal of David Luiz to draw 2-2 at rivals Chelsea. Against his former club, Luiz was given a red card for pushing Tammy Abraham in the penalty area; Jorginho scored from the resultant penalty, and after Gabriel Martinelli scored a fine equalising goal, in the 84th minute César Azpilicueta restored the hosts' lead, again putting them on course for victory. Héctor Bellerín, starting for the first time under Mikel Arteta having recovered his fitness, then scored the unlikely equalising goal in stoppage time, concluding a positive evening for a team that had played for over an hour with 10 men.  "To do that against this kind of opponent in this stadium, I really value," Arteta said. "I wasn't here a few weeks ago but what I am demanding every day they are trying their best to do it. The togetherness and leadership they showed is what I wanted to see. We are going in the right direction; this was a special night for everybody." 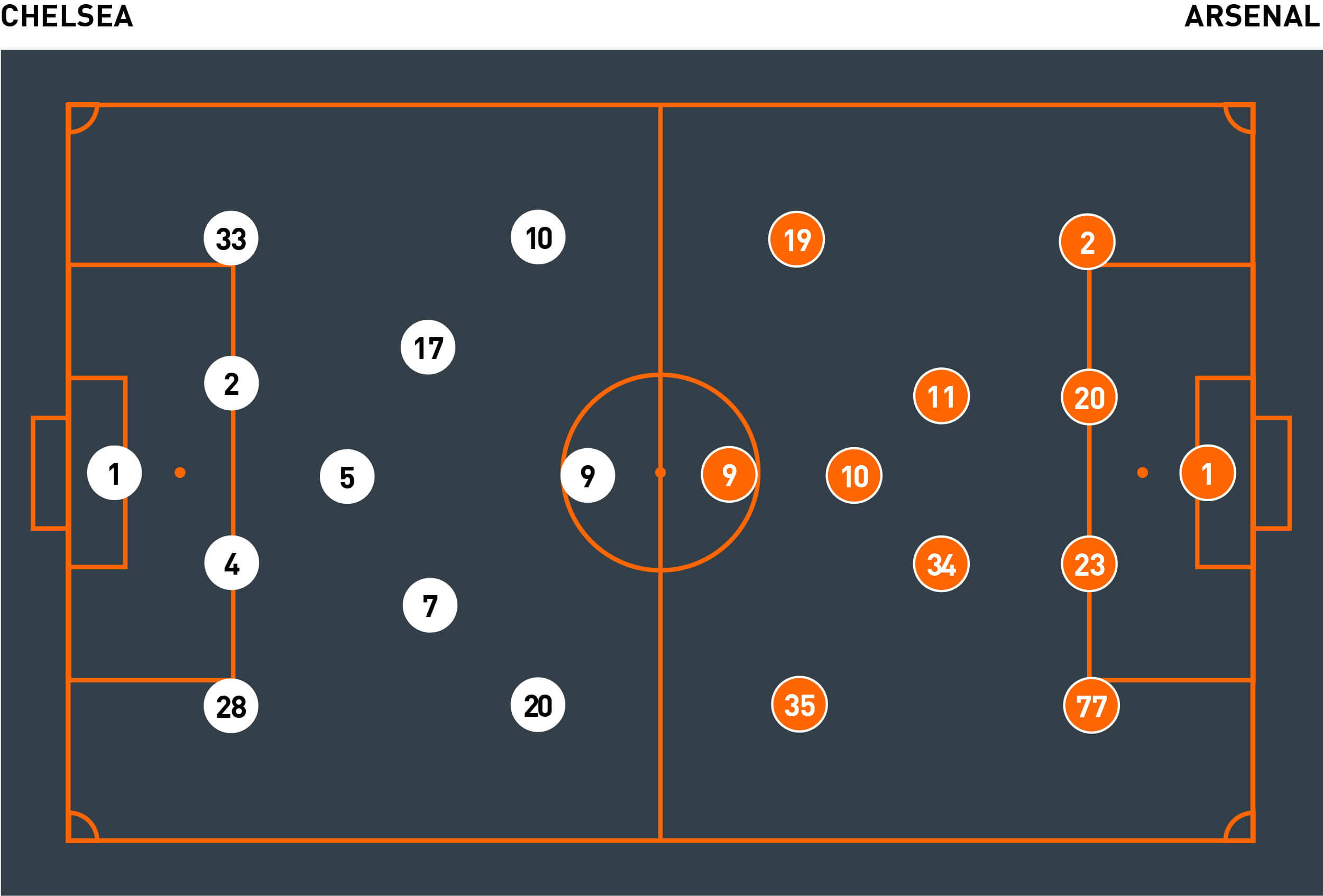 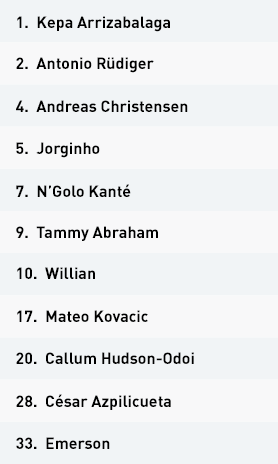 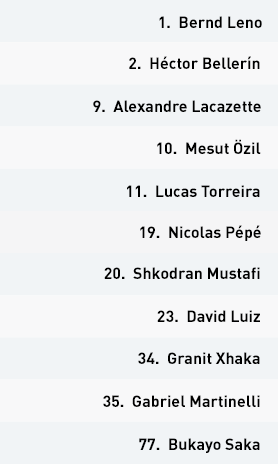 While they were attacking Frank Lampard again set Chelsea up into a 4-3-3 formation, led by the front three of Tammy Abraham, Willian and Callum Hudson-Odoi. Arsenal were defending with a 4-2-3-1.

If the opening exchanges were fairly balanced, and involved both teams having a reasonable share of possession, Chelsea prioritised moving it wide and the penetrative runs of N'Golo Kanté, Mateo Kovacic and Abraham in half-spaces beyond Arsenal's defence. Willian and Hudson-Odoi would move inside to pursue cut-backs or to offer combinations, but David Luiz's red card then transformed the pattern of play through the visitors adopting a 4-4-1 and Granit Xhaka replacing him in central defence, Mesut Özil withdrawing to alongside Lucas Torreira in central midfield, and Chelsea then focusing on breaking them down.

Mikel Arteta's team impressively protected the central areas of the pitch, largely forcing their opponents to circle possession in front of their defensive block. The numerical advantage Chelsea had in midfield was often negated by Arsenal's four midfielders working to limit the spaces in which an effective overload could exist.


Their wide forwards Nicolas Pépé and Gabriel Martinelli showed an admirable commitment to supporting full-backs Héctor Bellerin and Bukayo Saka, against overloads and the risk of becoming isolated, and given the threat posed by Willian and Hudson-Odoi. With Chelsea circulating possession around their block and into wide areas of the pitch, Lampard's team attempted to drive inside and to combine with the nearest midfielder to eliminate individuals from Arsenal's defensive structure, to receive possession facing forwards, and to do so close to goal

Arsenal's focus became frustrating Chelsea by keeping as many bodies as possible between the ball and the goal, so all 10 players were often positioned in the defensive third, contributing to Chelsea preferring to play with width. Their full-backs advanced further forwards to attempt to create, but the consistent presence of at least two opponents defending that territory, and the pressure they applied to the ball, meant that the crosses they then delivered were lacking in threat.

It required a two-on-one and a short corner routine for the nature of delivery they had sought to be possible, and it then contributed to them restoring their lead. They may have registered 19 attempts on goal, but those attempts were lacking the quality required against Arsenal's defensive structure.

Arsenal were organised by their manager Mikel Arteta into a 4-2-3-1 formation, built on the double pivot provided by Granit Xhaka and Lucas Torreira, during the periods they had possession. Chelsea pressed high, from a 4-3-3, amid Arsenal attempting to play an attacking game during the first half and building possession through their midfielders.

Mesut Özil drifted to the right when they were in possession, and sought to create two-on-ones with Nicolas Pépé, therefore contributing to significant spaces existing between that double pivot and their attack. Alexandre Lacazette withdrew into those spaces, where he would receive with his back to goal and then bring others into play. When they were unable to build through or around Chelsea the visitors instead turned to David Luiz's ability to play long passes from central defence, to release Pépé or Gabriel Martinelli, but those passes too rarely reached their intended target.

Tammy Abraham had led Chelsea's press, prioritising the in-possession central defender and limiting his passing channels to force play only to one side. After Luiz's dismissal Arsenal instead adopted a 4-2-3; even with Pépé and Martinelli being given greater defensive responsibility the demands on their full-backs increased, because of the need for them to become more involved in their attacks.

The hosts' press became even more aggressive, and involved them using their spare number in midfield to advance and pressure Arsenal's central defenders. That the visitors remained so deep when they were out of possession meant that their approach during transitions became particularly crucial. Simply clearing possession offered little relief from the pressure they were confronted with, so releasing wide forwards Pépé and Martinelli, via diagonal passes, behind Chelsea's advancing full-backs became their priority.

It was only playing so defensively – as was demonstrated by them registering only three shots – that kept Arteta's team in contention for the point they ultimately secured. In the latter stages of the match they reorganised into a 3-4-2, through Rob Holding playing in central defence, Bukayo Saka and Bellerin as wing-backs, and Martinelli advancing to join Lacazette in a front two.

That increased presence on each wing, and the security provided by their three central defenders, encouraged Arsenal to be more proactive and attacking. Bellerin being sufficiently advanced led to him creating their second equalising goal.