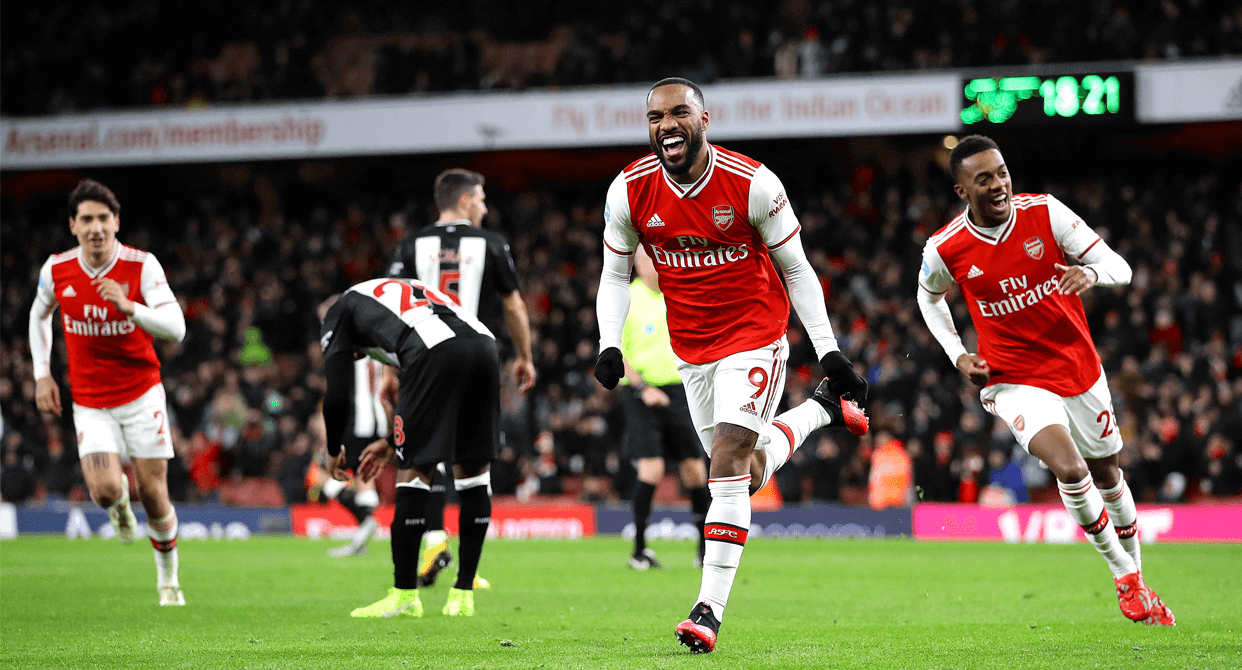 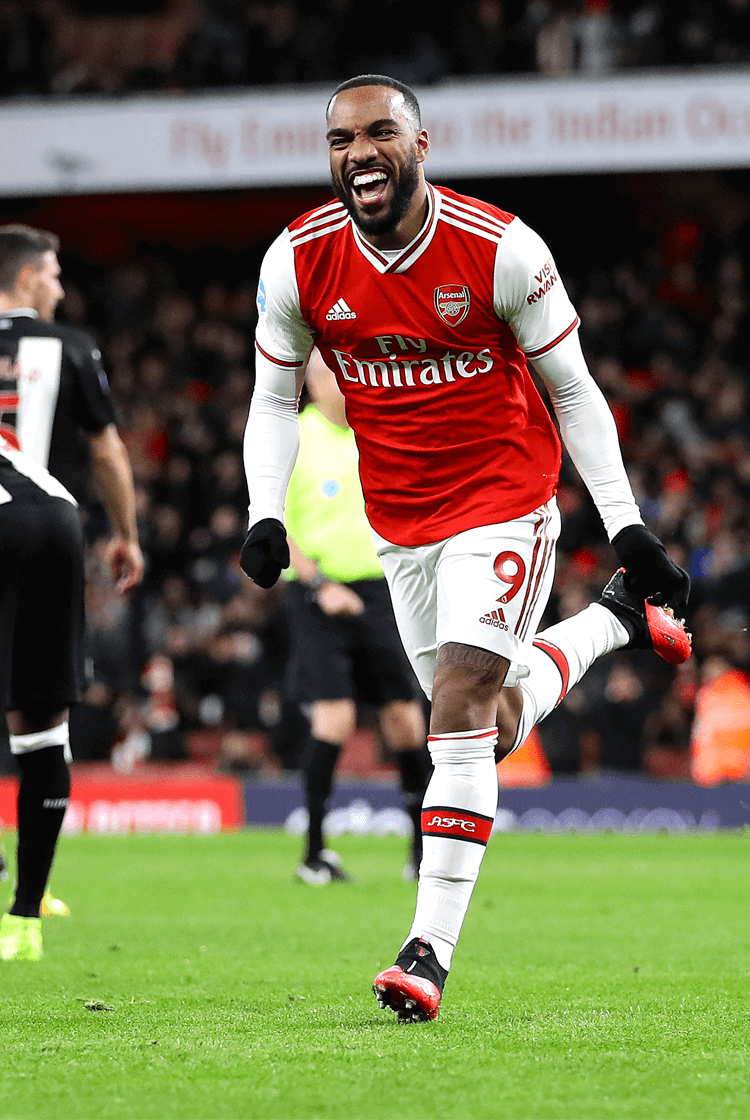 Mikel Arteta oversaw his second Premier League victory since his appointment as Arsenal manager when his team eased past Newcastle United. Their visitors defended resolutely, but Arsenal eventually took the lead during the second half, through Pierre-Emerick Aubameyang's finish. Once they did so, and through Newcastle demonstrating greater ambition in their pursuit of a point, they were presented with further chances to extend their lead, three of which were taken by Nicolas Pépé, Mesut Özil, and second-half substitute Alexandre Lacazette. Arsenal moved to within six points of fifth place which, following Manchester City's two-year ban from European competition, will bring with it Champions League qualification. "After the break we started saying we had to start closing the gap on the top teams and turn draws into wins," said Arteta, whose side kept a second successive clean sheet in the Premier League for the first time since April 2019. "This was the first opportunity and we've done it. All good." 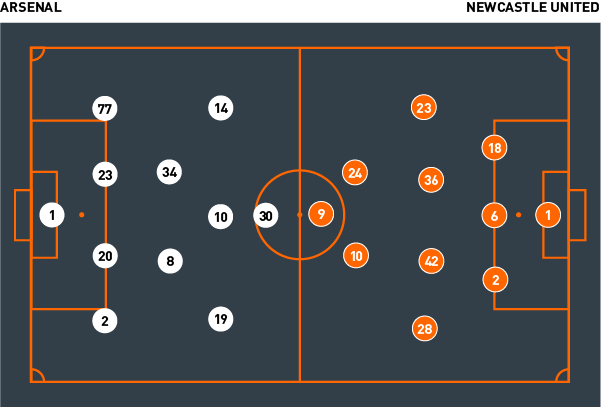 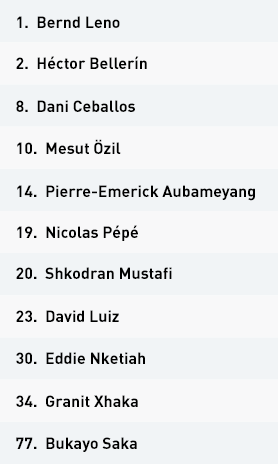 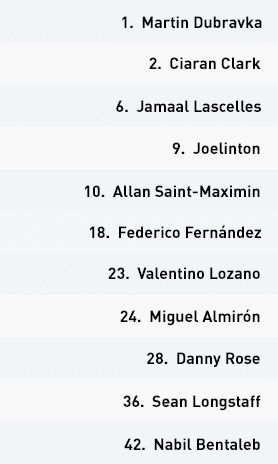 Mikel Arteta set Arsenal up in a 4-2-3-1 formation while they had possession. Granit Xhaka and Dani Ceballos formed their double pivot at the base of midfield, and Pierre-Emerick Aubameyang, Mesut Özil and Nicolas Pépé operated as the attacking triumvirate behind central striker Eddie Nketiah. In opponents Newcastle they hosted a team defending with a 5-4-1.

Newcastle quickly demonstrated that they had little interest in engaging with Arsenal beyond their defensive line. Once Arsenal’s central defenders had advanced past that line of engagement Joelinton would attempt to force possession towards one direction, but the hosts' defensive numbers meant that his efforts came to little. Despite being content with Arsenal having possession, Newcastle were keen to restrict the spaces behind their defensive line and between their defensive and midfield units, so they instead encouraged play towards wide areas. By denying Arsenal access to central areas they restricted their opportunities to create good quality chances.

On the edge of their defensive third Newcastle's central midfielders, Nabil Bentaleb and Sean Longstaff, closed down the ball-carrier but resisted attempting to tackle him, instead reducing the space and angles into which the ball-carrier could play. Attempts to tackle risked the relevant individual being taken out of the game, which could then undermine Newcastle’s defensive structure.

Arsenal circulated possession in front of Newcastle's low block, in an attempt to advance beyond it, but the numerical advantage that Newcastle had in their defensive third often negated their efforts. Despite conceding spaces in wide areas Newcastle still sought an element of control over how Arsenal could play once they were there. The positioning of Newcastle’s wing-backs and wide midfielders also showed the ball-carrier inside if he was closer to the byline than the edge of the penalty area.


This involved being positioned one-to-two yards closer to the goal than the attacker, in order to restrict spaces for fast-paced deliveries in behind their defence. Instead this positioning invited floated, slower crosses into the penalty area – the type that three central defenders and a proactive goalkeeper should be able to negate.

Newcastle mostly resisted, but the sheer number of crosses eventually led to a mistake, and with it Arsenal’s opening goal, where the positioning of Danny Rose at left-back and Allan Saint-Maximin towards the left of midfield invited Pépé to move inside and cross for Aubameyang's headed goal.

That goal ensured that Newcastle’s midfield had to move out of their deeper positions and then engage with Arsenal’s ball-carriers further up the pitch, even if they still did so in their own half. This opened up more space between the lines for Özil. He often drew a Newcastle central defender out of position with his movement, in turn creating space behind for a teammate to run into. With Newcastle's midfield increasingly advancing, there were additional spaces beyond the wide midfielders for full-backs Hector Bellerín and Bukayo Saka to exploit. Aubameyang moved into a more central attacking position during the second half, which created more space for Saka towards the left, and caused further problems for Newcastle.

At 2-0 Newcastle attempted to press Arsenal inside their own half. This unfamiliar strategy from the visitors left huge spaces between their defence and midfield, and ultimately led to Arsenal adding two further goals, and completing the rout.

Newcastle were set up in a 3-4-3 formation while they had possession. Steve Bruce fielded two January signings as his wing-backs; Valentino Lazaro and Danny Rose advanced to join Sean Longstaff and Nabil Bentaleb in midfield, when Miguel Almirón and Allan Saint-Maximin also became part of a three-strong attack, either side of Joelinton.

Arsenal remained in their 4-2-3-1 while they defended. Nicolas Pépé, Mesut Özil and Pierre-Emerick Aubameyang supported Eddie Nketiah in leading the press from the front, and owing to Newcastle’s willingness to let Arsenal dominate possession there was very little in the way of out-and-out attacking football from the visitors, who instead attacked on the counter.

When clearing possession Newcastle often directed it towards Joelinton, but he was isolated, and too often outnumbered by Arsenal’s defenders. Their only consistent threat came through Saint-Maximin’s ability to carry the ball but he, like Joelinton, was often confronted with multiple defenders.

Arsenal attempted to press Newcastle’s defenders by Özil advancing towards alongside Nketiah. The latter’s positioning was intended to keep the ball towards the side that Özil was pressing, so that Pépé or Aubameyang could close down the relevant wing-back and Arsenal could therefore squeeze Newcastle’s play into a small area, encouraging regains.

Mikel Arteta's team recognised the need to dominate transitions so they worked to quickly recover their defensive positions, and kept numbers goal-side of the counter-attacking individual. If there were opportunities to counter-press they would do so, but they prioritised recovering, to reduce the spaces left in behind. Newcastle’s desire to encourage Saint-Maximin and Almirón to run with the ball led to a number of fouls in Arsenal’s half, which led to set-piece opportunities – their only threat during transitions. Even those chances to send the ball into the penalty area came to little.