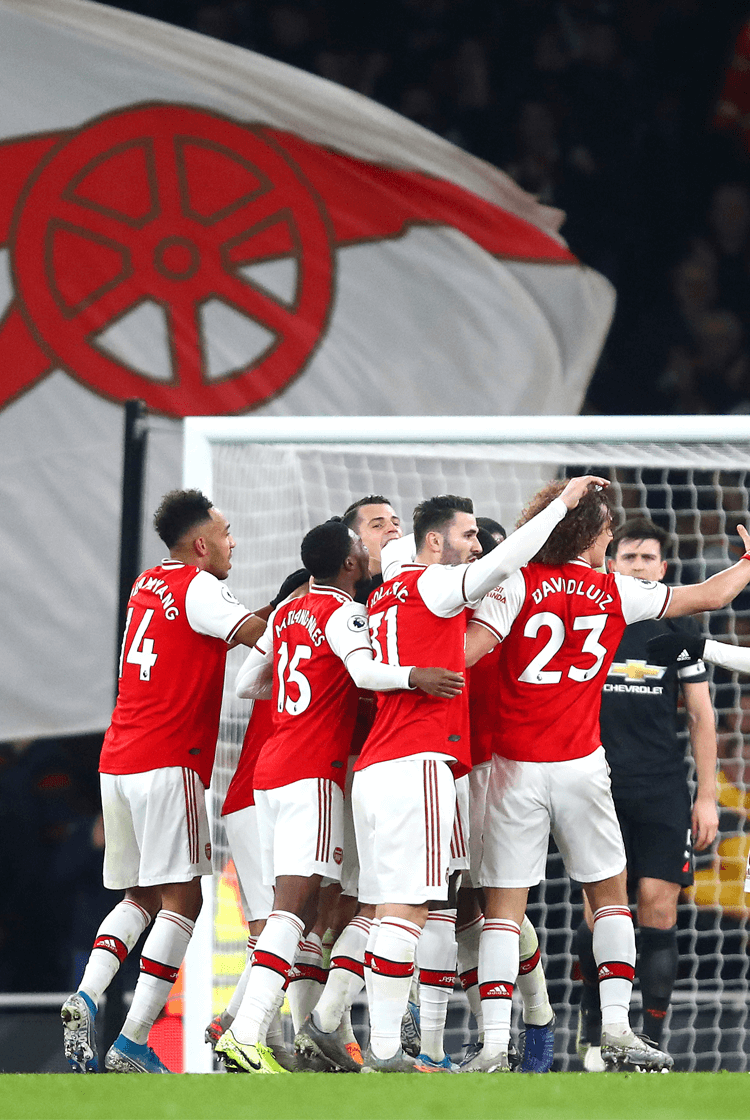 Arsenal recorded their first victory of Mikel Arteta's reign as manager when first-half finishes from Nicolas Pépé and Sokratis Papastathopoulos secured three valuable points against visitors Manchester United, who were without the injured Paul Pogba. Their first-half performance was perhaps their most impressive of the season, and even during the second their goalkeeper Bernd Leno was rarely tested. If United had performed well in winning their previous two, as has been the case throughout 2019/20 they again failed to win a third successive Premier League fixture, undermining their pursuit of the top four. "I'm very relieved to get the first win and we wanted to start the win in a different mood," Arteta said. "I hope this is the least we have to expect from the team. There are many areas that I would like to improve, for sure, but as well in the short time we've been together, for us to see such a change is encouraging." 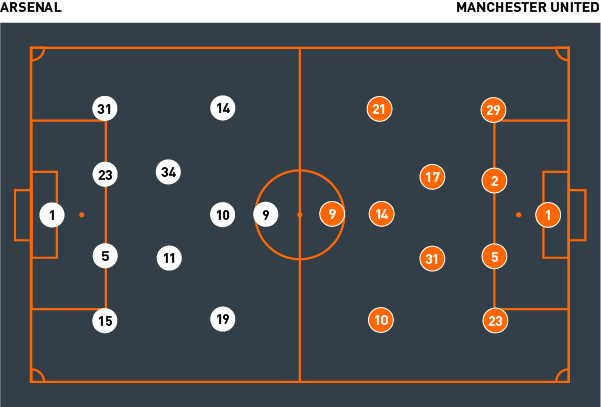 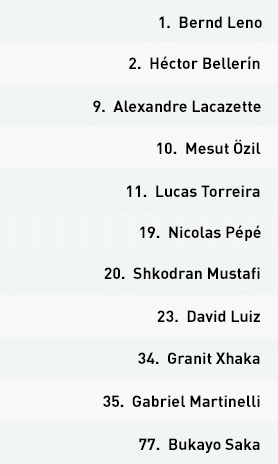 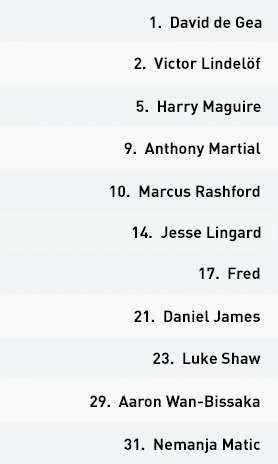 Mikel Arteta organised Arsenal into a 4-2-3-1 formation, in which Mesut Özil featured as the number 10 supporting Alexandre Lacazette. Manchester United also operated with a 4-2-3-1, but Arsenal remained patient in possession as they sought to play through their visitors' mid-block.

An approach that appears likely to become a regular feature of Arteta's reign as manager is his use of their central defenders during build-up phases. Sokratis Papastathopoulous and David Luiz sought to commit United's wide attackers, to create two-on-ones against them, with the relevant full-back. One would draw Anthony Martial before switching possession to the other, encouraging Jesse Lingard or Marcus Rashford to advance if United were to continue to press, either way creating a free number.

Owing to the threat posed by Pierre-Emerick Aubameyang and Nicolas Pépé, United's full-backs Aaron Wan-Bissaka and Luke Shaw were reluctant to advance, so Arsenal played passes in an attempt to encourage a higher press, though as in their defeat by Chelsea they still struggled to consistently penetrate beyond the initial phases of their build-ups. There are yet to be many good goalscoring chances, so there has been a reliance on set-pieces.


Lacazette was also encouraged to withdraw towards possession while Aubameyang ran in behind to encourage improved attacks, but in the second half they posed a greater threat during transitional moments, amid United committing increased numbers forward having fallen two goals behind. The position of Aubameyang and Pépé, when they were without possession, meant that they had a significant distance to travel after turnovers, but their athleticism ensured that they were capable of doing so.

It was the detail of the final pass, which either went to feet or narrowly behind the run, that meant that their attempts to counter slowed down, and encouraged United to recover their defensive shape. What had appeared a solid structure was undermined by the movement of the front four not matching that of those behind them, ultimately creating spaces.

Anthony Martial curved his pressing run to attempt to block switches of play and to dictate which side Arsenal built from, but he struggled to do so, and they were therefore capable of playing from where they pleased. The visitors were also vulnerable in wide territory; Shaw was uncertain whether to follow Pépé's movements inside, contributing to their progress along the right, and therefore the corner that preceded their second goal.

Manchester United, who had won their previous two matches, again adopted Ole Gunnar Solskjær's favoured 4-2-3-1 formation led by their central attacker Anthony Martial. Against opponents defending in that same shape they struggled to create goalscoring chances throughout the first half, but if that was partly because of the aggressive, organised press used by Arsenal, it also owed to United's ineffective attempts to build attacks.

Solskjær's team were forced into playing long passes by the intensity of that press, which restricted their short passing options. Marcus Rashford made diagonal runs from wide areas into the spaces between Ainsley Maitland-Niles and Sokratis Papastathopoulos, the hosts' right-back and right-sided central defender, to discourage the two central defenders from following Martial as he withdrew towards possession and sought to play between the lines. Martial also attempted to move off of Jesse Lingard, and to use the spaces created when Nemanja Matic or Fred advanced to press – to receive, turn and to advance.

A lack of creativity within central areas, combined with Lucas Torreira and Granit Xhaka effectively shielding the more-organised Arsenal's defence, combined to undermine United's attempts to attack. Aware that Rashford would seek to cut inside, the near-side central midfielder would protect the relevant spaces while he advanced out wide, inviting the relevant full-back to engage, and the central defenders to remain compact.

Pierre-Emerick Aubameyang and Nicolas Pépé also worked hard defensively, contributing to United becoming disjointed in the final third and individuals attempting to create and finish chances – and therefore taking numerous touches around the penalty area, where they would be surrounded by opponents – instead of combining with teammates. If Arsenal's back four remaining compact was also influential, the combined work ethic of Xhaka, Torreira, Aubameyang and Pépé as a unit in front of them – something Mikel Arteta has introduced – made it significantly easier for them to do so.