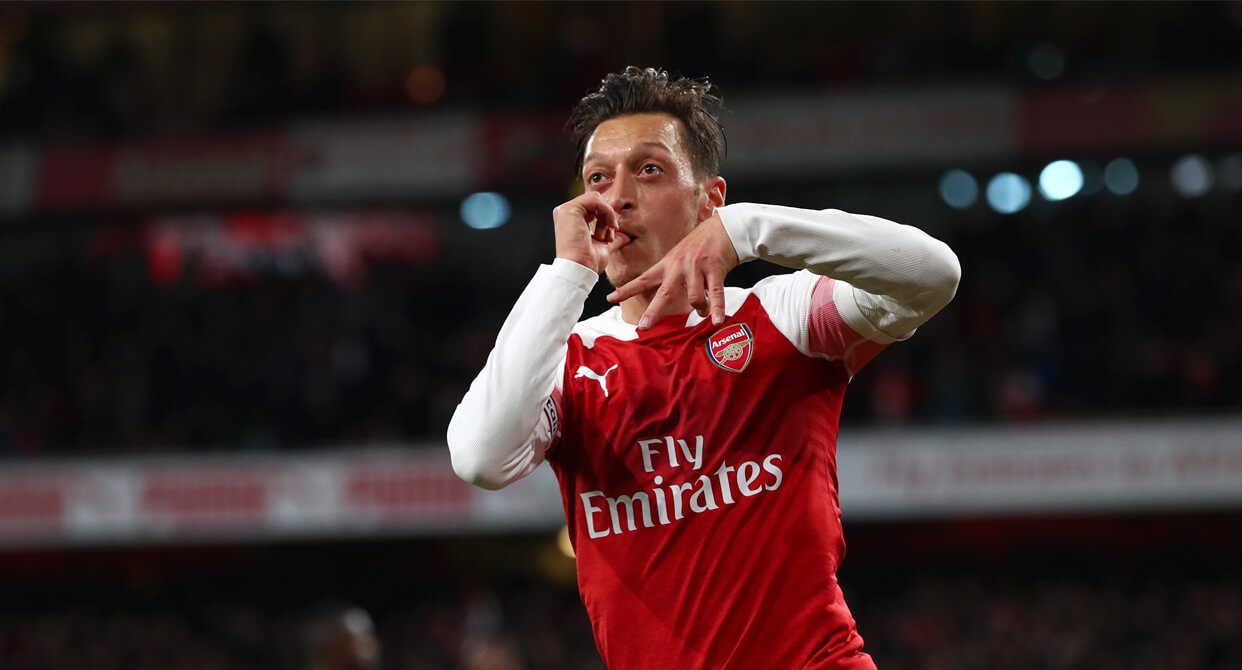 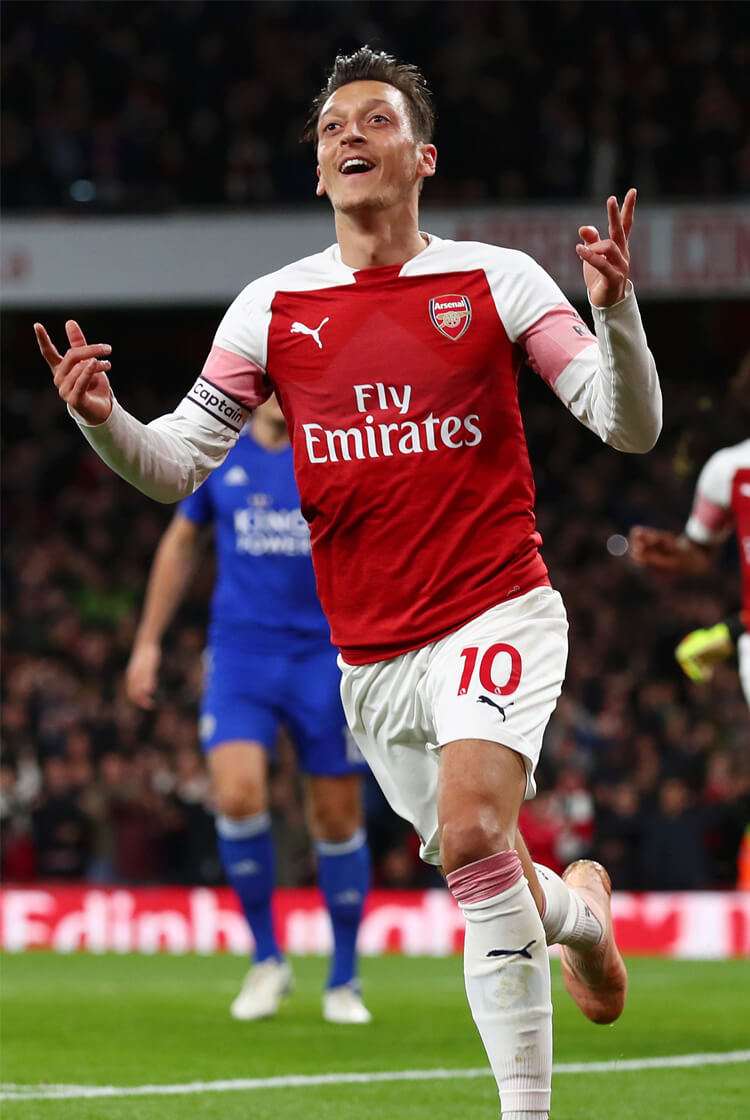 Arsenal recorded their seventh successive win in the Premier League with a resounding victory over Leicester at the Emirates. Mesut Ozil, wearing the captain’s armband, led by example with one of his finest performances in a Gunners shirt. The Foxes took a deserved lead midway through the first half when Hector Bellerin deflected a Ben Chilwell cross into his own net, but the hosts responded on the stroke of half-time – Ozil combined with Bellerin before nonchalantly opening his left foot and guiding the ball into the far post. With the scores still level, head coach Unai Emery made a double substitution at the hour mark – and it proved a match-winning decision. A quickfire brace from Pierre-Emerick Aubameyang moments after his introduction, Ozil playing a crucial role in the build-up to both, sealed the three points for Arsenal. 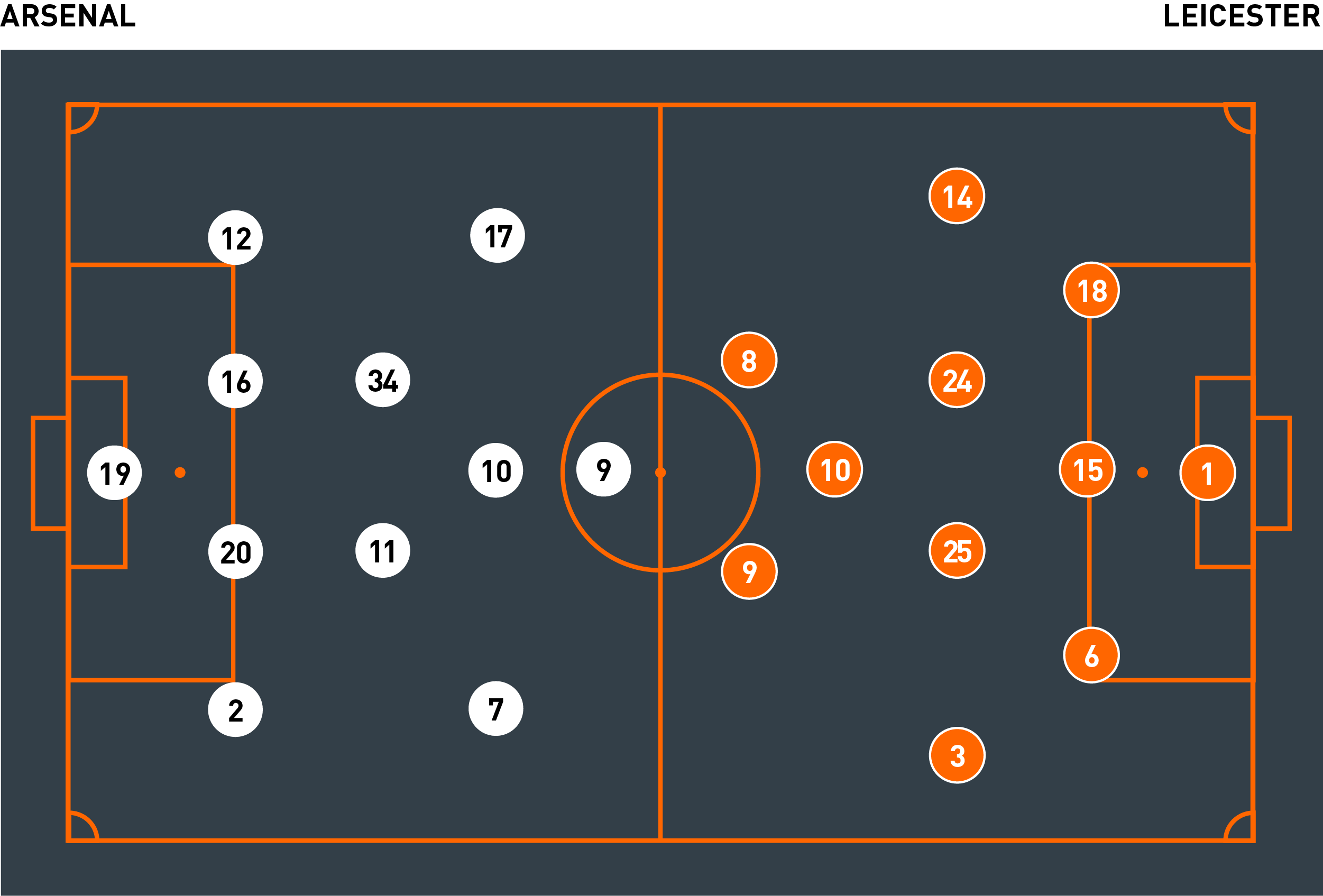 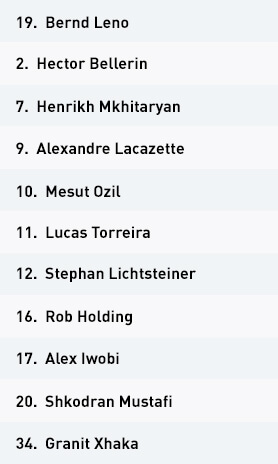 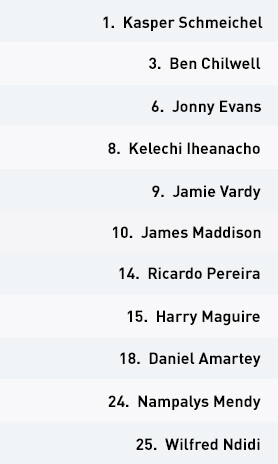 Arsenal were looking to make it seven Premier League wins in a row, as head coach Unai Emery changed from the 4-4-2 formation that demolished Fulham to a 4-2-3-1 structure. Stephan Lichtsteiner came in at left-back for the injured Nacho Monreal, with Mesut Ozil returning in place of Danny Welbeck.

The Gunners immediately sought to gain control of the ball, as they worked play back to goalkeeper Bernd Leno from the first moment of possession. They pushed both full-backs high, as the double pivot of Granit Xhaka and Lucas Torreira filled the central spaces.

Despite creating passing options within their defensive third, they struggled to progress the ball through midfield. They rarely created within the opening 20 minutes, and Leicester looked the more dangerous side. It wasn’t until Ozil started to be found between the Leicester lines that they started to sustain spells of pressure. Alex Iwobi and Henrik Mkhitaryan were effective in creating further space for the full-backs to step into midfield while occupying the visitors’ central midfield pairing. Ozil could then move behind the midfield to become Arsenal’s main attacking link.

Having gone behind to Ben Chilwell’s deflected cross, the hosts regrouped well. Ozil’s clever positioning away from the congested central midfield enabled his side to quickly transition into attack after winning possession in their own half. The playmaker drove forward and continued his run into the box after releasing the overlapping Bellerin. The right-back delivered the ball into the path of Ozil, who opened his foot to exquisitely place his effort into the far corner.

Arsenal continued on the front foot as the second half settled, with Iwobi placing consistent pressure on the visitors’ back line through his direct running with the ball. Mkhitaryan’s inside movements continued, and he provided a second crossing target for Iwobi, alongside Alexandre Lacazette. Harry Maguire and Jonny Evans were forced to clear a number of crosses to safety.

With his side still searching for another opening, Emery introduced Pierre-Emerick Aubameyang and Matteo Guendouzi for Mkhitaryan and Lichtsteiner just after the 60-minute mark – and this change reaped immediate rewards. To that point, Lacazette had been reduced to one-touch link-up play in a three-against-one situation, but Aubameyang added an important second presence for Leicester’s central defence to deal with. Ozil continued to rotate around the congested central zone, but Arsenal now had enough bodies between the lines to penetrate in behind. An inch-perfect splitting through ball from Ozil again found Bellerin, whose first-time cross was tapped in at the far post by Aubameyang.

Aubameyang grabbed a second moments later, again at the far post, as the hosts cut through their opponents with a wonderfully flowing move forward. Xhaka’s role as an inward left-back essentially created a central three in possession, and with Bellerin’s overlapping runs forward, they now had a midfield unit of four in front of two central defenders. With Iwobi, Lacazette, Ozil and Aubameyang ahead of the ball, Arsenal had the pace and skill to penetrate a back five. The ball was switched across to Bellerin in the right wide area, who found Ozil on the edge of the box. A superb dummy from the German created a two-on-one situation with Lacazette, and Ozil unselfishly squared the ball for Aubameyang to add a third.

Out of possession, Arsenal were initially vulnerable to early passes forward behind their full-backs on the transition. As both Lichtsteiner and Bellerin pushed forward, Leicester’s strikers looked to make curved runs away from the centre-backs, thus exploiting the most space possible. Despite quick recoveries from the defence, the midfield couldn’t establish any form of counter-pressing due to their opponents’ quick forward play.

They similarly struggled to contain switches of play from the away side, with Iwobi and Mkhitaryan forced to recover all the way back – defensive commitments thus reduced the involvement of Arsenal’s wide players in the opening spell of the match. This in turn reduced their effectiveness when they were presented with an opportunity to counter.

Leicester’s entire outfield unit dropped deeper in the second half, and the distance became too great for the visitors to effectively counter-attack in the wide areas. James Maddison became the target for their forward passes rather than Jamie Vardy or Kelechi Iheanacho, making it easier for Arsenal’s central defence to win these balls forward and in turn maintain the attacking pressure.

After a home defeat to Everton before the international break, manager Claude Puel opted to change the structure of his Leicester team. The Foxes moved away from a 4-2-3-1 and set up in a 3-4-1-2 formation, with central defender Jonny Evans replacing the suspended Wes Morgan in the only change of personnel.

With Arsenal pushing their full-backs high in the early moments, Leicester’s two strikers, Jamie Vardy and Kelechi Iheanacho, could spin away from their central markers and move into the wide areas, allowing for a quick transition into attack. These transitions were also helped by the defensive structure of their front line; with Vardy and Iheanacho occupying the left and right of a front three, both strikers were already in position to attack around the hosts’ central defence.

As the visitors gained control of possession, wing-backs Ben Chilwell and Ricardo Pereira moved high, providing maximum attacking width. The positioning of Vardy and Iheanacho continued to frustrate Arsenal, as they stood in between the central defenders and full-backs. This forced both of Arsenal’s wide midfielders to recover all the way back and track Leicester’s wing-backs. James Maddison soon dropped away from the central defence, playing between Arsenal’s lines; his positioning behind Lucas Torreira and Granit Xhaka created a link between midfield and attack, and enabled the visitors to switch the ball quickly from side to side.

Arsenal slowly grew into the game, but just as they were creating their best spell on the ball, Leicester took the lead. Harry Maguire intercepted Rob Holding’s loose ball out of defence, finding Wilfred Ndidi. The midfielder switched out to wing-back Chilwell, whose deflected cross arrowed into the net via the foot of Hector Bellerin.

The hosts reacted well after conceding, though, and their clever midfield rotations continued well into the second half. Leicester were often forced to defend with all 11 players deep inside their half, and this in turn naturally reduced their threat on the counter. Even when they could control the ball and stabilise the game with safe passes, the midfield decided to play long balls forward in the central lane for Maddison to chase. Direct passes targeting the hosts’ full-backs might have been a better option in helping them to regain a foothold in the game.

Despite the introduction of Marc Albrighton and the change to a 3-5-2 structure, two quick goals ended their hopes of taking something from the game. Puel changed his system once more, to a 4-4-2 – and this was effective in reducing the number of gaps and spaces Arsenal had to exploit. By this point, though, the game was already lost.

Leicester formed a back five out of possession for most of the game, with two central midfield screening players blocking Arsenal’s central access. Maddison stepped up to create a front three, as both Vardy and Iheanacho moved to the side, ready to attack the hosts’ central defence on the break. But as the first half progressed and Arsenal created spells of pressure, the Foxes’ central midfielders were unable to block access into Mesut Ozil, who had rotated around the midfield unit.

As they desperately tried to overload the inside movements of Iwobi and Mkhitaryan, Leicester struggled to contain the three-on-two Wilfred Ndidi and Nampalys Mendy were being confronted with in midfield. Both wing-backs were also being pinned back, which in turn increased Iwobi and Mkhitaryan’s influence on the ball.

Leicester converted into a compact low block in the opening parts of the second half – they remained in their 5-3-2 structure but dropped around 30 yards deeper. Arsenal’s substitutions brought immediate rewards, however, and the visitors were noticeably troubled by their opponents’ new shape. Puel changed his side’s defensive structure for a third time, with right wing-back Pereira replaced by winger Rachid Ghezzal in a now 4-4-2 system. Having four consistent defenders and midfielders reduced the gaps Arsenal had penetrated for their two strikes, and the balance of the match evened out towards the end.