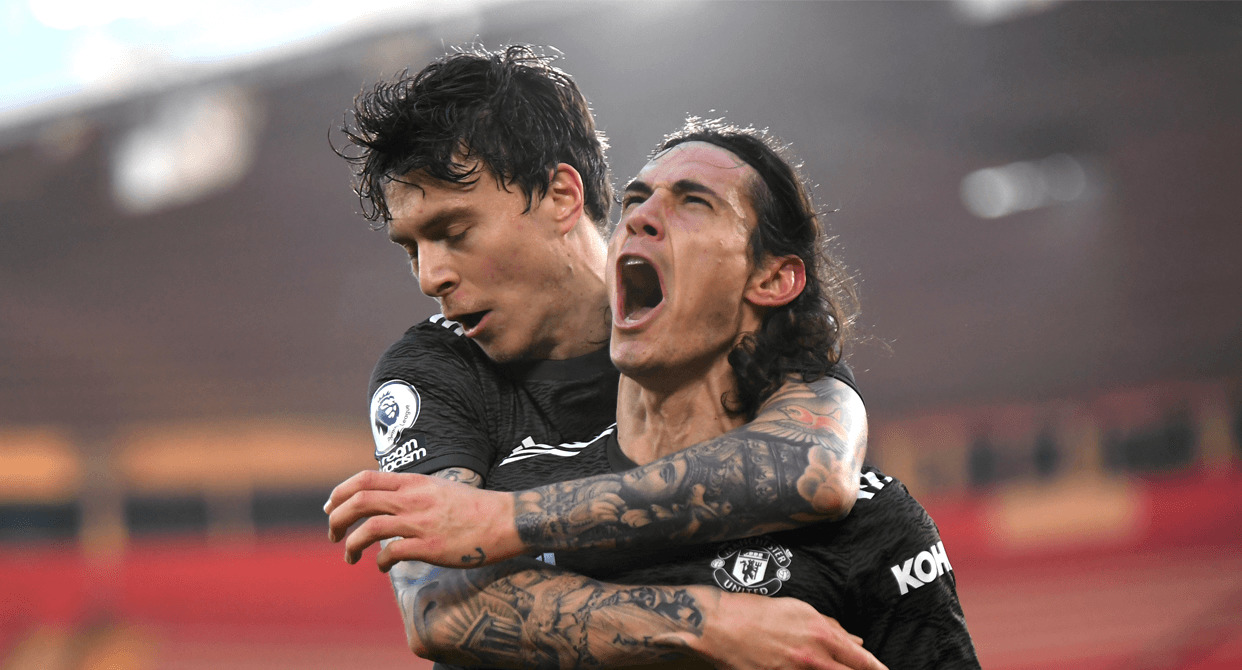 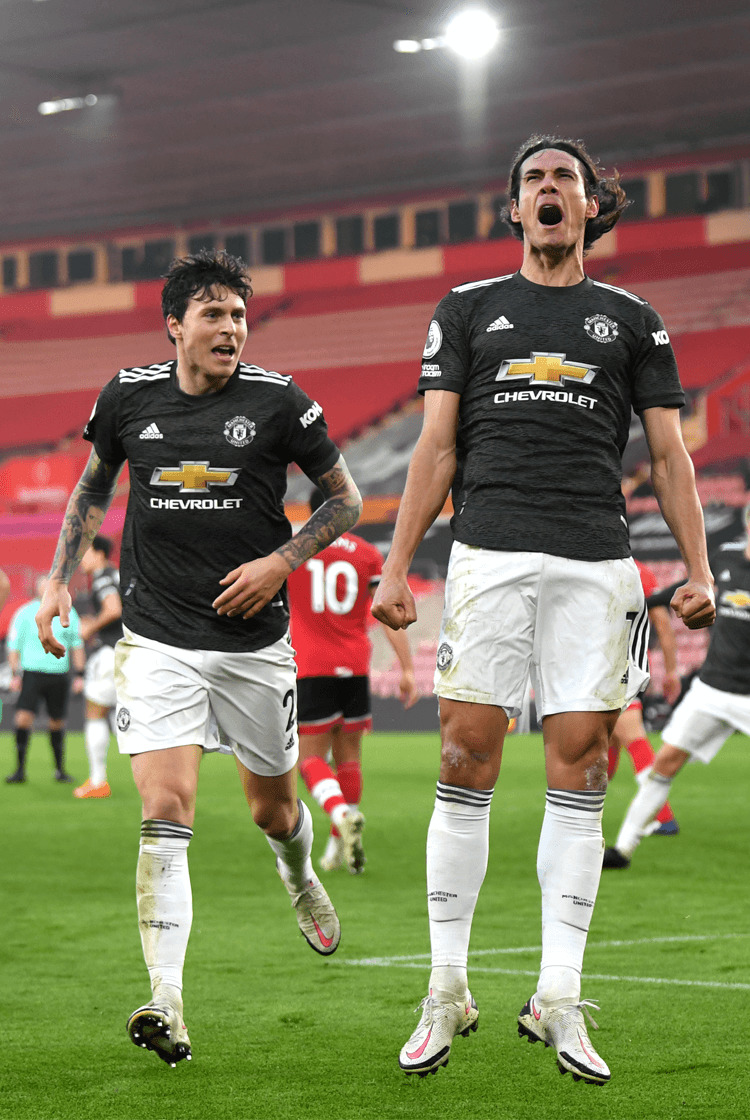 Manchester United recovered from two goals down with just 30 minutes remaining at St Mary’s to beat Southampton and extend their impressive run of comeback victories. They became the first side in Premier League history to win four consecutive away games despite trailing in each; one goal from Bruno Fernandes and two for Edinson Cavani transformed the latest of those. The winning goal arrived in second-half injury time to spark jubilant celebrations for United, who ended the seven-game unbeaten streak of Ralph Hasenhüttl’s Southampton. “It's one of those that when you win, the mistakes we made don't really matter,” said United's manager Ole Gunnar Solskjaer. “This team is getting better and better, which is what I want to see.” “We had some fantastic moments,” Hasenhüttl said. “The best we have had against such sides. I’m very happy about how we played. The second half was difficult but it is difficult to defend against this opposition.” 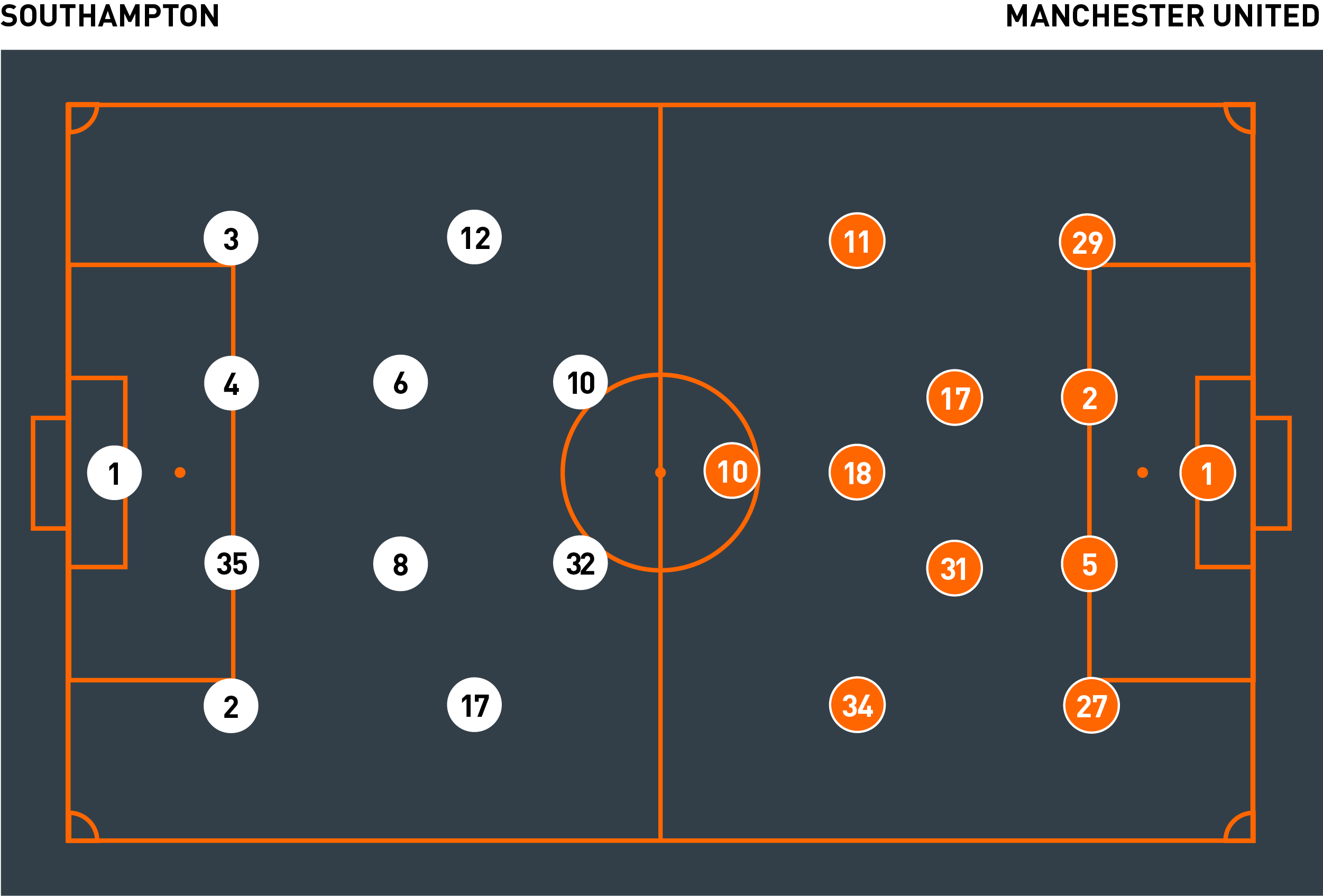 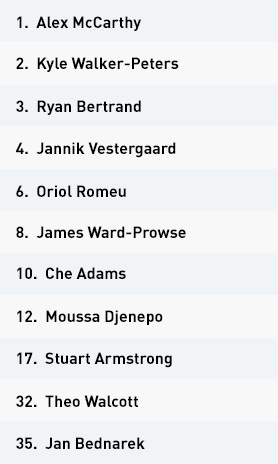 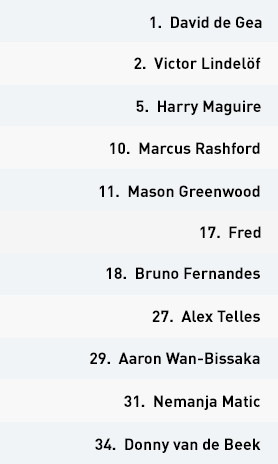 Southampton were organised by their manager Ralph Hasenhüttl into a 4-4-2 formation led by the front two of Theo Walcott and Che Adams. Their visitors, Manchester United, defended with a 4-3-3, one that on this occasion featured a front three of Marcus Rashford, Mason Greenwood and Bruno Fernandes.

Where possible, United sought to press Southampton high up the pitch, via Greenwood and Rashford closing down Southampton's central defenders when they received possession. From his slightly deeper position, Fernandes prioritised Oriol Romeu, to discourage Southampton from building through the centre of the pitch; when possession was instead played to one of their full-backs, the relevant wider central midfielder advanced to close him down; by United's full-backs remaining in position they avoided risking a two-on-one.

What that also meant was that United's midfielders needed to move as a unit when that press was applied, making switches of play possible. Southampton's wide midfielders also moved infield to overload the central areas of the pitch, and their full-backs advanced with width. Many of Southampton's attacks concentrated on those wide areas, which contributed to them winning set-pieces, and using James Ward-Prowse's accuracy from them, as was demonstrated by both of their goals.


Their ability to draw their opponents before using the spaces they had vacated gave them further potential. Passes were played to the feet of those using a closed body shape to trigger pressure from United, and the receiving player would either seek to pause in possession, or to set it back before spinning off and into space; that they were regularly capable of feeding a free player was significant, and increased that potential.

During the second half United's out-of-possession structure was most consistently closest to a 4-4-2, and began to mirror their hosts' defensive approach. Their front two pressed Southampton's central defenders, and sought to screen passes to Romeu and Ward-Prowse, who were also monitored by Nemanja Matic and Fred. If the ball travelled to a full-back, the relevant wide midfielder and forward closed him down.

Regains were therefore made, and wayward passes played. Southampton also struggled to create quality goalscoring chances as a consequence, and became reliant on attacking on the counter, which United defended effectively against.

Manchester United again used Ole Gunnar Solskjaer's favoured 4-2-3-1 formation, which on this occasion was built on the double pivot provided by Nemanja Matic and Fred. Southampton defended with the same 4-4-2 with which they attacked.

The hosts demonstrated sound defensive organisation during the first half, and they pressed with aggression when United sought to build play from goalkeeper David de Gea. They also worked to set a trap in wide areas, by encouraging play towards one wing before closing access elsewhere, therefore making regains and forcing mistakes.

Theo Walcott and Che Adams led their press by closing down United's central defenders, and attempting to screen passes to Matic and Fred. Behind them, Oriol Romeu and James Ward-Prowse also prioritised Matic and Fred, owing to the route they otherwise offered out of United's press.

If Moussa Djenepo and Stuart Armstrong closed down United's full-backs, the ball-side attacker worked to negate a return pass into central defence, and the far-side attacker moved to cover United's ball-side central midfielder. Given that, United struggled to build possession.


Solsjkaer's team also targeted the spaces between defence and midfield, by tempting Romeu or Ward-Prowse into pressing Matic or Fred, and Donny van de Beek moving infield to combine with Bruno Fernandes and create a two-on-one. If United were capable of playing forwards early, they had increased potential, but if Southampton were organised they proved difficult to break down. None of their three goals came through doing so.

United also favoured moments of transition, when they managed to create their better goalscoring chances. Southampton's defensive shape regardless remained effective, not least in how they attempted to defend the wide areas of the pitch to block crosses, and to screen cut-backs. It was via a counter-attack and at the second phase of two set-pieces that they conceded, though it was also from restarts that four of the five goals recorded were scored.

The combination of United playing forwards early, and increasing the numbers with which they attacked during the second half, increased their attacking potential. Edinson Cavani's arrival as a substitute did little to change their tactical approach, but his quality, presence and intelligence gave them a greater threat.