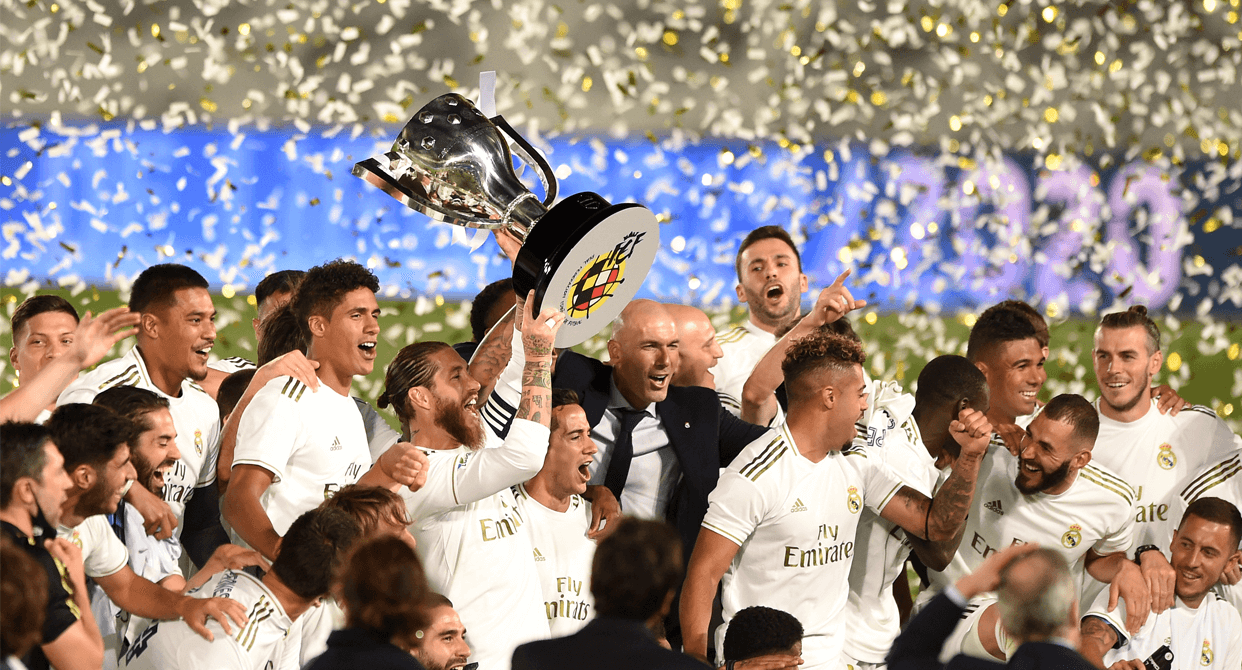 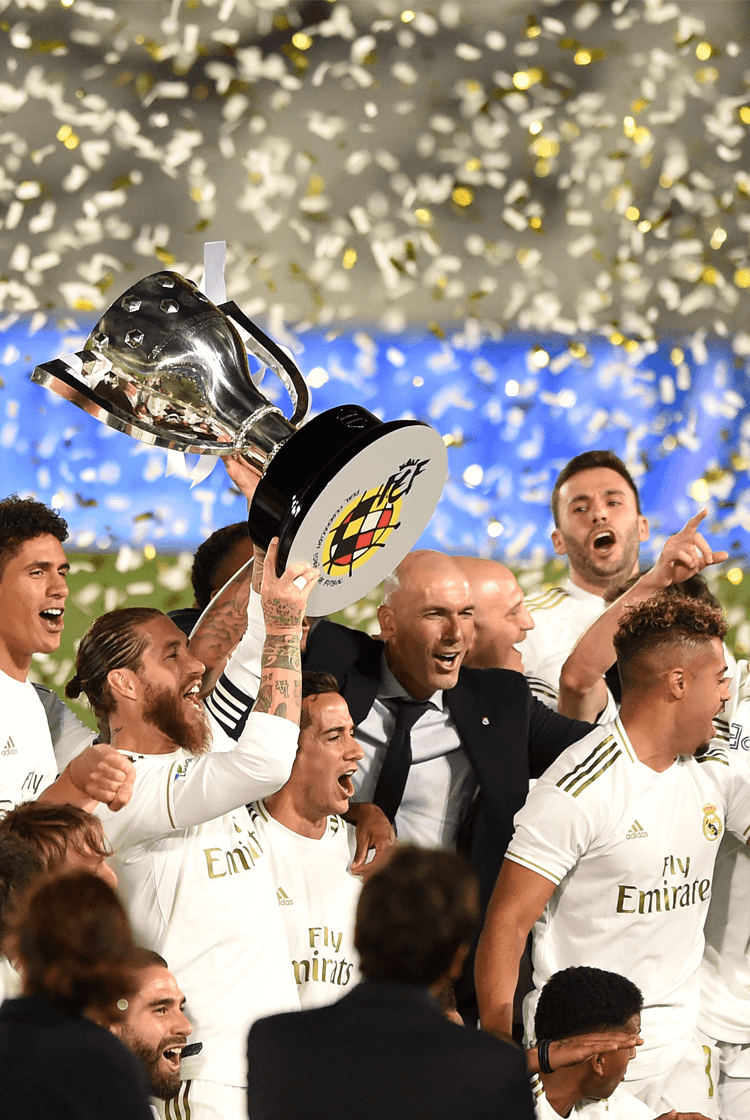 Real Madrid were crowned the Liga champions with a match to spare after beating Villarreal. Two first-half goals from the consistent Karim Benzema – the second from a retaken penalty – meant that Vicente Iborra's late header mattered little, and gave them an unassailable seven-point lead over rivals Barcelona. Their latest Spanish title is their 34th, and comes after Real won 10 matches from 10 following the resumption of the Spanish football season. "This is better than anything," said their manager Zinedine Zidane. "It takes a tremendous effort to win La Liga. "After 38 matches, you have more points than anyone else. After lockdown and everything, it's astonishing. (This) is one of the best days for me as a professional. After everything that happened, the three-month break, it is fantastic what has been achieved." 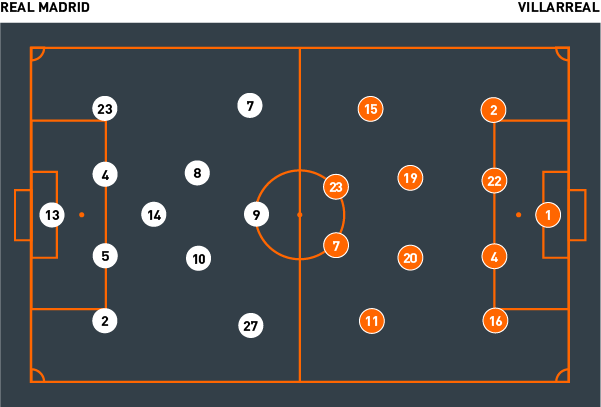 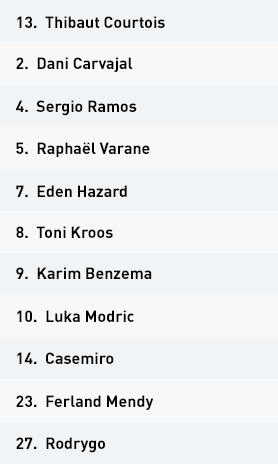 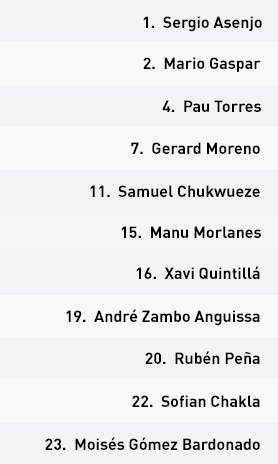 Real Madrid were organised by their manager Zinedine Zidane into a 4-3-3 formation in which Rodrygo, Eden Hazard and Karim Benzema formed their front three.  Villarreal defended with a flat 4-4-2.

The visitors' defensive aproach involved them either favouring a high press or operating in a mid-block. If applying their high press, Real had a three-on-two overload in midfield, so Villarreal's four midfielders instead operated in narrow positions to screen passes into wide areas, or sought to occupy Casemiro and to remain compact. If using a mid-block, their front two continued to press Real's central defenders, but only as they approached Real's defensive line.

With their midfield four remaining narrow, and the wider two of that four working to screen passes to either their opposing midfielders or wide attackers, Toni Kroos drifted into the left half-space to create a three-on-two overload against Villarreal's front two. His positioning as a false full-back was intended to draw his opposing central midfielders out of position, and was complemented by Hazard moving inside to create a passing lane towards him. The spacing between Kroos and Real's two central defenders also invited them to circulate possession in defence to draw the visitors' front two before switching play and then working to commit one of Villarreal's midfielders, ultimately to create space.

Real's midfielders and front three adopted fairly consistent positions. Rodrygo remained in a wider area, even if he and Hazard often switched wings; Casemiro remained their single pivot; Kroos moved deeper and occupied the half-spaces, and Luka Modric advanced to play similarly to a second striker. Hazard sought to operate inside, and in doing so invitied Ferland Mendy to advance from left-back; Rodrygo’s wider positioning meant that Dani Carvajal often made runs inside of him, but without threatening Villarreal.

Despite largely dominating possession, Zidane's team struggled to create quality goalscoring chances – it was on the counter that they scored both of their goals. Villarreal's defensive line minimised the spaces between and beyond them to make it difficult for Real to penetrate through them. There were also too few penetrative movements being attempted by Real and, given the quality they possess, they often disappointed in the final third.

Javier Calleja set Villarreal up in a 4-2-4 formation in which André Zambo Anguissa and Manuel Morlanes operated as their two central midfielders. Real Madrid used a 4-4-2, through either Toni Kroos or Luka Modric advancing to join Karim Benzema in a front two.

Villarreal attempted to play out from the back and to build their attacks from deep but they found the co-ordination of Real’s press difficult to cope with. Benzema and, most commonly, Kroos closed down their central defenders and tried to force possession wide. When it travelled to a full-back, one of Real’s wide attackers engaged their opponent. Modric took the ball-side central midfielder and, crucially, Real’s wide attacker on the other wing moved into a more narrow position to mark Villarreal’s other central midfielder. This was particularly vital because it kept Casemiro free to follow any movements from one of Villarreal's front four, and therefore preserved their back four and Real's five-on-four instead of leading to the four-on-four Calleja had sought.

The visitors had limited success in playing through Real's structure, so they instead began to play longer passes. Their front four took turns withdrawing into midfield to receive to feet with the aim of dragging a defender out of position and to create space for a long ball in behind. That their players frequently dropped towards the ball in an isolated position, with a closed body shape and limited players to set the ball to, regardless led to Real pressing them from behind and stealing possession – it was this type of error that led to Real's two goals.

Recognising this, Villarreal attempted to work the ball wide and then back to their central midfielders who had a better chance of receiving while facing forwards, allowing them to pick a more favourable route forwards. As the evening progressed, their attacking combinations improved. Their wide attackers moved inside as a central attacker withdrew, and Real’s central defenders were unable to follow the withdrawn attacker because of the threat posed by a wide attacker. If a full-back moved across to follow his opponent, and a central defender also moved, then Villarreal’s full-back advanced into the space in a three-man rotation – something that succeeded during the second half.

Villarreal's attackers also used their movements to attempt to manipulate the man-oriented nature of their opponent’s defensive approach. Typically, this involved withdrawing to towards the ball before turning and sprinting into the spaces in behind, though their midfielders struggled to play the right passes, and often overhit them. When they did manage to find a player beyond Real's midfield, they too often had too little support and they therefore struggled to find a teammate, meaning Calleja’s team struggled to create quality goalscoring chances. Their goal was a superb header that followed a cross from a deep position, instead of their chosen methods of attack.