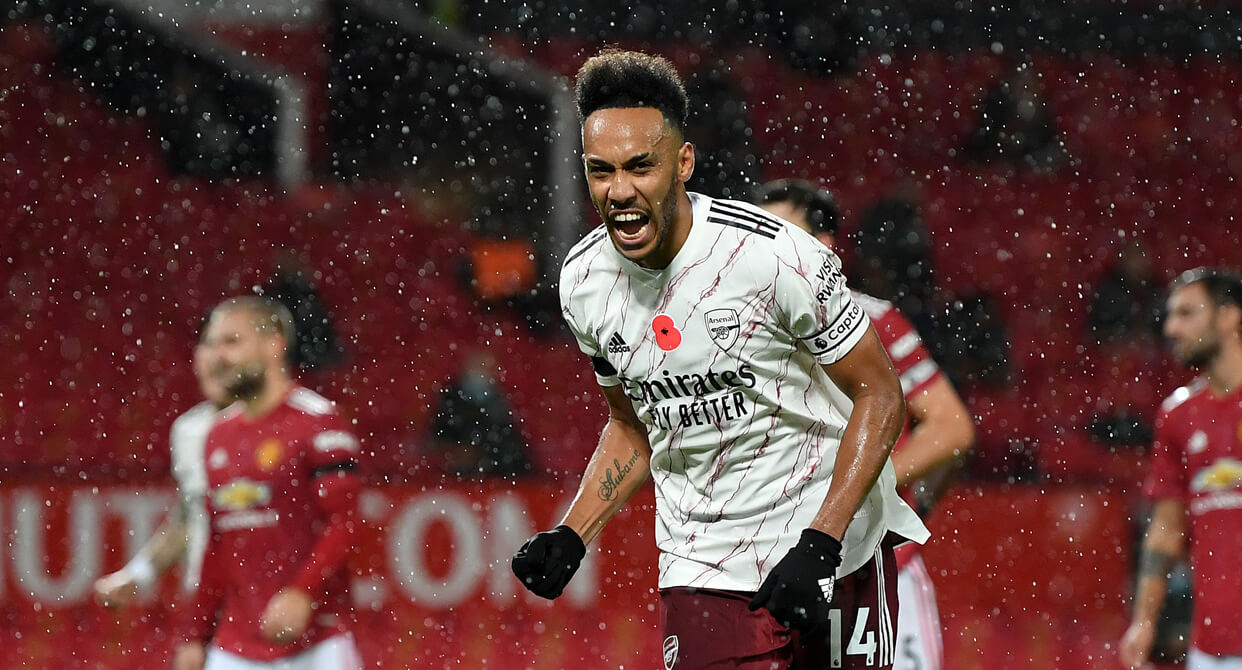 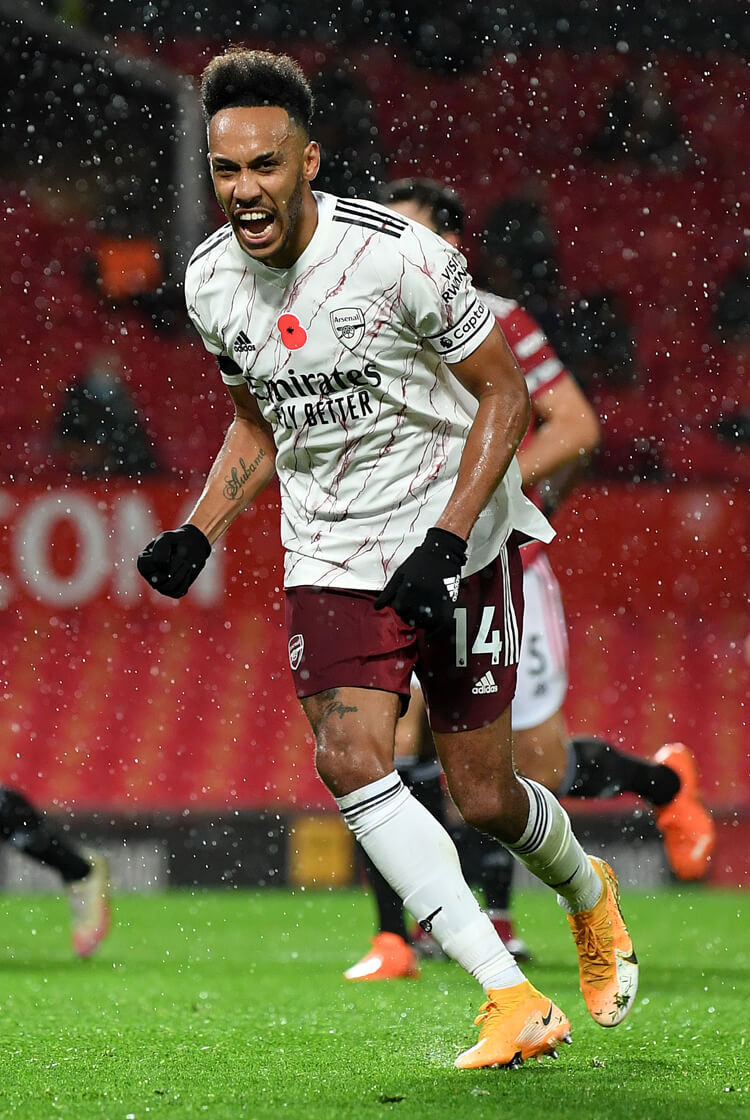 Manchester United maintained their inconsistent start to the season by following Wednesday's thumping home victory over RB Leipzig in the Champions League with a desperately disappointing loss to Arsenal in the Premier League. The visitors were the better team throughout a scrappy encounter, but required the intervention of referee Mike Dean to award a 69th-minute penalty after Paul Pogba – restored to the starting line-up – had clipped Héctor Bellerín in the box. Pierre-Emerick Aubameyang made no mistake from the spot, beating David de Gea to register his first league goal since the opening-day win over Fulham. Victory took Mikel Arteta and his team into the top half of the table, while defeat means Ole Gunnar Solskjaer and United have taken only one point from their opening four league games at Old Trafford. "We didn't turn up, especially in the first half," the Norwegian said. "That's what we have to address because we know these boys can be so good. We knew that this was the big game this week. And unfortunately in the first half we didn't play well enough." Arteta said: "I'm delighted because we played with a lot of courage and big personality. They played a really tricky formation with four midfielders and two that constantly strain your back four." 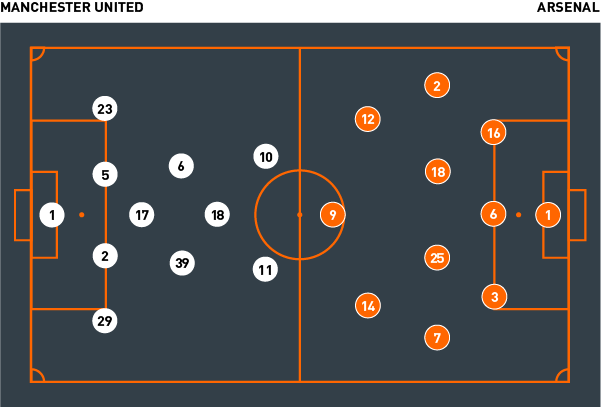 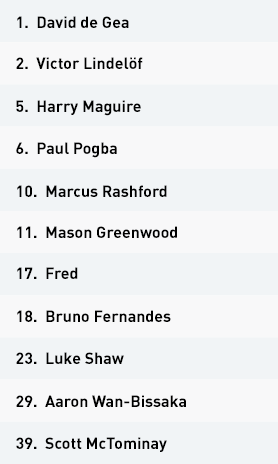 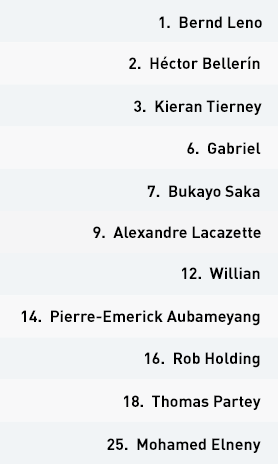 Ole Gunnar Solskjaer set his Manchester United team up in a 4-4-2 diamond formation, with Fred at the base of the diamond, Scott McTominay and Paul Pogba either side and Bruno Fernandes playing as a number 10 behind forwards Mason Greenwood and Marcus Rashford.

Visitors Arsenal employed a 3-4-3 shape out of possession, against which United looked to try to build from the back and play through their diamond structure. Arsenal set up to defend, with central striker Alexandre Lacazette picking up Fred while Pierre-Emerick Aubameyang and Willian pressed United centre-backs Victor Lindelöf and Harry Maguire.

Fernandes would look to drift and position himself in spaces as a free man, usually towards the right. The Portuguese playmaker would often drop towards Mohamed Elneny, occupying the Egyptian so McTominay could drop deeper and receive as a free player – although Arsenal adapted slightly to this by bringing Aubameyang and Willian narrower in a bid to force play outside. There was a small element of rotation between Fernandes and Greenwood as United looked to build, with Fernandes drifting out and looking to make runs beyond Arsenal’s defensive line while Greenwood dropped in to the attacking midfield position.

The nature of the diamond meant that when United attacking players received, it would often be to feet, with back to goal and pressure behind. This lent itself to players playing on different lines, making opposite movements and making blindside runs, but United too often looked rigid, and players moved in isolation rather than in any synchronised way. This, coupled with Arsenal’s compact and organised defensive shape, meant they offered very little threat – beyond their usual pace on the counter-attack – in the first half.


In the second half, Solskjaer switched to a 4-2-3-1 formation. Greenwood moved to the right and Pogba operated on the left, with Fernandes playing behind Rashford. United immediately looked more fluid and comfortable in this structure and there were more positional interchanges used to try to unbalance the Arsenal structure. They managed more touches in the Arsenal box in the first eight minutes of the second half than they did in the whole of the first half.

The positional roles of some players were slightly different in the new shape – Greenwood tended to operate as a wide-right attacker, whereas Pogba was positioned in the left half-space, allowing Luke Shaw to advance on his outside. United looked to combine around the penalty area in order to fashion goalscoring opportunities, but they continued to find themselves up against a resilient and determined Arsenal defensive line. Despite managing more final-third entries and better periods of possession in the second half, United still struggled to create anything of note and finished the game with 0.38 xG, demonstrating the lack of goalscoring opportunities.

Towards the end of the game, United’s shape was almost unrecognisable as they searched for an equaliser – and their approach play looked more hopeful than methodical. Ultimately, the solidity of the Arsenal defensive structure saw the visitors home against a team that lacked the imagination to break them down.

Mikel Arteta set Arsenal up in a 3-4-3 formation, with Rob Holding, Gabriel and Kieran Tierney operating as a back three. Héctor Bellerín, Mohamed Elneny, Thomas Partey and Bukayo Saka played across midfield, while Willian, Alexandre Lacazette and Pierre-Emerick Aubameyang formed the attack. Hosts Manchester United dropped into a 4-3-3 structure out of possession, with Bruno Fernandes joining Marcus Rashford and Mason Greenwood on the front line.

When Arsenal looked to build possession, they did so by creating a back four. Tierney pushed up as a left-back, with Bellerín on the right and Gabriel and Holding as the two centre-backs. This allowed Saka to move inside to the half-space, creating an issue for United right-back Aaron Wan-Bissaka as to whether to press Tierney, occupy Saka or stay with Aubameyang. He tended to opt for the latter, as it potentially carried the most dangerous threat and Arsenal frequently managed to access Tierney at left-back.

The hosts’ defensive shape meant that Greenwood and Rashford would press the two centre-backs, Fernandes would occupy the ballside central midfielder and the outside central midfielder – McTominay or Pogba – would release themselves to go and press the full-back should they receive possession. Again, Saka’s positioning in the half-space created a problem for McTominay on the Arsenal left, over whether to go and press Tierney or stay and occupy Saka – a dilemma that provided Arsenal with regular success when playing out.

When the visitors were looking to build their attacks, they looked to the relationship between the wing-back and wide attacker to create 2v1s against United’s full-backs and exploit these situations to advance in behind them. Arsenal would try to position one of these two players in line with the United full-back, with the other positioned outside. This would stop the full-back from moving out early and blocking off the second option, because in doing so he would leave space between himself and his centre-back for the nearest player to exploit.


Once in wide areas, Arsenal often looked to clip the ball towards the back post – particularly from right to left, where Aubameyang would try to attack the ball. The body position of the United defenders when defending these crosses was almost always facing directly towards the ball, with little to no knowledge of where the runners were heading behind them. These crosses led to some promising opportunities for Arsenal in the first half, although they failed to convert.

In addition to chances from build-up play in the wide areas, the Gunners looked to try and capitalise on individual errors from United players – two or three of which led to potentially dangerous situations they also failed to take advantage of in the first half. Eventually, it was another individual error from a United player – Paul Pogba’s clumsy challenge on Bellerín in the United box – that led to the penalty from which Aubameyang scored the winner.

Towards the end of the game, Arteta replaced Lacazette with Eddie Nketiah and pulled Willian and Aubameyang narrower in the defensive structure with a view to then exploiting any counter-attacking opportunities. This positioning encouraged United to further advance their full-backs as they chased an equaliser, which left larger spaces behind them for Arsenal’s energetic front three to attack in transitional moments. Ultimately, however, one goal was enough to secure all three points on the day for a resilient Arsenal team.