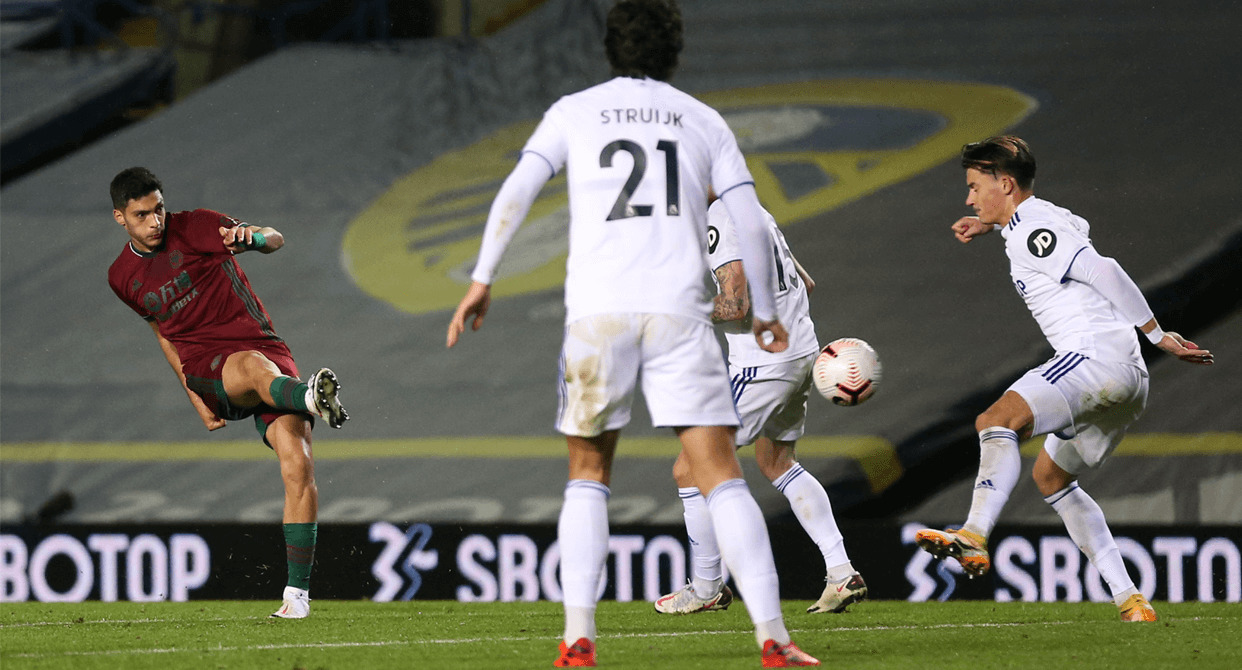 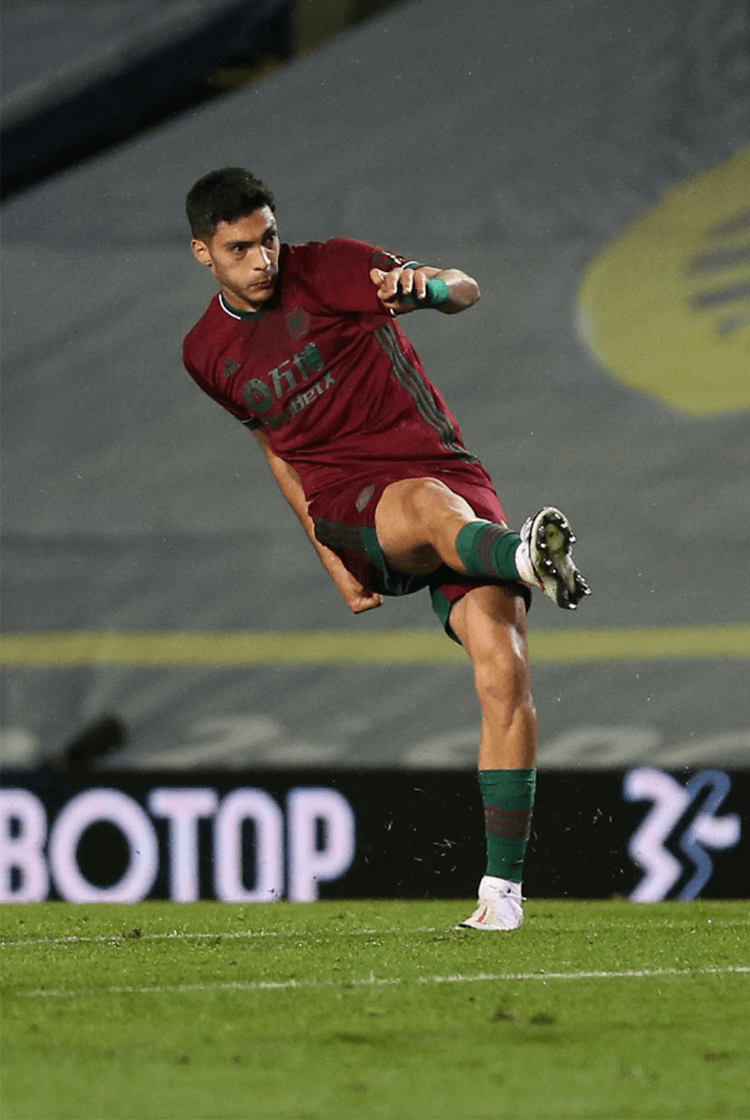 Wolves moved up to sixth in the Premier League when Raúl Jiménez's strike gave them all three points at Leeds. An encounter between the teams of two of the division's most respected managers involved them largely negating each other until Jiménez scored in the second half via a significant deflection off of Kalvin Phillips to inflict Leeds' first home defeat in 12. "In the first half we should have established a difference," said Leeds' influential manager Marcelo Bielsa. "In the second half it was more even. We had the sensation that we could unbalance them. We created enough opportunities to establish a lead. I don't think they were better than us, but they neutralised our game better." Wolves' Nuno Espírito Santo said: "It was a good performance with some aspects to improve. We were better in the second half, but at the start it was very difficult for us. They broke us, created chances; they were so dynamic. We had to adjust and be more clinical. The goal was fortunate but we had chances." 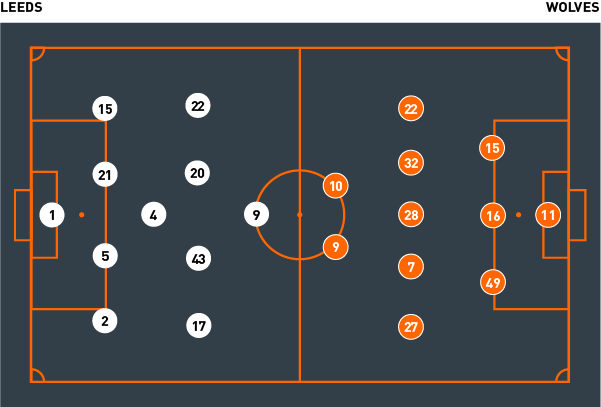 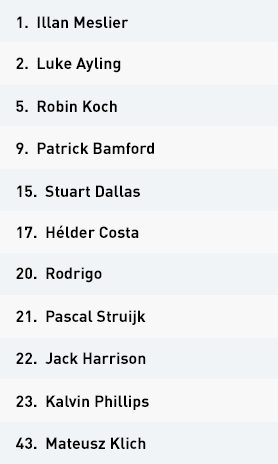 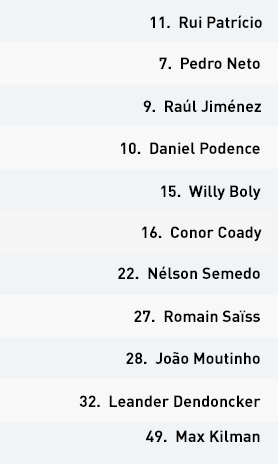 Leeds were organised by Marcelo Bielsa into a 4-1-4-1 formation in which Patrick Bamford featured as their lone striker and Kalvin Phillips as their defensive midfielder. They encountered visitors who defended with a 3-5-2.

Bielsa's team dominated possession during the first half, during which there were occasions when Stuart Dallas drifted infield to join Phillips at the base of midfield. The concentration of Wolves players in the central areas of the pitch contributed to Leeds recognising the likely difficulty of progressing possession there, so they instead favoured playing with width, and relying on their full-backs, wide attackers and attacking midfielders to combine beyond Wolves' wing-backs.

Switches of play made it challenging for Wolves' three central midfielders to cover the necessary ground, and those switches triggered their combinations, which started out as wall passes followed by a cross into the penalty area but increasingly involved a third man providing a penetrative run. Wolves responded to Leeds' early promise by adopting a 5-4-1, through their wing-backs adopting deeper positions and Daniel Podence withdrawing into midfield, giving them increased width, and the ability to negate those wide attacks and to screen Rodrigo and Mateusz Klich. The variety of Klich's movements – into the right half-space, towards Rodrigo, or deeper into midfield – offered particular potential for overloads, even if he and Rodrigo occasionally made the same movements into the same areas.


Leeds continued to offer the consistent movement that is such a feature of their approach; the five points of their attack regularly sought to make contrasting movements to test and stretch Wolves' defence, and contributed to the creation of opportunities to play possession in behind, or to play crosses. Bamford's habit of risking straying offside, to further test the opposition, on this occasion regardless involved him actually being caught narrowly offside.

Despite their dominance of possession they struggled to create quality goalscoring chances. Their movement and combinations offered potential, but ultimately too little end product.

Wolves started with a 3-5-2 formation but their manager Nuno Espírito Santo demanded they reorganise into a 3-4-3 during the first half. Leeds confronted them with an aggressive man-oriented approach that involved them having one fewer player in the first line of their structure, and one additional player in defence.

Leeds sought to negate the overload that existed in the final third through Patrick Bamford occupying Conor Coady, the central figure in Wolves' back three, and Rodrigo or Mateusz Klich pressing the in-possession central defender; with the four-on-four that existed in midfield, Leeds also had a four-on-three in defence. Their aggression made it difficult for Wolves to play through them, and Wolves' attempts at attacking during the first half – their desire to bypass midfield often left Coady playing long, diagonal passes towards their front three – therefore came to little.

Wolves' isolated and overloaded attackers were increasingly reliant on their technical qualities. It was a long pass, complemented by the abilities of Raúl Jiménez, Pascal Struijk's slip and a deflection off of Kalvin Phillips, that led to their winning goal. Daniel Podence and Pedro Neto were encouraged to remain close to Jiménez, but to operate on different lines to encourage combination play, and their narrow positions invited Nélson Semedo and Romain Saïss to advance from wing-back, and Leander Dendoncker to offer penetrative runs from midfield.


Leeds’ aggressive defensive approach led to numerous set-pieces that Wolves struggled to take advantage of. Santo's team was also frustrated by their hosts' effectiveness during transitions, when Wolves' shape and mobility suggested they would pose an attacking threat.

Even when Jiménez scored, Leeds had nine players defending behind the ball following the transition. Only the deflection off of Phillips took Jiménez's strike past Leeds' goalkeeper Illan Meslier.