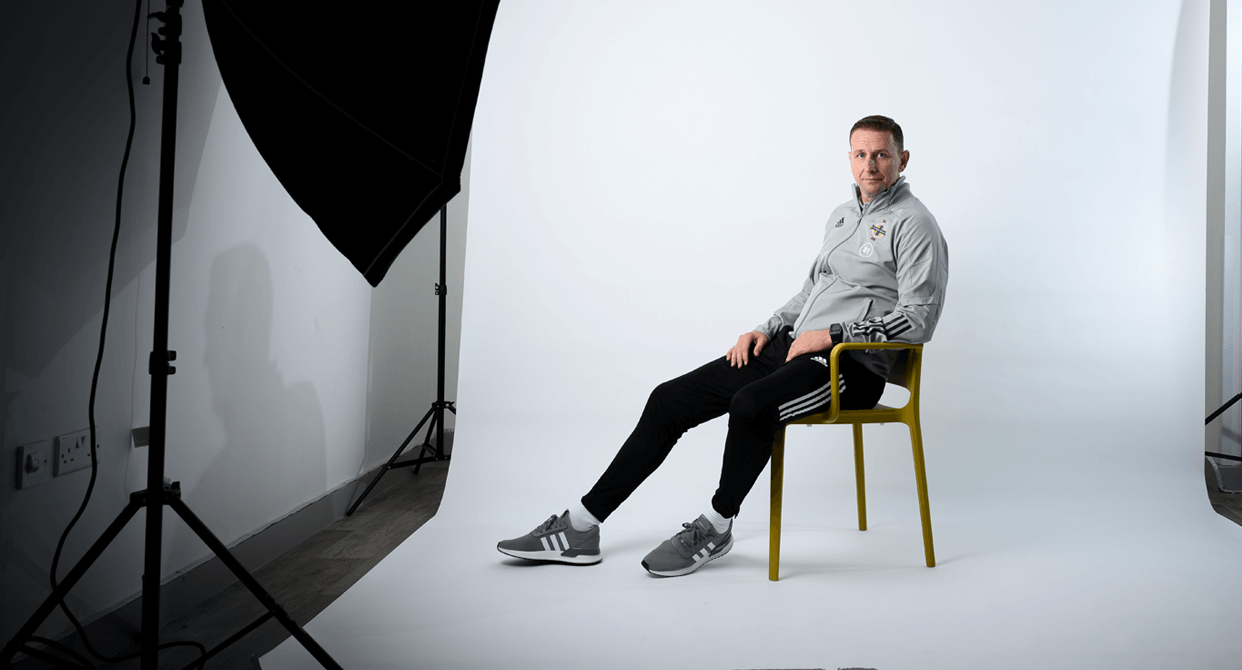 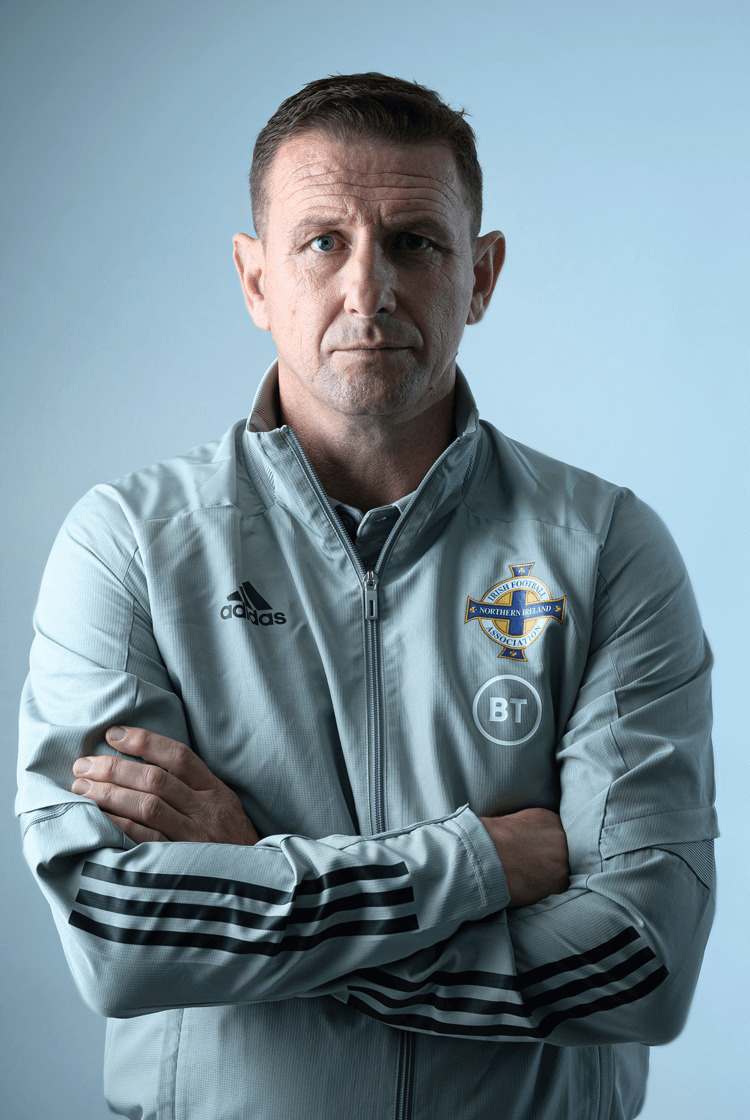 “Why do you want this job? We don’t win football games at this level.”

That was the first question I was asked at my interview for the Northern Ireland Under-21s job.

“We’re in the bottom seedings in the under-21 set-up,” they told me. “We’ve only won one home game in six years and we haven’t won an away game in more than seven years.”

The truth was I just couldn’t resist the challenge.

It was a fact-finding mission to find the best players at that level. There were players all over the place to go and research – most of them not playing first-team football.

But there was some talent in there, and I set about creating a team that had solid defensive shape but also with the foundations to allow the players to express themselves.

And, just like the senior team that Michael O’Neill was so successful with, hard work, commitment and organisation were crucial.

I was left to make my own decisions. Michael (below) and the senior management didn’t tell me I had to play a certain way. I was able to find a way of playing with the players I had. And we just clicked.

“When we went to Spain, I told my players we were going there to win”

We had a really successful first campaign. We beat Iceland away from home in the last minute. We beat Slovakia at home. We had loads of good results.

But the standout was away to Spain in September 2018.

We’d played them at home six months earlier and tried to attack them just a bit too much. We lost 5-3.

They had a lot of real quality. Dani Ceballos, Adama Traoré, Pablo Fornals and Mikel Oyarzabal were all playing. Some of them were playing first-team football in La Liga at the time.

We managed to hold them to 3-3 until 15 minutes to go. It gave the players real belief about what they could do as a team.

So, when we went to Spain to play them again, I told my players we were going there to win.

You could see some of the players were unsure, but they bought into what I was saying.

We planned for more or less every eventuality, and yet we were thrown into a situation we hadn’t expected: we went 2-0 up inside eight minutes.

We had to be incredibly well organised defensively, and we were. Spain scored a late goal, but we held on and won 2-1.

It was a night that none of us will forget. It gave us huge belief as a group of players, and also gave me added belief in my own ability. When everyone sticks together and does their job, anything is possible.

That’s something that the senior team have showed under Michael O’Neill in recent years. I’ve learned a lot from him ahead of taking the job.

I still have a hell of a lot to learn. I love what I do and I just want to get better at it. I’d found out as a player that improvement requires real hard work.

I was never someone who just wanted to get training out of the way when I was playing. I had to work at my game to make myself better. And I really enjoyed it.

I listened carefully and always took in what coaches told me, largely because I always understood the reasons behind them telling me to do certain things. That side of the game came naturally to me.

“It was a great time for me, because I got a crash course in coaching and learned all sorts from Nigel Adkins”

David Pleat was a real inspiration on the training ground. He put a lot of time into me and my striker partner at Leicester, Paul Kitson, telling us how we could help each other out with our runs, and I really appreciated that.

I learned a lot about man-management from Sam Allardyce at Notts County – he was incredible with how he got the best out of players, and he was meticulous in how he organised his team. Everyone knew their job – if you didn’t do yours well, you knew your position was under threat.

Ray Harford was completely obsessed with football and taught me loads in our short time together at QPR (below). He had been assistant to Kenny Dalglish at Blackburn when they won the Premier League in 1995. You listen to people like that.

At Mansfield, Andy King taught me about letting the players enjoy themselves. Later in my career at QPR, Gerry Francis and Ian Holloway were very influential, too.

It was around that time that I started thinking about life after playing. I took a physiotherapy course and then did my coaching badges alongside playing. I was learning all the time. Taking in the good and the bad.

Then Nigel Adkins gave me an opportunity as player-assistant manager at Scunthorpe, alongside my teammate Andy Crosby. We were the two senior pros there and Nigel trusted us.

“I probably should have turned the Scunthorpe job down. I just wasn't ready”

We took sessions and played in them; we were still in the dressing room while part of the management. It was very hard work, but I never really thought about whether it would lead to anything.

It was a great time for me, because I got a crash course in coaching and learned all sorts from Nigel – in particular about opposition analysis, match preparation and how important it is to stay positive.

He did such a good job that Southampton came in for him. He was only allowed to take one of his assistants with him, and Andy went. The Scunthorpe chairman wanted a bit of continuity with Nigel’s regime, so he didn’t want to lose all three of us in one go – so he offered me the manager’s job (below).

At first, I didn’t want it. I just wasn’t ready.

Ideally, I probably should have turned it down, taken a route through coaching a youth team and worked my way up. Instead, I took it and, with hindsight, being thrown in at the deep end helped me in the long run.

“I didn't know the Sligo job was up for grabs. I didn't even know where Sligo was!”

There was no expectation we’d stay in the Championship that year. We were a selling club. We’d made a good deal of money selling players like Billy Sharp, Andy Keogh and Martin Patterson over the years, and then Gary Hooper left for Celtic in the summer of 2010, just before Nigel left. It was always going to be tough in that league.

We fought relegation off for as long as possible and got some really good results along the way – but in March we were in the bottom three, and I was sacked.

I thought I’d be given time to rebuild back in League One, but it wasn’t to be. It was a harsh lesson for me in the brutal world of football management.

I had to dust myself down and find my next job. I stayed in the game, and was doing some analysis work for Watford when a phone call came out of the blue. It was an agent working for Sligo Rovers.

I didn’t know the Sligo job was up for grabs at the time. I didn’t even know where Sligo was!

I went over there to check the club out in the middle of the week and was offered the manager’s job on that trip. The season was starting on that Friday, so I only had a couple of days to prepare.

Paul Cook was the previous manager, and he’d left for Accrington. He’d put together a good team that had come close to winning the league but just hadn’t got over the line. I tried to build on the good work he’d done.

Sligo was a full-time club, but there was a part-time mentality about the place. I had to educate people there to be a bit more professional, so that training was set up properly and we did things well.

“We had untold success. In 2013/14, I was the only English manager in the Champions League”

It wasn’t easy, though. Lots of the players were on 40-week contracts, and they had to spend the 12 weeks until the new season picking up the dole. Then they would find out if they had a contract for the new season.

Players were leaving for €50 a week extra because that was a significant amount of money at that level. I had to convince players to move from Dublin, sometimes with young families. It was a great insight into how to treat players.

We got the season off to a good start and the momentum started to build. We went on a great run, and after a bit of a wobble towards the end, held on to win the league with two games to go.

It was Sligo’s first league win for 35 years and they haven't won it since. Even though football is only the fourth or fifth most popular sport in Ireland, the town went absolutely mad. Everyone in Sligo turned up to the games, and the Irish certainly know how to celebrate. It was superb to be involved in.

It gave me a thirst for the bigger stage, and I went to Motherwell, where I thought I did a good job.

I was told to keep the club in the Scottish Premiership, which I did, after beating Rangers soundly in the relegation playoff: 3-1 at Ibrox and then 3-0 at home.

It was then a rebuilding job, with lots of young players in the squad – players who have since gone on to be very successful – but I was only given eight league games of the new season and was sacked after I gambled by resting players in the cup. I paid the price for taking that risk.

I took some time to consider what I wanted to do, and spent some time as a number two at Oldham. Even then, I could never have imagined that I was going to be an international manager at senior level, let alone an under-21 manager.

I’d never had the ability as a player to play internationally, so my name was never going to get me a big job. I had to earn my stripes. Clearly I did that sufficiently to get the opportunity with the Northern Ireland Under-21s.

The fans are a big part of what drew me to the Northern Ireland set-up. I saw them at Euro 2016 (above), and who wouldn’t want to be a part of something like that?

They travel all over watching their team, cheer them on until the 95th minute whatever the score. They are infectious, and the players feed off their support.

This Northern Ireland team have shown what is possible when you have a fanbase like that behind you.

I’m relishing the chance to be a part of it.