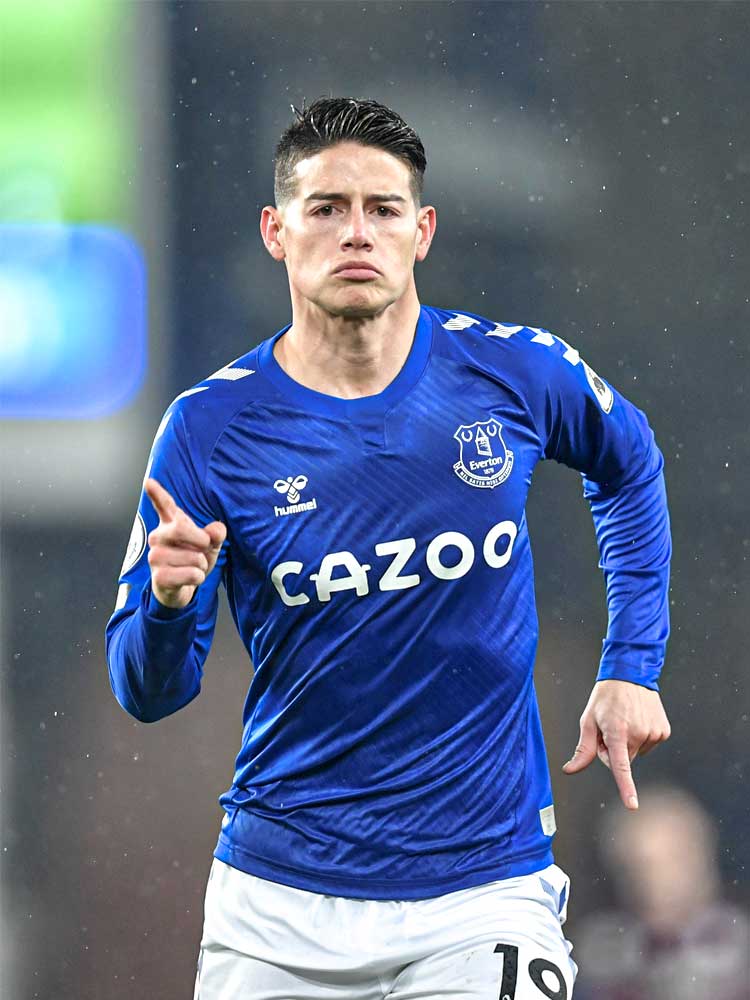 Profile
In their ongoing battle to break into the Premier League’s top six, Everton made a real statement of intent when signing James Rodríguez from Real Madrid in September 2020. By reuniting the Colombian – a true global superstar – with Carlo Ancelotti, a manager with Champions League pedigree, Everton hoped they finally had the quality to compete consistently for European qualification.

Six years had passed since Rodríguez was the leading goalscorer at the 2014 World Cup, a tournament at which he scored one of the competition’s greatest ever goals. His performances inspired Real, then managed by Ancelotti, to recruit him for £71m and, in doing so, make the then 23-year-old the fourth most expensive player of all time. Having later played under Ancelotti at Bayern Munich, the two know each other well. “James is a fantastic player with a lot of quality and a lot of ability to make assists for the strikers,” Ancelotti said. “If they (the striker) do not score at least 20 goals each they can have a problem with me.”

Tactical analysis
Rodríguez strikes the ball exceptionally well, whether shooting, passing, or crossing. He is effective when shooting from a central position but is best at doing so when just outside the penalty area and in the inside right channel. He favours shooting while relatively stationary rather than running at speed, after delicately pushing the ball out of his feet, and will usually attempt to place his shot outside the line of the post – and so out of the reach of the goalkeeper – with enough curve forit to bend back inside the far post.

That technique changes the further he is shooting from goal; where from closer range he favours bend and finesse, from further out he hits through the ball with his laces and has such good technique that he retains accuracy when shooting from range. He is quick to shoot after receiving a pass, which helps him to elude the attentions of opponents and prevents them from blocking many of his shots. The timing of his movement also helps – he moves just as he sees a signal from a teammate that a pass is coming his way, and then either shoots first time or having taken just a single touch.

From further out, Rodríguez is most dangerous with through balls from the inside right channel for runners off the left or through the middle, and he is also skilled at lifting passes to evade defenders. That ability extends to his crossing, and he is similarly potent and accurate from dead balls.

When crossing in open play, he prefers to cut inside his opposing left-back and deliver deep crosses towards the far post (below), and he frequently makes use of a teammate making a run around the outside to draw a defender away from him and create space to cross. Even if there is only minimal space to aim at, Rodríguez has the potential to test the opposition with his crossing via teasing balls aimed into the space between the defenders and goalkeeper.

He has far less influence when his team is without possession. Though he is capable of quickly covering ground and displays tenacity in his tackling, Rodríguez struggles to change direction quickly enough to keep pace with opponents who manipulate the ball well, and so he rarely gets close enough to the ball to break up attacks. He shows admirable defensive awareness for such an attack-minded player – despite questions being raised throughout his career about his willingness to work hard without the ball – but his attempted interceptions and tackles delay rather than stop attacks, so he is more suited to playing a passive role out of possession than being proactive in trying to win the ball.

Role at Everton
Rodríguez shot to stardom with his performances in the number 10 position in Colombia’s 4-2-3-1 at the 2014 World Cup, but as football evolved and traditional number 10s have become less common he has had to adapt. Much like many other great creative midfielders, Rodríguez has found he has been used far more from a wide midfield or wide forward's position than in his preferred position in the hole.

That has again been the case at Everton, where Rodríguez has played almost exclusively on the right of the front three in the 4-3-3 Ancelotti has favoured since the Colombian’s arrival. The fact Rodríguez has not been used on the right of a 4-4-2 – the formation Ancelotti used most in 2019/20, the season before Rodríguez joined – is perhaps a sign that the manager wants Rodríguez to focus as much as possible on attacking.

In their 4-3-3, Rodríguez has the security of three combative central midfielders behind him, giving him more freedom to attack and exert an influence with the ball (above). He has also been stationed up front in a 4-4-2, with instructions to drop deep, but when Everton play in a 4-2-3-1, Ancelotti has preferred Gylfi Sigurdsson as their number 10, because Sigurdsson's defensive capability gives him the edge when there are only two central midfielders behind them.

In their 4-3-3, with the left-footed playmaker Rodríguez on the right and the right-footed, ball-carrying, fast Richarlison on the left, Everton attack with an asymmetrical shape. Rodríguez will move into central positions between the lines to try to create with his left foot, and Richarlison will try to run beyond the opposition’s defence more regularly (above). When Richarlison does collect the ball in front of an opponent, he will often try to dribble; Rodríguez’s game is all about combining with teammates to pull the opposition’s shape apart and create gaps to pass through – often for Richarlison to exploit.

With Dominic Calvert-Lewin leading the line and Richarlison moving alongside the striker at every opportunity, Ancelotti prefers his team to get into positions from which crosses can be put into the penalty area because of their significant aerial presence. Lucas Digne provides whipped, outswinging crosses often from a withdrawn position, and on the right, Seamus Coleman gets forward consistently from right-back, and tends to try and cross from nearer the byline. Rodríguez, instead, uses Coleman’s runs to find space in the inside right channel, from where he is capable of putting vicious whips on his crosses, meaning that as they curl towards goal they can sometimes only require a glancing touch from a teammate.

There is no traditional 10 in Ancelotti’s Everton, but Rodríguez is encouraged to move infield and try to find pockets of space between the lines. He makes clever movements by pushing up alongside their other attackers and then dropping in behind the opposition’s midfield – where they can’t see his movements – to receive a pass, turn, and play a through ball for a runner (above).

Those positions are exactly the kind in which Rodríguez has done his best work throughout his career and where he feels most comfortable. The more he can be found between the lines, the greater his impact at Everton will be.