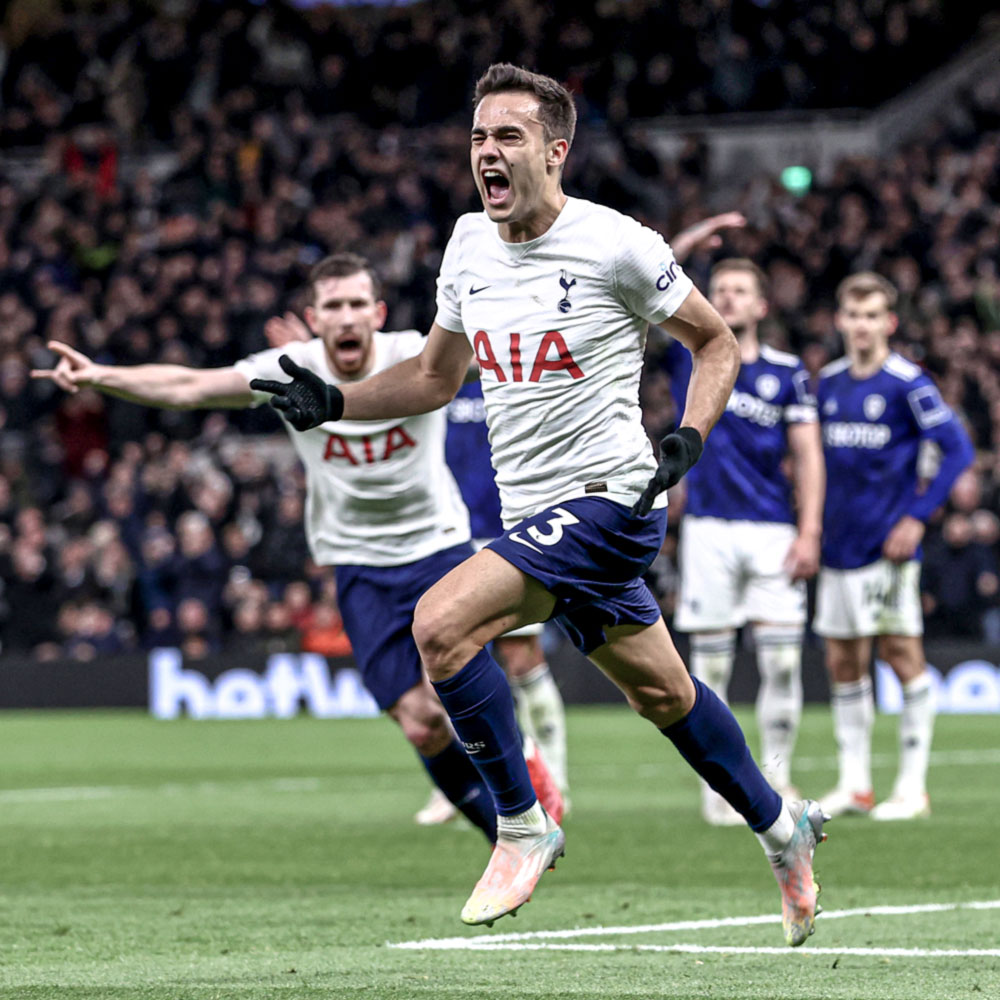 Antonio Conte won his first home Premier League game in charge of Tottenham thanks to a second-half comeback against a Leeds team still missing key players through illness and injury. Marcelo Bielsa was without key men Raphinha, Rodrigo and the still-absent Patrick Bamford, but his team dominated the first half and took a deserved lead through Dan James' first goal for the club just before half-time. Spurs were much improved after the break, and goals from Pierre-Emile Hojbjerg and Sergio Reguilón – his first for the club – earned the hosts a very welcome three points to move into seventh in the Premier League.

"Leeds, in the first half, they played very well, with intensity, were aggressive and won a lot of tackles," said Conte after the game. "In the second half we changed the plan tactically, and I’m pleased because I had a good answer from players." Bielsa was sanguine in defeat: "Even with our absences, we played the way we wanted to in the first half. But not being able to play that way in the second half was a problem."

High number 10s
Harry Kane’s movements into deeper areas from the number-nine position in Tottenham’s 3-4-3 was combined with the two number 10s, Lucas Moura and Son Heung-min, moving forward in central areas. Leeds defended in a 4-3-3 using Marcelo Bielsa’s man-marking system, so Kane dropping into midfield (below) dragged one of the defenders out of the back line and created gaps for Son and Moura to move into. They looked to receive in these spaces, and the wing-backs moved high to give passing options around the outside of Leeds’ back line. Double pivot Harry Winks and Højbjerg provided security and support underneath the ball, and looked to get the ball to the two number 10s whenever they could.

Deep double pivot
The deep positioning of Tottenham’s double pivot dragged Leeds’ number eights further from their defence, creating spaces between the lines. One of Leeds’ centre-backs was then forced to step up and support the defensive midfielder, creating extra space for Son and Moura to receive in. Whenever Kane remained higher (below), Son and Moura dropped to provide a central link between him the deep double pivot. With Winks and Højbjerg dropping so deep, Tottenham’s wider centre-backs, Ben Davies and Japhet Tanganga, could push forward into space, with wing-backs Emerson Royal and Sergio Reguilón pinning the visitors’ wingers back.

Committing numbers forward
Tottenham were bold in their approach, particularly in the second half. Along with more pressing and an aggressive out-of-possession approach, Tottenham also committed more players forward when they attacked. This forced Leeds into a low block for longer periods, as they continued to use their man-marking system. With the wide centre-backs able to move higher, Tottenham’s wing-backs got high enough to provide more numbers in the final third, and even in the penalty area (below). With a strong presence inside the penalty area, one of the two 10s could drop back and look to receive away from Leeds’ back line.

The positioning of Tottenham’s wide centre-backs also dragged one of Leeds’ central midfielders into wide areas, which created even more room for one of the two 10s to receive. The double pivot remained in place to protect central areas and provide support behind the advancing centre-backs when needed. However, in the moments when the wide centre-backs stayed back and the wing-backs stayed wide, the double pivot supported slightly higher, keeping the 10s closer to Kane. It was this shape that led to Spurs’ equaliser.

Back line stepping forward
Whenever passing options were limited by Leeds’ man-marking system, Tottenham’s defenders took the opportunity to drive into midfield with the ball. Eric Dier often found central space to move into from the heart of the defence, especially when the double pivot moved away from the ball and pulled Leeds’ number eights into the inside channels (below). Dier would step out before looking to feed passes into Moura or Son, or out wide to the wing-backs. When Dier stepped in, the Leeds player who was marking Winks or Højbjerg then moved on to Dier, creating a free player in the double pivot. When this happened, the wider centre-backs held their positions and the deeper of the double pivot – usually the one whose marker had moved on to Dier – dropped in to create a temporary back three behind the ball.

Attacking shape caused problems
In the first period, Leeds set up in a 3-3-1-3 in possession. Pascal Struijk moved forward from left-back, leaving a temporary back three with Kalvin Phillips in the middle. Left-sided number eight Mateusz Klich moved forward to join Joe Gelhardt high up, while right-sided number eight Stuart Dallas moved wide and Adam Forshaw remained as the single pivot. Wingers Jack Harrison and Dan James stretched the pitch by holding their wide positions, which pinned Spurs’ wing-backs. That meant that, whenever Son jumped out to press from Tottenham’s 5-4-1 mid-block, space opened up for Dallas to receive and progress into (below). This right-sided build-up proved key, as did switches out to the left.

Wide pairings threatened
Leeds had joy down their left side towards the end of the first half, with one-on-ones important for Harrison on that flank (below). When he beat his opponent, Tottenham’s back line was forced to move across, creating more room for central runners. This is exactly what happened for their goal, when Harrison crossed for James to finish. Struijk didn’t support as high as on the left as Dallas did on the right, though, as the converted left-back had to move forward from a much deeper starting position. So, on the right, James had more consistent support from Dallas. However, when Struijk did get forward to support Harrison, Leeds’ left side looked threatening.

Change of shape
Leeds converted into a 4-3-3 shape when they attacked in the second half, because they did not have enough of the ball for long enough to convert into a back three. Tottenham pressed more and committed more men forwards, so Leeds’ players had to track back deeper into their own half and could not keep the ball as well as they did in the first half. Phillips was pushed into midfield, and the midfield three initiated attacks with balls out towards the wingers (below). However, unlike in the first period, Leeds were too reliant on individual creativity from the wide players. With Tottenham’s back line converting into a five when defending, Leeds often lacked support close to the ball to create as effectively as they did in the first half.

Leeds struggled in attack as the game wore on
With Leeds attacking from their 4-3-3 shape, the wingers were often supported by the number eights, with substitute Tyler Roberts, Dallas or Phillips supporting through the inside channels. Whenever the wingers made diagonal runs inside, space opened up on the flanks. On the right, Dallas took every opportunity to run into that space, while on the left, Junior Firpo – introduced on the hour – looked to overlap from left-back (below). Firpo, Harrison and Joe Gelhardt rotated well on the left to help Leeds progress down that side, and Roberts fed balls forward on that side. However, as the game became more stretched, Leeds were left out of shape, and Tottenham threatened on the break. After Spurs took the lead, their five-man defence and deep double pivot sat back. Leeds were unable find a way through.