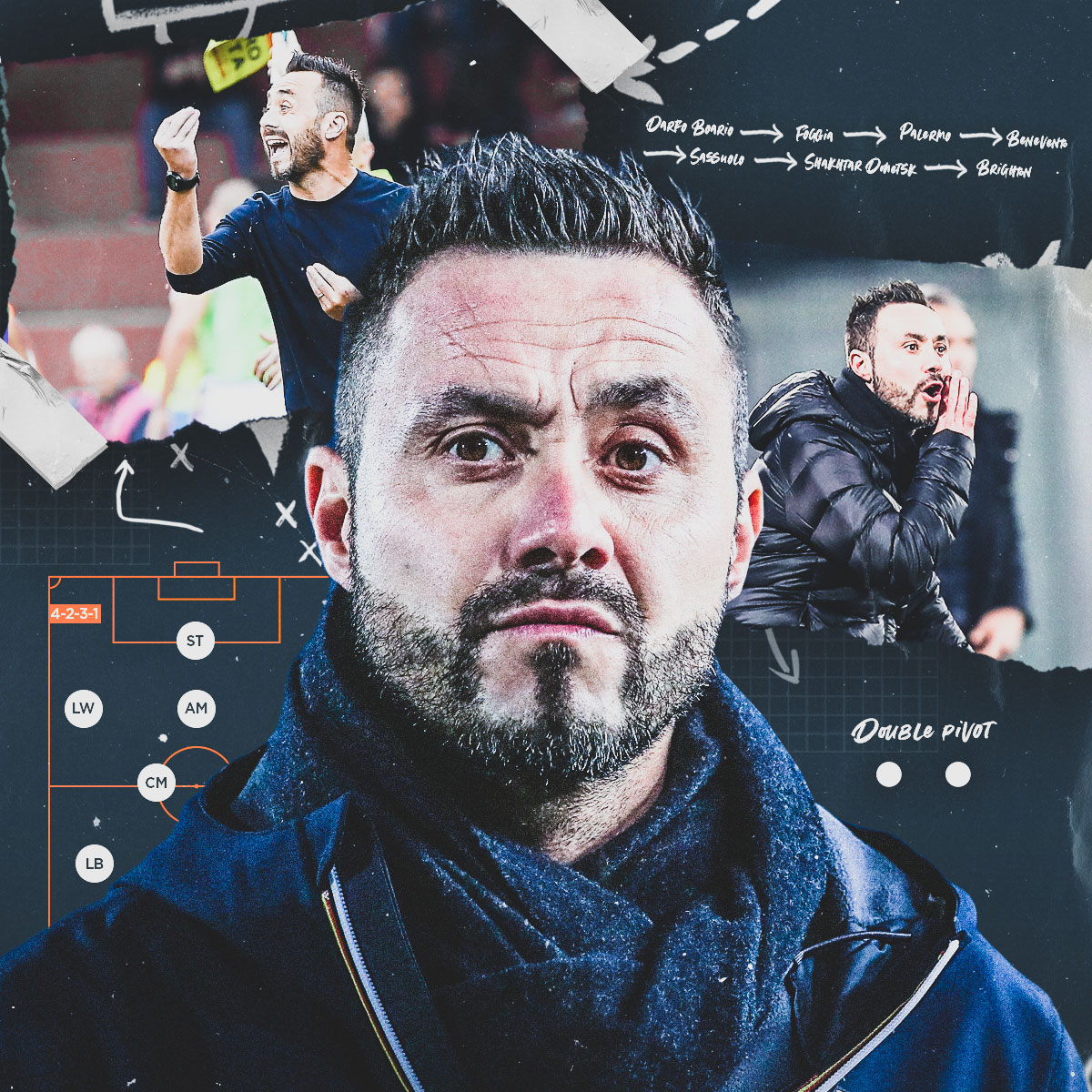 Graham Potter had been linked with so many high-profile jobs while manager of Brighton that it would have come as no surprise to the club when Chelsea came calling in September 2022. As a result, Brighton chief executive Paul Barber and chairman Tony Bloom had long been thinking about who would be his team's next manager. So it followed that the highly-rated Italian Roberto De Zerbi was appointed just days after Potter's departure was confirmed.

De Zerbi has worked his way up to this appointment, with his work at Benevento earning him a move to Sassuolo in 2018. In his three seasons there, he helped establish the team in Serie A with some eye-catching and high-scoring football. His impressive work there led to him being given the Shakhtar Donetsk job, and a brief foray into the Champions League. Ultimately, it was only due to the war in Ukraine that he left that job. De Zerbi is something of an unknown quality to English football, but Brighton certainly have an exciting new manager on their hands.

"We've been particularly impressed by what Roberto did with Sassuolo, where he achieved successive top-half finishes with a relatively small club," Barber said after the appointment was confirmed.

“It’s no secret our chairman is constantly monitoring potential coaches across the world as part of our succession planning, but Roberto was our number-one choice and the only candidate we spoke to. We feel Roberto is the ideal cultural and technical fit for Brighton & Hove Albion, and the right person to continue the club’s progress and work with this outstanding group of players.”

De Zerbi likes his teams to play a possession-based style of football, focusing heavily on shorter build-up from the goalkeeper. His Sassuolo side recorded the highest possession share in Serie A in 2020/21 – when they missed out on qualification for the Europa Conference League only on goal difference – and the third-highest in 2019/20. In the disrupted Ukrainian season of 2021/22, De Zerbi’s Shakhtar Donetsk also came out on top for possession. He has used a 4-2-3-1 structure in his most recent jobs, with the exception of a 4-3-3 at the beginning of the 2018/19 campaign, shortly after taking over at Sassuolo. The double pivot is key to his teams’ deep build-up.

Both at goal-kicks and in open play, De Zerbi places the double pivot deep in an attempt to draw the opposition high up the pitch (below). His side then looks to play short, further encouraging the opposition to press, before working the ball around the outside and usually looking to find the full-backs, who hug the touchlines. The goalkeeper acts as a third centre-back during this build-up, allowing the full-backs to push further forward. After the ball goes wide, it is then reversed back into the centre-forward or number 10, one of whom will have come towards the ball. The deep position taken up by the double pivot creates space in the centre of the pitch for the centre-forward or 10 to receive, with the wingers placed high and wide to pin the opposing full-backs.

This space allows the centre-forward and number 10 to rotate freely, and also for one of them to receive a direct ball over the opposition press from the goalkeeper or a centre-back. De Zerbi prefers his teams to keep the ball on the floor, but he is happy for them to play over the opposition if this is their best route out from the back.

Should the opposition fully commit to a high press and push an extra player higher to deal with De Zerbi’s in-possession use of his goalkeeper, then the clipped pass over the press is an option. Therefore, the players in his defensive line need to have the ability and confidence to receive under pressure close to their own goal. Equally, his attackers must be able to pin central defenders and hold the ball up with their back to goal.

Once his team has advanced into the opposition’s half, De Zerbi wants his players to occupy each of the spaces between and outside the players in the opposing back line. This usually involves a front line of five (below), with wide rotations providing support in advanced areas for the centre-forward and number 10. With De Zerbi’s teams dominating the ball for long periods, the opposition will often drop into a deeper block, so his teams' attacking play often requires intricate combinations in tight spaces. His teams only really attack at pace when they have drawn the opposition out and successfully broken their press, or after a regain through counter-pressing.

The double pivot supports underneath the ball, taking up positions that allow them to cover in the wide areas and allow the full-backs to advance. Attacks make use of both overlapping and underlapping runs, with De Zerbi’s wingers able to drive around the outside to cross or cut inside before targeting the far post with an inswinging cross or shooting directly at goal. He tends to play with wrong-footed wingers – examples in his teams include Domenico Berardi, Jérémie Boga, Tetê, Manor Solomon, Pedrinho and Marlos. They provide a direct goal threat, and will move into the inside channel when play builds on the opposite flank.

This means that the inside channels are always occupied, giving support to the nine and number 10, and offering potential for close combinations to break through the opposition’s last line. It also gives the team the potential to overload the opposition’s centre-backs close to goal. With the defence narrowing to deal with the numbers De Zerbi’s team has in the centre of the pitch, space appears for the overlapping full-backs out wide. When a winger stays wide – and in doing so pulls the opposing full-back away from the centre-back – De Zerbi’s full-backs are encouraged to make underlapping runs into the space between opposition full-back and centre-back.

With the double pivot remaining in place and plenty of numbers committed to attacks, De Zerbi’s sides aggressively counter-press in central spaces when they lose the ball.

Sassuolo pressed very aggressively under De Zerbi, and Shakhtar used a similar approach. From their 4-2-3-1 structure, the number 10 covered the opposing pivot, and the centre-forward pressed across the pitch with the aim of locking play on one side of the pitch. The wingers narrowed and pressed inwards. Where possible, they forced the ball into the centre of the pitch, where De Zerbi likes to deploy aggressive ball-winners.

The double pivot is primarily a defensive screen, but whenever an opposition central midfielder dropped, one of the double pivot was free to follow (below). The full-backs were also expected to jump forward to press out wide. As a result, De Zerbi requires extremely athletic players in those positions.

With the central areas key to De Zerbi’s aggressive pressing, the central defenders will happily follow a centre-forward who drops into deep positions. One of the double pivot will fill in at centre-back when needed, while they are also tasked with tracking opposing midfielders who make penetrative runs through the heart of his team.

It is a front-footed out-of-possession approach, but one that is varied and adaptable on a game-to-game basis depending on the opposition.

Conceding too many chances

Despite encouraging his sides to defend with an aggressive and intense press, his teams – in particular Sassuolo – concede too many chances. In 2019/20, Sassuolo had the seventh-worst defensive record in Serie A despite finishing eighth in the table, also conceding the most headed goals in the whole league. The previous season – 2018/19 – Sassuolo finished 11th, but conceded the fifth-most goals in the league. His attack-minded football brings goals, but with that comes too many chances at the other end of the pitch. This is something that needs to improve at Brighton.

Opponents often had success in wide areas, attacking the space left by the full-backs who had jumped forward to press high. This is at least part of the explanation for the high number of headed goals they conceded. Even when they didn’t move out far and the winger worked back to press the ball from behind, Sassuolo’s inside channels were vulnerable to penetrative runs from opposition midfielders. They conceded a significant number of goals following these runs and early crosses into the area (below). This problem was exacerbated when a member of the double pivot moved out to support a high press or attempt a regain in midfield. Sassuolo ran into difficulties when the opposition played around their high press and then quickly back inside, into the space the double pivot had left.

With the full-backs ready to jump out whenever there was a chance – and often trying to steal a yard or two by moving early to anticipate a pass – Sassuolo were then too often hurt by passes around the corner into the channels. Equally, with the double pivot or centre-backs jumping out to press the ball at every opportunity, they left space behind them for the opposition to exploit.

It was therefore common to see Sassuolo’s central defenders being a little more conservative in the defensive third, instead focusing on protecting the central spaces in front of goal. However, this led to other problems, with gaps opening up between the full-backs and centre-backs. Here, once again, crosses hurt them.

De Zerbi has enjoyed a great deal of success in his coaching career to date. His playing style – something of a high-risk, high-reward approach – has brought plenty of career progression. Replacing another manager, in Graham Potter, who has moved on to bigger things will be a big challenge. Whether or not he succeeds, De Zerbi’s exciting brand of football will certainly entertain.