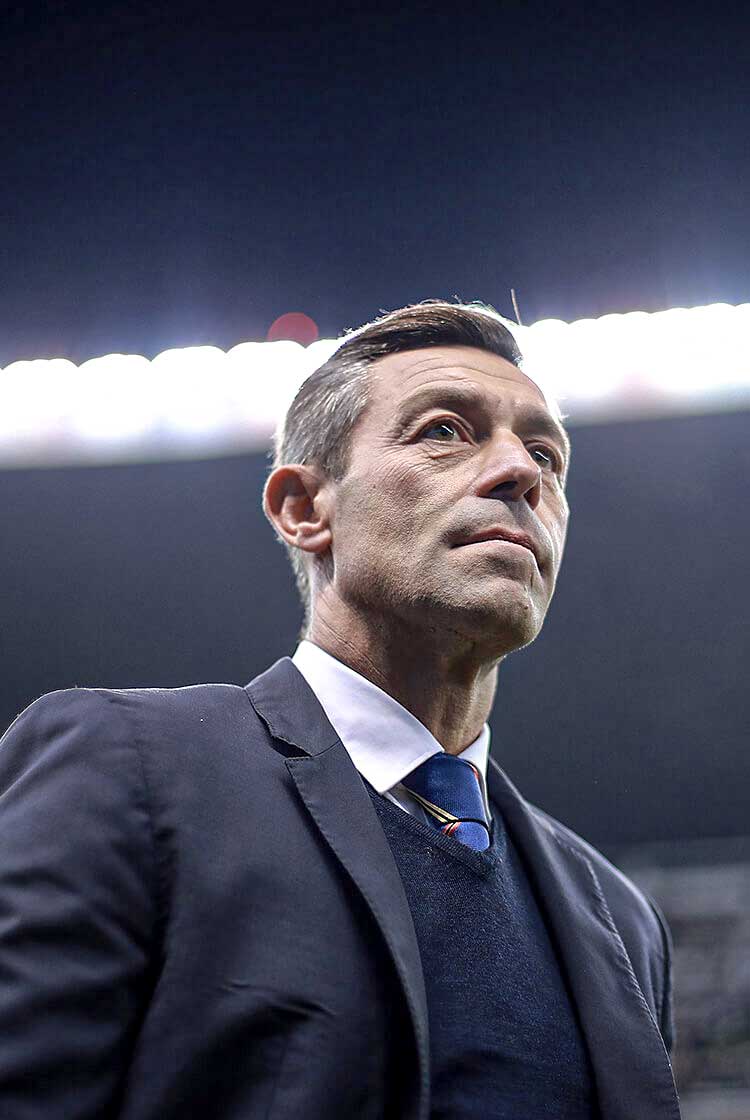 It all started when I was still a player. Being a professional was a childhood dream.

And I did everything I could to make it come true. But the most I ever achieved was becoming third-choice goalkeeper for Portimonense, a Portuguese First Division team.

I then decided to try to fly higher through the academic route. I have a degree in sports science, with a focus in football. Beyond that, I have a master's degree in high-performance coaching, in addition to being a UEFA-qualified coach.

Another important part of my education was my curiosity towards other people in the industry. On several occasions, I put my backpack on and went to find out how the big teams work. I visited clubs like Real Madrid, Atlético Madrid and Manchester United.

A good professional has to be constantly learning. I try to update my knowledge all the time.

Football has interesting cycles. When I started as a coach, the sport opened the doors more easily for former players. There were more opportunities for them.

In Portugal, in particular, it was only after the success of Carlos Queiroz (above) and José Mourinho that coaches who were trained through the academic route became more attractive in the market. They proved that it was possible to be a top-level coach without having been a top player.

The funny thing is that I came to Sporting because of my master's. My tutor was the director of the Sporting Academy: Professor Pedro Mil-Homens. He was the one who invited me to be an analyst on the staff of Fernando Santos, who went on to become coach of the Portuguese national team.

I had a quick interview with Fernando. We got on immediately. I am very grateful to him for that opportunity. When he stepped down, his successor at the club was José Peseiro (below).

By chance, Peseiro and I had studied together. We had an existing connection, and we developed our relationship as he was already part of Sporting's structure. I ended up taking on the role of his assistant coach.

In the 2004/05 season, we took Sporting to the final of the old UEFA Cup. Unfortunately, we lost the match to CSKA Moscow, but it was a fantastic experience. The team had a lot of quality. Working with so many competent people only made me evolve as a coach.

Overall, I worked as José’s assistant for seven years. If I had to sum up that relationship in one word, I would choose 'loyalty'. With any staff I now work with, there are three essential things: loyalty, competence and spirit.

I worked alongside Peseiro with five different teams. We started at Sporting, then we went to Al-Hilal in Saudi Arabia, Panathinaikos in Greece, Rapid Bucharest in Romania and finally the Saudi national team.

In any relationship, you have to make things very clear from the beginning – and I did that with Peseiro. He always knew that I wanted to become a head coach eventually. I just didn't know when that would happen.

But there was no doubt that someday it would happen.

My first big show of loyalty to Peseiro took place at Sporting. When he left, the club invited me to stay and set up a scouting department. In football, principles, like loyalty, are often forgotten in favour of personal advantage.

I couldn't just think about myself. I talked to José, and he made me feel that it had to be my own choice to take the job. He wasn't going to commit to another project until the end of the season.

I stayed at Sporting until he accepted a new challenge. In the meantime, my work in Lisbon was focused on analysing the club's own players.

“They were difficuilt financial times. We couldn't even pay wages. Players were struggling to support their families”

Then we started producing reports on players on loan from Sporting, in addition to analysing the team's rivals. And, finally, we also monitored the market to suggest possible signings.

The first challenge after leaving Sporting was in Saudi football. Funnily enough, it was in the same country where the partnership between Peseiro and I eventually ended.

We were with the Saudi Arabia team and I was invited to coach the Olympic team, which was fighting for a place at the London 2012 Games.

I didn't ultimately get that job, but the offer made me realise that the time had come to cut the umbilical cord.

I made the decision to leave because I felt it was time to go my own way.

Fortunately, the wait for a job offer was short. About a month after leaving Saudi Arabia, I took over as manager of União de Leiria.

It was my first opportunity, but I felt ready. All those years as an assistant, doing lots of different jobs, gave me the ideal experience for the next step in my career.

Leiria were in the Portuguese first division, but were going through extremely difficult financial times. They were unable to pay wages. There were players who were struggling to support their families.

Managing moments like that turned out to be a great learning experience. I needed to create different working dynamics to try to forget the context. Every football professional is passionate about football. In other words, you are all living a dream.

“In my head, I thought I would have a place in Europe”

That was the path I chose: to remind those players – who were in some ways living a nightmare at the time – of their childhood dreams. We put aside the problems off the field and achieved great results on the pitch.

The coach needs, above all, to know his people. It's no use having a lot of technical knowledge and good ideas about the game if you don't understand that there is a human being before the player.

The situation taught me the importance of knowing about each individual’s life. To help them whenever possible. First, get to know the human being; then convince the player to embrace your ideas.

We finished the season in tenth position. We had achieved, with some ease, the main objective of avoiding relegation.

My second opportunity as a head coach came at Nacional, in Madeira. It turned out to be the last in my country – so far, at least. After Nacional, Mexican football appeared in my life, and Santos Laguna opened its doors to me.

My experiences in Portugal, with both Leiria and Nacional, had been that a phone call was enough to sign an agreement. It was a very basic process.

In Mexico, it was different. The club’s board of directors interviewed me. I had to make a presentation about my ideas before I was chosen to lead Santos Laguna.

Of all the clubs I have worked at, Santos Laguna was the best organised, with a clear and well-defined vision of its ambitions. It is no coincidence that this very young club has won so many titles.

“At Ibrox, there are 50,000 fans giving unconditional support at every game”

Today, I am extremely grateful to the country. The five titles I won in my career were won in Mexican football. Three for Santos Laguna and two for Cruz Azul (above).

Before working at Cruz Azul, I decided to leave Mexico and went to Qatar, where I managed Al-Gharafa. I don't know what would have happened if I had stayed in Mexico. Things were going very well at Santos Laguna.

Perhaps I was guilty of not living in the moment. I failed to grasp the importance of everything we had built at Santos Laguna. When I decided to leave, my salary had practically doubled from what I received when I first arrived at the club.

It turns out that in my head – and only in my head – I thought I would have a place in the European market. Why wouldn't one of the great clubs from my country open its arms for me, after all the professional growth and titles won in Mexico?

I didn't know how to live in the here and now. I wanted to leave Santos Laguna, and the offer I got then was from Al-Gharafa. In the end, I stayed there for about a year and a half.

It took longer than I imagined, but at last the chance to return to European football finally arose. Rangers chose me to lead them. As I was still under contract with Al-Gharafa, they had to pay €1m to secure my release.

I was very proud to join Rangers, a club with so much tradition and glory. I look back and feel happy to have taken on such responsibility. There is no doubt in my mind that Rangers was the biggest club I have led.

I will never forget my first game at Ibrox Stadium, with the warm welcome from the fans. At every game, there were 50,000 fans giving unconditional support.

“The club had gone a long time without winning the title. That was a big burden on the players”

For me, working at Rangers was a fantastic experience despite the fact it was interrupted. The experience of the Old Firm derby (above) was fascinating – it is a rivalry that transcends football. However, my job at Rangers was, unfortunately, short-lived.

I was pleased to hear Steven Gerrard (below) recently praise his predecessors. Gerrard has done a brilliant job but shows great generosity in thanking those who helped pave the way for the club’s current success.

If it were possible to go back, I would probably make different decisions – that is, in relation to the selection of the squad. At the time, we opted for a group made up of lots of foreigners.

That created a big culture shock in the locker room. At the cafeteria tables in the training centre, the division was clear. At one table, the Scots; at another, the other British players; and, at a third table, the overseas players. It was difficult to create a sense of union. Today, Rangers’ squad is composed largely of British players.

From there I had the privilege of being able to return to Mexico, to work with Cruz Azul. There, we built a very competitive team. It was a difficult time, though.

The club had gone a long time without winning the Liga MX title, and that was a huge burden on the players. It generated what Jorge Valdano defined as “stage fright” – a psychological block that stopped them reaching the peak of their potential.

Despite this, we managed to create, in the almost two and a half years that I worked there, a winning mentality. We entered every competition with the goal of winning the title. We won the Copa Mexico and the Supercopa.

“I don't feel fulfilled yet. Satisfied, yes. Accomplished, no.”

In addition to the cups, we also played good football – but that's not the only thing I'm proud of. The whole project was built well.

Banishing the ghosts of the title drought and building a strong squad led to our success on the pitch.

This reminds me of the biography of Bill Walsh, the legendary coach of the NFL’s San Francisco 49ers. In Mexico, I was very close to US sports culture. The title of the book alone says a lot: 'The score takes care of itself.'

That is to say, if you organise everything in the best way and your team is able to go out on the pitch concerned only and exclusively with the game, positive results usually follow. Cruz Azul was the football project that has fulfilled me the most so far.

However, I don't feel completely fulfilled with my coaching career. Satisfied, yes. Accomplished, no.

I have always been very ambitious. I set goals and I don't rest until I achieve them. There are many other professional challenges I want to experience. I am ready to reach the highest level in football. And win.