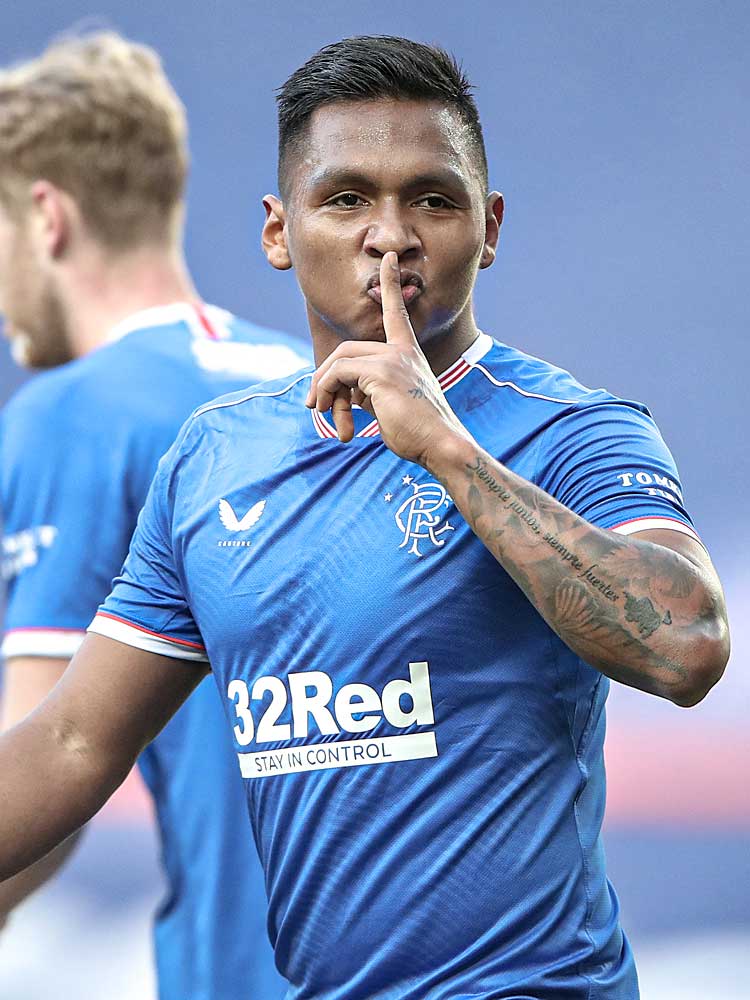 Profile
It has long been attacking players who have dictated the Scottish title race and, therefore, the winner and loser of the Old Firm rivalry. In the modern era alone, Henrik Larsson, Ronald de Boer, Moussa Dembélé and Odsonne Édouard have been among the most influential players in Scottish football, and Alfredo Morelos' role in Rangers winning the title in 2020/21 earned him the right to join them.

It was also during 2020/21 that Morelos equalled the record of Ally McCoist, another Rangers great, by scoring his 21st goal in European competition for the club. "Alfredo's a top class player," said their manager Steven Gerrard. "A top class goalscorer, and it's fantastic that he's still here."

Tactical analysis
Morelos most stands out for his power, which makes him particularly effective at winning individual duels – both in static, physical battles and when in a race. His explosive power often gives him a decisive advantage in the first few yards of a race, and he uses that burst of pace to leave defenders behind, particularly succeeding when his opponent starts without the correct body position. He also uses his arms well to keep opponents away from the ball and therefore to gain even more of an advantage.

With the ball at his feet he favours using his dominant right foot, though he remains capable with his left, and can use it to play both short and long passes. Most of his time on the ball unfolds with his back to goal, and he is adept at linking play from any position on the pitch. He also works extremely hard, and covers a significant amount of ground to take possession.

He, similarly, effectively battles for long passes that reach his feet by using his upper-body strength and strong arms to win the ball or to retain possession after a good first touch. He lacks the height to regularly compete in the air, however, even if he shows intelligence in recognising when he is right to and when there is little to be gained in expending the energy involved in challenging and therefore when he should instead prioritise the second ball.

Morelos is considerably more than just a goalscorer, and is particularly influential between the lines. Like an effective attacking midfielder or number 10, he accesses space behind the opposition’s midfield and receives on the half-turn to quickly progress play and skilfully spread the ball to teammates. He can play simple passes before running towards goal, but he is particularly good at swiftly switching play, after receiving the ball, to a player who can advance into the final third (above). If he can reduce the number of balls he concedes after a poor first touch he can prove even more effective, but his confidence remains such that he continues to look for the ball regardless of those failures.

He poses a significant threat close to goal, and thrives against compact defences that many other strikers would struggle against. He is proven at receiving with his back to goal before turning to shoot, or at offloading the ball to a forward-facing teammate, and has a powerful shot with his favoured right foot that requires little backlift, enhancing his effectiveness.

He also links well with teammates in the final third, when his intelligence helps teammates to weave past defenders and create goalscoring opportunities. That he is adept at reaching passes or crosses close to goal, and can finish with his head almost as effectively as he does with his feet, heightens his potential. With both his head and feet he is skilled at keeping his efforts low and at aiming for the bottom corners (above).

Role at Rangers
Morelos features as the lone striker in Rangers' 4-3-3, in which Ianis Hagi features from the right, and Ryan Kent from the left. Both wide forwards have significant freedom, and will regularly move infield to attack the penalty area. If Joe Aribo starts in central midfield he also has lots of freedom, and uses it to regularly support attacks and to move into a position to finish them.

Morelos recognises that his runs are hardest to detect when they are towards the back post, so he prioritises heading there when the ball is played wide and there might be an opportunity to attack crosses. When he receives to feet he struggles to beat an opponent by dribbling, but he can impress when there is space to push the ball past a defender and then chase it (above).

When facing a higher defensive line, he looks to move wide and to make runs in behind, and does so by gambling with his position to start right on the edge of being offside to give himself the best chance of getting in on goal. He is extremely composed when one-on-one with a goalkeeper, and complements that composure by varying his finishes to keep his opponent guessing.

He also plays a proactive role in the first line of Rangers' press, by helping to direct play towards one of their opposing full-backs (above). During the opposition’s periods in possession, and while Rangers are positioned in a mid-block, Morelos is adept at identifying when an opponent can be targeted and dispossessed by jumping forwards with intensity to try to recover the ball. It is common to see him tackling from behind to help a teammate, and him working particularly hard to make regains.

His versatility has been demonstrated by the different role he has for Colombia, whose striking options mean he often instead features wide. From either side of the pitch his intelligent movements and explosive pace takes advantage of space that he then uses to deliver crosses or passes to his teammates.

He, regardless, continues to attempt to drift infield to receive, to encourage the full-back behind him to advance, and to create overloads in the centre of the pitch, from where he can receive with his back to goal and receive on the half-turn (above). He is a rounded forward with an admirable ability to adapt to different teams and tactics.