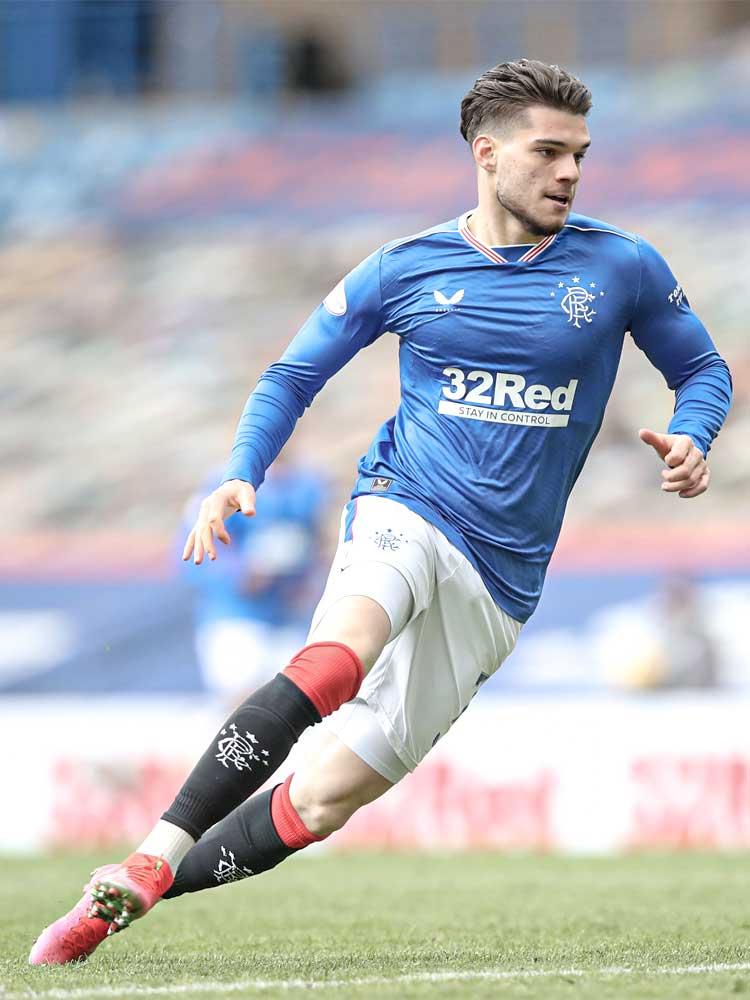 Profile
Steven Gerrard knows better than most what is required to succeed under the weight of expectation that comes with being a promising young player inheriting the intimidating legacy of those who came before him. Gerrard, for over a decade, led Liverpool's attempts to win the first Premier League title required to take them back to the summit of English football; Ianis Hagi, his exciting player at Rangers, is more simply the son of Gheorghe Hagi, the greatest Romanian player of all time.

The then 21-year-old had completed barely four months of a six-month loan deal from Genk when, in May 2020, Gerrard had seen enough to convince him of the value of signing him on a permanent basis for a fee of £4m, and he has continued to improve. "I'm proud to wear this name," Hagi said upon his arrival at Ibrox. "It's a pressure I was born with so I've got used to it. I use it as a motivation to get better. My father told me about the games he played at Ibrox and many things about this club."

Tactical analysis
Hagi is a versatile attacking midfielder who is as capable of playing from the left as he is from the right or from a central position, but it is through the inside channels, when he is operating as an inverted wide player, that he is most effective. His ability with both feet makes him capable of combining with teammates towards both the left and right, and of succeeding despite being short of time and space.

When he dribbles he often feints his body from one side to the other (below) which, complemented by his quick feet and agility, contributes to him being effective when attacking an opponent one-on-one; the timing of his steps take that opponent in one direction, and his explosive pace takes him in the other. Cuts and chops across the ball also move it from one side to the other, but are mostly reserved for when he is attacking over an increased distance and into more space.

Similarly to the combinations he contributes to, Hagi's effectiveness at passing and shooting with both feet makes him flexible through both inside channels, from where he can both shoot across goal towards the far corner or cut the ball back to the near post. For all that he strikes the ball cleanly, however – and he is also very composed – he remains better suited to creating goalscoring chances, from a variety of angles and through defences or from space, than applying the finishing touch.

It is therefore his preference to adopt positions infield, from where he plays passes in behind that encourage early shots on goal and where his ability to use both feet invites him to target an increased number of spaces. Those passes prove delicate, and regularly lead to a teammate directly shooting at goal; from wider positions his passes are played at an increased speed.

Those releases of possession, from both wide and central areas, are well timed. Should a teammate be making a supportive run alongside him from a deeper starting position, he will delay passing until that teammate is in the most effective position, in turn drawing defenders towards the ball and increasing the space his teammate will receive in.

His defensive presence, in contrast, is insignificant. His agility makes him capable of contributing to his team's attempted press, even as that press changes – he prefers doing so towards the right – but he completes few tackles in either the attacking or defensive half of the pitch. He is instead most useful at closing down full-backs and limiting defenders' passing options and, if supported by teammates, forcing the ball into a trap that involves defensively stronger teammates duelling for possession.

Role at Rangers
Hagi has, alongside James Tavernier and Borna Barisic, become one of Rangers' most creative players as they have sought to end Celtic's dominance. The overlapping runs Tavernier (below) and Barisic offer from full-back encourage Hagi to operate through the inside channels, and link with and create – often via his diagonal passing – for Alfredo Morelos, Kemar Roofe and Jermain Defoe. All three goalscorers favour running in behind (above) and, like Hagi, perform in the knowledge that Rangers' central midfielders will withdraw into deeper positions to support from behind Hagi, Barisic and Tavernier.

On the occasions their full-backs provide Rangers' attacking width but resist overlapping, Hagi instead offers blindside runs in behind from a narrower starting position and then seeks to receive after again moving wide, having drifted in behind his opposing full-back to where he can deliver crosses or cut-backs into the penalty area. If attacking against a particularly compact, low defensive block – Rangers' reputation makes that far from rare – he remains wide to encourage the full-back behind him to offer an underlapping run or uses movements around him as decoys to drive across the pitch and then shoot or pass towards the far post.

If that means there are times Hagi isn't the one recording the assist, his contributions before that point are no less crucial. Tavernier, particularly, is an increasingly influential player who also provides goals, and largely because of his understanding with the Romanian, who similarly benefits from defenders focusing on Tavernier.

A further role has involved Hagi operating as a central attacker and in a more advanced position – in front of wider-moving central midfielders – from where he supports the attacks of the striker or strikers in front of him by offering supporting movements and runs to create the spaces those strikers require to isolate their opposing defender. Gerrard regularly favours selecting a second orthodox striker in the attacking unit of either his 4-3-3 or 4-2-3-1 which, when combined with their advancing full-backs, often means Hagi operating similarly to a number 10 and linking into those two strikers. Both strikers, in their attempts to avoid each other, also spread and, in turn, create space for Hagi to attack into, even making him the focal point of a five-pronged attack.