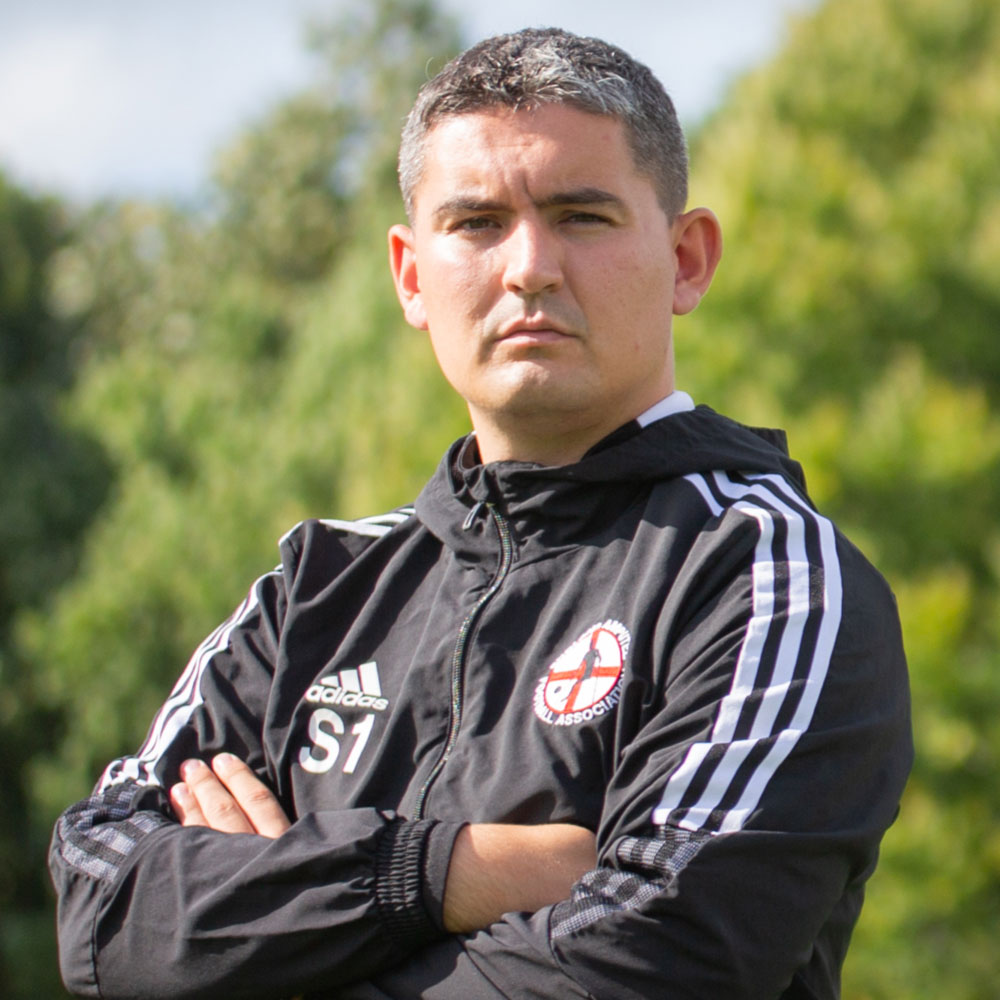 Kevin Davies stood over Jack Wilshere. There was silence all around.

It was Wilshere’s first day as a Bolton player, after my dad signed him on loan from Arsenal in January 2010. I was at the Bolton training ground that day to watch the players. Back then, I was lucky enough to do that very often.

Wilshere didn’t say anything. There was no response at all. He just got on with training.

Ten minutes later, Davies had the ball. Wilshere came flying in and completely took him out. A clean tackle, but Davies went flying.

Wilshere stood over Davies. The tables had turned. Then, Wilshere offered Davies his hand to help him up. “Yep, that’s good enough for me,” Davies said.

It was incredible to witness fiery moments like that, but I came to realise they were completely normal in that kind of environment. As a child, I was getting an insight into what it took to be an elite footballer, to train at the top level and to maintain that level. You needed a bit of bite, that was for sure.

"moving to Burnley when my dad took over was mesmerising. It was every kid’s dream"

As a teenager, with my dad managing at a Premier League club, I got used to seeing moments like that, and top-quality players up close.

While my dad was Bolton manager (below), they had Rodrigo Moreno, Marcos Alonso, Daniel Sturridge, Gary Cahill, Fabrice Muamba, Johan Elmander and Matt Taylor, as well as Wilshere, Davies and many, many more. Loads of really, really good footballers. Whether I was seeing them after school or during half-term and school holidays, it was a big part of my childhood.

I was around stars every day. I would sit with the players, who were fantastic with me. Chris Eagles was particularly good with me, taking the time to teach me skills and giving me his boots all the time, too.

It almost became a normal environment for me to be in. I wouldn’t say I was already thinking about how it might help my career, but on reflection it certainly gave me confidence with speaking to senior players – a teenager perfectly comfortable in a room full of Premier League stars. I was definitely picking up things that helped me once I moved into coaching myself at 16.

There probably wasn’t too much tactical or technical detail that I picked up at that age, but I was still learning things. I know I was very lucky to have that opportunity.

For a young kid, moving down from Scotland to Burnley when my dad took over, it was absolutely mesmerising. It was every kid’s dream.

"Having grown up close to the professional game, I knew early on that was where I wanted to get to"

Burnley were in the Championship at the time, but he took them up to the Premier League before he got the move to Bolton.

I wouldn’t be doing what I do if it wasn’t for my dad. As a professional, he’s a huge inspiration; but also, as a person, I aspire to be like him.

He’s helped me understand the game better and understand coaching more intricately. He’s given me a grounding that I’m lucky to have, and helped me be a better coach.

I started coaching early, at 16, having realised I wasn’t going to make it as a player. I was lucky to have a support network around me – in particular my dad – to help me realise that early on.

As I knew I wanted to stay in the game, I went to the Lancashire FA to do a two-year apprenticeship, learning about all different facets and areas of the game. In that time, I immediately really enjoyed coaching. Specifically, I absolutely loved working with children in disability development centres. That involved coaching kids aged between 12 and 16 who had a range of impairments.

I got all kinds of experience across the game. I coached girls’ teams at a variety of ages. My horizons were broadening.

"It was the right decision, but at the time I was extremely disappointed. I thought the world was against me!"

Having grown up close to the professional game, and got some experience of it already, I knew early on that was where I wanted to get to eventually. But I also knew I had to work my way up. I had to learn my trade, so I started putting in the hard yards.

While doing my apprenticeship, I met Pete Wild, who has gone on to manage Oldham, Halifax Town and Barrow. At the time, he was the England Amputee head coach.

He was aware of my interest in disability football, and he took me under his wing. He was kind of like a mentor to me.

Pete brought me on to his staff with the amputee team, and took me to the World Cup in 2014 in Mexico. Back then, I had so little coaching experience, I was just helping out with collecting bibs and balls – anything I could do, really!

I had to learn a new game. It’s obviously recognisable as football, but it’s still a very different game. It’s seven-a-side, halves are 25 minutes long, there are no offsides, and all outfielders have a lower-body amputation or limb deficiency and play on crutches. The goalkeepers have fully functioning legs and an upper-body amputation or limb deficiency, so they have to stay inside their penalty area.

I took to it straight away. After Pete left for Oldham to pursue a career in the professional game, I put myself forward for the head-coach role.

"The national anthem was booed; every one of our touches was jeered; flares were going off in the stands"

I was still only 16, though, and I didn’t have enough experience to be a head coach. It was the right decision, but at the time I was extremely disappointed. I thought the world was against me! I set my sights on getting the head coach job further down the line.

When I eventually got the job, I had decided that I wanted a better pool of players. So I got to work on developing the grassroots amputee game and the junior programme.

I did that voluntarily for 18 months, and increased participation massively. I stamped my own mark on the game, and the junior programme now helps develop youngsters and provides them with a pathway to the top. We’ve now got an eight-team domestic league that includes Manchester City, Chelsea, Arsenal, Brighton, Newcastle and Everton. It’s something I’m incredibly proud of.

When I was 18, the job came up again. This time I got it. My hard work was paying off.

I hadn’t only convinced the people with the power to make this appointment that I was ready for a head-coach position. I’d also increased the pool of players I had to choose from, as well as the quality of those players.

The progress we’d made became clear the year after I took over, when we went to the 2017 European Championship in Turkey. We didn’t have much of a reputation at that point, and we weren’t expected to do very well.

"I was taught a valuable lesson in the quarter finals. confidence edged too far into complacency"

In the end, and against the odds, we made it all the way to the final. There, we played against the hosts in front of 42,000 people at Besiktas’ stadium. That’s still a record for any game in disability football.

Sadly, we fell at the final hurdle, losing 2-1 to a last-minute winner. But the experience was something that I will never forget.

The national anthem was booed; every one of our players’ touches was jeered; flares were going off in the stands. It was a really hostile environment away to one of the best teams on the planet. To lead a team out in a game like that when I was still only 19 was incredible.

At the World Cup the next year, we went in far more confident, hoping to go one better. We knew that we’d be better prepared to face Turkey, should we come up against them again.

There were some positive results. We beat the hosts, Mexico, in front of 7,000 home fans. We also saw off Argentina, who are recognised as one of the best teams in the world.

But I was taught a valuable lesson in the quarter finals, as our confidence edged too far into complacency. We crashed out with a heavy loss, 5-1, to Brazil. It was one of the biggest defeats England’s amputee team had ever suffered, and a big wake-up call.

"It might not be the most traditional route, but I’m ambitious to go as high as I can"

A few years later, in the 2021 European Championships, we did little better, and came fifth. It was after that tournament – which I count as a disappointment – and with the next World Cup in mind that we decided it was time to bring through the youngsters we’d been developing for the last few years. My work on the youth side of the game was bearing fruit.

We head into the next World Cup, which is in Turkey in October 2022, with nine of our 13-player squad having come through the junior programme. It’s hugely exciting, both on a personal level for me and for the team. We’re confident we can fulfil our potential here, having learned from our previous experiences.

The set-up is entirely voluntary. The funding is completely lacking, and any money we do get is through fundraising or sponsorship. Hopefully we can draw attention to the game and build awareness by doing something special in Turkey. Doing so might spark a decision to improve funding in the game.

I’m loving my work with the amputee team, but professional football has been my aim as long as I can remember – ever since those days spent at Bolton’s training ground.

So, when the opportunity came up in 2022 to join my dad at Queen’s Park, I jumped at it. The director of football approached me about becoming a first-team coach there, while also taking charge of the B team.

Queen’s Park have produced players like Andy Robertson, so there’s a lot of history there, and I’m tasked with helping to develop more stars like him. I’ll combine this work with my role as England Amputee head coach for the World Cup campaign, but after that I’ll be leaving to concentrate on Queen’s Park.

It might not be the most traditional of routes to the top, but I’m ambitious to go as high up in the game as I can. I want to help take Queen’s Park into the Scottish Premiership, and on a personal level I want to be a head coach in the professional game.

As and when an opportunity like that comes about, I’ll be ready. I’ll have experience as a head coach, and I’m well aware of how tough training in a professional club needs to be. And I can always ask Kevin Davies for a bit of help on that front.