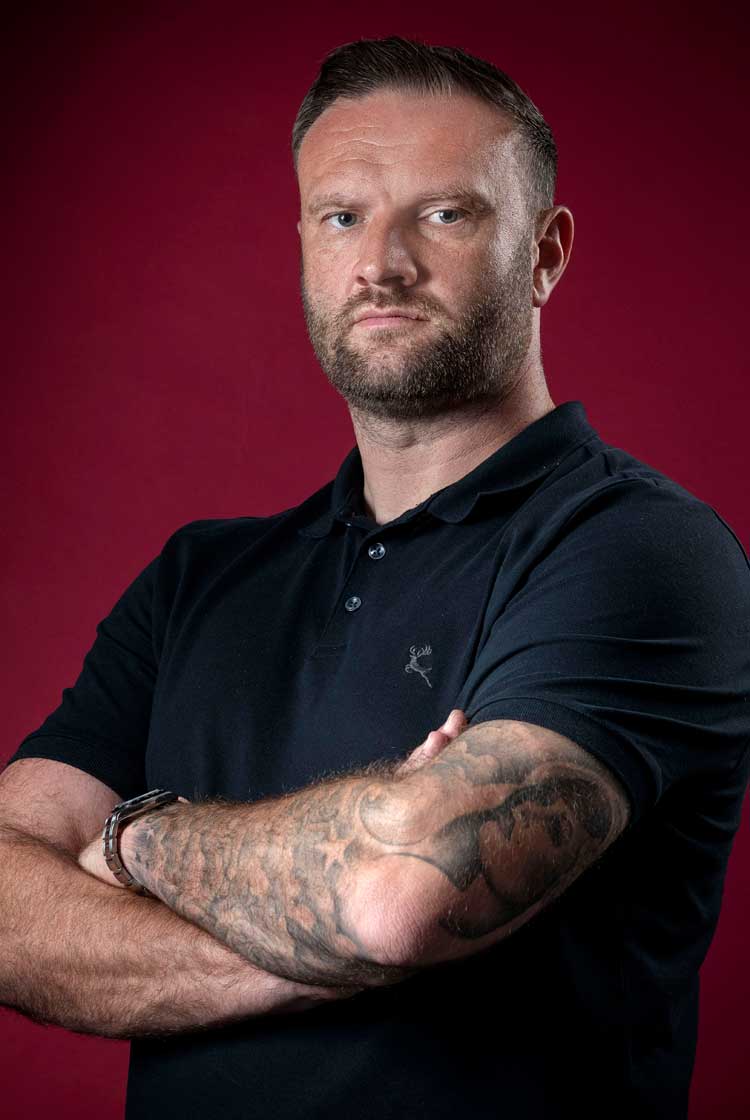 Early on, there were teacups flying everywhere and managers pinning players up against the dressing room wall. Later on in my career, managers would put their arm around your shoulder more often; they took a more sensitive approach, particularly with younger players.

I think there still is a time to have old-school values these days, but obviously the game is moving forwards massively and you have to move with the times. You can’t stand still and risk being left behind.

Given I played during a transitional time for football, when the game changed significantly, I learned from lots of very different coaches.

Jim Smith (below) was a huge influence on me at Derby, where I came through the youth ranks. He was very much from what I’d class as the old school; a big personality with brilliant man-management skills.

Roy McFarland taught me a lot about the defensive side of the game at Chesterfield, and then Ian Holloway, who I played under at both QPR and Blackpool (below), really rammed home how important mentality and belief is for footballers.

Olly built a group of players at Blackpool who believed in themselves more than any other I’ve experienced. He created something magical there; promotion to the Premier League with a £3m budget is completely unheard of, and that was down to him and the mentality of that team. We just completely believed we were going to succeed.

As I got older, I started studying the game more and more. Reading gives you access to the methods of coaches you otherwise might not be able to learn about.

Pep Guardiola has been a big, big influence on me as a result. For me, he is the best ever. Yes, there is lots of tactical detail, but his work ethic goes underestimated. He is a genius, but he isn’t a genius by chance. He works harder than anybody else and benefits from that.

“I didn’t see myself as a coach. From very early, I wanted to be a first-team manager”

I started thinking about becoming a coach from my early 30s, when I got going on my badges. From an early stage, I was already thinking about my philosophy; how I wanted the game to be played.

Even so, I still wasn’t ready when I got the Chesterfield job as caretaker manager in 2018.

I was still very much a player. We were in a dire situation; we’d already been relegated out of the Football League, and I was in charge for three games that didn’t mean much.

And yet, something went off in my head. From then on, it was all about being a manager.

I could quite easily have taken a route through an academy and worked my way up, but I wanted to test myself straight away. I didn’t see myself as a coach or a youth team manager. From very early, I wanted to be the manager of a first team.

I was on holiday that summer and got a call from an agent asking if I’d be interested in the Barrow job.

“Where’s that?” was my first question. I knew nothing about Barrow, let alone the football club.

After I’d been filled in, it sounded like a hell of job. The owners wanted a young manager; someone with fresh ideas to reinvigorate the club.

“I can't deal with mediocrity. to me, tenth is mediocre”

The only thing was, they were cutting the budget in half; they only had four contracted players and no coaching staff at all. It really was a blank canvas. And there were only five weeks until the start of the season.

I took the job and got to work on rebuilding the squad. First, though, I had to find an assistant.

I didn’t want to pick a friend. I wanted someone who would challenge me, so I put an advert out and then did the interviews myself.

I interviewed seven candidates and ended up appointing Peter Atherton, who has turned out to be my best piece of recruitment so far. He has been so good for me.

Peter and I then set about finding players to buy. We had to work quickly, and we had a shoestring budget to work with. We were feeding off everyone else’s scraps, really.

We established the kind of attributes we were looking for in each position and got to work.

It was really hard because of all the limitations on us – not least financial – but we cobbled together what was essentially a bunch of misfits. That’s all that was possible at the time, but we managed to get a squad in place for the start of the season.

I’d been told you simply cannot succeed in the National League by playing possession football, but being told that just made me want to do it even more. I stuck to my beliefs, and we did well playing the game the way I wanted it to be played.

“Anyone who knows me knows how ambitious I am. I want to get to the top”

We finished tenth in my first season, which was a huge success for the club because the owners were just looking to avoid relegation.

But I wasn’t happy. Not at all.

I can’t deal with mediocrity and, to me, tenth is mediocre. It’s middle of the road. I just thought we could have done better.

So, we got to work again. We started planning for the next season.

We’d dominated the ball well but had struggled to create enough chances. We needed a striker who could both stretch the opposition by threatening in behind but was also able to drop in and link play. We identified Scott Quigley and signed him from Blackpool, and he was transformative for us.

It meant we could commit fully to being a possession-based team in games when we wanted to play that way. We pushed the defence right up and pressed high, too.

We started the season badly, playing in a 4-2-3-1 formation. We were just so weak defensively and kept getting done at set-plays. So, after taking seven points from nine games, I changed to 3-4-1-2.

“Bolton is a massive club that doesn't belong in league two”

That meant we had an extra centre-half on the pitch and were stronger at the back, but it also got us two up front. We improved at both ends of the pitch, and from then on we went on a fantastic run. We won 11 of our next 12 games; by November we were top of the league, and we never looked back. We won the title, and Barrow were back in the Football League for the first time in 48 years.

Anyone who knows me well will know how ambitious I am, and how much I believe in myself. I want to get to the top.

After the success with Barrow, I had job offers from elsewhere. I turned down offers – some from as high as League One – but Bolton were very difficult to say no to. It was tough to leave Barrow, especially right after winning the league, but this was such a great opportunity.

Bolton is a massive club that was in League Two at the time, but clearly didn’t belong there. After a half-hour chat with the chairman, Sharon Brittan, I was convinced that our views were aligned. She believed I could take Bolton Wanderers where they needed to go, and Bolton could take me where I wanted to go.

They had been in the Premier League only nine years earlier, but the board didn’t place much expectation on me. Again, there was a bit of a blank canvas in terms of the players already at the club, and the pandemic restricted what we could do in the transfer market. Then, with the salary cap in place, the advantages of being Bolton and having the resources and revenue they do were taken away.

Again, I stuck to my principles with how I wanted the team to play. We went for a more patient, possession-based style than what had gone before.

“The players became addicted to winning. There was a snowball effect and we kept on winning”

It didn’t go well to start with, and the fans needed winning over because they weren’t exactly happy with the style of football because it wasn’t bringing results.

It took time to convince them. Then our form picked up around November, as the players grew more used to my training methods.

I demand full tilt from my players in every training session. That can be draining, but being demanding in training pays off on the pitch. We saw that happen at Barrow, and it happened again at Bolton.

I just ask that my players are open-minded about new ideas and that they buy into the project. There’s no hierarchy at the football club; each of the staff is as important as the next.

When a new manager comes in who talks the talk, the players need action to show they can trust in them. My players bought into what me and my staff were doing from the get-go, and we built a connection as a result. There was a trust in us and what we were trying to do.

In mid-January, we were down in 17th in the table, but we got our recruitment right and got on a roll. The players became addicted to winning. There was a snowball effect and we just kept on winning games. We believed we were the best team in the league, and it just felt like there was no stopping us.

I always believed we were going to do it. I had the backing of the owners, and we could see improvements. We were justified in retaining belief, because we stormed up the league, winning 16 of our final 22 games to secure promotion at the end of the season.

“This club nearly went under from overspending in the past. It won't do that again”

My only regret is that we only finished third. I genuinely believe we were the best team in that division, and we should have won the league.

I was obviously pleased that we’d done it, though, and we celebrated for a night after winning the final game of the season to get promoted. But the next day, I was totally focused on recruitment for the next season. I started making lists of potential targets.

In football, the minute you start patting yourself on the back, things can turn pretty quickly. You need to always be looking for ways to improve. So, ever since that moment, I was thinking about League One.

But this club nearly went under from overspending in the past, and it won’t do that again. It has to be sustainable. I wouldn’t want it any other way. We will stick to our budget.

That doesn’t mean we aren’t ambitious, though. The long-term aim is to get this club back into the Premier League. That’s where it belongs.

There’s no point aiming that high without a clear idea of how we’re going to do it, though. That includes short-term wins to aim for, and we’ve got those planned out.

We know what it will take to get us to the top, and we’ll do everything we can to get it right.