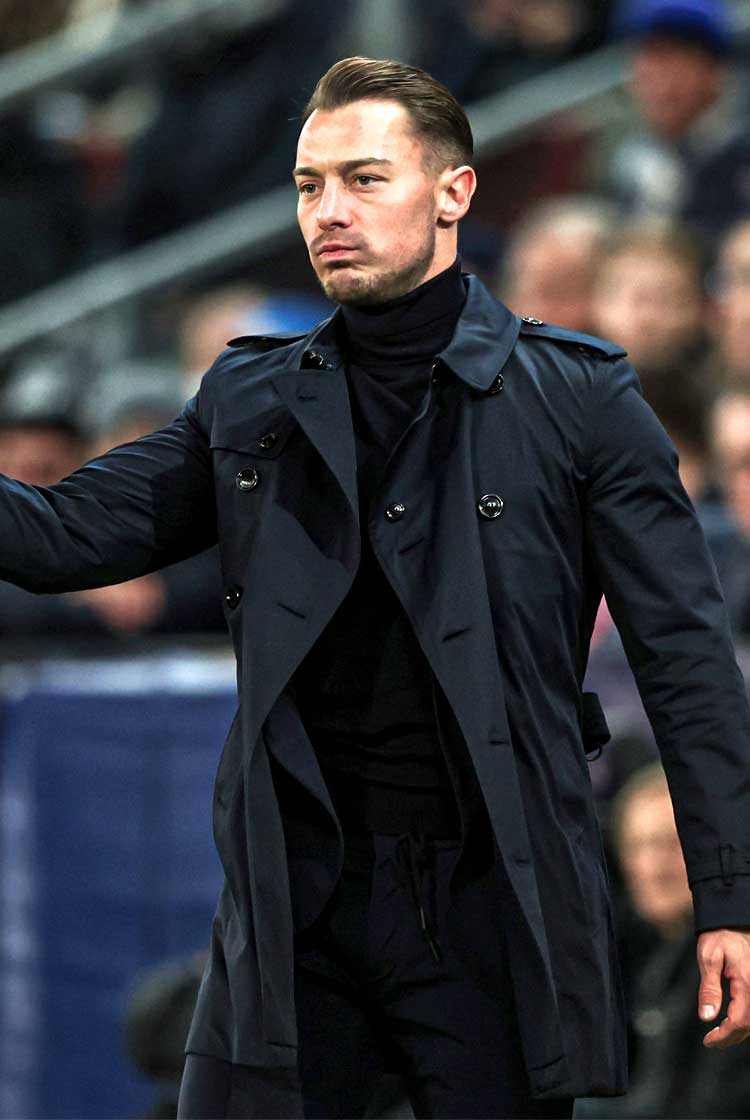 Just 26 years old when injury forced him to retire from playing, Matthias Jaissle made an early move into coaching. Despite admitting he "didn't even think about coaching at all", Jaissle's former manager at Hoffenheim – a certain Ralf Rangnick – noticed something in him as a player and offered him a coaching role in the youth department at RB Leipzig. He eventually followed then-Leipzig manager Alexander Zorniger to Brondby, where he was assistant manager, before Rangnick – clearly certain Jaissle could succeed as a coach – brought him back under the Red Bull umbrella as a youth-team coach at Salzburg. Jaissle was then appointed manager of Salzburg's reserve team, FC Liefering, in the Austrian second tier. After only six impressive months in that role, he earned promotion to first-team manager aged only 33.

In his first season in charge, Jaissle is on course to win the Austrian Bundesliga, having already taken Salzburg to the knockout stages of the Champions League for the first time in their history. A 1-1 first-leg draw with German giants Bayern Munich gave hope of a round-of-16 miracle, but a heavy away defeat put paid to that idea. Nevertheless, Jaissle has already made a name for himself on the European stage, and is surely destined for bigger things. Here, we take a look at how he likes his teams to play, and what he would bring to any future role.

In his first managerial role – in the Austrian second tier with FC Liefering – Jaissle used a 4-4-2 with a diamond in midfield. The front two held high positions for as long as possible, threatening the spaces in behind the opposition centre-backs. Liefering transitioned forward quickly after a regain, and often looked to find a forward running in behind early on. If they couldn't find a pass into the strikers, they had at least created space centrally for the midfield four to play in, with the opposing defence pushed back by the forwards’ runs.

Jaissle used a single pivot, with two versatile number eights operating in the inside channels. These eights often made runs between the opposition full-back and centre-back, which narrowed the opposition back line. This created space for the full-backs to push forward into, and they provided the team’s attacking width during sustained periods of possession (below). Jaissle’s full-backs were also crucial when his team transitioned into attack, especially when central progress was limited.

The number 10 in his 4-3-1-2 roamed across the pitch and combined with teammates in the inside channels with quick, short passes. The number 10 also helped overload opposing midfields by dropping centrally, before looking to find the front two with vertical forward passes. Third-man combinations were commonplace, with the number 10 moving wide to link with an overlapping full-back and number eight who had attacked through the inside channel. These combinations led to crosses and cut-backs that targeted the strikers, who maintained a central presence in the penalty area.

Jaissle stuck with the 4-4-2 diamond at Red Bull Salzburg. Full-backs Rasmus Kristensen and Andreas Ulmer push forward and provide the team’s width, especially when facing a deep block. One key difference at Salzburg has been the deepest pivot player dropping closer to the two centre-backs, who then widen to create a back three. This has allowed the full-backs to move even further forward, with sufficient protection at the back against opposing counter-attacks. Here, the number eights drop to form a double pivot in front of the newly formed back three. This creates more space in the inside channels for the centre-forwards to move out wide, and the number 10 is then free to make runs between and beyond the front two. This forms a front five with which Salzburg can stretch an opposition back four or occupy all of the defenders in a back five.

The movements made by Salzburg’s centre-forwards are slightly different to those at Liefering. They make more runs across the opposition back line, receiving more often in the wide areas and not just staying central. When the full-backs do not push forward, the strikers’ movements create room for number 10 Brenden Aaronson to push forward. The closest number eight – mostly Luka Sucic, Nicolas Seiwald or Nicolás Capaldo – then makes a run through the inside channel. With the centre-forwards wider than Jaissle’s front two at Liefering, these runs by the number eights penetrate far further. As such, they will often look to receive in behind the opposition.

The two strikers usually play on the opposite side to their stronger foot, meaning they can cut in from wide to shoot on their stronger side or combine with midfield runners. Karim Adeyemi often plays on the right of the front two, cutting inside on to his stronger left foot. A right-footer, usually Noah Okafor or Junior Adamu, tends to start on the left. Salzburg’s counter-attacks have benefited from the wider movements of their centre-forwards (below). The strikers are able to isolate a centre-back before driving back inside to shoot at goal, or release a runner through the centre of the pitch once the opposition centre-backs have been drawn out wide.

Without the ball, Jaissle’s team has a clear way of playing. His Liefering side defended with intensity, tempo and lots of defensive actions. Their high pressing was led and instigated by the two centre-forwards, who jumped forward on to the centre-backs. The first line of the press looked to force play inwards and towards midfield, where they would usually have a 4v3 overload through the midfield diamond. The central midfield unit played narrow and condensed around the ball. Each player started on the outside shoulder of their direct opponent, to lock the ball in the centre of the pitch and stop the opposition from playing out to their full-backs. One of the front two also pressed from behind, to stop the opposition playing back to their goalkeeper or a deeper defender to recycle play.

Whenever the ball was worked around the outside of Liefering’s front line, Jaissle instructed a number eight to press the full-back, with the number 10 then aiming to stop passes into the pivot (below). Liefering’s far-side number eight then moved narrow to further condense the space the opposition had to work in. This allowed Liefering’s single pivot to support behind the number eight who moved out to press near the touchline. Jaissle’s full-backs then aggressively jumped forward to support the wide press, while the closest centre-forward also moved across to stop the opposition from recycling play through the centre-backs. When Jaissle’s side did this and pressed out wide, they would convert into a 4-2-2-2 shape.

There has been a similar out-of-possession approach with Salzburg. Jaissle’s side presses with intensity and is among the most active pressing teams, ranking near the top of the Austrian Bundesliga for fewest passes allowed per defensive action. They press in a similar manner to Jaissle’s Liefering, with the diamond midfield crowding out the opposition when they are pressed into the centre of the pitch. The four midfielders then adjust their positions to press when play moves out wide.

One slight difference at Salzburg is that they push their full-backs even higher to press, especially when the opposition have successfully built around the outside of their number eights. When they jump out to press, the entire back line then shifts across, with the ball-side centre-back also willing to step out and press if they have an opportunity to win the ball.

Another addition is the wider pressure applied by the centre-forwards. This has seen Salzburg very briefly form a 4-2-3-1, where one centre-forward presses a wide centre-back or even a full-back. This allows them to retain four players in the centre of midfield and, with it, a midfield overload. This also leads to similar wide counter-attacks involving the centre-forward who has moved away from the centre, as seen at Liefering. However, at Salzburg, the centre-forwards work much closer together (above), with the number eights and 10 able to make penetrative runs through the centre of the pitch after a regain.

Already doing impressive things with Red Bull Salzburg, Jaissle has the chance to follow in the footsteps of other former Salzburg managers to make the step up to one of Europe’s major leagues. Like Marco Rose and Jesse Marsch before him, Jaissle is one to keep an eye on.