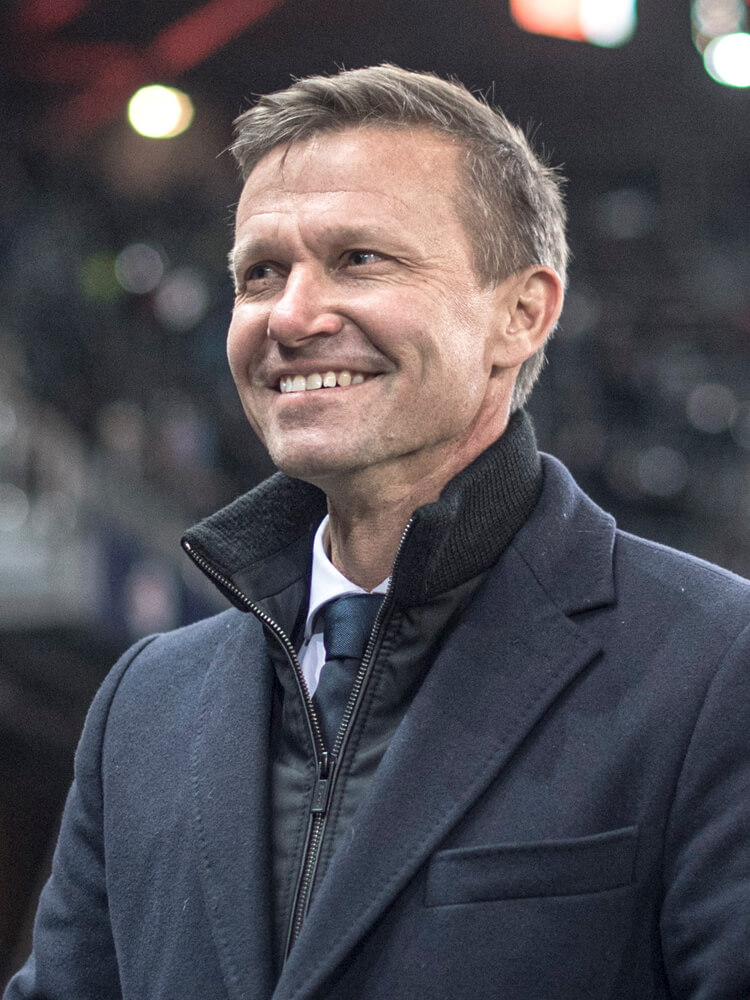 To be honest with you, the first time I met Ralf Rangnick, I didn’t really know much about him.

That was at my interview for the head coach job at New York Red Bulls.

Gérard Houllier was also there. I knew of Gérard because I’d followed his work at Liverpool and Paris Saint-Germain.

I spent a large portion of the interview addressing Gérard, telling him about my ideas on football.

But then, when Ralf (below) and I started talking, things got a bit heated. It almost became an argument!

I walked away from that interview wondering what I’d done. I thought there was no way I was getting the job after that.

I later got a call from the club president. “Ralf loved you,” he said.

I couldn’t believe it, but he’d been impressed by my enthusiasm and my passion, and I got the job.

"the intensity that ralf demands from his players is infectious"

It turned out Ralf and I had very similar views about counter-pressing and transitions. Getting to know him then introduced me to a lot more detail in the game, and a deeper way of thinking about football.

He has gone on to be a huge influence on me and my philosophy.

It’s no surprise to me that so many successful coaches – such as Thomas Tuchel (below), Ralph Hasenhüttl, Jürgen Klopp and Julian Nagelsmann – have learned from Ralf.

The intensity he demands from his players is infectious. His modern style of football has had a huge impact on so many different clubs and coaches in Germany.

But everyone has had to interpret his ideas in their own way – and, of course, it’s the same for me.

The first important strand of my philosophy is getting the players to buy in to my ideas. I like to call it ‘creating internal belief’.

To create this belief, I introduce my tactical details in as simple terms as possible. Ralf showed me it’s important to keep vocabulary and ideas simple, and to avoid making anything too unnecessarily complicated.

The more of a common understanding of those details among the players, the easier it is for them to put the ideas into practice. “Success is the sum of the details,” as Harvey S Firestone, a 19th-century American inventor, said. I love that saying and I use it with my players.

Key to my way of playing is the idea of pressing to score goals; not thinking about possession when you win the ball, but thinking about how to get the ball forward and score as quickly as possible.

I use an acronym – S.A.R.D. – to try and break my ideas down for the players.

The ‘S’ stands for sprinting. Like any coach, I want my players to run a lot and cover plenty of ground – but for me it’s more about how and when we sprint. It’s really important when we’re in pressing mode; we often make twice as many out-of-possession sprints as we do when we have the ball.

The ‘A’ stands for alle gemeinsam – or ‘all together’. Our pressing is ball-oriented rather than man-oriented, so when we start to attack the ball, we always do it all together. Any individual who presses the ball has to be able to trust that there are others behind them.

That might mean we have five players pressing only two or three opponents, and opposition players will be left free on the opposite side of the pitch – but my belief is that the risk is worth doing that due to the potential rewards. If we can crowd a few opponents, it makes it very hard for them to switch play to the free players.

The ‘R’ is for reingehen – or ‘going in’. This is a commitment to attack the ball; to attempt to win it and run all the way through.

I don’t want my players to stop one yard short of their opponent and worry about blocking passing lanes or getting beaten. When we go all the way and all together, the chances of being successful – of winning the ball and scoring a goal – are much higher.

The last letter, the 'D', stands for dazukommen. This is the second wave of the press. Every individual wave of our press has to be backed up by another round of players. Again, this really increases the chances of success.

S.A.R.D gives the players the tactical details of my plan and helps them understand that they all need to be totally committed to the plan. If there’s any weakness – any lack of commitment – we are all weaker.

Formations aren’t really so important to me. We have used lots of different formations in my time at Salzburg, and I try to keep common themes in how we play and press rather than be consistent in the shape we play.

I ask my players to press when a pass is made and the ball is travelling; not when it has been received, as that would give the opponent too much time on the ball.

Once that pass is made and we start to press, everyone goes. We commit lots of players to the ball, but remain aware that we will have to sprint back into our shape if the opposition manage to switch play.

Those tactical details are crucial, but I believe having the right mentality is almost as important, so it’s something I put a lot of time into getting right. People at Salzburg almost make fun of me because I use the word ‘mentality’ so much.

"i tell my players: being aggressive is always better than being passive"

At the core of my philosophy is playing with tempo. It’s about playing the game at a faster speed than the opponents can handle, while arranging ourselves so we are always ready to strike to win the ball and attack. I want my players to outrun and outthink the opposition, so we are one step ahead whenever possible.

I want total commitment and belief. I want the players to feel this isn’t just a style of play; it’s a way of life.

If you want something, you go out and get it. You don’t wait for it to happen. You are the aggressor. You are proactive.

I tell my players: being aggressive is always better than being passive.

This positive, proactive mentality has to be a big part of what we do. I tell my players I want them to go ‘all in’.

I knew what I meant when I first introduced that phrase to my team, but I actually asked the players to define it.

They came up with ‘giving everything you have to the group at all times’ and ‘the more you give, the more you get’.

I think those two lines capture the idea perfectly. It’s about togetherness and taking ownership of their situation.

The fact that they defined it means they hold each other to their own standards, and they will be disappointed in anyone who does not stay true to what they created. They will feel let down, and – hopefully – nobody will want to do that to their peers.

“Empty the tank!” I tell my players. Break through the mental fatigue barrier and give absolutely everything.

Youth and development is really, really important to what I do. Erling Haaland (above), Dominik Szoboszlai, Takumi Minamino and Tyler Adams are four well-known examples of players I’ve worked with in their younger years.

One of the players I’m most proud of, though, is Aaron Long.

He was bouncing around the second division in the US, mainly as a number six – in defensive midfield. I watched him play and decided to bring him to New York Red Bulls, but I told him: “I don’t want you as a midfielder; I want to work on you at centre-back.”

I also decided he needed a year in the second team, learning our ideals and learning the position. We believed he had huge potential.

He trusted us and bought into our ideas, turning down chances to go into the first team elsewhere. He just had the right mentality.

Now, Aaron’s captain of the national team (below).

We believe in the potential of our players and pushing these players to reach their best. We love to give talented young players opportunities; you will be surprised by what they can do for you if you give them a chance. Sometimes you have to be patient, but it really can pay off.

We try to create people with what we call a ‘growth’ mindset. Those are people who, whenever they fail, they want to know how they can improve; what they could have done better; what they can learn from the process.

It might sound surprising, but in high-level football, the majority of players approach failure with the view that they are talented enough to succeed if they simply try again in the very same way.

We don’t want players like that. We want improvement.

Good people make good players, not the other way around. I love that line, and I think our outlook on development shows how true it is. All the best young players I’ve worked with have had a growth mindset. Simply put: they have wanted to grow.

They’ve bought into my ideas, and given everything to the cause, just like I asked.

Without that 100 per cent commitment to every single training session, to every minute of every match, it just would not work as it does.

Jesse Marsch was our special guest for the February 2021 CV Live webinar, which is free to watch on demand for all subscribers to our coach-education platform, CV Academy. To subscribe and watch, click here.