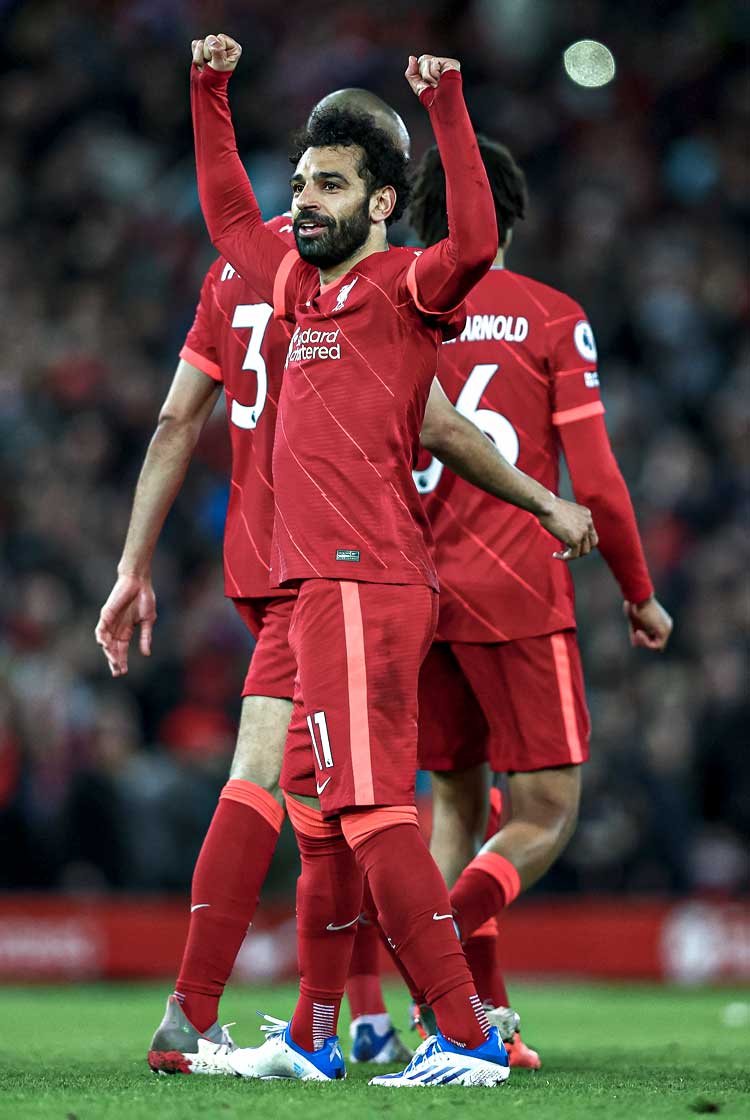 Liverpool leapfrogged Manchester City at the top of the Premier League table – for 24 hours, at least – with a resounding 4-0 win over rivals Manchester United at Anfield. Having won 5-0 at Old Trafford earlier in the season, this result completed Liverpool's best aggregate league score against United in their history, scoring nine goals without reply over the course of two Premier League games in 2021/22. Luis Díaz got the ball rolling with the opener on five minutes, before Sadio Mané set up Mo Salah to double the hosts' lead. Just as United appeared to have a foothold in the game, Mané stroked home to make it three, before Salah wrapped up the win late on.

United manager Ralf Rangnick bemoaned the gulf in class between the two teams. “It is embarrassing, it is disappointing, maybe even humiliating,” he said. “We have to accept they are six years ahead of us now. We have to be critical of ourselves. The way we played in the first 45 minutes was in no area what we wanted to see.” Jürgen Klopp was far more pleased. “It was top level, a great night, nothing to moan about football-wise,” he said.

Jürgen Klopp set Liverpool up in a 4-3-3 formation, with Luis Díaz, Sadio Mané and Mo Salah selected as the front three (below). Attacking Manchester United’s 5-3-2 out-of-possession shape allowed for full-backs Trent Alexander-Arnold and Andy Robertson to push on out wide and stretch the United midfield horizontally, opening up gaps inside. The absence of two United players out wide – ordinarily a full-back and wide midfielder – meant that Liverpool could play with Salah and Diaz wide, with deeper support from the full-backs, or move Salah and Diaz inside and push the full-backs high to create five points of attack. The formation alone cannot be the reason for Liverpool’s complete domination, but the deployment of individuals within it, the strategy and the passive indifference of the United players led to an exceptionally one-sided affair.

Liverpool looked to play quick, one-touch football that drew United players towards the ball. The distances and angles between the United players were inconsistent throughout, and their tendency to look at the ball left them unable to effectively track runners back towards their own goal – a failing cruelly exposed by the hosts in scoring their opener in the first five minutes (below). United too often pressed individually rather than as a collective, with the result that Thiago and Fabinho were repeatedly allowed to receive facing forwards and play passes between the lines or in behind the visitors’ defence. United used their outside centre-backs to drop in with Liverpool’s attackers when they moved towards the ball, but the absence of any compactness from the rest of the defence and midfield around them proved suicidal. Liverpool exposed this with relentless forward running off the ball in behind, as their opponents unravelled.

Although nominally playing as part of a midfield three, Liverpool captain Jordan Henderson frequently took up a more advanced role in the right half-space, outside United’s midfield. With United neither sitting back and allowing Liverpool possession nor pressing with any form of consistency, the hosts – through Thiago in particular – were regularly able to slice through them (below). Henderson’s advanced position, coupled with at least one and often two players outside him on the Liverpool right, gave United a problem. Left wing-back Diogo Dalot and left-sided centre-back Harry Maguire knew they couldn’t move out to cover Henderson because of the threats of Salah or Alexander-Arnold in behind. That responsibility could have fallen to Anthony Elanga, but the young winger regularly got his distances and angles wrong. As a result, Liverpool found it too easy to find Henderson and build more and more attacks from the right inside channel.

One of the key features of Liverpool’s play was the fluidity of their positional rotations. Robertson and Alexander-Arnold’s ability to affect the decision-making of the opposition defensive line through their forward runs (below) cannot be underestimated, while the team as a whole had a clear mantra of ‘play forward, run forward’. Essentially, Liverpool looked to use six players – Henderson, the full-backs and the front three – ahead of the ball, to rotate and disrupt the United defensive shape, and create gaps in behind to exploit. Behind this front six, Thiago and Fabinho dictated play with the ball and, without it, offered security in front of Virgil van Dijk and Joël Matip. With this in mind, it’s no surprise that Liverpool registered 73 per cent possession and effectively killed the game as a contest within the first 22 minutes.

Manchester United used a 3-4-3 formation in possession, with Phil Jones coming in at the back (below). The idea behind the shape was to have a solid base of five players that would be able to cover the width of the pitch and deal with Liverpool’s fluid movements, as well as having numbers ahead of the ball to launch dangerous counter-attacks. The reality was that neither of those aims came to fruition. United saw so little of the ball that they could not sustain any period of attacking pressure. Credit should go to Liverpool here, as the hosts pressed relentlessly, with short distances between individuals and units – a genuine, effective collective press that caused several turnovers of possession quickly after United had won the ball.

Failure to get in behind

United’s main strategy when they had the ball was to try and access the space in behind Liverpool’s high line as quickly as possible. If United managed to evade Liverpool’s press and find themselves in a position where they had a platform facing forwards, the attacking players ahead of the ball would look to get their chests facing the Liverpool goal as early as possible and make runs in behind (below). While there were several opportunities for United to get in behind, the timing of their runs was poor. Passes either missed their target, Alisson swept up effectively, or the United attackers were caught offside. United didn’t have any other method of attack that they could utilise to any real effect, so they posed very little attacking threat throughout the game.

Change of shape came to little

At half-time, Ralf Rangnick changed shape from a 3-4-3 to a 4-2-3-1, with Jones replaced by Jadon Sancho. With United having generated an xG of 0.00 in the first half, it wasn’t difficult for the change in approach to improve the visitors – and it did to an extent, but the game was extremely unlikely to ever become a contest again. Liverpool eased off when out of possession and allowed United to have some of the ball – though still the visitors could only muster 27 per cent possession. United looked to stretch the play high and wide with their wide attackers (below) to stretch Liverpool’s defensive unit, and to leave their attacking midfielders in space outside of Liverpool’s midfield three. This increased United’s options in possession, but Liverpool’s players made quick recovery runs back towards their own goal, and the hosts got into their defensive shape far more quickly than United. Although United improved, Liverpool remained in complete control.