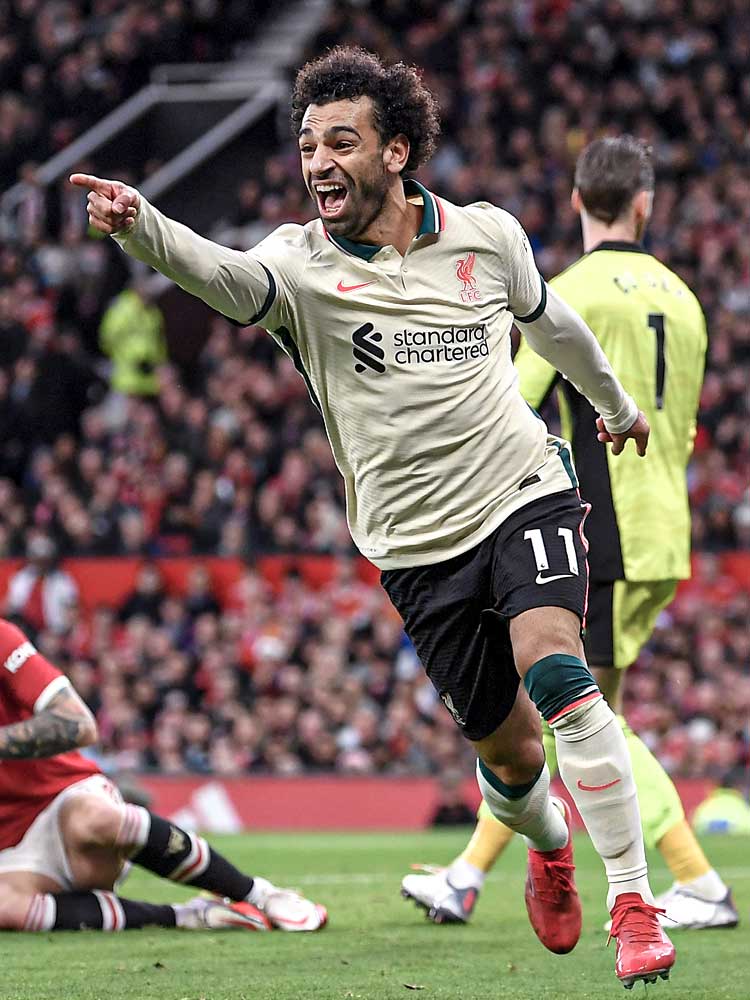 On a record-breaking afternoon at Old Trafford, Liverpool piled the pressure on Ole Gunnar Solskjaer by inflicting on Manchester United their joint biggest ever home Premier League defeat. Once Naby Keïta and Diogo Jota had put Liverpool 2-0 up, Mo Salah scored the first ever Premier League hat-trick for a visiting player at Old Trafford; any chance of a comeback was then ended when Paul Pogba was given a straight red card for his challenge on Keïta. It was a historic defeat which will live long in the memory – for different reasons – for both sets of fans. "It's not easy to say something, apart from it's the darkest day I've had leading these players," Solskjaer said afterwards. "We weren't good enough individually or as a team. You can't give a team like Liverpool those chances and unfortunately, we did." "It is a really good day – a big one," said Jürgen Klopp. "This is a little chapter in the history of the club. People will talk about it in the future because it won't happen again in a long time, if ever."

Attacking from the left
Manchester United largely focused on attacking from the left and into the spaces around Trent Alexander-Arnold, partly to draw Mo Salah into deeper territory. Bruno Fernandes drifted towards the left from his starting role as their number 10 to provide support between Luke Shaw and one of Marcus Rashford and Cristiano Ronaldo, who often rotated. They therefore lacked numbers on the right, where Mason Greenwood and Aaron Wan-Bissaka did not get the same support from Fernandes. The concession of early goals, and Liverpool therefore committing a central midfielder to defend near Salah and Alexander-Arnold, meant that United thereafter posed too little attacking threat.

Struggling with Liverpool's press
The aggressive and compact high press applied by Liverpool put United under intense pressure when they were attempting to build possession. Salah moved infield to alongside Roberto Firmino, and between them they focused on pressing United’s central defenders, and pushing possession further infield. James Milner and Naby Keïta took Scott McTominay and Fred, and Diogo Jota and Alexander-Arnold prioritised their opposing full-backs to discourage switches of play.

Counter-attacking threat
It was during moments of transition when United demonstrated some attacking potential. If Liverpool conceded possession in the midfield third or United broke forwards after an attack deep inside their defensive half, they targeted the spaces in behind Liverpool’s advanced full-backs. With their midfield three seeking to protect the spaces in front of their two central defenders, United played possession wide, often via Fernandes rotating with a wide forward, who in turn linked play as their 10.

Changing shape
Ole Gunnar Solskjaer reorganised his team to attack with a four-diamond-two led by Rashford and Ronaldo, and featuring Fernandes at the tip of their diamond and McTominay at its base. With Fred and Paul Pogba as their two number eights, Shaw and Wan-Bissaka provided their width until either Rashford or Ronaldo started to pull wide to the left – and was replaced in their front two by Fernandes. Runs made beyond the outside shoulders of Liverpool’s central defenders helped United to penetrate forwards, as did Rashford or Ronaldo cutting infield from the left, but Pogba’s dismissal then meant their attacking threat permanently disappearing.

Exploiting United's press
United attempted to use a wide press to establish pressure early on against Liverpool's build-up, but the visitors impressed in playing through it. When Greenwood and Wan-Bissaka failed to co-ordinate their press, Liverpool penetrated forwards through Firmino dropping, Salah moving infield, and Keïta pushing forwards. United’s back line were then faced with an overload, and Liverpool attacked through the right inside channel against Shaw on the far side.

Playing between the lines
Liverpool’s left side provided the base for their attacking play, and clever movements into the spaces between the lines gave them opportunities to work the ball back inside, to behind United's double pivot. Once United’s back line had been drawn across, space appeared on the right and in the inside right channel; from there, Liverpool's clinical finishing led to them taking the lead early.

Converting to a 4-2-3-1
Once in control and comfortably leading, Liverpool often converted into a 4-2-3-1 – especially during prolonged spells of possession. James Milner – and then later his replacement, Curtis Jones – dropped into a position alongside Jordan Henderson to form their double pivot. Jota then moved into the inside channel, and their full-backs provided their attacking width. Firmino dropped into a position between Jota and Keïta – who moved towards the right – which meant creating an overload against United’s double pivot. Salah then became their most advanced forward, drifting between positions in the centre and on the right; Liverpool built on the left, but penetrated into the right inside channel.

Seeing out the game out wide
With victory all but secured by half-time, and then a further goal and Pogba's red card early in the second half, Liverpool kept Henderson as their single pivot. Their number eights Jones and Alex Oxlade-Chamberlain widened during build-up phases, when United converted to a back five and their midfield and attacking units stayed narrow. The wide areas therefore became an obvious route for Liverpool to keep possession, control play, and see out their win.