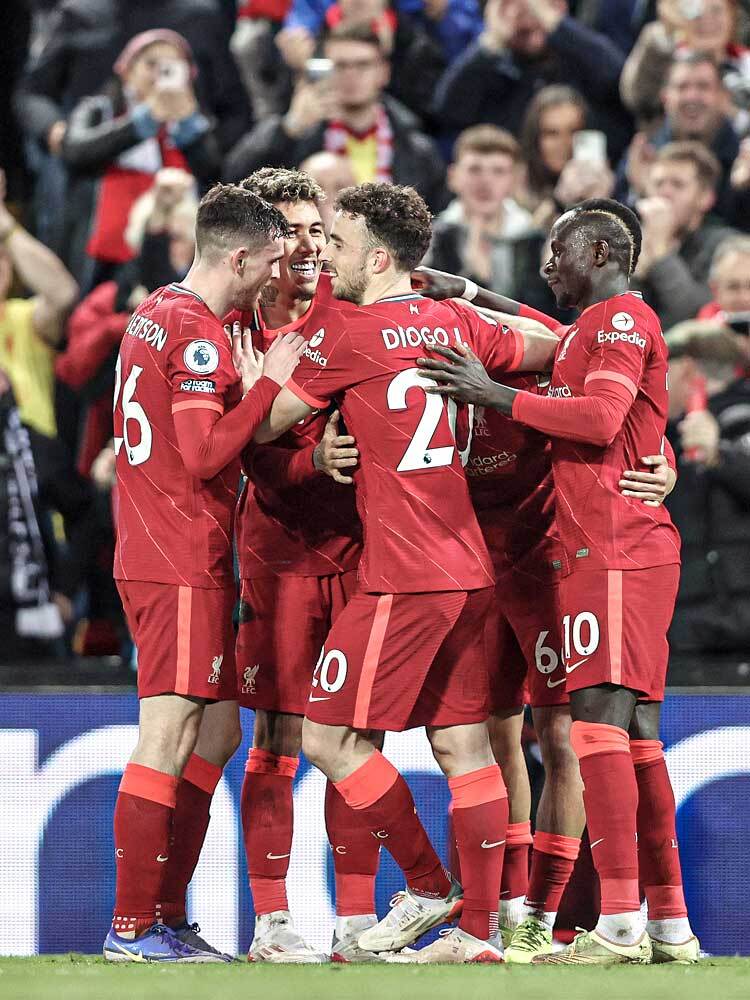 Liverpool survived an early scare against Eddie Howe's Newcastle to come from behind and make it six consecutive Premier League wins. On a night when title rivals Chelsea dropped points at home to Everton, Jürgen Klopp's side maintained pace with Manchester City at the top of the table thanks to goals from Diogo Jota, Mo Salah and Trent Alexander-Arnold, following Jonjo Shelvey's early opener.

"The opponent threw everything at the game and went 1-0 up – this is the recipe for a difficult game," said Klopp. "But we still won it [and we] absolutely deserved it." "I think when you play at Anfield and you've got the lead, suddenly [after Jota's goal] the crowd are in the game," said Howe. "From then on, Liverpool are on the up and that made it very difficult from that moment onwards."

Asymmetrical shape
Up against Newcastle’s 4-5-1 low block, Thiago and Jordan Henderson split to build either side of Liverpool’s centre-backs. Set up in a 4-3-3 structure, the width on the left was provided by Andy Robertson, with Sadio Mané moving inside to join Diogo Jota centrally (below). On the right, Alex Oxlade-Chamberlain moved into positions between the lines, beyond Newcastle’s midfield five. Mo Salah held the width on the right side, with Trent Alexander-Arnold supporting with overlaps or narrowed movements inside from right-back.

Wide rotations in the first half
In the first half, Thiago and Robertson rotated on Liverpool’s left, while Alexander-Arnold and Oxlade-Chamberlain did something similar on the right. This ensured Liverpool still had cover and support around their two centre-backs in case of a transition, and they were also able to keep players between the lines. Alexander-Arnold’s movements helped Liverpool as he dragged Ryan Fraser inside and in doing so allowed his teammates to access Salah more easily (below). On Liverpool’s left, Newcastle’s Jacob Murphy tracked Robertson, which then created space for Thiago to attack.

Central combinations after the break
Liverpool placed more focus on central combinations in the second period, with Alexander-Arnold supporting the two deeper central midfielders during build-up. With Oxlade-Chamberlain still between the lines, Liverpool retained a central midfield three. Salah and Robertson provided the attacking width to stretch Newcastle, but it was Alexander-Arnold’s positioning which pulled Fraser out of position (below), and created more room in the right inside channel for Oxlade-Chamberlain – or Salah when moving inwards – to receive.

Focus in threes on the inside channels
Newcastle eventually reacted and narrowed their midfield unit. With their wide midfielders dropping back to support the full-backs – sometimes so far they formed a back six – Liverpool built around the outside of Newcastle’s central midfield three. Mané and Jota, who initially stayed central, frequently drifted to the left to support Robertson, and made runs into the inside channel (below). On the right, Liverpool kept Salah wide, with Alexander-Arnold and Oxlade-Chamberlain providing similar movements to Mané and Jota through the inside channel.

Wide counter-attacks
From their deep block, Newcastle counter-attacked using lone centre forward Allan Saint-Maximin, who targeted the space in behind Liverpool’s advanced full-backs. He was often supported by wide midfielders Murphy and Fraser, who made narrow runs towards the centre, because Saint-Maximin often dragged both of Liverpool’s centre-backs towards the ball. Isaac Hayden added support from Newcastle’s central midfield (below), with Jonjo Shelvey and Joelinton covering underneath, ready to battle for the second phase – as the visitors’ early goal showed.

Attempts to keep the ball
In the rare moments where Newcastle sustained possession from their 4-5-1 – up against Liverpool’s 4-3-3 – Saint-Maximin dropped from his centre-forward position, and both wide midfielders moved narrow, attempting to run inside Liverpool’s full-backs. Numbers eights Hayden and Joelinton supported through the inside channels, with Shelvey in a deeper role, and the visitors overloaded Liverpool’s central midfield three with the help of Saint-Maximin. Newcastle's full-backs pushed forward whenever possible (below), but given the visitors struggled to maintain possession for long periods, they didn’t have much chance to push their full-backs on.

Focus on the left
Saint-Maximin drifted towards Newcastle’s left side more in the second period, and Fraser then moved infield both with and without the ball. Hayden, as the right-sided number eight, then pushed forward much earlier, ensuring Newcastle had a central presence who penetrated in behind. On the right, Murphy held his position, while Ritchie pushed forward from left-back, and Joelinton held his position in midfield to support Shelvey, almost as a double pivot (below).

Quick switches out to the right
When Hayden stayed forward and occupied Liverpool’s centre-backs, Saint-Maximin moved to the left, helping Ritchie and Fraser progress with the ball. Murphy then moved infield to create space for Javier Manquillo to overlap (below). When Newcastle moved Liverpool over to the left, they then looked to switch play quickly to exploit the space on the right. Although the initial combinations helped Newcastle progress forward, the away side did not keep the ball long enough to develop consistent patterns that worked. The depth of their low block also made it harder to keep the ball and move higher up the pitch.