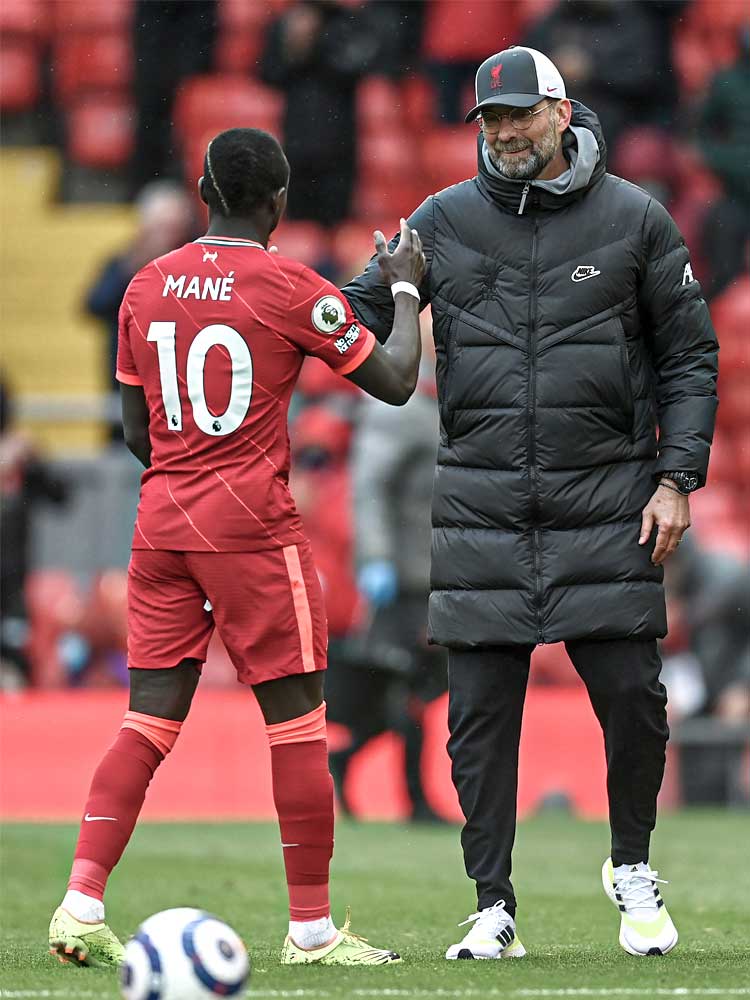 Liverpool finished an often difficult season by securing qualification for the Champions League. Poor runs of form and injuries suffered by several influential players ensured that they sacrificed their Premier League title, but a goal in each half from Sadio Mané in what is widely expected to be Georginio Wijnaldum's last match at the club and also Crystal Palace manager Roy Hodgson's last in management, secured all three points and ensured that for the second successive year, Leicester City missed out on the top four on the season's final day. "If someone told me five, six, eight weeks ago we can finish the season in third, it was out of reach, barely possible," said Liverpool's manager Jürgen Klopp. Hodgson, 73 and one of his predecessors at Anfield, said: "I have to come to terms with the fact my last game has been played and I am pleased that last game has been played at Anfield. This is one of the temples of football."

Liverpool were organised by their manager Jürgen Klopp into a 4-3-3 formation led by their favoured front three of Mo Salah, Roberto Firmino and Sadio Mané. Their visitors, Crystal Palace, defended with a 4-1-4-1 and either a mid or lower block.

As is so often the case, Trent Alexander-Arnold and Andy Robertson provided Liverpool's attacking width from full-back, and were therefore covered by Thiago Alcântara and Georginio Wijnaldum. There were regardless occasions when Salah remained wide to combine with Alexander-Arnold – ordinarily when Palace had increased numbers towards one side of the pitch – and, if possession wasn't switched, they built around those numbers with quick combinations before targeting Mané and Firmino. Salah also made runs in behind to pursue more direct passes from the defensive third – those runs were often across Palace's defensive line, but became more central after his first touch.

Liverpool threatened during open play and succeeded in finding spaces behind Palace's defence, but it was after a set-piece that they took the lead, when following. a corner, Mané finished from close range. Towards the left, from where Mané consistently attacked infield, Robertson, who waited for possession to first reach Wijnaldum or the final third, sought to overlap.

Robertson's relative reluctance to advance contributed to Wijnaldum advancing and and receiving between and beyond Palace's midfield three. Thiago more regularly withdrew to towards possession, and even either featured as an additonal defensive midfielder alongside Fabinho or replaced him at the base of their midfield. Wijnaldum's positioning contributed to him making runs into the penalty area, similar to those made by Salah when he was the target of direct passes in behind.

Further approaches involved Alexander-Arnold, when he received possession in deeper territory, attempting to bend passes in behind, and Robertson driving forwards and seeking to combine with Mané. With the latter remaining in more central positions, Firmino less regularly withdrew into deeper positions, and instead drifted towards the right inside channel, particularly when Salah had moved wide. It was when Thiago and Wijnaldum moved towards the opposite side of the pitch, later in the afternoon, that Firmino had increased freedom to move.

Liverpool's increased variety made them capable of regularly making the adjustments required to target the spaces  that emerged within Palace's defensive block – those between wide and central midfielder were particularly favoured. That ability enhanced their dominance of possession; Mané scoring their second as they countered rewarded that.

Roy Hodgson favoured a 4-3-3 formation for Crystal Palace, who on this occasion were led by a front three of Jordan Ayew, Andros Townsend and Wilfried Zaha. Liverpool remained in their long-term 4-3-3.

Palace initially sought to counter into the spaces behind Liverpool's advancing full-backs, so their direct forward passes prioritised those areas. They built from the first and second phase of aerial balls that were played away from Liverpool's two central defenders; Zaha, their central attacker, also drifted wide to enhance their ability to counter and in the hope of attacking a defender one-on-one.

On the occasions Palace sought to play into their advancing full-backs, the relevant Liverpool central midfielder moved wide to press, preserving Liverpool's back four and inviting a central defender to track the movements of Zaha, who on those occasions focused on the centre of the pitch. With Liverpool's wide forwards pressing Palace's central defenders, often forcing them to rush their forward passes, Palace's attacking potential was somewhat undermined.

During lengthier periods without the ball, Liverpool prioritised limiting the spaces behind their midfield,  and there therefore existing an increased space behind their front three, from where James McCarthy provided the link from defence and into the wide areas and around Liverpool's narrow defensive block. Palace's direct passing also lacked a focal point and aerial presence to target, which meant that Liverpool's intensity in defence and ability to win their individual duels regularly negated their attempts to attack. Even on the occasions Palace had possession in wide territory in the attacking half, they offered too little threat around Liverpool's central defenders, because Zaha too often had to abandon his position to contribute to them securing the ball.

In their efforts to overcome that one of Palace's central midfielders moved towards an opposing central defender, increasing their numbers in the final third both when they were countering and retaining the ball, but even then they lacked the necessary attacking presence to stretch Liverpool and to create. Palace's early forward passes helped them beyond the aggressive counter-press Liverpool applied in midfield, where the hosts otherwise dominated in moments of transition, ending Palace's attempts to attack.

When Cheikhou Kouyaté replaced the injured James Tomkins in central defence, and Jeffrey Schlupp replaced Kouyaté in midfield, Schlupp's runs to support into the wider areas and the timing of his runs increased their attacking threat. They regardless had too little grasp of possession, and struggled to progress beyond where Schlupp was supporting, to create convincing goalscoring chances.