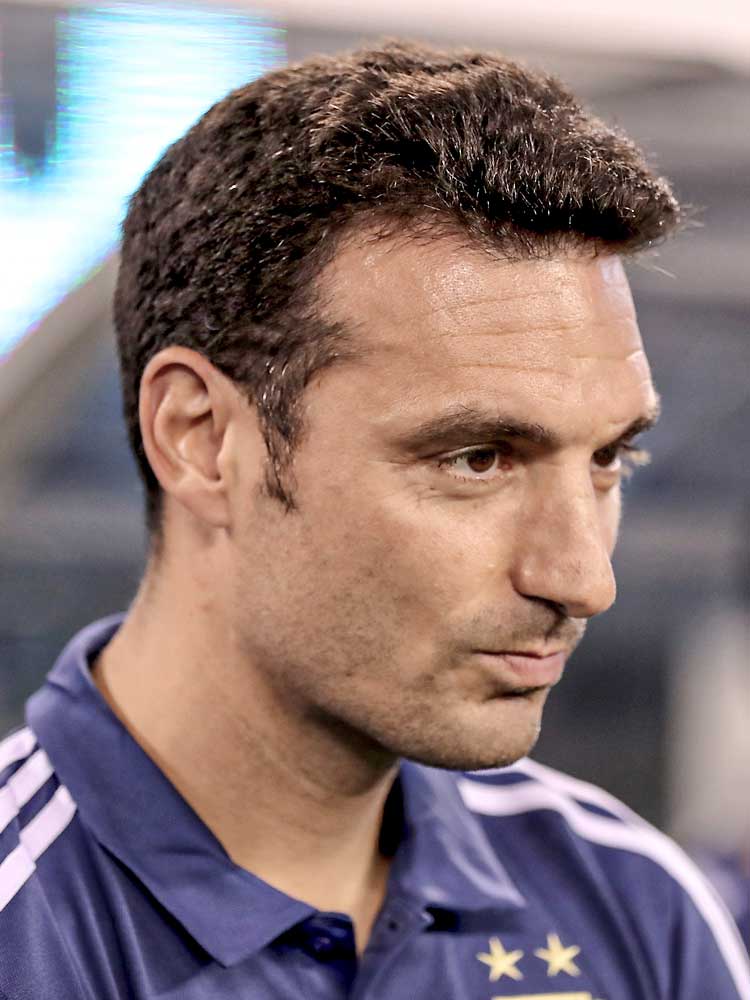 Profile
In the 2021 Copa America, Lionel Scaloni led Argentina to their first major trophy for 28 years. Considered an inexperienced figure at the time of his appointment, initially on an interim basis, when aged 40 he arrived after their disappointing performances at Russia 2018, he has also succeeded in helping his players to rediscover a sense of unity and purpose.

A similarly intimidating task could yet follow, should Messi's international football career conclude while he remains in his position. "It is a huge title, especially for our people; I hope that the Argentines enjoy it," he said of their Copa America triumph over rivals Brazil. "The fans support the team unconditionally. They can identify with this team that never gives up."

Playing style
Scaloni's first teams featured a back four that, through featuring a player of the nature of Juan Foyth at right-back, gave them the flexibility to build with a back three. Doing so meant that width was sacrificed on the right; Nicolás Tagliafico overlapped from left-back and around the narrow midfield that existed in either a 4-4-2 (below), 4-3-3 or four-diamond-two, in the knowledge that when the former was used, their left-sided midfielder would drift infield; Tagliafico also occasionally instead moved infield.

They have consistently sought to build patiently and dominate possession. Their central defenders split and a central midfielder withdraws to, with their goalkeeper, form a diamond around the opposition's most advanced pressers, when there exists the versatility to build around pressure, often via direct passes to their full-backs – even if opponents commit an additional player to that press.

Lautaro Martínez and Messi from Scaloni's favoured front two. Martínez mostly remains advanced and works to discourage opposing defenders from advancing, and Messi is given significant freedom to contribute from deeper territory when attacks are being built, which he so often does by prioritising withdrawing into the right inside channel, from where he also makes forward runs to contribute to direct play towards the right. Leandro Paredes' passing range complements Messi both when he makes those forward runs and when he is positioned between the lines.

For their triumph at the 2021 Copa America, Nicolás González was regularly selected as Scaloni's left-sided midfielder. Where, previously, Sergio Agüero may have been selected wide and then encouraged to move to operate as an additional striker, or Marcos Acuña to move into central midfield, González retained his width; a starting central midfielder instead advanced through the left inside channel to support Tagliafico if Acuña wasn't also instead used as a more defensive left-back.

When González is on the left, Argentina's right-sided midfielder instead moves infield, in turn encouraging Messi to drift wide (above) and therefore to receive and create from outside of their opponent's defensive block while supported by their right-back. Gonzalo Montiel and Nahuel Molina have both proved effective at enhancing their attacking balance from behind Messi, and from outside of either Rodrigo de Paul or Ángel Di María resisting moving from their position as their right-sided central midfielder.

With both full-backs increasingly advancing at the same time, a central midfielder is, when required, instructed to move to support the two central defenders behind him by forming a different back three. It is against lower defensive blocks that doing so is resisted, and when both wide midfielders advance to operate as wide forwards and therefore create a front three; their full-backs provide their attacking width, and Messi operates as a playmaker from a central position (below).

Central combinations have consistently been influential in Argentina's attacks under Scaloni, and some have evolved from their efficient high press. The options they offer in the centre of the pitch and their effectiveness from wide territory are targeted by passes from the defensive third that mean that they can continue to build possession when Paredes has been covered.

Set-pieces have proved a further strength. Messi poses a threat from direct free kicks, and, in addition to Messi, Paredes and De Paul provide variety from corners and wider deliveries. Five players occupy the penalty area at those set-pieces – the strongest, aerially, are often towards the near post – and those prioritising the second ball play a reactive role that draws markers or creates space for teammates, even if a shorter set-piece routine is preferred.

Defending and pressing
Scaloni favours an aggressive press that is applied upon losses of possession and that involves his team defending well into the attacking half of the pitch. They have also demonstrated a desire to force possession wide when regains are unlikely, or when their high press is unlikely to succeed. The existence of two central midfielders provides them with the reliable transitional foundation they require and, regardless of their defensive approach, a 4-4-2 is retained.

On the occasions they are defending with a lower block (above), aggressive pressure continues to be applied through the centre of the pitch to attempt to force the ball wide, in the knowledge that their two lines of four are effective at defending against any crosses likely to follow. Further forwards, Messi and Martínez remain advanced and positioned away from opposing defensive midfielders, and ultimately braced to launch potential counters. From that lower block Argentina's priority in wide territory becomes one-on-ones, which means that, not unlike the approach overseen by Marcelo Bielsa, players are mostly responsible for their direct opponent. Regardless of how far an opposing full-back may venture, the wide midfielder opposite him is responsible for tracking his run.

To that end, Scaloni has increasingly favoured versatile wide midfielders, instead of relying on his talented attackers to defend at key moments. Their central defenders are given responsibility for the balls that are played back infield, and for their overall organisation, which means ensuring that they remain sufficiently compact that penetrative passes are prevented and then becoming aggressive when their defensive block is progressed through.

When their high press is being applied (above), the wider midfielders in Argentina's 4-4-2 support their front two in pressing their opposing back four. That same front two initially screens access into the opposing defensive midfielders before moving to instead take the relevant central defenders; when they do so, the central midfielders behind them also advance in preparation for anything that progresses beyond their teammates, and the far-sided wide midfielder drifts infield to where his central midfield teammate had moved from. Behind them, Argentina's full-backs remain withdrawn to defend against direct forward passes while being willing to advance should the wide midfielders in front of them move to take their opposing full-back. it is perhaps the speed of their press that impresses most; when possession is then successfully forced wide, their defensive line is trusted to defend potential two-on-twos or three-on-threes.

It is when a 4-3-3 proves Scaloni's preference that a mid-block (above) is likeliest to be used, even if from that 4-3-3 there are still moments when they defend with a 4-4-2 via one of their front three withdrawing into midfield – enhancing the need for their wide players to be flexible. Regardless of their change in shape, there remains an emphasis on forcing the ball wide – often achieved by the relevant wide midfielder and full-back working to press together – particularly when opponents keep players withdrawn to defend against Messi and Martinez. Scaloni's other outfielders, in turn, drift across to cover their remaining opponents, and the closest attacker works to press backwards passes from behind.

When defending corners, three players form a staggered zonal defence, and the others defend one-on-one. Should the opposition offer an additional player towards the corner, the closest zonal defender is given the responsbility to move and press shorter deliveries. That same one-on-one defensive approach exists when close-range free-kicks are being defended; those from further out are defended zonally, via prioritising spaces and runs towards the penalty area.