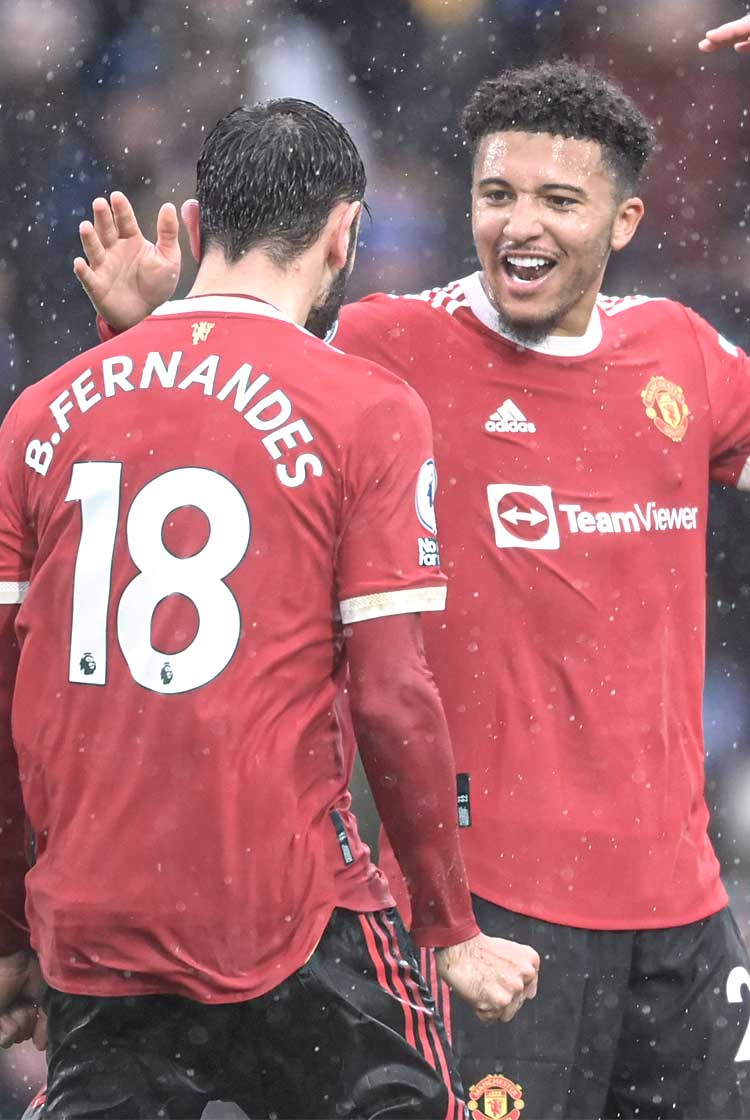 Ralf Rangnick earned what he described as "an important win" as Manchester United beat rivals Leeds 4-2 at Elland Road. The match was typically spiky, with nine yellow cards shown in the second half, and plenty of drama at both ends of the pitch. United went in 2-0 up at the break, but were pegged back as Leeds scored two goals in the space of 24 seconds early in the second half. Rangnick then introduced Fred and Anthony Elanga, and was rewarded for doing so – both substitutes scored to reinstate United's two-goal lead.

"We knew that it was an important win today," said Rangnick. "It was perfect with regard to maturity, unity and the best reply that they could give to some articles last week that there was some disruption in the locker room."

"Due to the absence of players, the composition of the midfield doesn't have a defensive profile and that had an influence in the defensive behaviour of the team today," said Leeds manager Marcelo Bielsa.

Leeds United were initially set up in a 4-2-3-1, while Manchester United converted into a 4-4-2 when defending. Rodrigo began as the centre-forward, dropping into midfield to receive away from the visitors’ centre-backs. Jack Harrison and Daniel James held very wide positions in an attempt to create gaps in United’s back line and space for Rodrigo to drop into. With the inside channels often left vacant due to Harrison and James’ wide positions, Adam Forshaw would push forward from the double pivot (below). Number 10 Mateusz Klich also made forward runs through the middle of the pitch to help connect Rodrigo with the wingers.

Robin Koch was initially used in the double pivot with Forshaw, but he was withdrawn due to injury. Pascal Struijk then moved into the single-pivot role from centre-back, with the hosts forming a 4-3-3 shape. Forshaw and Klich played as the number eights, operating on the outside shoulder of the Manchester United double pivot. This also increased the space for Struijk to receive from the back line (below). United’s out-of-possession front two failed to block access to Struijk, with Leeds frequently breaking through or around United’s first line. However, the issue for the home side was converting possession into chances; in the first half, they were largely unable to penetrate past the visitors’ back line.

Leeds stuck with a 4-3-3 after the break, but Struijk dropped back in as a centre-back. Raphinha was introduced on the left, with Joe Gelhardt brought on up front. Rodrigo then dropped into midfield as one of the number eights, with Forshaw playing as the single pivot. Rodrigo’s wider movements proved key in the second half, as the home side no longer kept both eights in central positions. He frequently helped connect Leeds’ full-back to the winger, breaking around United’s 4-4-2 mid-block. Klich then provided forward runs to support Gelhardt (below), and they occupied United’s two centre-backs. This meant United’s full-backs were unable to push forward to deal with Rodrigo’s movements.

The left side proved key after the break

Rodrigo made a difference on both sides of the pitch as he and Klich fluidly swapped positions and moved around the pitch. It was play down the Leeds left that brought them back into the game, as Junior Firpo and James combined to isolate the visitors’ full-back and winger. Rodrigo’s movement pulled United’s double pivot across (below), creating more room in the opposite inside channel. Whenever Leeds could cross the ball from the left, or switch play back inside and access the runners on the far side, they created chances. Here, Klich, Gelhardt and Raphinha – who scored the home side's equaliser – were the key targets on the right.

Manchester United were set up in a 4-2-3-1 formation by Ralf Rangnick, and Leeds defended with their aggressive man-marking approach in a 4-2-3-1 shape. Jesse Lingard moved inside from the right, creating space for Aaron Wan-Bissaka to push forward from right-back. With Jadon Sancho holding the width on the left, Luke Shaw was more limited in how far he could advance. Bruno Fernandes dropped in from his number 10 position, with the visitors creating a four-man midfield box (below). However, Leeds’ man-marking meant United could not create the central overloads they wanted. This meant a significant focus on individual play during United’s attacks.

To combat Leeds’ man-marking, United centre-backs Victor Lindelöf and Harry Maguire stepped into midfield with the ball as they had a two-on-one overload against Rodrigo. As they dribbled forward, a Leeds midfielder moved towards the ball, helping free up a United attacker to receive and connect into Cristiano Ronaldo or Fernandes. Lingard and Sancho held wider positions, which helped create room for the defenders to step out with the ball and also space for the central midfielders. Paul Pogba often found himself in space (below), while it was Lindelöf driving forward from the back line that led to United’s second goal.

Quality in the inside channels

The individual quality of the United players told as Leeds persisted with their man-for-man approach. Pogba pushed forward from the double pivot, providing extra attacking threat through the inside channels (below). This allowed United’s wide players and full-backs to rotate and move into new positions to receive. Even when the ball wasn’t moved out wide, these movements drew Leeds defenders away from the ball, creating space in the inside channels. United made sure they had plenty of numbers getting into the penalty area, and created some good chances as a result.

Despite Leeds getting back into the game, the visitors eventually regained control following a change of personnel and structure. Fred and Anthony Elanga were introduced, with Fernandes moving into a permanently higher position alongside Ronaldo. Elanga and Sancho played high and wide (below), and the full-backs provided them with support. United’s centre-backs continued to step into midfield with the ball, with Fred and McTominay now forming the double pivot. Two goals on the transition proved the difference, with United working the ball into the front two, before overlapping runs from Fred and Elanga led to the goals that sealed the points.