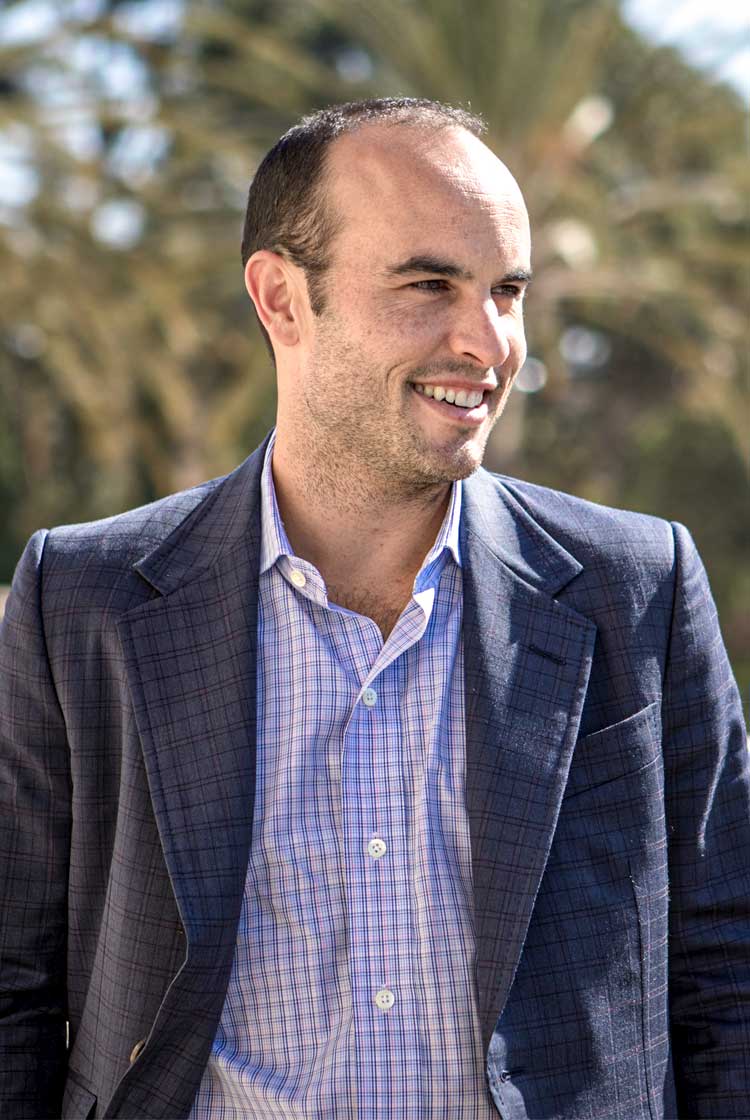 When the USA qualified for the 2002 World Cup, and it became clear that I might have the opportunity to go at 20 years old, it completely consumed me.

So, my goal was to play in college and try to qualify for a World Cup. Professional soccer was barely even a distant dream.

Everything I did once the USA qualified was geared towards trying to make the squad.

When I got the call to say I’d made it, it was one of the best days of my life.

And things just kept on getting better from there.

Not only did I get to play, but I scored at a World Cup (above). What was happening was beyond my wildest dreams.

Then we got to the quarter finals, where we were beaten by eventual finalists Germany. As a child, I could never have imagined that; playing against Germany in a World Cup quarter final.

After the tournament, I was given the Best Young Player award. At the time I probably didn’t realise quite how special that was, but it really is an incredible honour.

“the prospect of moving to play in Europe was so exciting”

I only won that because I was part of a really good team. I was able to play freely with no responsibility. I didn’t have to be the star; nothing was riding on my performance. I could just fit in and play in the way that came naturally to me.

Thanks to Bruce Arena (below) and the team he put together, I was able to flourish. Yes, I played well, but I wouldn’t have been able to without the 22 other players and the coaching staff.

I learned as a player that it’s best to stay present. It’s fine to dream of the national team or a World Cup or to play in Europe – as I was able to – but that isn’t what gets you there.

What gets you there is the process; showing up every day to work and to get better.

That’s what I did every day throughout my playing career, and I was rewarded for it.

When I was 17 years old, Bayer Leverkusen made me an offer.

To be honest, European football was so far away from my reality at that time that I hadn’t even heard of them!

But the prospect of moving to play in Europe was still so exciting, and it was great for me to realise that something like that really could become a reality. After a lot of thinking it through, I decided to take the plunge.

“When David Beckham arrived, it put a spotlight on the players that we weren't used to”

To be in an actual professional environment was incredible for me. I grew there, and it helped me a lot when it then came to playing in the Under-17 World Championship in 1999. I was suddenly ahead of so many of my peers, and I was named player of the tournament.

The one thing that was missing from my time in Germany was games. I didn’t actually get to play any professional matches, so although the experience was undoubtedly a positive one, I needed to be playing games. All I really wanted was to be happy.

I got the chance to go back to America with San Jose Earthquakes (below), and I took it. That turned out to be a really good time in my life.

I was there between the ages of 18 and 22 – really formative years for me. I learned so much in that time, and I just got to play loads of football. More than 100 games in total, and I really improved as a player.

By 2005, though, I’d been away from Los Angeles and my family for six years. I wanted to go home. It was as simple as that.

Most professional athletes don’t get to play in their hometown, but I’m from LA and moving back there was an easy decision. To get to play for LA Galaxy in front of my family and friends in the city where I grew up learning the game was just amazing.

Early on in my career, MLS hadn’t been much of a draw to people from other countries. The money wasn’t great, the facilities were bad, the stadiums and pitches weren’t very good, and the quality of the football was poor, too.

That meant that, for many of my early years back in the US, almost all of the players were American. Players from other countries weren’t really interested in playing Major League Soccer.

So, when David Beckham (below) arrived at LA Galaxy in 2007, it put a spotlight on us that both the club and the players weren’t at all used to.

To be honest, when he first came, it was really challenging. We went from being a big club by MLS standards – which at the time wasn’t at all big in comparison to other sports in the US, or to other soccer teams around the world – to something really noticeable.

It totally changed the dynamic of our team. That would have been a challenge for any team, but it was particularly challenging for us because, honestly, we were a poor team at the time. We were just very bad.

But we worked together to deal with our problems on the pitch, and to stay relaxed despite the pressures of the extra attention. And we came out the other side.

In the end, with David a key player, we became one of the best teams in the history of the league. That was so satisfying, because we put in so much work from the very start.

I was lucky in that I was still able to experience new things even though I’d moved back to LA.

The off-season in America is really long – most players are off from November all the way through to March, which is a long time to not be playing.

“After I retired, nothing grabbed me. Then an opportunity to coach came along”

The Galaxy were kind enough to let me spend the early part of 2009 on loan at Bayern Munich.

Then the following year, I got a phone call out of the blue from my international teammate, Tim Howard.

He was at Everton at the time, and he told me David Moyes was thinking about the possibility of bringing me in on loan. I spoke to both clubs, David and my manager, Bruce Arena, and I think everyone felt like it was a win-win.

For most people in America, the Premier League is probably the most exciting and most relatable league out there. It’s very entertaining and obviously we speak the same language, so it’s very high on our list of places to go.

I had a great time with Everton (above) – so much so that I went back there the next year – experiencing a different lifestyle and a really challenging level of football. It was important to me that I could show I could perform at that level, so I was really glad I was able to go back to Europe for three consecutive years.

I felt like I was able to contribute, so it worked out for everyone. It was a great experience and one I’ll always remember.

Back then, even as I got all these great experiences, played with so many great players and under so many great coaches, I never really saw myself as a coach once I stopped playing.

After I retired, I took five or six years where I just tried a lot of different things. I did some commentating, some media work, took some time away from the game.

But nothing really grabbed me.

Then this opportunity to take over as manager of San Diego Loyal came up in March 2020, and I decided to give it a go.

The timing of it with Covid made the first year challenging, but even with all the difficulties that came with the pandemic, I loved it from the very first minute.

I love being able to impact the lives of the young people I work with.

It isn’t a huge group, but being able to influence 24 or 25 young people here is still pretty powerful. You feel like you can have a real, direct impact on people in a meaningful way.

“I feel extremely lucky, and I don’t take it for granted at all”

That can be on the field or off the field; both are important as a coach. I learned that as a player.

I’ve tried to take everything from my playing days into my coaching. Sometimes I’ll pause during my sessions, because I’ll remember Bob Bradley or Bruce Arena saying something to me in a similar moment – something that will help me get my point across now.

All those experiences have helped me a ton. You’d be foolish not to learn from both good and bad experiences.

There are very few jobs in the world where you get to be outside every day and spend time with a really driven group of young people, who want to achieve something together. Getting to lead that process, I feel extremely lucky – I don’t take it for granted at all.

Other things might intrigue me later down the line, but if I’m at San Diego for the next 40 years then that’s fine.

I’m happy and I’m doing something I genuinely love. That really is special.