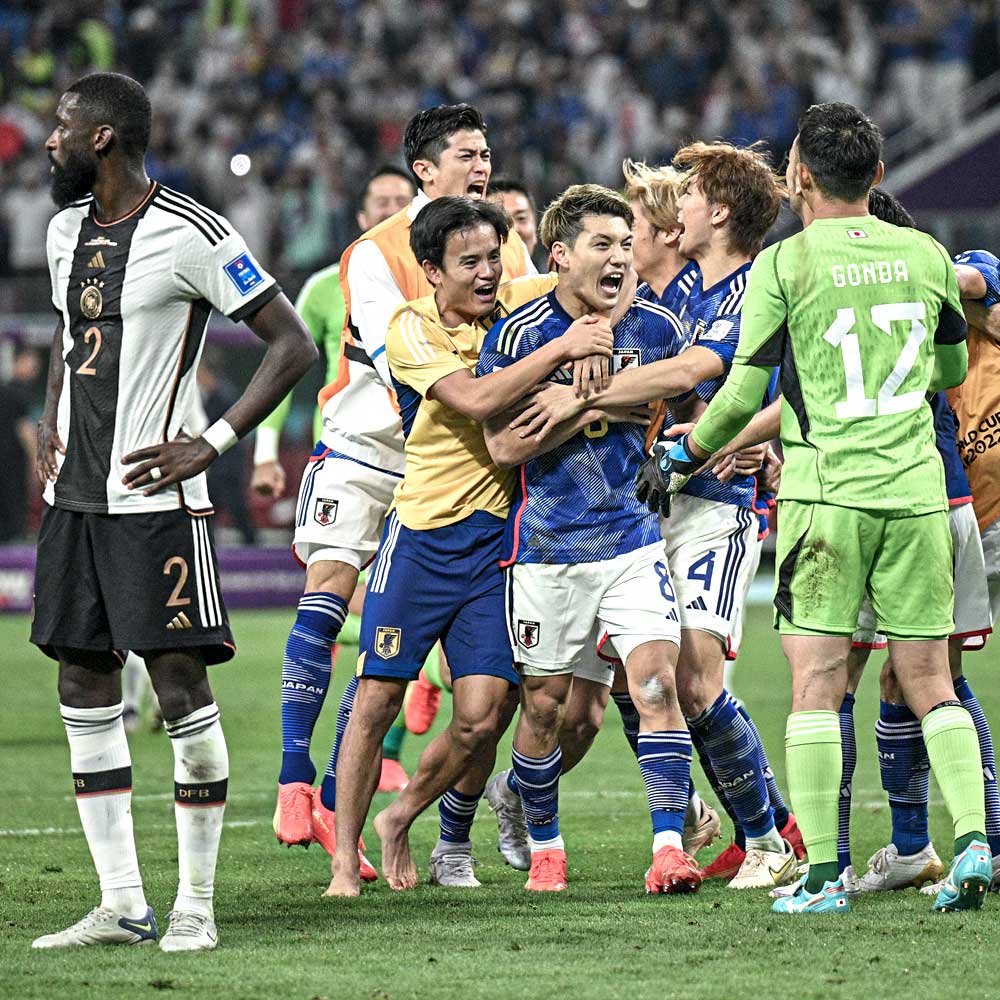 Saudi Arabia produced one of the World Cup's greatest ever upsets by beating Lionel Messi's Argentina on Tuesday. One day later, Qatar 2022 delivered another shock as Japan came from behind to beat Germany.

Hansi Flick's side were predictably among the pre-tournament favourites to win the World Cup, and widely expected to be in a direct battle with Spain for top spot in Group E. However, in an action-packed last 15 minutes here, Germany threw away the lead they had earned through Ilkay Gündogan's first-half penalty. With it, they gave themselves an uphill task if they are to avoid crashing out of the group stage at a second successive World Cup.

Japan took a while to grow into the game, but manager Hajime Moriyasu had a huge impact in the second half, both with his substitutions and a change of shape from a 4-2-3-1 to a 3-4-3. Late on, they struck twice through substitutes Ritsu Doan and Takuma Asano to turn the game on its head. Against all odds, it is Japan who now look likely to make it out of a group containing the champions from two of the last three World Cups.

Converting into a back three

Germany lined up in a 4-2-3-1,  but with Niklas Süle – usually a centre-back – at right-back, they converted into a back three, as left-back David Raum pushed forward (below). This gave Germany a one-man overload against Japan’s front two in their converted 4-4-2 block, and also created rotations higher up the pitch. Germany’s double pivot of Joshua Kimmich and Ilkay Gündogan linked defence to the fluid attacking midfielders, with Jamal Musiala moving inside from the left and creating room for Raum to overlap. Thomas Müller drifted from his number 10 slot to the right to provide a link between Süle and winger Serge Gnabry. Müller’s movement also created room for Musiala’s movements infield.

Musiala’s individual dribbling between the lines helped Germany break through the Japan block, while the wide combinations between Müller, Kimmich and Gnabry on the right, and Raum, Gündogan and Musiala on the left (below) also helped them access the final third. Japan’s wingers were forced back into deep positions, which gave them a strong defensive base but reduced their own counter-attacking threat, with Germany dominating possession and territory for most of the game. The move that led to Germany opening the scoring from the penalty spot saw Japan’s right winger Junya Ito track Raum’s overlapping run, before moving inside to take Musiala. This left Raum free to receive in behind, from where he won the penalty that Gündogan converted.

Japan changed to a back five at half-time, when Arsenal’s Takehiro Tomiyasu was introduced. They started pressing higher, which meant Germany often built with a back line of four in the second half, with Raum not as high as earlier on in the game (below). Germany’s double pivot were marked by their direct opponents; Japan’s wingers pressed inside, moving on to Germany’s centre-backs, while Manuel Neuer was pressed by Japan’s centre-forward. Whenever Japan jumped out as the ball moved over to Germany’s left, Musiala made a run inside to help play through the press, and Raum delayed his overlapping forward runs. On Germany’s right, however, they went direct more often as Süle struggled to find Gnabry. This led to more turnovers.

As Japan dropped into a back five out of possession, individual battles became even more important, with Germany’s 3-2-5 shape essentially pairing up their attackers with Japan’s defenders (below). Japan came out on top in most of these battles, with only Musiala consistently getting the better of his direct opponent, Hiroki Sakai – he nearly scored after a superb solo run. Gündogan provided penetrative forward runs from midfield, while Müller stayed close to centre-forward Kai Havertz. Japan’s right centre-back had to mark Musiala when he moved inside, with right wing-back Sakai then forced out to Raum. As one of Japan's central midfielders moved wide to try and lock play near the touchline, Gündogan ran forward – like he often does for Manchester City – to give Germany an overload in the centre of the pitch. He hit the post with the score at 1-0, and Gnabry also had two attempts well saved, but Germany couldn’t find a crucial second goal.

Japan started off in a 4-2-3-1 shape, and initially posed a threat after midfield regains with fast counter-attacks that penetrated through the spaces either side of Germany’s in-possession back three. Centre-forward Daizen Maeda and number 10 Daichi Kamada drove forward with the ball and also provided runs off the ball through the centre of the pitch, initially aiming to attack Antonio Rüdiger – who was at the centre of the back three – as early as possible. Wingers Takefuso Kubo and Junya Ito provided support (below), and Japan then worked the ball around Germany's back three, looking to exploit the space that left-back David Raum had left vacant. One of Japan’s double pivot would push forward whenever possible, and they had an early goal ruled out for offside. That served as a warning to Germany as to the threat Japan posed in transition.

Japan struggled to maintain possession in the first half against Germany’s 4-3-3 press. The gap between Japan’s centre-backs and full-backs was too big during their build-up, and they didn’t have midfielders dropping in to connect them. They instead played long balls into the channels and battled for second balls with mixed results. Once Japan gave their centre-backs better passing options, they were able to draw Germany’s structure forward and create more space for runs in behind. Balls from the full-backs, which targeted the wingers’ forward runs (below), gave Japan more of a foothold in the game. This also helped alleviate some of the pressure that had locked them into a deep block for long periods.

Change to a back three

Takehiro Tomiyasu was introduced at half-time as a left-sided centre-back, as Hajime Moriyasu made what turned out to be a crucial switch to a 3-4-3 (below). Ito and Kamada attacked through the inside channels, sometimes providing the team’s width but regularly getting close to centre-forward Maeda in the final third. As Japan grew into the second half, wing-backs Sakai and Yuto Nagatomo – and later Brighton’s more attack-minded Kaoru Mitoma – advanced to support the wide forwards. Ao Tanaka provided delayed forward runs from central midfield as well, as Japan pushed forward in search of a goal.

Japan managed to control possession more after their change to a 3-4-3, and so they were able to push more players forward into attack. Left wing-back Mitoma advanced to provide the attacking width, while Kamada took up a more permanent central position. Tomiyasu pushed forward from left centre-back to create a wide pair (below) as Japan took a bold approach to the game’s later stages. On their right, they had a similar structure, but the wide pair was winger Ito and wing-back Sakai.

These extra numbers in attack gave Japan a platform to break through Germany’s block, and Neuer produced a superb save to deny Ito an equaliser. Takumi Minamino was introduced on 74 minutes for Sakai as Japan piled forward, and Moriyasu was rewarded as his team turned the game on its head with two late goals. Their wide left pair created the equaliser, and a simple long ball was superbly taken down and finished by another substitute in Takuma Asano to put them in front. It was a managerial masterclass from Moriyasu, and Japan fully deserved what was an historic victory.