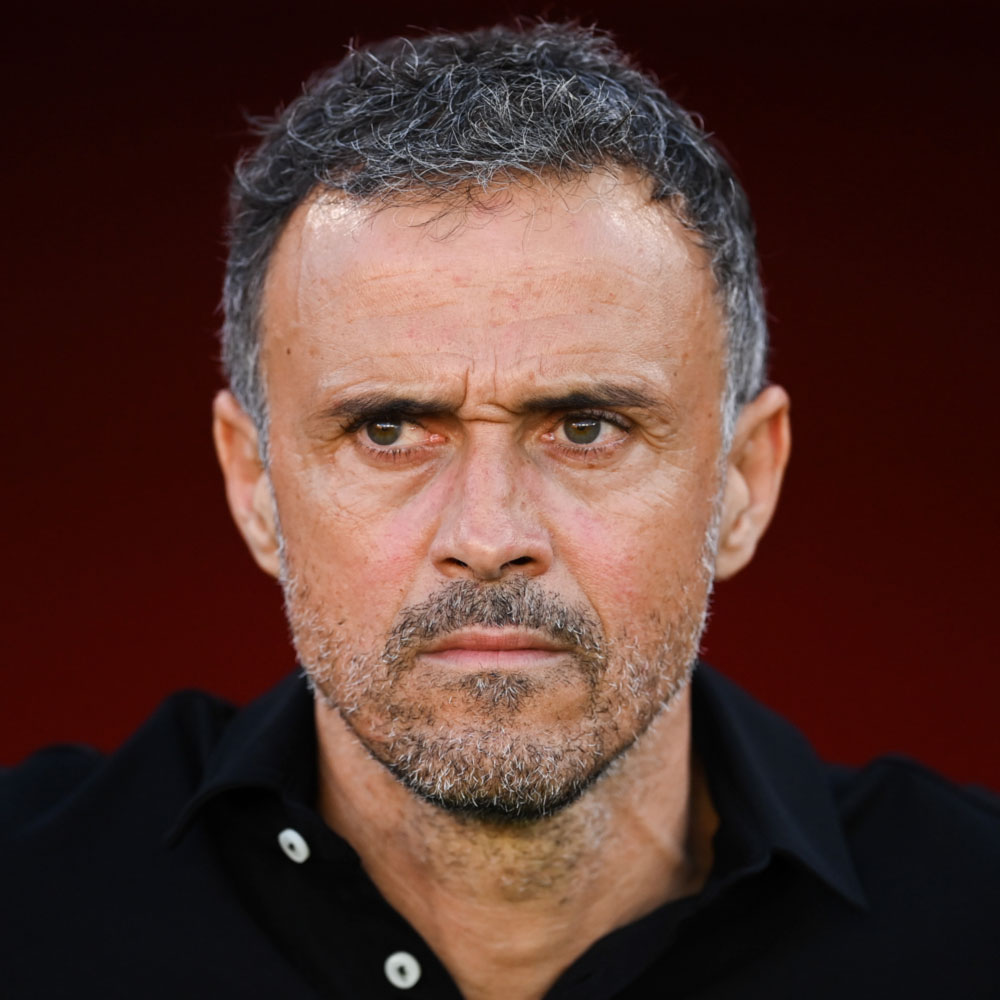 With three hours to go before the match, I’m not interested in anything that is happening on my mobile phone.

I focus on giving the best version of Luis Enrique the coach, and delivering the message that every player needs.

In preparation for that moment, I usually do exercises based on breathing control, which helps me to concentrate. So does the important participation of Joaquín Valdés, our sports psychologist. His role here allows us to know what message we want to give, which in turn will depend on what we need. He will tell us if we need to press the stress button or not.

These are the moments before the last step of a manager’s work: the tactical talk before the match. This is a job I feel we have mastered – I include my coaching staff in that – but which in the beginning made me wonder: “How are we going to be effective with so little time to work with?”

Being an international coach is very nice, but you have one major handicap: you don’t have much time with the players. Only the five FIFA dates through the season. The rest of the time involves a lot of analysis, but without that day-to-day contact with the player. You have to sharpen your wits and use other strategies to reach them.

However, I think there is a feature and a peculiarity in our way of thinking that makes it easier for us to do that: our model of play. Everyone who comes to the national team knows that the only condition we have is to play the same way every game. The strategy does not change, regardless of the opponent, where we play or the result.

If we are winning – for example, comfortably in the first quarter of an hour – why should we retreat? We want to be better for as long as possible.

So far, I think what we are looking for has been evident in our games. We have dominated not only in possession, but also in the number of chances generated.

At Euro 2020, our first finals with the team, we scored the most goals (13, the same as tournament winners Italy, who played one more game). We were among the teams that generated the most chances and conceded the fewest.

If there is a team that one day gets the better of us, and forces us to play in our own penalty area, we will accept it. We will congratulate them and think about the next opponent. But the players know that it won’t change anything we want to do.

We are all aware of how difficult it is to carry this out in a national team. Not only because of the lack of time to work with the players, but also because you train with a group of players who come from different teams, with different ideas of play.

We know it’s complicated, but we don’t try to force it on any player. Instead, we try to induce and convince them. This is a good quality in a coach.

As a player, I had different profiles of coaches. For example, on a tactical level, the one who taught us the most was Louis van Gaal (below), at Barcelona. On the other hand, if you ask me which coach I would have followed to the end of the earth, it would have been Javier Clemente. I would have jumped off a bridge for him if I had to – and with a big smile on my face, because of everything he transmitted to us and the confidence he gave us.

If you manage to convince the player, then you start talking to him about everything else. How are we going to execute our model of play? Where are we going to position ourselves? What kind of spaces do we need to occupy?

We are a coaching staff that spends a lot more time on the offensive side of the game than on the defensive side. Why? It’s about organising 11 players and, depending on where the ball is, changing your positioning to occupy spaces according to what we want to do.

It’s easy to say it on paper, but difficult to explain – and even more difficult to do it on the pitch. That’s why coaches who spend a lot of time on attack say the difficulty lies in the players’ interpretation. The players are the talent, the essential ones, because they are the ones who have to interpret on the pitch what a coach wants.

Often players surprise us. We see them play for their own teams, where maybe they don’t do what we want them to do for us.

“Can he do it?” we often ask ourselves of a player before we see him working with the group. Then, all of a sudden, you get a surprise.

You see how the player shapes up, how he reacts to a specific action in the game, what he does when he loses the ball. Everything we didn’t see before is there.

One example of this is Carlos Soler. I liked Carlos even when we didn’t have him in the squad, but when he came to the national team, we said to ourselves: “Wow! He has everything we need for a number eight and, on top of that, he’s brought us more things.”

"if you want to see how healthy a team is, look at their bench"

For me, being a coach is not about taking the players you think are the best in each position. That would be the easy thing to do, and even more so based on what we are looking for. Our goal is to produce a choreography – a strategy between all of us to find how we are going to play, both in defence and in attack. In short, it’s about making 18 players agree – because those who come on in the second half are vital – in attack and defence, on such a big pitch and with 11 opponents in front of us.

To achieve this kind of harmony, a good atmosphere is key. We always look at the details. For example, if you want to see how healthy a team is, just look at their bench. If you see eight players sitting there sad and not even celebrating their teammates’ goals, then there’s nothing you can do. Forget it! That team is dead.

That doesn’t happen in our national team. It also helps that the motivation is different because of the importance of the tournaments you play. That usually means that the players are more motivated, more prepared and have the right attitude.

There are a series of circumstances here that are different to those at a club. Firstly, the gratitude of the player when he is called up. They usually come with a positive spirit and a clear mentality.

We have a good and calm atmosphere, but we also have to take care of them. I like to be direct with the players, and have few rules. Maybe it’s because of the way I am and the way I communicate, but the only rule is punctuality.

The first thing we try to convey is the feeling that you are in a family. We see each other very few times a year, but it’s all about enjoyment – providing a space where the players feel they always have the opportunity to play.

"there are times when a coach says a lot to the players, maybe to put their own mind at ease"

Sometimes a player who is called up at the last minute because a teammate is injured will start the next game. It can look strange from the outside, but we are openly receptive to what the players tell us. I think this makes it easier for them to have ambition and the desire to play – something that has always given us good results.

All of that is about working with the players in a training camp to get to the final pre-match talk. Once there, we try to give them as little information as possible. There are many times when a coach has a tendency to say a lot of things to the players, maybe to put their own mind at ease. But I’ve overcome that, thanks also to our sports psychologist and the coaching staff.

The information we give the players is what is necessary, what is vital and, above all, what we want to be fulfilled. What good is it if I put forward five ideas on five different aspects of the game, if the player is not going to be able to interpret them?

There is a very good phrase that Rafel Pol, our physical trainer, always says about this: “If I’d had time, I would have written you a shorter letter.”

This is how we reflect on our time with the players. We spend many months thinking about the message we are going to give them, so that they are able to understand it – but also so that they get to the match with the confidence to say: “We know what we are playing for and what I have to do in every situation of the game. And, above all, I’m going to focus on enjoying it.”