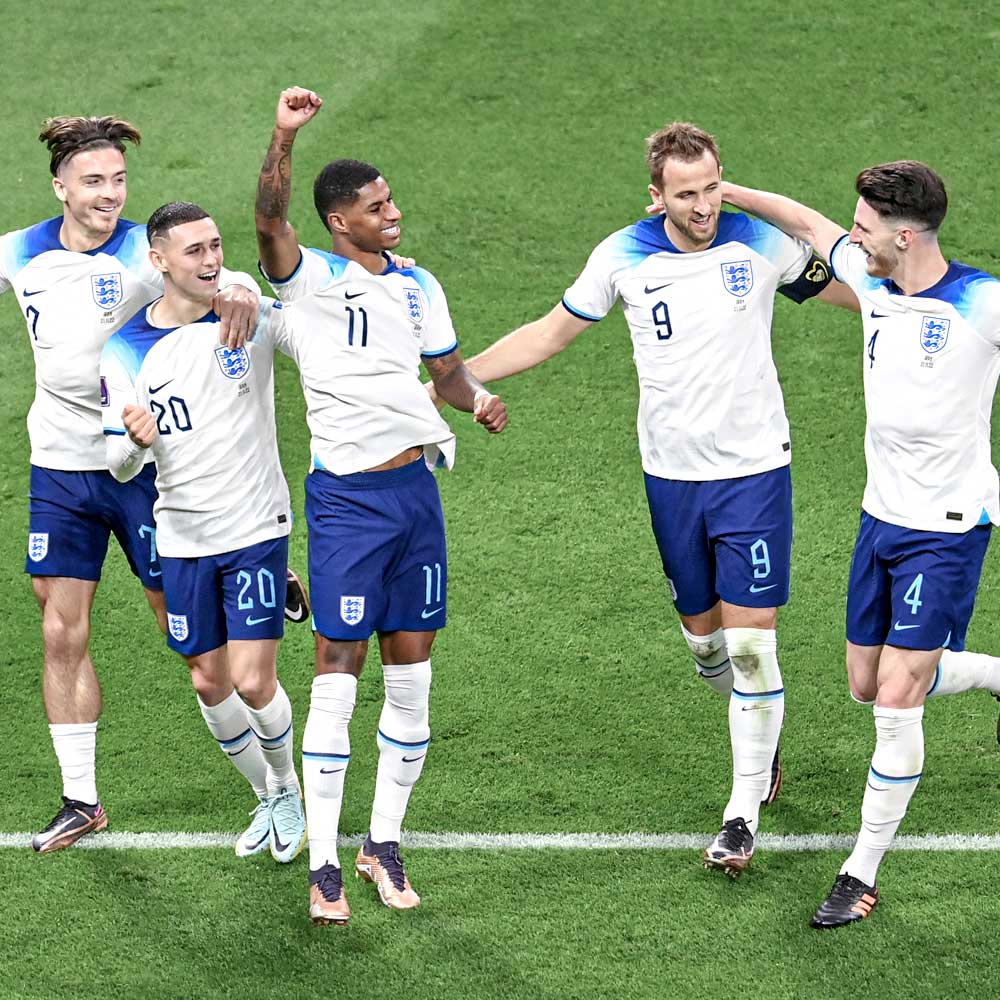 With their 3-0 win over Wales on Tuesday night, England confirmed their place in the World Cup 2022 knockout rounds as Group B winners. Manager Gareth Southgate will be pleased with seven points from the three games. Although the goalless draw against USA left a lot to be desired in attack, few could have hoped for much better than nine goals scored against Iran and Wales, and two clean sheets from three games.

Here, we analyse England's group-stage performances, looking at what they did well, what didn't work quite so well, and what it all means heading into the round-of-16 game against Senegal, and potentially beyond.

With Iran setting up in a low block and not engaging England’s centre-backs until they reached the halfway line, the first 45 minutes of England’s tournament was focused on breaking down a block rather than building from deep. England’s left side – which has always tended to provide the most effective rotations under Southgate – helped break through Iran’s 5-4-1 shape.

Luke Shaw was allowed to overlap into space on the outside and cross, with Raheem Sterling moving inside both with and without the ball (below). He took up positions to receive on the half-turn, before dribbling diagonally towards Iran’s goal.

Mason Mount adapted his position depending on what Shaw and Sterling did. The Chelsea midfielder is flexible enough to drop out wide and support underneath Shaw, or look to receive between the lines as Sterling threatened the space in behind. Mount’s ability to take his first touch forward, even while tightly marked, is an extremely useful attribute. It means England’s deeper midfielders and defenders can break lines with direct, incisive and crisp forward passes into his feet.

In support of these rotations on England’s left, single pivot Declan Rice moved across, with right-back Kieran Trippier moving inside to either form a back three with John Stones and Harry Maguire, or act as a second pivot to help switch the play out to Bukayo Saka on the right. Jude Bellingham then ran forward off the ball, breaking lines with his movement. He added another threat inside the penalty area.

Struggles against an aggressive press

England struggled to create chances against USA, who put pressure on England’s defenders far earlier than Iran. Their attackers jumped out from their 4-4-2 mid-block, and they also did a good job of protecting the central spaces and inside channels to stop England progressing through these areas. Rice was screened for the majority of England’s build-up, though he could have been smarter with his movements to offer new passing lines to centre-backs Harry Maguire and John Stones.

Rice did not allow the game to move around him to create space. The best ball-playing single pivots – players such as Sergio Busquets, Rodri, and Jorginho – will often let play move away from them to help them find space. Instead of following the direction of a pass between Stones and Maguire, Rice could have dropped away from play more often. This might have helped England in their build phase.

This also meant Rice didn’t drop into the back line to form a temporary three with the two centre-backs very often, which would have created a numerical advantage over USA’s two centre-forwards (above). When he did, Stones and Maguire were able to move into wider positions and drive forward into midfield – something they are both very good at. When Rice did drop out of midfield, Mount, Bellingham and centre-forward Harry Kane dropped to receive in more space and help link the back line with the front three.

England were regularly forced to build around the outside of USA’s block, but they struggled to progress effectively as USA’s wide midfielders covered the inside channels well and moved out quickly to press England’s full-backs. The wide combinations, between Shaw and Sterling on the left and Trippier and Saka on the right, did not bring much joy either. The rotations that had worked so well against Iran were ineffective in their second game, as England struggled with USA’s more aggressive out-of-possession approach. England will come up against sides that are willing to press them in the knockout stages. They will have to be more imaginative with how they build.

Although England struggled in possession against USA, their mid-block was consistently compact. This gave them a strong foundation to build from, as has been the case in most of their major tournament games under Southgate. Mount stayed close to Kane, aiming to block passes into the opposition’s pivot players, while Kane jumped out to the centre-backs when he could.

Bellingham and Rice provide energy to press and harry opponents in central midfield. They both showed impressive maturity and intelligence in providing cover whenever the other one moved out of their slot to press. They also have fantastic anticipation to consistently win second balls – or at least compete for them and unsettle the opposition.

Their presence in central midfield has allowed England’s wingers to start wider and stretch the pitch earlier. This gave them more space to attack once they received the ball, but also gave them more licence to jump forward and press the opposition’s full-backs or centre-backs by pressing inwards to block off the pass to the full-back (above). This forced the opposition’s full-backs to drop, meaning England’s wide midfielders could tuck inside to protect the centre of the pitch before then pressing outwards. This helped lock the ball near the touchline and keep the opposition away from goal.

Although the in-possession performance against USA was largely disappointing, England defended impressively for most of the group stage. Southgate admitted he was disappointed by some of his team’s defending against Iran, but the players responded with consecutive clean sheets against USA and Wales. Neither opponent created much in the way of clear-cut chances.

Their varied transitional threat was significant

England showed in their second-half display against Iran how dangerous they are when quickly transitioning forward after a regain with direct forward passes. When opponents leave their defenders man-for-man against their attackers, England have enough quality to hurt most teams. Kane drops to receive, and he creates space further forward for the likes of Saka, Sterling, Jack Grealish, Marcus Rashford and Phil Foden.

England were also a threat on transition against Wales, but from higher starting positions as they counter-pressed more effectively. Bellingham and Rice were joined in central midfield by an elite pressing number eight in Jordan Henderson. The three of them pressed incredibly well, and regularly jumped out of their slot to chase the ball. There were several occasions when one of them was England’s highest player, forcing Wales into direct passes. The other two midfielders were then in position and ready to battle for any second balls in the centre of the pitch.

After a regain like this, England found Kane quickly, who again displayed his ability to spot and then find runners in behind (above). Rashford was brilliant against Wales, providing a consistent threat behind the defence. On the other flank, Phil Foden offered to feet more often, and in doing so helped maintain England’s forward momentum.

This counter-pressing will be particularly useful for England should they go deep in the tournament and face opponents who will look to dominate the ball for longer periods. Transitions and counter-attacks will be a useful weapon.

Southgate largely managed the squad well in England’s group-stage games, rotating heavily and bringing his best players off when games were already won. He also selected certain players to do special jobs against specific opponents.

Against Iran’s low block, for example, the dribbling ability of Saka and Sterling helped break the block and allowed full-backs Trippier and Shaw to advance around the outside. Bellingham was given licence to get forward from central midfield.

Against the USA, he might have made changes earlier and rotated more when it was clear that England were struggling to break their opponents down, but the squad depth was put to good use against Wales. Foden and Rashford gave England a different set of strengths in attack, with Rashford making penetrative forward runs and Foden looking to receive between the lines. Southgate also switched his wingers over at half-time, which meant England had high and wide players to threaten around the outside of Wales’ back three and in behind their wing-backs. For England’s third goal, Rashford was released into this space down the right. He ran through on goal to score.

Kyle Walker was also added to the starting line-up against Wales, and he did well moving inside (above) to help England progress from deep against the 4-4-2 block that Wales tried to replicate after USA’s success. Walker’s positioning helped England’s defenders access the widest player on the right much earlier and progress forward with more conviction. Walker also provided additional defensive cover in transition, plus an extra counter-pressing presence in the central areas. Wales posed little threat on the break as a result.

Overall, Southgate will be delighted with how the group stage played out. England overcame a variety of challenges, and there is good reason to be optimistic heading into the round of 16.