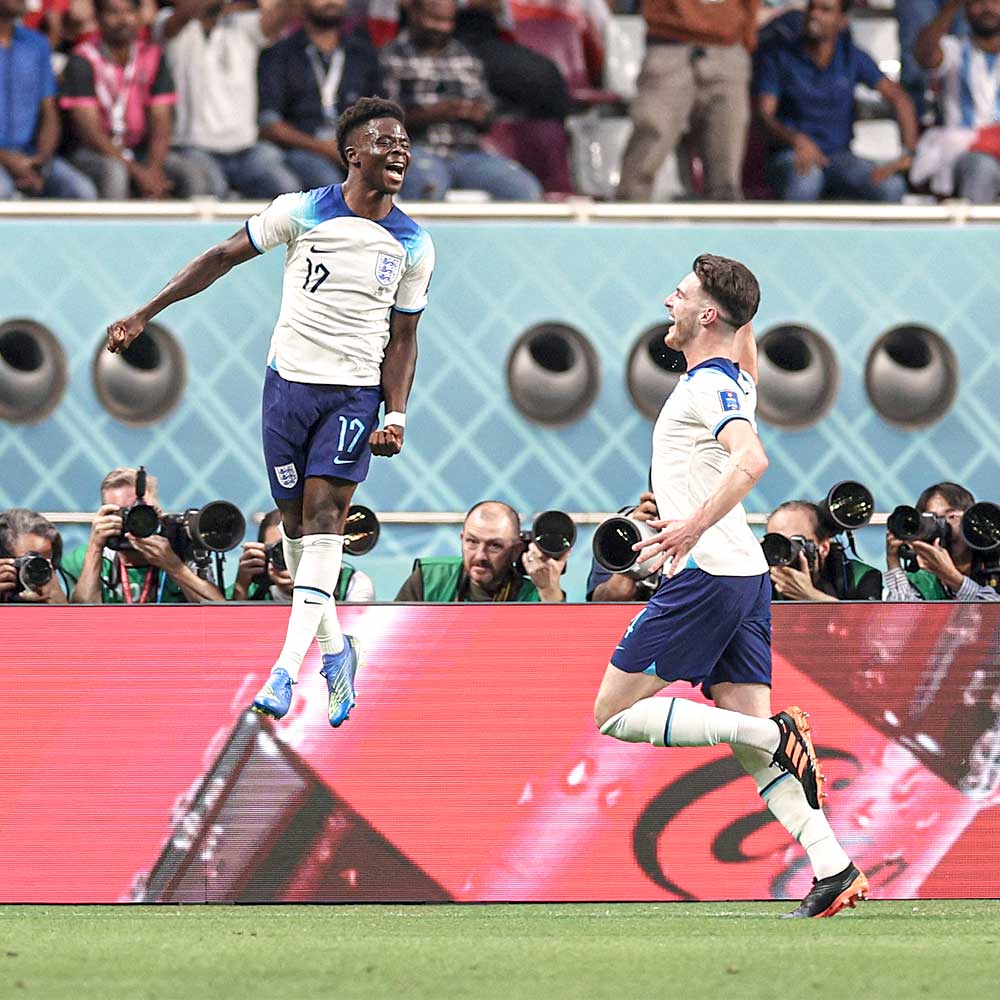 England got their World Cup campaign off to a flying start with the most emphatic of victories, as they hit Iran for six in their Group B opener. The build-up to the match was dominated by talk of whether Harry Kane would wear an armband that had been banned by FIFA, and then by the Iran players' decision not to sing the national anthem in protest against the government in their country. Once the referee's whistle had gone, though, England showed their superiority with their best performance at a major tournament in recent memory. They were better in every department, with Jude Bellingham and Bukayo Saka standing out in particular. The only blemishes on their performance were Iran's two second-half goals, but by that point the game was already won.

England manager Gareth Southgate was pleased, but demanded even more from his players in their remaining group games against USA and Wales.

"It's a great start but we're going to have to be better," he said. "To win by that margin - to play as we did for the majority of the game - we've got to be really happy. That's a great marker to put down. But we shouldn't be conceding two goals at that stage of the match and we'll have to be right on our game against the States. We had, I think, 24 minutes of added time across the game, so it's a long time to focus - but we just lost concentration and, when we play at a slower tempo, we're nowhere near as effective. I'm a miserable so-and-so and I should be more excited, but I've got to keep the team on the right track and we will have to be better."

England used a 4-2-3-1 structure, and got into their stride after a lengthy stoppage due to an injury to Iran goalkeeper Alireza Beiranvand. Bukayo Saka threatened with his individual dribbling off the right, but England’s movements and rotations on their left gave Iran the biggest problems in the first half. Kieran Trippier, John Stones and Harry Maguire formed a temporary back three once Iran were locked deep into their half, with Luke Shaw pushing forward from left-back and rotating with Raheem Sterling and Mason Mount (below). Harry Kane occupied the central defenders while Jude Bellingham pushed forward from deep in midfield, including when he superbly headed England in front from Shaw’s cross.

Declan Rice sat in front of the two centre-backs, allowing both full-backs to push forward simultaneously (below) and help England progress down the flanks. Bellingham moved forward from the double pivot to get into the space between the lines alongside Mount and Sterling, who came inside off the left more than Saka narrowed in from the right. Kane rarely dropped into midfield like he does for Tottenham, but did offer lots of runs around the outside of Iran’s three centre-backs. This provided extra support for England’s wide combinations, with Kane providing a cross from the right for Sterling to score England’s third.

Iran’s 5-4-1 low block prioritised covering the central spaces. Whenever the ball was played back to England’s centre-backs, dropping midfielders or narrowed full-backs, Iran’s wide midfielders Ehsan Hajsafi and Alireza Jahanbakhsh individually jumped out to press (below), with the rest of the midfield unit protecting the central areas. As a result, access into the feet of Kane was restricted in the first half. Iran’s issues came as they failed to deal with England’s wide combinations, as England’s two open-play goals in the first period both game from crosses.

Iran pressed higher in the second period as they had to try and get something from the game, but this left gaps for England to attack through after a regain. This often left Iran with equal numbers against Kane, Sterling and Saka (below), which meant England’s best dribblers were able to take advantage of one-on-one situations. With central spaces appearing, Kane received direct passes and linked with midfield runners more frequently. The England captain's movement and ability to pin his opponent led to substitute Marcus Rashford’s goal and also created space for England’s wingers to exploit, which in turn led to Saka’s second.

England’s central midfielders forged effective relationships with their full-backs – specifically Bellingham with Shaw and Rice with Trippier – as England built around Iran’s front two in the second half. Substitute wingers Jack Grealish and Marcus Rashford then moved inside to get close to number 10 Phil Foden (below). England grabbed a late sixth goal as Grealish finished from Callum Wilson’s cut-back after England sliced through Iran’s press. This again exploited Iran being man-for-man at the back, with fluid rotations and forward runs pulling their defence apart.

Iran set up in a 5-4-1 block, and their rare attacking moments in the first half came when left midfielder Ehsan Hajsafi narrowed inside, allowing one of Ali Karimi or Ahmad Nourollahi to push forward from central midfield (below). Left wing-back Milad Mohammadi then found space to overlap and provide the attacking width on his side. With the majority of these runs coming after a regain from their deep block, Iran struggled to progress beyond the defensive screen provided by Rice and Bellingham in the centre of the pitch. Therefore, Iran only ever really progressed out wide, and struggled to threaten England’s goal as a result.

Iran pressed from a 5-3-2 shape in the second half, which meant that when they did win the ball back, they were higher up the pitch to launch a counter-attack. The game became more transitional, which could have suited Iran, but England posed a stronger threat as they had the quality to take advantage of the space that Iran had left them. This press did put more pressure on England’s build-up, but they coped well.

Centre-forward Mehdi Taremi was extremely isolated in the first half, but once Iran committed to a more aggressive approach without the ball he had more players close to him following a regain. Once Iran progressed into the final third, their wing-backs provided their width, with Sadegh Moharrami continuing to push forward on the right. Central runs from deep took England defenders away from Taremi, allowing the forward to drop away from the centre-backs before he ghosted in behind – as was the case for his superbly taken first goal (below). Taremi’s quality was insufficient, however, to have any impact on the game, as England ran out comfortable winners.