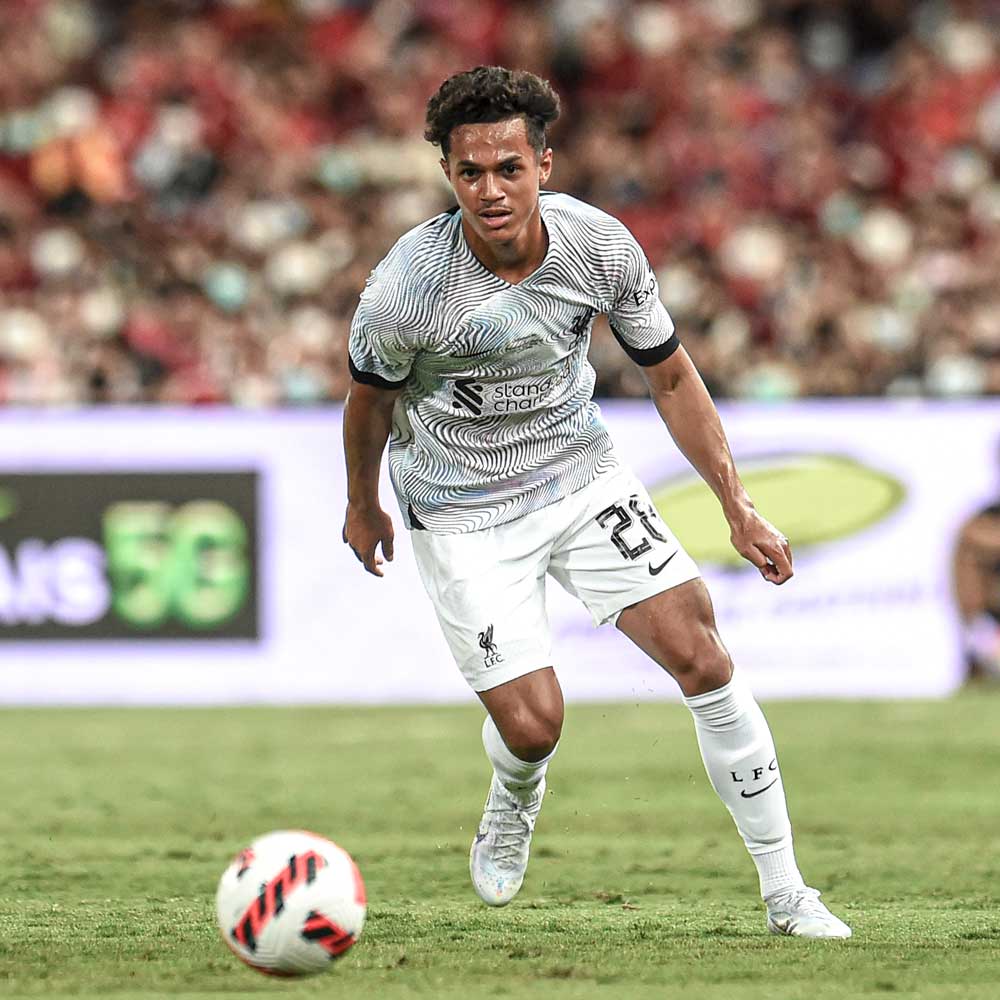 Fábio Carvalho has had an unconventional rise to the top. Having moved from Lisbon to London with his family at the age of 10 in 2013, the youngster swapped Benfica for Balham on the football field, before being signed by Fulham in 2015. Seven years later, after a teenage Carvalho had played a key role in Fulham’s promotion to the Premier League, Liverpool came calling. They snapped up the midfielder in what could prove a remarkably cheap deal at a potential £7.7m.

Liverpool manager Jürgen Klopp will be tasked with transforming Carvalho from a Premier League-quality player into one capable of affecting the race at the top of the table. Klopp is in no doubt about Carvalho’s ability, though, and was clearly delighted the signing could be completed.

“It’s great to be able to welcome Fábio and to introduce him properly to our supporters,” Klopp said. “What a talent he is! A player who can bring a stadium to its feet. He puts his personality into his performances, he is confident and adventurous with the ball, and he wants to make things happen. He is a versatile player for sure, and is very much an attacking threat with his creativity and dynamism.”

Carvalho is a right-footed attacking midfielder whose natural position is as a number 10. He is incredibly technically gifted and capable of playing in tight spaces, where he is happy to receive the ball under pressure and able to hold off challenges from several directions. His first touch is brilliant and he also scans constantly, so he is always aware of what is around him and – crucially – where there is space for him to move the ball into.

He is particularly effective when receiving between the opposition's midfield and defensive lines. Here, he uses his ability to control on the half-turn and then move the ball forwards in one smooth movement (below). Although he does occasionally drop deeper to look for the ball, he generally prefers to stay ahead of the midfield. For Fulham, in a 4-2-3-1 under Marco Silva, Carvalho enjoyed the security of two deeper midfielders behind him. He had the freedom to move around the pitch looking for space and attempting to link with the lone striker.

One of Carvalho’s most valuable traits is that he almost always looks to play forward and progress the ball up the pitch. He isn’t worried about whether he is going to lose the ball with an overambitious move; he wants to move his team forward and increase the chances of a goal being scored. Naturally, this leads to turnovers, but Carvalho has the ability to unlock an opposition defence (below). The risk he brings is worth the potential reward.

Although he is predominantly right-footed, he can control the ball with both feet, which helps him when receiving on the half-turn. His ability to control the ball with the inside or outside of either foot means he is comfortable looking to progress the ball with his first touch almost wherever he is on the pitch. Opponents aren’t able to show him on to his weaker side as he is no less likely to cut back on either foot.

Carvalho shows good technical ability with his passing, though he likes to keep it short and isn’t as effective when playing longer balls. He particularly likes receiving in the half-space on either side of the pitch, turning and deftly knocking the ball through the opposition’s defence for an onrushing teammate (below). Although he has the vision to spot these runs, his execution can let him down with passes overhit or made at slightly the wrong angle. If he improves his efficiency in these situations, he can take his game to the next level.

He gets into goalscoring positions with clever, delayed runs from deep to move beyond the opposition’s back line. Indeed, most of his goals come as a result of good movement into the penalty area. He is composed and confident when he gets into a position to shoot, and tends to use his instep to finish with accuracy. When using power, his right foot is stronger than his left. When he scores with his left, he has to be smarter with how he shoots.

He shows intelligence when pressing, too, and clearly follows the instructions of his manager closely. Following a loss of possession, he counter-presses with intensity; his work rate in the final third has led to some good chances for his team. When he attempts a tackle, he waits for the right moment to put a foot in as he cannot rely on his upper-body strength. He isn’t particularly aggressive or firm in making tackles, but his pressing ability will certainly have appealed to his new manager at Liverpool.

Carvalho’s preferred position is the number 10 position, where he can enjoy licence to move around the final third looking for space. He is always searching for ways to connect midfield to the striker, and is at his best when the team’s priority is finding him in the half-spaces as well as the central space around the edge of the penalty area. This is sometimes referred to in coaching circles as Zone 14, as shown in the below diagram.

His confidence, composure and tactical intelligence mean he is a constant threat to the opposition’s centre-backs. Likewise, his movement off the shoulders of defensive midfielders means they have to take their eyes off the ball to keep tabs on him. It is in those moments that Carvalho will look to advantage.

Potential as an eight

For such a young player, Carvalho has all the attributes of a classic number 10. It will therefore be interesting to see how he adapts to a team like Liverpool, who play in a 4-3-3. Carvalho has the work rate and attitude to adapt to the demands of any manager, but at just 170cm he lacks the physicality of many modern central midfielders. There may be some who doubt whether he can play in such a position for such a big team at such a young age.

However, his technical ability, confidence and understanding of the game will mean there is potential for him to succeed at any level. He will back himself to make it at Liverpool and, under the guidance of Klopp, there’s no reason to doubt Carvalho's chances of succeeding as an eight.