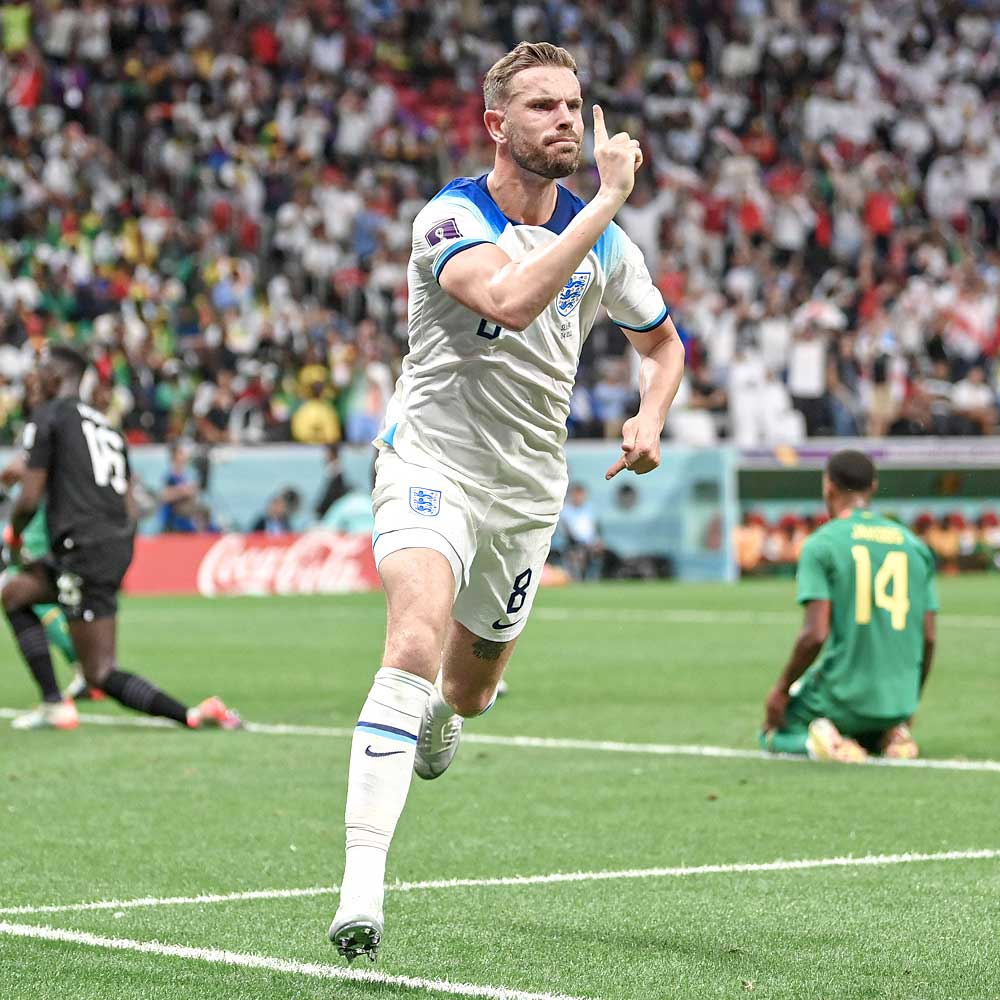 England stormed into the quarter finals at a third successive major tournament for the first time in their history as goals from Jordan Henderson, Harry Kane and Bukayo Saka saw off African champions Senegal. Gareth Southgate will be delighted with the final scoreline, but there are still improvements for his side to make, with Senegal's press causing plenty of problems early on in this tie. Senegal could not find a breakthrough, though, and England punished them ruthlessly. Henderson burst through midfield to finish from the hugely impressive Jude Bellingham's cross – England's first good move of the game – before Kane made it two on the stroke of half-time. Saka buried any chance of a late Senegal comeback as he dinked in a third from Phil Foden's pass to set up a meeting with reigning world champions France. Stopping Kylian Mbappé and co will represent a significantly bigger challenge than any other England have faced at this tournament.

“This is the acid test for us,” Southgate said of England's next game. “We know it’s a step up from everything we’ve had so far. But the team have garnered so much experience in the last few years. They’re playing with confidence. We look threatening, we’re scoring goals, another clean sheet, which was really pleasing to see. So, we’re in a good place, but we know the level of the opposition as well.”

Converting to a back three

England operated in a 4-3-3 formation, but converted into a back three when they established periods of possession. Luke Shaw pushed forward from left-back to leave three at the back, with England looking to overload Senegal down the left as Jude Bellingham joined Phil Foden and Shaw out wide (below). Harry Kane initially remained central, while Jordan Henderson pushed forward through the right inside channel. Early on, England’s centre-backs struggled to find midfielders in central areas; they only ever really progressed up the pitch when they slowed play down on their right, before switching play quickly to the left. Foden, Bellingham and Shaw then had the chance to hurt Senegal.

England’s first two goals came largely against the run of play. Foden proved England’s best player at receiving under pressure, but even he struggled to keep hold of the ball when England broke, as Senegal did a brilliant job of limiting their opponents’ progress with an aggressive man-marking system. For England’s opening goal, Kane moved wide to pull Senegal’s centre-backs out of shape. After Foden found him, he unleashed Bellingham, who had made a strong run from deep – something he did impressively throughout the game (below). Bellingham progressed all the way into the Senegal area and crossed for Henderson to finish, in a display of the incredible energy England’s number eights provided all night. Bellingham also influenced the game heavily by making a vast number of regains in the first half. Just before half-time, he won a second ball on the edge of the England box and set in motion the counter-attack from which Foden slipped Kane in to double his side's lead.

Kane’s link play on the left

Senegal’s block changed in the second half after manager Aliou Cissé introduced more attacking players in pressing roles. This crowded the centre of the pitch but also meant more space was available for England to play around Senegal’s shape. Kane made diagonal movements away from the Senegal centre-backs to receive from full-backs Shaw or Kyle Walker, and he consistently then found Foden or Saka making runs beyond the opposition. He was particularly effective when receiving from Shaw, taking advantage of the increase in space on this side, and a pattern down that flank led to England's third goal (below). Bellingham continued to make box-to-box runs, with Henderson and Declan Rice more reserved in midfield as England made sure to hold on to their commanding lead.

Rice and Henderson – later replaced by Kalvin Phillips – formed a double pivot as the game wore on. They each joined an England full-back to help the side progress around the Senegal block, with the other of the midfield two positioned centrally, ready to cover against any transitions (below). England’s full-backs were also more reserved, leaving more space for replacement wide players Jack Grealish and Marcus Rashford to isolate their opponent one on one. Mason Mount brought energy between the lines as a fixed number 10, allowing Kane to stay higher. This enabled him to pin Senegal’s central defenders, and also rest his legs in the final 15 minutes.

Senegal were set up a 4-2-3-1 shape, and early on they looked the better team on the ball, with both full-backs advancing to provide width in attack. Left-back Ismail Jakobs provided support around Ismaïla Sarr, who looked really threatening as he attacked Kyle Walker in what was a key battle in the first half. Right-sided midfielder Krépin Diatta narrowed to allow right-back Youssouf Sabaly space to advance, as Senegal created an aggressive front line of five. The double pivot of Nampalys Mendy and Pathé Ciss held their positions to create a box underneath the ball with the centre-backs (below). Centre-forward Boulaye Dia was joined by number 10 Iliman Ndiaye, who rotated well with Sarr as Senegal posed England real problems in the first period, particularly down their left.

Senegal caused and then pounced on England errors in the first half, and posed a real threat with quick and incisive transitions. As England had converted into a back three on the ball, Senegal had more space to drive forward when they won it, with Ndiaye constantly looking for Dia, who made instinctive runs off the shoulder of England’s last man. However, even when England had sufficient numbers back after losing the ball, Senegal’s narrow front line still made inroads, and they forced Jordan Pickford into some key saves when the game was still goalless. Sarr was influential through the left inside channel, and Dia was a persistent threat in behind (below). Senegal failed to take advantage of any of their high turnovers, though, and they were punished as England instead hit them on the transition. The fact that England scored and Senegal did not was essentially an indication of the gulf in quality between the teams’ attackers.

Cissé made three changes at the break, as Senegal made an attempt to get back into the game. Dia moved to the right flank but came inside very early to support Bamba Dieng, who came on up front. This gave Senegal a front line of two ahead of a central-midfield three instead of a double pivot, with Tottenham’s Pape Matar Sarr introduced. The width on the left was still provided by Ismaïla Sarr, but with the right winger narrowing so early, right-back Sabaly had lots of space to attack into, forcing Foden to work back much deeper than before (below). This added little to the Senegalese attack, though, and actually allowed England to build out from the back and transition more fluently down the Senegal right. It was a transition down this flank that led to their third goal, and wrapped up a win that takes England into the World Cup quarter finals.