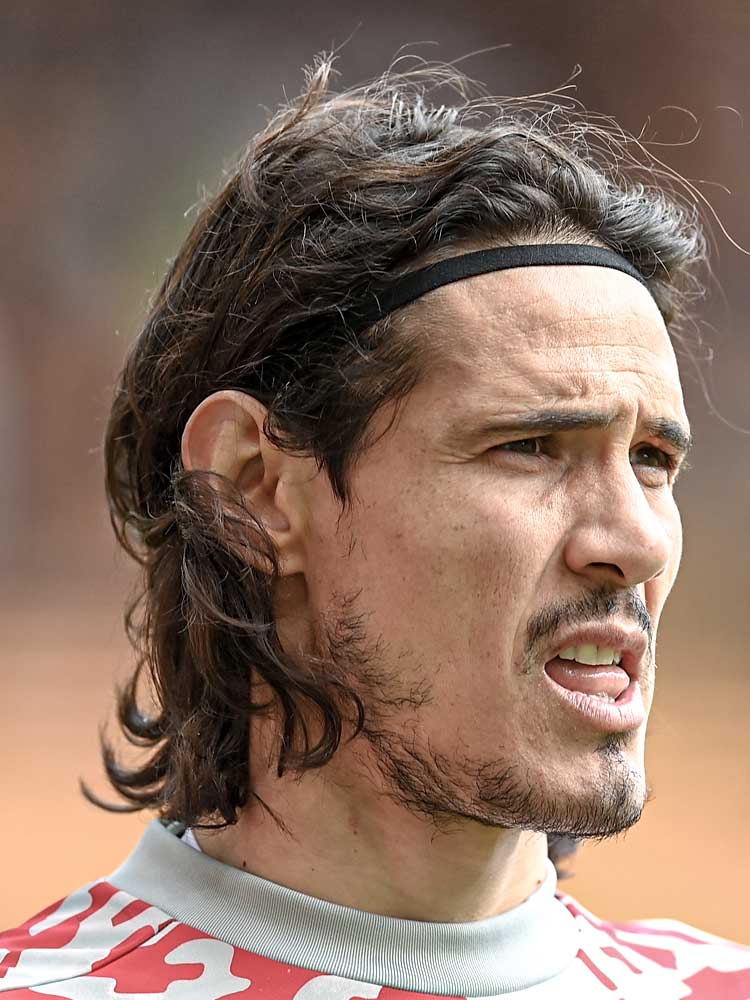 Profile
In swapping Paris for Manchester, Edinson Cavani went from competing for selection with Kylian Mbappé, Neymar and Mauro Icardi to challenging Cristiano Ronaldo, Anthony Martial, Jadon Sancho, Mason Greenwood and Marcus Rashford. Among the most prolific and consistent goalscorers of the past decade, in the summer of 2020, Cavani had finally made the move to the Premier League that had been considered possible for a significant portion of his career.

Arriving at Old Trafford at the age of 33, Cavani may have been past his peak, but he remains the type of natural striker Manchester United have lacked since Romelu Lukaku left for Inter Milan a year earlier. Potent and fluid though Greenwood, Martial and Rashford may consistently be, there had been occasions when United would have benefitted from a physically stronger striker capable of holding the ball up in the final third. They again have that in Cavani. “He has been a great influence and had a great impact,” said United’s manager Ole Gunnar Solskjaer. "He is improving everyone (around him) as well, but he still has a few years left in him. He is a meticulous profesional. His habits and everything he does shows you about why he has had the career he has had. He is still one of the fittest players we have got.”

Tactical analysis
Cavani operates similarly to a traditional number nine, occupying the spaces close to the opposition’s central defenders, and he thrives in an advanced central position. During his time with PSG, 93 per cent of his league goals were scored from inside the width of the six-yard box – the ability to find space to attack balls in those areas represents one of his major strengths.

He moves with intelligence, and his ability to understand and adapt to his surroundings, and therefore instinctively detect the best positions to move into, is one of his most impressive traits. When possession is being built in defence, Cavani will start in an offside position to gain an advantage over his likely markers, meaning him regularly being well placed to reach the ball ahead of his marker once a teammate has penetrated the opposition in a wider position because of a head start on his opponents (below).

He often looks to make runs in behind opponents and is skilled at timing a curved run to get back into an onside position before sprinting towards goal. In the latter years of his career, however, he has lost some of the pace that made him so effective in Napoli’s wonderful counter-attacking team under Walter Mazzarri in the early part of the 2010s, and as a result he is less of a threat in behind.

He remains a consistently superb finisher though, and he also uses his six-foot frame to impose himself against physical defenders and provide an aerial threat. He is adept at using his body to help secure possession against an opponent before rolling them and working an opportunity to shoot at goal.

He favours shooting with power, using his laces rather than his instep, and requires minimal back lift to generate power in his shots. He also uses his momentum when sprinting to gather more pace on his shots; he is very skilled at keeping his shots under control while sprinting.

Role at Manchester United
Among a group of young, energetic, fast forwards in Martial, Rashford, Greenwood and Sancho, Cavani offers something different. Despite Lukaku’s departure in August 2019, goals were rarely lacking at United. Solskjaer’s team has sometimes appeared too one-dimensional, however, with Martial – not a traditional centre-forward – chosen most frequently to lead the line and counter-attacks proving the most common route to goal. When teams sat back against them and they needed more presence in the centre-forward's position, United struggled.

Cavani was once a real threat carrying a counter-attack forwards, but he has been content to adapt at United for the benefit of others and to play with his back to goal more than he did at previous clubs. His arrival has allowed Martial to start as a wide forward – perhaps his best position – and it is the Frenchman and Rashford who provide runs in behind once Cavani has secured possession. Without Cavani, there have been times when United have struggled to get both Martial and Rashford, their two quickest forwards, running in behind. Cavani has created more opportunities for that to happen (above).

Cavani can hold play up more effectively than any other United teammate, and he is also better than any of them with his back to goal. He impresses at retaining possession when under pressure from a defender, and he is willing to come deep to draw a defender out of position and create space for Rashford and Martial to break into. After moving to link play, often by setting the ball to a forward-facing midfield teammate, Cavani will then turn and sprint to catch up with play. He still has some of the pace that made him such a threat on the break at Napoli, and he will do everything he can to ensure that there is a presence in the penalty area to attack any crosses (below).

He provides a greater aerial threat than United's other attacking options, and makes clever runs across defenders to reach the end of balls into the penalty area. As his aforementioned record at PSG shows, he is brilliant at working himself a chance close to goal, and he also rarely wastes a good opportunity to score.

There were doubts as to how much worth there was in United signing a player who had hinted that retirement was a possibility when PSG decided to let his contract run down. Cavani has instead shown he has plenty yet to offer, and in doing so he has proved Solskjaer right for bringing him to Old Trafford.