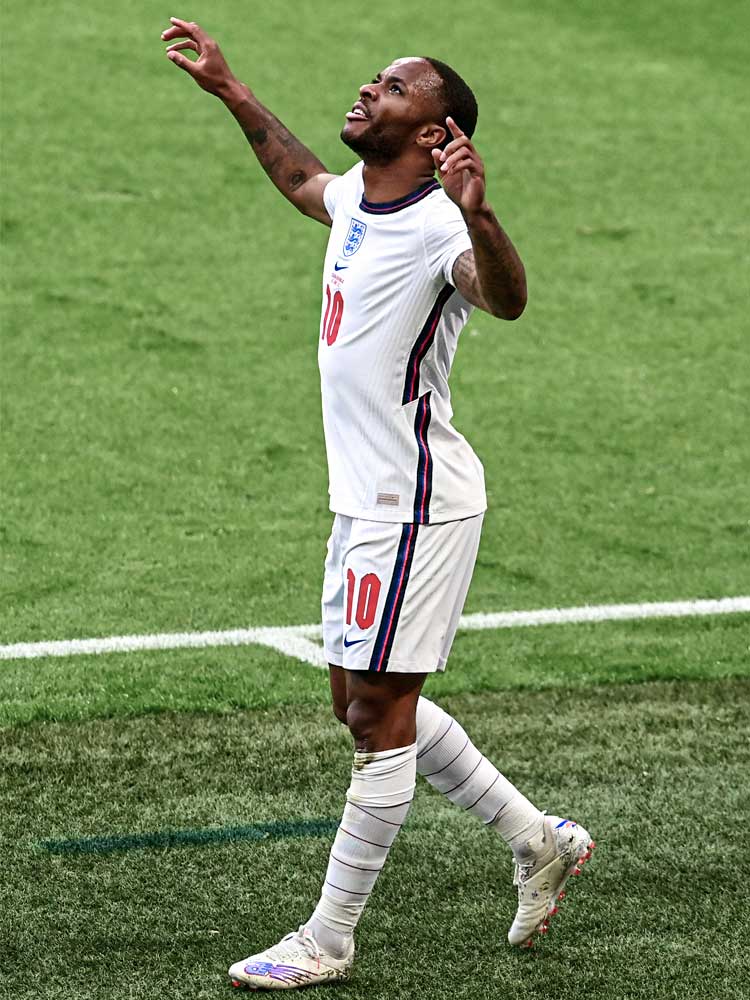 Raheem Sterling scored his and England's second goal of Euro 2020 to ensure they head into the knockout stages as winners of Group D. Shorn of Mason Mount and Ben Chilwell by Covid proticols, Jack Grealish, Bukayo Saka and Harry Maguire were handed their first starts of the competition, and Gareth Southgate was rewarded with an improved performance. Sterling had already struck the post when Grealing crossed for him to head them in front, and Saka also impressed. "I enjoyed a lot of our build-up play," said Southgate, whose team has three clean sheets from three. "In the first half in particular, the interchange of positions of our forwards was very effective. What they're showing is adaptability and resilience. We've had to make so many changes and known that players right from the start weren't available." His opposite number, Jaroslav Silhavy, said: "Our performance wasn't bad, but we played against England. The teams we are going to start facing are going to be similar in that regard."

Jaroslav Silhavy set Czech Republic up into a 4-2-3-1 formation led by Patrick Schick. Their opponents, England, defended with that same shape.

Czech Republic regularly sought to build possession, and circulated the ball across their defensive line as they attempted to progress forwards. During the first half their players would execute a forward pass and then follow it with an off-the-ball forward run, to ensure that their passages of play would continuously have forward options and that they would force England to track their runs – which in itself was made more difficult by some of those runs being made on their blindside.

There were occasions when the direction of pass was used to attract the attention of opponent towards the ball before a run was made on that opponent's blindside, potentially delaying their attempts to track that run. The ability of England's defenders to communicate with those in front of them was essential, because their positioning made them the most capable of detecting those runs and alerting their teammates.

Silhavy's team often succeeded in progressing possession through both the defensive and midfield thirds, but they too regularly struggled to beat England's defence. Their wide forwards moved infield into the half-spaces and their full-backs advanced, so they offered width across the pitch, and they complemented doing so by keeping players behind the ball and Tomas Soucek making forward runs into the area to attack crosses.

England, where possible, also sought to press their opponents, and showed greater dynamism than they previously did against Scotland. Harry Kane led that press, and was supported by either Raheem Sterling or Jack Grealish in taking their opposing central defenders and the relevant defensive midfielder, and if they were pressing with increased aggression, Kalvin Phillips or Declan Rice advanced to take the defensive midfielder and Kane and Grealish or Sterling focused only on their opposing central defenders. To that end, one wide attacker remained in a position to pressure his opposing full-back, and the other tucked infield to take the other defensive midfielder.

Czech Republic were less attack-minded during the second half, despite being a goal down. They offered a limited threat to the space in behind England's defence; several players moved to towards the ball but did so as individuals instead of offering contrasting movements or rotations with those alongside them, making it easier for England to remain organised. The forward passes they offered were also mostly into feet, and then returned in the opposite direction.

England were organised by their manager Gareth Southgate into a 4-2-3-1 formation built on the double pivot formed by Kalvin Phillips and Declan Rice. Their opponents, Czech Republic, defended with the same shape.

They demonstrated an increased desire to play forward passes, and during the first half were rewarded with an improved display. Phillips and Rice offered more variety in their positioning; the former often moved to between John Stones and Kyle Walker to operate as a false full-back and free up Walker to advance, and Rice regularly operated as a false central defender to extend the width of England's defensive line, giving both Walker and Luke Shaw increased freedom. Rice's positioning also contributed to the creation of an overload when Vladimír Darida advanced to join Patrick Schick.

England also offered movements back towards the ball and runs into the space behind their opponents' defence, both of which had been largely absent when they drew with Scotland, increasing the spaces England could attack and creating others they could penetrate into. The combination of Jack Grealish, Raheem Sterling, Bukayo Saka and Harry Kane ahead of Rice and Phillips also led to fluidity and an element of unpredictability that tested their opponents' concentration.

By them moving to towards the ball, Saka, Grealish and Sterling were able to receive, turn, run at their opponents and potentially attack one-on-one, when they are often at their best. Saka receiving the ball in England's half led to them scoring the game's only goal. When possession reached the final third, Southgate's team also offered increased numbers when attacking crosses or creating potential combinations.

Perhaps uncharacteristically, it was at corners, free-kicks and throw-ins that England disappointed. Their deliveries were short of the quality expected, and those offering attacking runs didn't do enough to get free of defensive attention. Their throw-ins were regularly bounced short of a player's position, making them more difficult for that player to control and encouraging Czech Republic to use them as a pressing trigger, and too many players were close to the throw-in taker, reducing England's space to play in to the benefit of their opponents. From numerous throw-ins England lost possession.

Czech Republic defended more effectively when an attacking midfielder took whichever of Rice or Phillips was deepest when pressing England's defensive line alongside either Schick and and a wide forward, or simply with Schick. When Rice or Phillips were instead freed up by a central defender instead being prioritised, England successfully accessed them; there were several occasions when Phillips received, turned, and sought to play forwards. When a defensive midfielder instead took him, one of England's attacking midfielders had the freedom to move into dangerous territory and receive. When they adjusted to focus on occupying Phillips, Stones and Harry Maguire had increased space to advance with the ball after switching possession between themselves to progress away from Schick.

Both central defenders advancing with the ball at their feet was a further positive because of the extent to which them doing so committed opponents and therefore freed up their teammates. There was regardless a reduction in the tempo and quality of England's attacks during the second half. They offered fewer runs in behind, and consequently created fewer chances, even if they effectively managed play with their possession, and appeared comfortable.