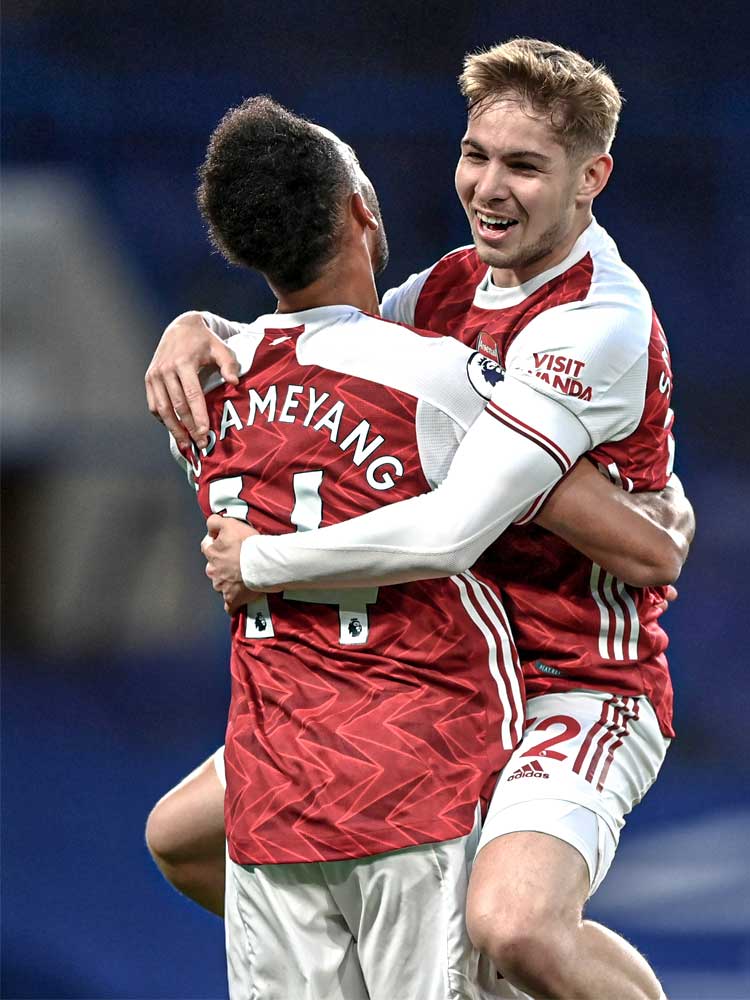 Arsenal took advantage of the seven changes made to Chelsea's starting XI to record a victory that could yet lead to their 2020/21 finishing on a high. Eliminated from the Europa League at the semi-final stage by their former manager Unai Emery's Villarreal, they continue to strive to finish above their rivals Tottenham in the Premier League, and sit one point and one place behind them in eighth. It was the promising Emile Smith Rowe who gave them the lead during the first half, after a mistake by Jorginho. Chelsea next face Leicester in the FA Cup final, and their manager Thomas Tuchel said: "I'm not happy with what I saw, I have my responsibility because I picked the line-up, but the performance was the performance." His opposite number Mikel Arteta said: "I am really happy with a lot of things we have done, right from the first minute, the attitude and the desire to win that we showed."

Chelsea were organised by their manager Thomas Tuchel into a 3-4-2-1 formation led by Kai Havertz. Their visitors, Arsenal, defended with a 5-4-1, via Kieran Tierney and Bukayo Saka withdrawing into defence to form their back five.

Arsenal initially applied an aggressive press against Chelsea's attempts to build from the back. Pierre-Emerick Aubameyang pressed Thiago Silva to force play to one side of the pitch, the wide midfielder on that side remained poised to press his opposing central defender, and the other wide midfielder tucked in to join Thomas Partey or Mohamed Elneny in taking a midfielder so that the spare teammate could remain in a deeper position. With their wing-backs also taking their opposite numbers, Chelsea struggled to adjust; it was Jorginho being forced into playing a backwards pass to Kepa Arrizabalaga that led to Emile Smith Rowe scoring the game's only goal. His pass was careless, and worsened by him standing and watching it travel.

There were occasions when, despite Arsenal's press, Chelsea succeeded in finding the feet of Mason Mount and Christian Pulisic as they withdrew into the half-spaces, but with Arsenal's defenders content to follow them, Chelsea struggled to support around them and possession regularly returned to their defensive third. Arsenal also adopted a deeper defensive structure once they had a lead to defend; they sought to restrict spaces in behind and between the lines, leaving Chelsea with little choice but to attempt to play passes over their defence, where the limited space meant that the timing and execution of both the run and pass needed to be near-perfect if they were to succeed. The reality is that that was never the case.

Tuchel's team posed a greater threat via switches of play from one wider central defender to the other, and via changes of tempo in the attacking half. The former was intended to capitalise on the occasions Arsenal offered increased numbers towards one side of the pitch. The latter unfolded around Arsenal's midfield, and involved rotations between the relevant wing-back, attacking midfielder and Havertz, and short, diagonal passes to draw opponents out of their positions.

Mount was given a deeper role, and at half-time Callum Hudson-Odoi was introduced, but sttill Chelsea struggled to create goalscoring chances. Further attempts involved moving possession wide and delivering crosses into the penalty area, but the target of those crosses was regularly outnumbered.

Mikel Arteta chose to mirror Chelsea's favoured formation by also using a 3-4-2-1, led by Pierre-Emerick Aubameyang. Their hosts defended with a 5-4-1, via Reece James and Ben Chilwell withdrawing from midfield and into defence, and Mason Mount and Christian Pulisic into midfield.

Mount and Pulisic regardless pushed up to alongside Kai Havertz to press Arsenal's three central defenders in advanced territory, Jorginho and Billy Gilmour took Mohamed Elneny and Thomas Partey, and Chelsea's wing-backs moved to take their opposite numbers. With Chelsea's central defenders happy to follow Emile Smith Rowe and Martin Odegaard when they withdrew deeper into midfield, a near-man-oriented approach was in place.

Arsenal detected potential in what unfolded around Odegaard and Smith Rowe; with Kurt Zouma and César Azpilicueta moving with them, Bukayo Saka and Kieran Tierney made diagonal runs into the spaces they vacated, and Arsenal target playing to them. A further approach involved Aubameyang drifting to the right to occupy Zouma, and Saka remaining advanced to draw Chilwell, presenting Odegaard with the freedom to move into half-spaces and receive outside of Gilmour and Jorginho, and therefore to turn and advance.

After Smith Rowe's goal Arsenal's priority became defending their lead, so the attacking potential they offered came on the counter. Chelsea became stretched as they sought an equalising goal, so Arsenal – and particularly Aubameyang – targeted  the spaces that existed. Greater creativity could have led to them increasing their lead via the transitional opportunities that existed.