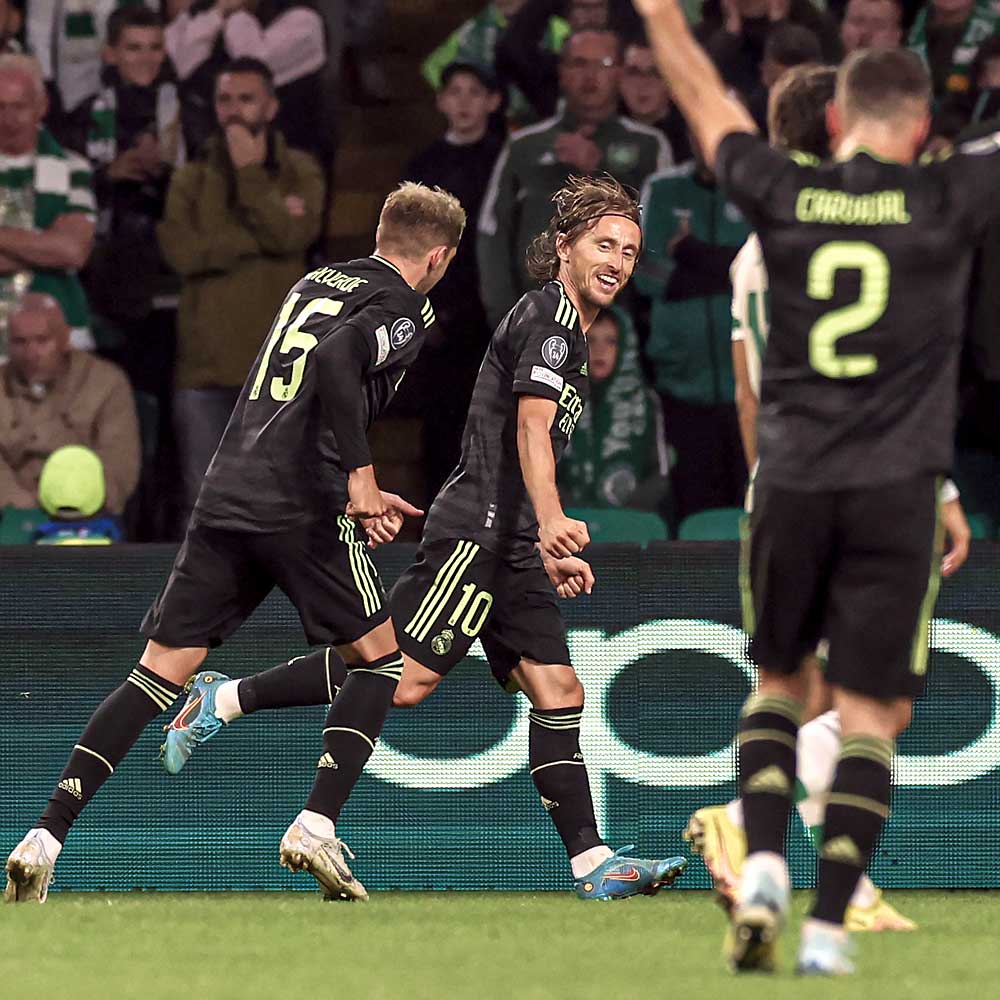 Reigning European champions Real Madrid started their 2022/23 title defence with what eventually became a resounding win at a bouncing Celtic Park. Ange Postecoglou's home side gave a great account of themselves, and created some fantastic chances despite being huge underdogs. They might even have taken a shock lead when Callum McGregor had Thibaut Courtois beaten in the Real goal in the first half, but his effort came off the inside of the post. Real grew into the game after the break, though, with goals from Vinícius Júnior, Luka Modric and Eden Hazard silencing the home crowd – albeit only temporarily – to wrap up the three points.

"Obviously we're disappointed with the outcome," Postecoglou said afterwards. "I thought the first goal was always going to be important, and up until that point we were well in the game. If anything, we had the better chances. You need to capitalise on them, but we didn't."

Celtic used a 4-3-3 structure, with their two number eights, Reo Hatate and Matt O’Riley, in very high positions to support centre-forward Giorgos Giakoumakis (below). Jota held the width on the left side and left-back Greg Taylor inverted, which created more room for Jota to dribble but also allowed Hatate to remain high. Liel Abada was happy to come in off the right flank as Celtic looked to penetrate through Real Madrid’s central midfield with incisive forward passing, before looking to find their number eights between the lines. Celtic’s first big chance came when Callum McGregor powered a strike on to the post from Giakoumakis’ lay-off, with the hosts starting very quickly and managing to penetrate Madrid in central areas.

Celtic’s deeper build-up was impressive in the first half, and they adapted depending on how Madrid pressed from their mid-block. Initially, one of the visitors' central midfielders jumped to support a press, as they adapted into a 4-4-2 shape. However, Celtic responded by making the most of their central-midfield overload, and Taylor often moved inside to add another player in central midfield. Then, when a Real winger jumped out to press, Celtic looked to find the full-back on that side to launch a quick break forward (below).

As Real found their feet and started to dominate possession more, Celtic struggled to get forward as frequently. And, when they did get into attacking positions, they lacked cutting edge. They struggled for quality in one-on-one situations, and this led to them creating few chances in the second period. Daizen Maeda was introduced at half-time; he provided a threat in behind on transition and also combined well with Celtic’s number eights, especially through the right inside channel (below). He also had Celtic’s best chance of the game early in the second half, but mistimed his effort from close range. Ultimately, it was individual quality in the big moments that separated the two sides.

Real Madrid were set up by Carlo Ancelotti in their usual 4-3-3 shape, with Toni Kroos dropping out of midfield into a deeper position on the left side during sustained spells of possession. Luka Modric widened on the right, and right-back Dani Carvajal pushed high very early, getting close to Federico Valverde (below). Much of Madrid’s attacking play in the first half came down their right. With Kroos dropping so deep, Ferland Mendy pushed forward from left-back, but he started off slightly reserved to guard against Celtic’s counter-attack down Real’s left. Aurélien Tchouaméni played as the single pivot; he did a good job of covering underneath Carvajal on the Real right when Celtic countered down their left.

Height from the wide pairs

As Madrid grew into the game, Celtic used a low block for longer periods, and the visitors’ attacking height came through their wide pairings. Kroos and Modric then dominated the inside channels and central spaces, and after Eden Hazard was brought on as a replacement for the injured Karim Benzema, he dropped away from Celtic’s centre-backs to link the central midfielders to the wide players. Despite now being in control of the ball, Real lacked a central penetrative threat beyond the hosts’ centre-backs. A lack of a natural centre-forward was a consistent problem, because Real regularly progressed down the flanks – through their high, wide pairs – but then had too little presence in the box to target with crosses and cut-backs.

After the break, Hazard focused more on running beyond Celtic’s back line, resulting in far more threatening attacking play from Real. Three-player combinations of full-back, winger and ball-side number eight patiently worked the ball around Celtic’s block, before looking for the penetrative movements of Hazard in behind (below). On the right, Real rotated effectively – Carvajal was often positioned as the highest attacker – and it was play down this flank that led to the opening goal. Real played out from the back to beat Celtic’s press superbly, before Modric looked for Hazard and Valverde down the wing. Valverde then crossed for Vinicius to score at the far post.

After two quickfire goals, Kroos and Modric took control of the match, often dropping as a pair to form a temporary double pivot. This helped deal with any of Celtic’s attempts to press high, and locked the visitors into a lower block. Eduardo Camavinga was introduced; he moved wide regularly to support underneath the wingers, creating more space for Hazard to drop through the inside channels. Carvajal continued to rotate with Valverde on Madrid’s right, while Vinícius provided penetrative runs from his wider starting position. Real added a third goal after a fantastic team move to wrap up what had become a convincing win.