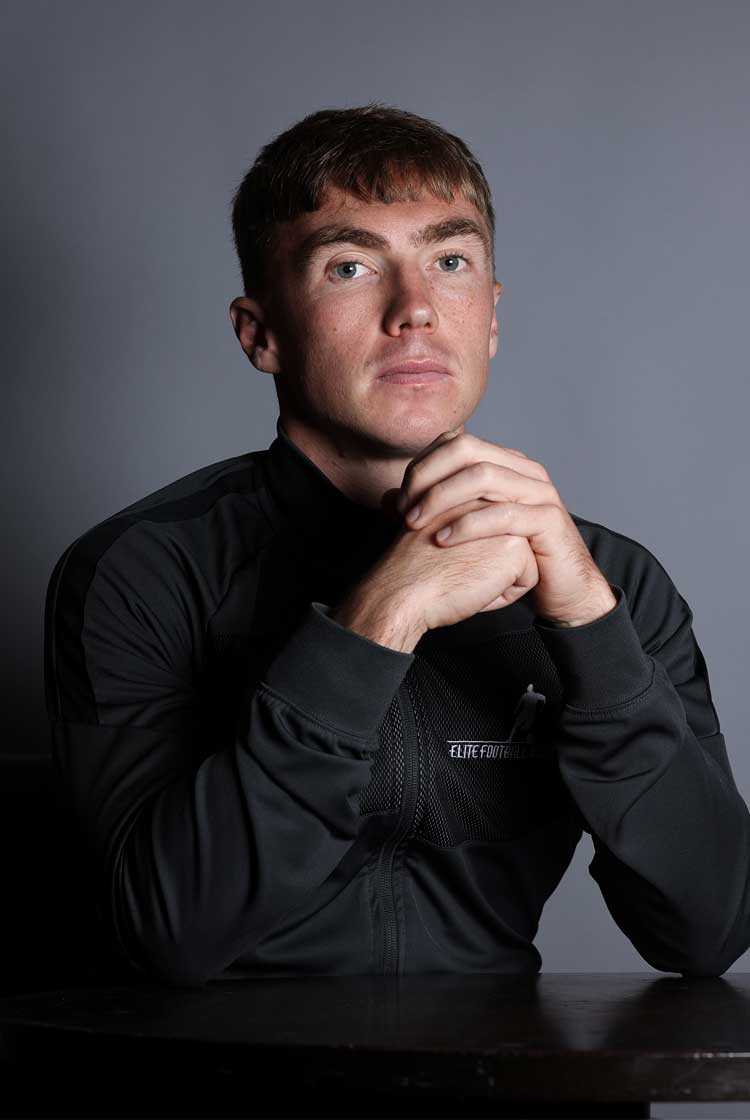 It feels very weird to be referred to as a coach.

I am a coach, I suppose, but I’m still very much a player in my head. Even if I am coaching and learning to be a coach, it still feels odd to be called one.

But my first steps into coaching have felt like the natural path for me.

I did my FA Level 2 when I was in the academy at Nottingham Forest. It was mandatory for all players in the youth team there to do their Level 2 badge – nowadays, they have to do their UEFA C – and I felt comfortable straight away.

The guy taking the sessions was Brian Borrows, who works with the PFA and used to play for Everton and Coventry. He saw how much I enjoyed it and told me he thought I should continue with my coaching qualifications. He suggested I look into doing my B Licence there and then!

I was still only 17, though. I was so young, and all I really wanted was to get a professional contract.

I spent the next few years really getting my head down and working hard to get into the first-team squad.

Once I had managed that and was playing regularly for Forest, I started thinking about coaching again. I was in my early 20s, and I was interested in dipping my toe into it.

Obviously, I wasn’t thinking about a move away from playing or anything. But I’d have conversations with some of the older lads at the club about coaching, and it definitely interested me.

"No matter what you're doing, kids want something competitive to finish with"

I got the chance to do my B Licence at Forest at the age of 23. Finishing it was delayed a little bit because I moved from Forest to Sheffield United, but I completed that badge by the time I was 26.

I’d also started having conversations with an ex-teammate, Jack Andrews. He had got in touch with me about the possibility of putting on a weekly session in Nottingham for grassroots kids.

We had a think about what exactly that project would look like. Now, two or three years later, I’ve been coaching nine to 15-year-olds more or less every single Monday night.

Our thinking was that, when kids get up to the age of around 18 and start training with a senior team, they don’t get much chance to work on the technical aspects of their game. The focus is always on the next match; it’s almost all tactical stuff and keeping your fitness up.

So, we thought we’d put on sessions for kids that focused entirely on technique. We wanted to give kids hours and hours of coaching of their shooting, their dribbling, their passing. All different parts of their game that might get neglected later on.

The hope was that giving the players these extra sessions would give them an advantage as they got older, and their teams’ training was geared more towards match preparation.

"At 27, I'm the youngest person on my A Licence course"

It turned out that we had to rethink a little, because no matter what you’re doing – even if you’re focusing on shooting – players want something competitive at the end. They want some small-sided games to finish with.

We still want it to be about enjoyment for these kids. The last thing you want is a young lad not wanting to go to training. It has to be engaging for them – and, most of all, fun.

I remember some teammates when I was younger who found training a bit of a chore. They fell out of love with the game a little as a result.

So, we have a real focus on making sure the players have enjoyed themselves. That’s the first thing we ask about after a session: “Did you enjoy it?” We make sure we get feedback from the parents, too, so we know how to improve.

It has meant that, by 27, I’ve got a fair bit of experience under my belt. So, I decided to get started on my A Licence.

I am – just about – the youngest person on that course. Sunderland’s Tom Flanagan is also on it, and he’s a couple of years older than me. I don’t want to retire the other guys early, but they are a bit older than us! They are at a point in their careers where they’re thinking more about coaching roles than Tom and I.

Sheffield United are great with giving me the tools to learn and improve. Jack Lester, the head of academy, and Paul Heckingbottom, the Under-23 lead coach, are so supportive. They push me to get better at coaching, and they definitely make me want to go further with it. They let me take the academy lads for training, and I can use them in my assessment on my A Licence, too.

When I was a youngster at Forest, I was good mates with Chris Cohen and Andy Reid (below). They are both a bit older than me, but we seemed to think about the game in a similar way. They’ve both gone on to become coaches – which is no surprise to me – and that has influenced my thinking, too.

The turnover of managers at Forest meant I saw loads of different styles of coach. I’ve seen loads of different ways of doing things. That might be what has influenced me most of all. I think I’ve got a good, rounded view of how to be a good coach.

My coaching has helped me on the pitch as well, I'm sure.

I’ve found myself not only noticing things that I’m doing wrong, but also recognising how I could solve problems, too.

There have been times when I’ve lost the ball early on in a game. Normally, I wouldn’t really think about it. I might just think I’m not having the best game.

Now, though, I realise if I’m not finding the right space, or I’m not checking over my shoulder regularly enough. I recognise why I lost the ball. Scanning is something I try and drill into young players, so why shouldn’t I be telling myself to do it, too?

There are also times when I’ve noticed space on the pitch that, as a team, we need to cover better, or that we could try and exploit. I’ll happily call a teammate over to tell them when that happens, too.

I might have to be selective with what I say or how I word it, depending on who I’m speaking to. But it generally seems to go down well – especially when it works!

Some players might notice these things naturally, but that wasn’t the case with me. I’ve definitely noticed an improvement in that regard since I’ve started coaching.

I’ve not had to do it yet, but I think I’d feel comfortable enough to speak to the gaffer about making a tweak if I think I’ve noticed something out on the pitch that could be improved.

I’m now a lot more aware of what’s happening everywhere, rather than just focusing on myself.

"I had thought about being a physio, but I know I wouldn't be able to keep my mouth shut!"

Chema Sanz, the assistant to Slavisa Jokanovic, has been really open with me, and we’ve had some great conversations about the team. We agree on a lot, and he’s particularly open to hearing the players’ opinions. All of the coaching staff are, really.

Our analysis department is really good, too. Since I’ve been coaching, I’ve managed to use what they give me so much more.

I’m able to watch clips back and think about why something went wrong, where previously I might have just seen that I did something badly and thought: “Oh, well, that needs to be better.”

I’ve been able to take things away and work on specific parts of my game. I can see the improvements in my game that have come out of my coaching. My awareness has got way, way better.

I get a lot of enjoyment from conversations I’ve had with Billy Sharp. He has done his A Licence, and we chat about the things we think the team needs to do better.

He’s a bit older than me so he’s a bit more of a vocal leader, but I might try and drip-feed the odd thing to him quietly. We’ve been fortunate in that we’ve been agreeing on things, though, so we’re making positive suggestions to the team.

"I want another crack at the Premier League"

I’ve known for a long time that I’m going to stay in the game once my playing days are over. Once upon a time, I had considered physiotherapy.

Now, with the way I am about the game – the opinions and understanding I’ve got – I don’t see any way I could be a physio and not have the opportunity to have my say on the team. I’d find it too hard to keep my mouth shut!

I’m enjoying the coaching I’ve done, so it will certainly be something I look into more once I’m nearer the end of my career. And, who knows, maybe management as well.

But for now, I’m still very much in the peak years of my career and my focus is on getting back into the Premier League.

The 2020/21 season wasn’t a very good season for us, but I still really enjoyed it. As soon as you’re out of the Premier League, you miss it. I want another crack at it as soon as possible.

I’m not thinking about a full-time move into coaching just yet. Eventually, though, it will become my main focus.