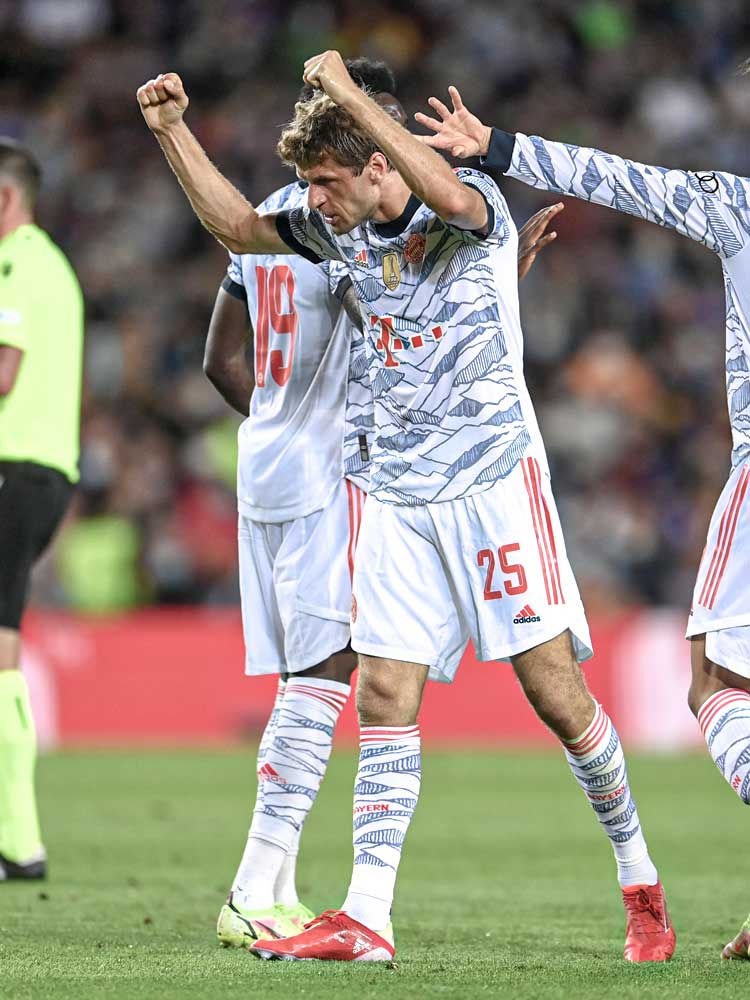 Bayern Munich started their Champions League campaign with a convincing victory at Barcelona, which provided the latest demonstration of the extent to which Barça have been weakened by the departure of Lionel Messi. One goal in the first half from Thomas Müller, and two in the second from Robert Lewandowski, rewarded their dominance. "At the start, we had some problems defending against (Memphis) Depay in the final third," said Bayern's manager Julian Nagelsmann. "But we handled that and played well after. I think Barça didn't have any opportunities at all in the first half. We defended very well." His opposite number, Ronald Koeman, said: "We know we're missing a lot of players in attack and we have to wait a few weeks to have more options and more speed going forward. I don't want to look for excuses but everyone knows the problems we had with the players who were unavailable."

Barcelona were organised by their manager Ronald Koeman into a 3-1-4-2 formation led by Luuk de Jong and Memphis Depay. Their visitors, Bayern Munich, defended with a 4-2-3-1.

Bayern pressed with energy and intensity and with a man-oriented approach that forced longer passes and technical errors. The ballside full-back took his opposing wing-back, their wide forwards prioritised Barça's wider central defenders, and Robert Lewandowski was positioned between Gerard Piqué and Marc-André ter Stegen. With Thomas Müller occupying Sergio Busquets, and Leon Goretzka and Joshua Kimmich taking Pedri and Frenkie de Jong, Barça struggled to deal with the intensity with which they were confronted, and often had little choice but to play straight passes into the feet of those moving to receive while facing their own goal. That, too, proved a pressing trigger for Bayern, who recovered the ball in Barça's half on numerous occasions.

Barça's furthest striker withdrew into a ballside position in midfield when the relevant wider central defender had possession, in an attempt to tempt Bayern's wide attacker into pressing that central defender when one of Bayern's midfielders had already taken his opposite number. Given the other striker was already occupying the ballside defender, the spare defender considered it too risky to stray from his position, ensuring that Barça could create two-on-ones in half-spaces and then progress possession. Bayern, in turn, sought to counter those efforts via the intensity of their press, which potentially kept the in-possession player's head down, and through limiting passing angles into the spare opponent.

Barça's wing-backs provided their width, and their strikers and central midfielders made forward runs, which left Busquets and their three central defenders to defend. Koeman's team also regularly sought to switch play and deliver crosses into the penalty area, but none led to goalscoring opportunities. They were more convincing when they instead played quick, one-touch passes through midfield, and complemented those passes with third-man, penetrative runs and runs in behind from their strikers and wing-backs. Even if goalscoring chances continued to elude them, they posed a greater threat.

Julian Nagelsmann set Bayern Munich up into a 4-2-3-1 formation led by Robert Lewandowski. Their opponents, Barcelona, defended with a 5-3-2, via their wing-backs withdrawing into defence.

Barça offered an inconsistent and passive out-of-possession strategy. It first appeared likely that Pedri and Luuk de Jong would press their opposing central defenders, and that Memphis Depay would take Joshua Kimmich, but as the evening progressed, Pedri withdrew into their midfield three, and between them Depay and De Jong attempted to take Kimmich, Dayot Upamecano and Niklas Süle, and did so without success.

It was both teams' out-of-possession approaches that largely determined what unfolded. Barça were regularly forced into adopting a back five that Bayern succeeded in progressing around; they drew Barça to one side of the pitch while overloading the opposite side, and then played a routine, diagonal pass into the opposite half-space to eliminate Barça's midfield. With the influential Kimmich their deepest-positioned midfielder, Leon Goretzka adopted a more advanced role; Barça's determination to negate Kimmich often involved both strikers and a midfielder surrounding him and too little pressure being applied to the ball carrier, inviting Bayern to move the ball elsewhere and eliminate three opponents.

Bayern consistently succeeded in creating and finding a free player in midfield. Thomas Müller drifted wide, and Leroy Sané withdrew into the relevant half-space, at a time when Barça's midfielders were committed to pressing Kimmich and Goretzka and  their wing-backs to their opposing full-backs, stretching Sergio Busquets, who was left attempting to monitor the movements of Bayern's front four.

The passive nature of Barça's defending proved damaging when Bayern scored their opening goal – minimal pressure was being applied to Müller when he sought to shoot, and from 10 yards away Eric García then turned his back on Müller's shot. Bayern largely controlled what unfolded in the midfield third, partly because of Barça's desire to preserve their back five, which in turn ensured Bayern's combination play in the attacking third had to be extremely effective to create clear goalscoring opportunities. Their movements and intentions were largely admirable, but the number of bodies they encountered in the penalty area limited space, and contributed to chaotic attacks in which shots were blocked, deflected and saved.

When Ronald Koeman made changes, his team played with increased energy, and their out-of-possession approach improved, even if defeat was already essentially certain. They applied increased pressure to the ball, and their press was being supported, which undermined Bayern's momentum, even if Bayern appeared capable of doing more if they had needed to.