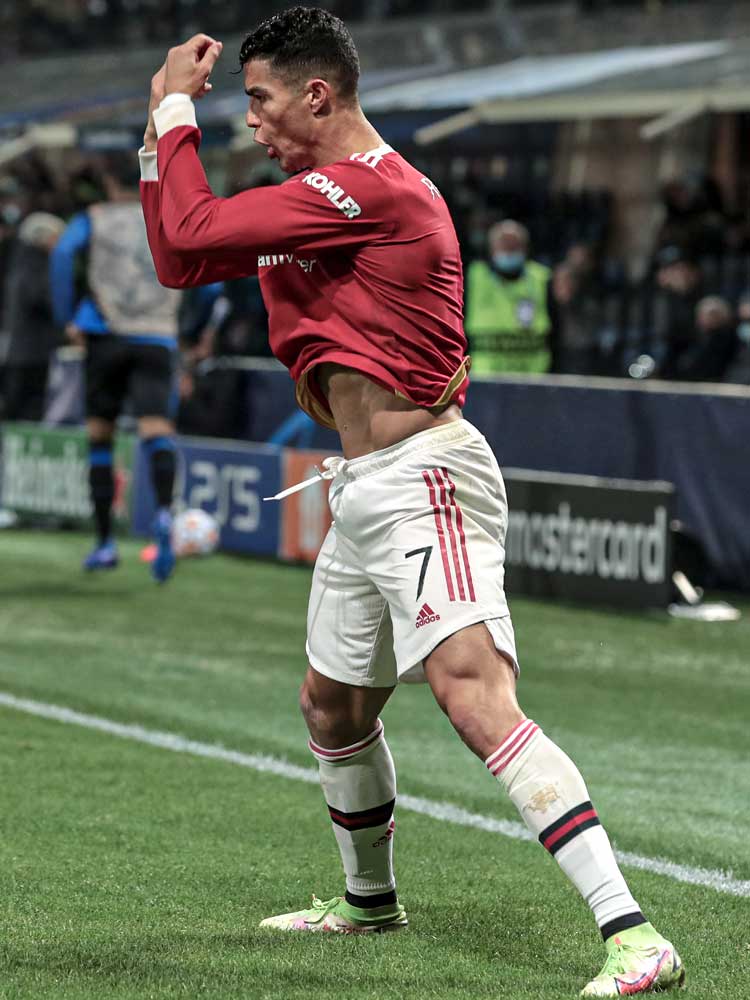 Manchester United twice recovered from a goal down to remain top of the competitive Group F and on course to reach the knockout stages of the Champions League. At risk of falling to third, behind both Atalanta and Villarreal, they were rescued by fine finishes from Cristiano Ronaldo in stoppage time of both the first and second halves. Josip Ilicic, and then Duván Zapata, had given Atalanta the lead. Ronaldo's second goal was his 127th in all competitions for the club, and therefore meant him overtaking their manager Ole Gunnar Solskjaer in the goalscoring charts. "Nobody can question the character of these players," said Solskjaer, whose team, like Villarreal, have seven points from their four fixtures. "They just don’t give up, don’t give in and keep going. We had to make a few changes and they worked. But Cristiano Ronaldo is just incredible. His technique on that volley was incredible." His opposite number Gian Piero Gasperini said: "In the Champions League, great players can change a game that you deserved to win and then don’t. A third goal would’ve killed it – that was the case in Manchester, too."

Atalanta built through wide territory...
Atalanta sought to progress possession around Manchester United's front three. The movements of their front two, Josip Ilicic and Duván Zapata, supported their midfield line and wider central defenders because of the combinations they encouraged; when United's wider central defenders were drawn out of position, space existed for penetrative forward runs to be made, and it was usually Mario Pasalic who provided them (below). Their opening goal was created when Zapata drifted wide, Remo Freuler and José Palomino advanced, and Joakim Maehle moved in behind; penetrations through the inside channel repeatedly posed an attacking threat.

... and switched play
When Marcus Rashford and Bruno Fernandes retreated into deeper territory, the wide areas and inside channels Atalanta had been targeting became congested, so Freuler and Teun Koopmeiners withdrew into deeper positions to encourage the wider central defenders behind them to advance. In so doing, it became possible for the two central midfielders to switch play into the relevant wing-back (below) or a wide-moving striker. Pasalic, in turn, adopted a more advanced position; the spaces behind Eric Bailly and Harry Maguire also remained a priority.

Change of role for De Roon
As in the fixture at Old Trafford, during the second half Martin de Roon was moved into midfield (below), from where he advanced to occupy one of United's central defenders. Atalanta's front two continued to move into wide territory and then make runs in behind in an attempt to capitalise on the increased spaces that existed between full-back and central defender after United had reorganised to defend with a back four, from a five. When United's full-backs moved to press in the direction of their opposing wing-backs, those spaces became bigger, and their existence led to Zapata restoring the hosts' lead.

... and for their front two
Atalanta finished with their front two seeking to remain central (below) instead of drift wide. Against that, United's double pivot sought to cover access into them, and United's full-backs more effectively pressed Atalanta's attempts to build through wide territory. With the hosts also struggling to retain possession with the same consistency during the second half, when they were also working to contain the attacking threat United posed through the centre, their three central midfielders remained closer together which, though providing a passing option for their wing-backs, reduced their potential to penetrate forwards.

Building over Atalanta's defensive block
Atalanta's narrow front three prioritised covering the inside channels and pressing United's three central defenders. Their two central midfielders also aggressively pressed Scott McTominay and Paul Pogba, limiting the extent to which United could build through central territory. United therefore played more direct passes over the pressure being applied (below) and into space in the inside channels, where Fernandes and Rashford had started as number 10s, and where Cristiano Ronaldo was later drifting into. Ronaldo's aerial presence made it possible for United to build into the attacking half, but when Atalanta regrouped it again became harder for United to progress through their compact defensive block.

Returning to a 4-2-3-1...
The injury suffered by Raphaël Varane prompted United to adopt their more familiar 4-2-3-1. With Atalanta's two central midfielders mostly focused on United's double pivot, Fernandes was able to exert a greater influence by withdrawing into deeper territory to link play under reduced pressure (below), and him doing so proved essential in his efforts to link with Ronaldo. The movements and positioning of Rashford and Greenwood in the inside channels also attracted the attention of Atalanta's wider central defenders, and ultimately complemented Ronaldo and Fernandes – who combined to create United's first equalising goal. It was United's wing-backs Luke Shaw and Aaron Wan-Bissaka who provided their attacking width and occupied their opposite numbers.

... and therefore becoming more fluid
United were increasingly fluid during the second half, and largely because of their change of shape. Shaw held his position wide on the left, and their double pivot provided support from behind the ball and remained braced to cover ahead of the two central defenders behind them. Wan-Bissaka both attacked infield and provided overlaps from the right, where Fernandes and Greenwood also rotated (below); Ronaldo and Rashford retained more central positions to continue to combine behind Atalanta's central midfielders.

... before using a front two
United finished with a front two of Ronaldo and Edinson Cavani, who were supported by Fernandes and Greenwood attacking through the inside channels. Wan-Bissaka and Shaw provided their width, and United's defensive midfielders made more aggressive movements. Increased rotations towards the left, through the inside channel – where Ronaldo or Cavani drifted to to encourage Fernandes to move infield – unfolded; Fernandes also drifted towards the right so that Greenwood could attack from a more central position. United had an increased grasp of possession during the second half, against Atalanta defending in a low block for lengthier periods, and deserved their second equalising goal.