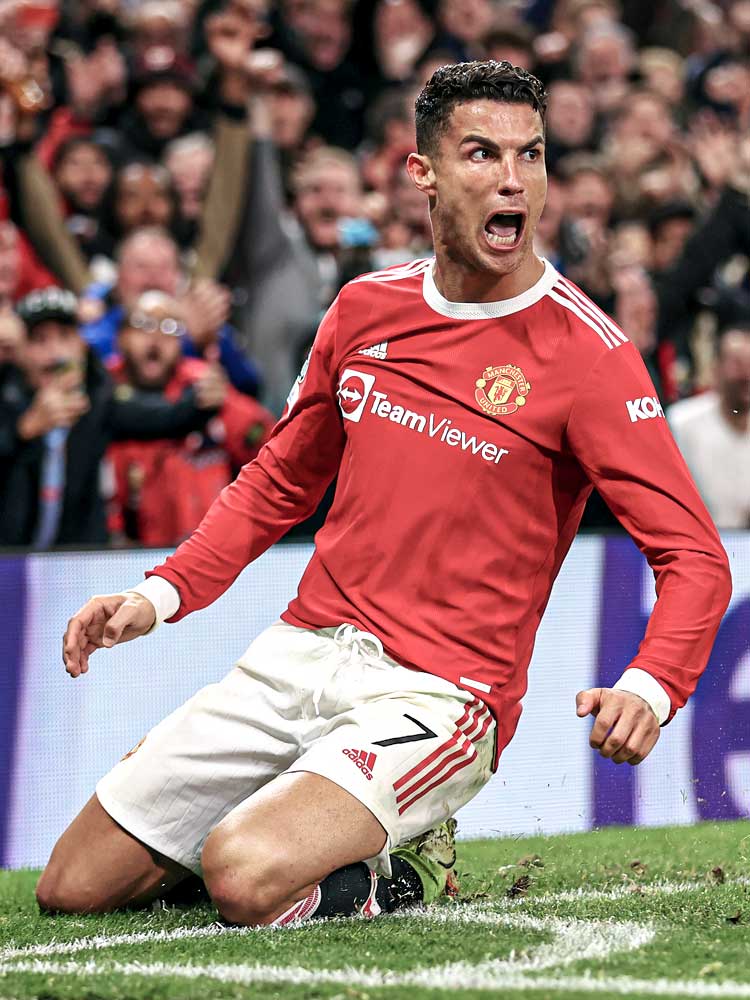 Manchester United staged an impressive comeback from two goals down to move top of Group B and ease some of the pressure that had been building on Ole Gunnar Solskjaer. First-half goals from Mario Pasalic and Merih Demiral left United on course for a defeat that would have threatened their chances of progressing to the Champions League's knockout stages and worsened the mood around Old Trafford. Late goals from Marcus Rashford, Harry Maguire and, in the 81st minute, Cristiano Ronaldo, however, secured all three points. "At half-time, I said make sure we get the next goal, because then we win the game," Solskjaer said. "As long as we don't concede I was pretty sure we would win the game. It was just about taking chances." His opposite number, Gian Piero Gasperini, said: "In an environment like this it just takes a spark to get them fired up again. We had the sensation we were holding out, we went very close to going 3-1 up and their goalkeeper made a wonderful double save, then the 2-2 happened."

United proved difficult to contain...
Manchester United initially found it easier to progress possession towards the right, where, owing to Atalanta's out-of-possession 5-3-2, Aaron Wan-Bissaka came under less pressure when receiving the ball. When Remo Freuler eventually started to prioritise him, Bruno Fernandes was afforded space in central territory (below) to link into those in front of him. Scott McTominay and Fred were often man-marked by Atalanta's front two; Mason Greenwood occupied his opposing wing-back, so Marcus Rashford drifted infield to support Cristiano Ronaldo and, like Ronaldo, make direct runs in behind that Fernandes often targeted.

... and succeeded in adapting...
When Atalanta adjusted to start pressing Fernandes – Merih Demiral, from the centre of their back three, usually did so – Fred withdrew into deeper territory to draw his marker and Luke Shaw pulled wider on the left (below) to tempt his opposing wing-back towards him and played balls in behind. Demiral straying from his defensive line made it easier for Ronaldo and Rashford to pursue those passes; the regularity of their runs was such that Atalanta's defensive line was forced into deeper territory; Fernandes, in turn, could again receive under reduced pressure.

... time and again
In their attempts to reduce the threat United posed from the left, Martin de Roon advanced to press Shaw, and Davide Zappacosta took Rashford, who during the second half attacked from a wider starting position. When Ronaldo drifted to the left to instead occupy De Roon, Atalanta's midfield three were forced to adapt and apply pressure towards Shaw as he advanced, creating room for Fred and McTominay to move into (below) – and potentially make runs into the penalty area to provide support around Ronaldo.

The influence of Solskjaer's substitutions
When De Roon was moved into midfield, United found it easier to penetrate forwards because of the increased space that existed in the attacking third – particularly during moments of transition. Edinson Cavani, Ronaldo and Fernandes often formed a narrow front three (below) seeking to attack with speed – not least when Atalanta were attempting to recover their defensive positions. The width provided by Shaw and Jadon Sancho, and the double pivot formed by Fred and Paul Pogba, whose forward passes and switches of play progressed possession beyond Atalanta's midfield diamond, enhanced that attacking potential.

Atalanta's success in establishing overloads
The front two at the tip of Atalanta's in-possession 3-5-2, Josip Ilicic and Luis Muriel, drifted into the inside channels (below) to draw United's central defenders into wider positions, at which point they bounced possession into an overlapping wing-back or Mario Pasalic, their number 10. Their two deeper central midfielders also moved into wider territory to enhance their ability to access their front two, support attempts to build possession in wider territory, and create overloads against United's full-backs and wide forwards. Atalanta's wider central defenders were, in turn, encouraged to advance into midfield with possession, creating further overloads against United's 4-2-3-1.

Flexibility in attack
The willingness of Freuler and Teun Koopmeiners to withdraw into deeper territory (below) invited Atalanta's wing-backs to advance further forwards; their front two continued to drift wide, but also then had increased space and freedom to withdraw backwards and provide a passing option back infield, giving Atalanta the potential to attack around or through United's defensive block. Pasalic, similarly, moved in the opposite direction to their front two to draw the attention of United's central defenders and discourage them from following Ilisic and Muriel.

Targeting Wan-Bissaka and Shaw
The more advanced positions Atalanta's wing-backs took succeeded in drawing United's full-backs away from their defensive line; Ilicic and Muriel, in turn, targeted the spaces they vacated (below). When they did so, Freuler and Koopmeiners instead moved wide to create passing lanes into the runs they were making; when Duván Zapata and Aleksei Miranchuk replaced Ilicic and Muriel, they even posed an increased threat.

Changing shape
The increased pressure United applied throughout the second half led to De Roon being moved into midfield, where he operated from the base of the diamond, and Freuler and Koopmeiners moving across to support inside of the overlapping full-backs providing their attacking width. Zapata and Miranchuk, forming their front two, sought to make runs off the shoulders of Harry Maguire and Victor Lindelöf, and Ruslan Malinovskyi, as their 10 (below), operated from between the lines and at the tip of their diamond to link from midfield and into the final third.