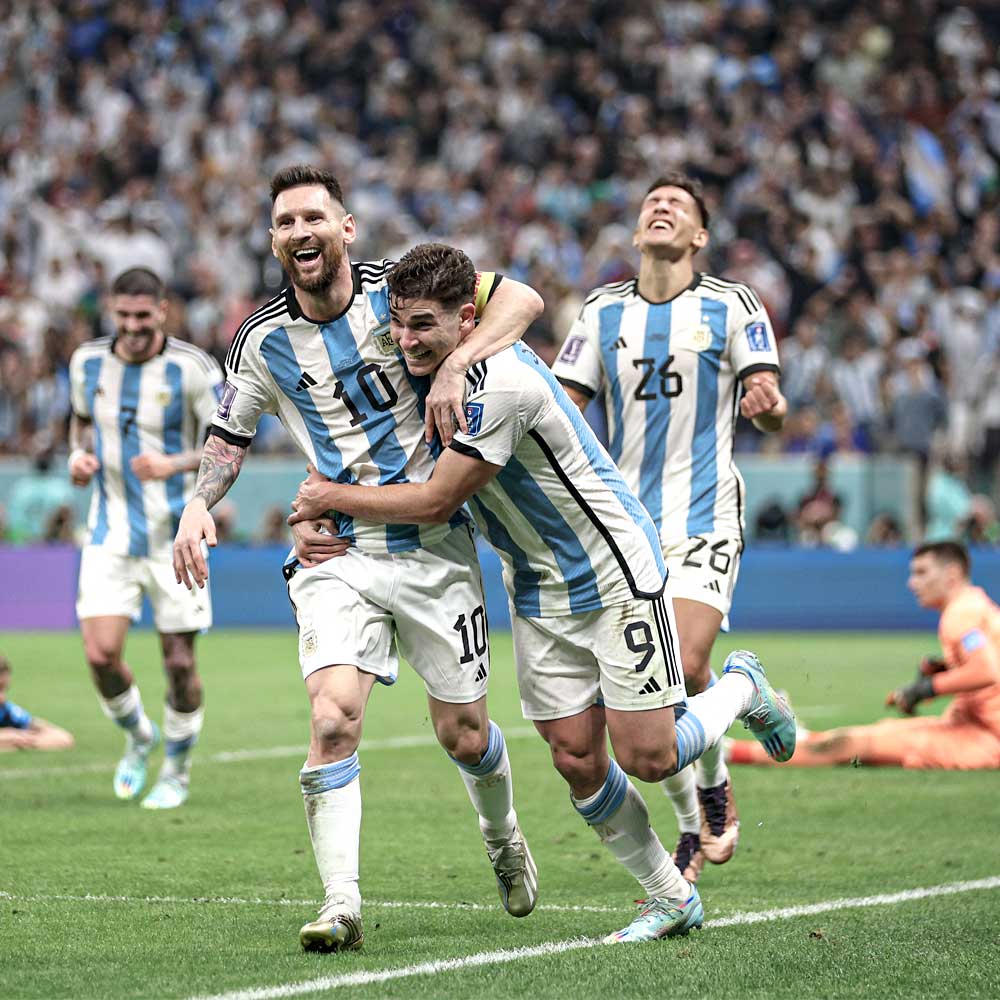 Lionel Messi and Argentina will have the opportunity to avenge their 2014 World Cup final defeat after they stormed past Croatia in the semi final of this year's competition in Qatar. Although they started the game slowly, Argentina never looked overly troubled by their opponents, and they grew into the match as the first half went on. Manchester City forward Julián Álvarez caused Croatia all kinds of problems, and won a penalty that Messi converted to put the South Americans in front, before Álvarez struck a second from a lightning-quick counter-attack. As Croatia fought for a route back into the game after the break, Messi turned the highly-rated Josko Gvardiol inside out and lay a third goal on a plate for Álvarez.

The 44-year-old Argentina manager, Lionel Scaloni, is the youngest manager at the 2022 World Cup, and is still in his first management role in senior football. He is now one match away from legendary status in his home country.

Argentina initially set up in a 4-4-2 shape, but right midfielder Rodrigo de Paul moved inside regularly to form a central midfield three, with Leandro Paredes as the pivot and Enzo Fernández as the other number 8. The three of them protected the space ahead of Argentina’s centre-backs, and they dictated the majority of Argentina’s build-up. Both full-backs pushed forward to provide the team’s width, and left-sided midfielder Alexis Mac Allister moved inside to become a second number 10 alongside Lionel Messi (below). Julián Álvarez stretched the opposition as the highest attacking threat for Argentina, looking to threaten the space in behind.

Early struggles with Croatia’s back five

Argentina initially found it very difficult to break through Croatia’s low block. Croatia’s right winger Mario Pasalic dropped back alongside the back four, and he tracked Nicolás Tagliafico's advances from left-back. Four were then left in Croatia’s midfield, and they then narrowed to block off central access into Argentina’s number 10s. Messi chose to drop even deeper to try and get on the ball and dictate play from in front of the Croatia midfield (below). The problem for Argentina was that this severely limited their chances of getting players on the ball between the lines in the opening 30 minutes. It took a direct pass in behind to find Álvarez to put Argentina ahead, with Messi converting from the penalty spot after Álvarez was fouled. Álvarez then doubled Argentina’s lead as they counter-attacked from a corner. On this occasion, they didn’t even need to break down Croatia’s low block.

Argentina then defended in a low block of their own as they protected their two-goal lead. This meant their main threat came through counter-attacks into the spaces around the outside of Croatia’s centre-backs. Croatia's full-backs were so high during their attacking build-up – with De Paul and Mac Allister forced to track these runs into deep positions – that space was left for Argentina to transition into. It was often De Paul or Mac Allister who began the counter-attacks from deep, finding a central midfielder runner or Messi, who dropped centrally. Álvarez used his pace to stretch the opposition and consistently threaten the space in behind (below).

Switch to a back five

With Croatia dominating the ball and chasing a goal, Argentina converted into a back five after Paredes replaced by Lisandro Martínez. Tagliafico and Nahuel Molina became wing-backs, providing the width in the attack. Mac Allister and De Paul moved into central midfield, as Argentina went man-for-man against the Croatia’s midfield three (below). This meant Croatia continued to struggle to progress centrally, even with so many more attacking players introduced in the second half. With Messi and Álvarez now playing as a front two, they linked up more effectively, and an outstanding dribble from Messi set up his strike partner for a third goal that ended the tie as a contest.

Croatia were set up by Zlatko Dalic in a 4-3-3 shape, with centre-forward Andrej Kramari? dropping deep into midfield. This gave number 8s Luka Modric and Mateo Kovacic somebody to find further up the pitch in a central position, as Croatia made the most of their numerical overload against Argentina’s midfield two, and dominated the opening exhanges. Wingers Ivan Perisic and Mario Pasalic then became the highest attackers for Croatia, with both full-backs advancing around the outside (below). Croatia progressed well through the wide areas early on, but struggled to create much of note.

Despite long periods of possession, Croatia posed little threat on goal in the first half, and Argentina’s central defence were largely untroubled. Kramaric remained high and one of the central midfielders dropped between the centre-backs to form a back three (below). With the full-backs high up the pitch with the wingers, Modric and Kovacic were left one-on-one against Argentina’s midfield two, and their quality on the ball meant they were able to dominate these battles, drive forward, and link into the front three. However, Croatia still created little in the first half, with their final ball letting them down.

Croatia changed to a 4-2-3-1 for the second half, with Marcelo Brozovic withdrawn, leaving Modric and Kovacic as a double pivot. They formed a box with the two centre-backs to protect the central spaces against Argentina’s counter-attacks. The full-backs were now Josip Juranovic and Perisic, who got forward regularly to try and create wide overloads with the wingers. Kramaric played off Bruno Petkovic up front (below) and provided a passing option for Croatia’s central midfielders to progress play.

As the game progressed, Croatia managed to create more of note through the middle due to their change in structure. Argentina were happy to sit back in a deep block, and Croatia built patiently through Modric and Kovacic. Both wingers moved inside to add more central passing options around the two centre-forwards, which meant Argentina’s full-backs were occupied and Croatia’s full-backs were in more space to progress around the outside (below). However, despite their dominance of the ball and the increased presence between the lines, Croatia still struggled to create good chances or hit the target with their attempts. Argentina crowded out attack after attack and saw out a historic win to go through to Sunday's World Cup final.