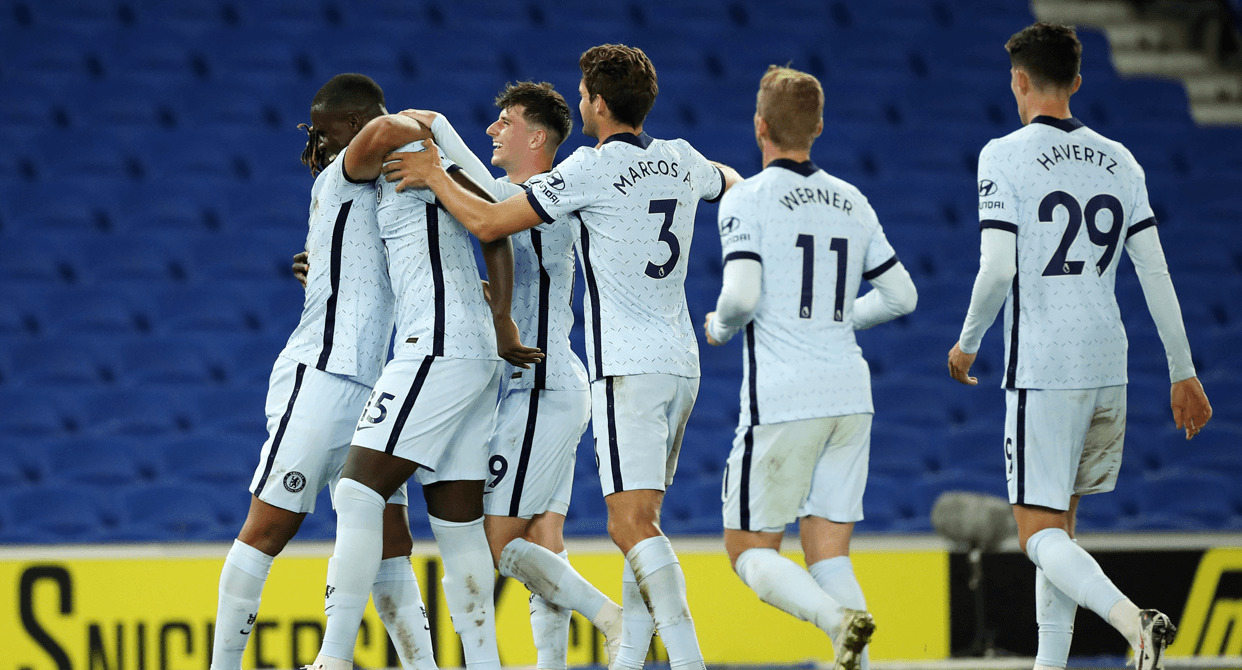 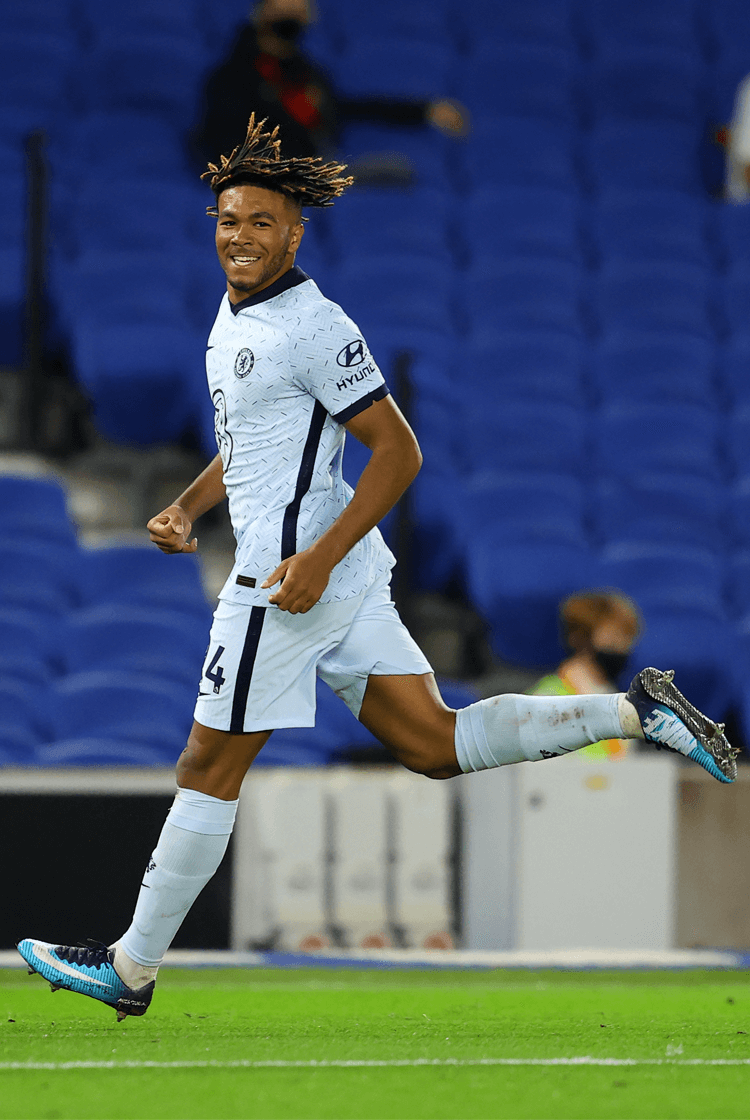 Chelsea's new-look team started the Premier League season with a promising victory at Brighton, but it was a player who was there before they spent in the region of £200m on new players who most caught the eye. There were starts for Timo Werner and Kai Havertz, the highest profile of those signings, but Reece James – among the young players whose progress could potentially be undermined by their summer transfer policy – was responsible for putting Chelsea back on course for victory in the second half with a truly superb strike. Leandro Trossard had just scored Brighton's equalising goal, cancelling out Jorginho's first-half penalty; Kurt Zouma later added a further goal to secure all three points. "To come to Brighton and win is a tough ask," said their manager Frank Lampard. "We've only had a few days, so I didn't expect the kind of football we want to play. We had to do some of the more difficult things, so I'm pleased." His opposite number Graham Potter said: "You have moments against the big teams that you need to have go your way and we need to learn from that. But there are positives. Adam Lallana was enjoying the game, he brings that personality, we are pleased with what he has brought to us and we just have to help him get on the field more often." 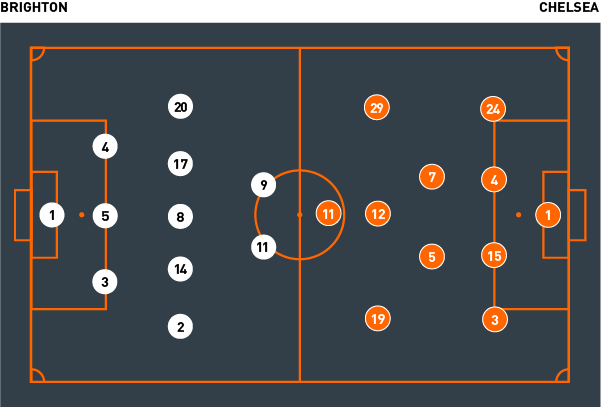 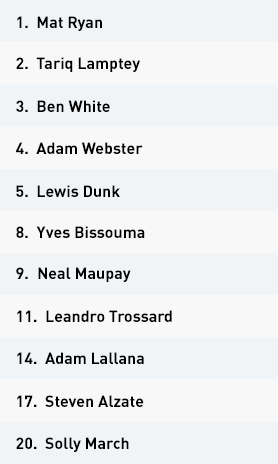 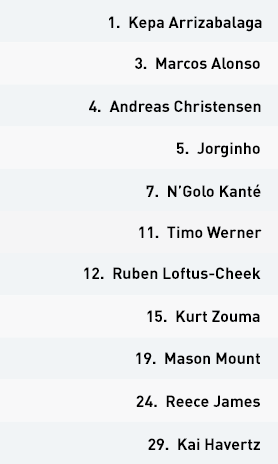 Brighton were organised by their manager Graham Potter into a 3-5-2 formation that featured their high-profile summer signing Adam Lallana in central midfield. They encountered opponents who defended with a 4-2-3-1 that occasionally became a 4-4-2.

They, perhaps unexpectedly, had a greater share of possession than Chelsea, having mostly sought to play out from the back. Chelsea attempted to press them and to engage with positioning intended to overcome their numerical superiority in Brighton's defensive third. Chelsea were most concerned with the Brighton players in central positions, so Potter's team advanced most consistently through early passes into their wing-backs – but those passes had to be early enough that the opposing full-back had not advanced far enough.

A diagonal pass outside was often followed by another one inside, to a forward who had withdrawn to link play, or to Lallana, the most advanced of Brighton's midfielders. There had been attempts at longer passes in behind Chelsea's defence and to their front two, but Chelsea defended convincingly against them. By instead playing diagonal passes outside and then in, Brighton succeeded in turning their opponents towards the ball and away from the remainder of the pitch, encouraging the blindside movements in midfield that helped them to progress possession.


Those patterns also encouraged their wing-backs to advance, and eventually to play crosses; Solly March and Tariq Lamptey were particularly willing to attack, but the strikers' lack of height meant that those crosses had to be particularly accurate. The hosts favoured working possession to the right, where Lamptey relished attacking Marcos Alonso one-on-one; it was through building possession towards the right that Trossard's equalising goal was created.

Lallana's injury, and him being replaced by Aaron Connolly, led to Trossard often operating as an attacking midfielder and Brighton's shape often resembling a 3-4-3. Connolly sought to link play, as Trossard had, but they continued to struggle to create quality goalscoring chances.

Frank Lampard set Chelsea up into a 4-2-3-1 formation, led by Timo Werner, who was supported by Kai Havertz, Ruben Loftus-Cheek and Mason Mount. Brighton reorganised into a 5-3-2 to defend, though Tariq Lamptey and Solly March withdrawing from midfield and into defence.

Chelsea regularly targeted the spaces behind Brighton's defence. Werner was particularly willing to make runs in behind, and his variety – running across defenders, dropping and spinning, and diagonal runs between opponents – tested Brighton far more than straightforward vertical runs would have. Lampard also encouraged his front four to make movements intended to disrupt Brighton's defensive shape; typically, two moved towards the ball and the other two advanced, and were then targeted by passes.

Brighton sought to press Chelsea at goal-kicks, but operated with a mid-block if their visitors had a convincing grasp of possession; if pressing, their back five remained withdrawn to defend against Chelsea's front four. They proved difficult to break down – Chelsea recorded an expected goals total of only 1.44, against Brighton's 1.70. Frank Lampard's team scored from a penalty, from distance, and via a deflection at a set-piece.


Kepa Arrizabalaga played long from those goal-kicks, even though Chelsea's structure suggested they would play short. Their attempts to win and retain direct balls disappointed. On the occasions they advanced, Havertz and Mount were used in the half-spaces, instead of as traditional wingers, encouraging Reece James and Marcos Alonso to advance and deliver low crosses.

Werner thrived on that nature of attack in the Bundesliga, and if he wanted square deliveries or cut-backs, Brighton defended well against them, even if one block conceded the corner from which Chelsea scored their third goal. The visitors might also have scored on the counter; Werner favoured making runs that involved him moving to create a passing lane at the last second, but the poor timing of those passes led to promising chances coming to little.