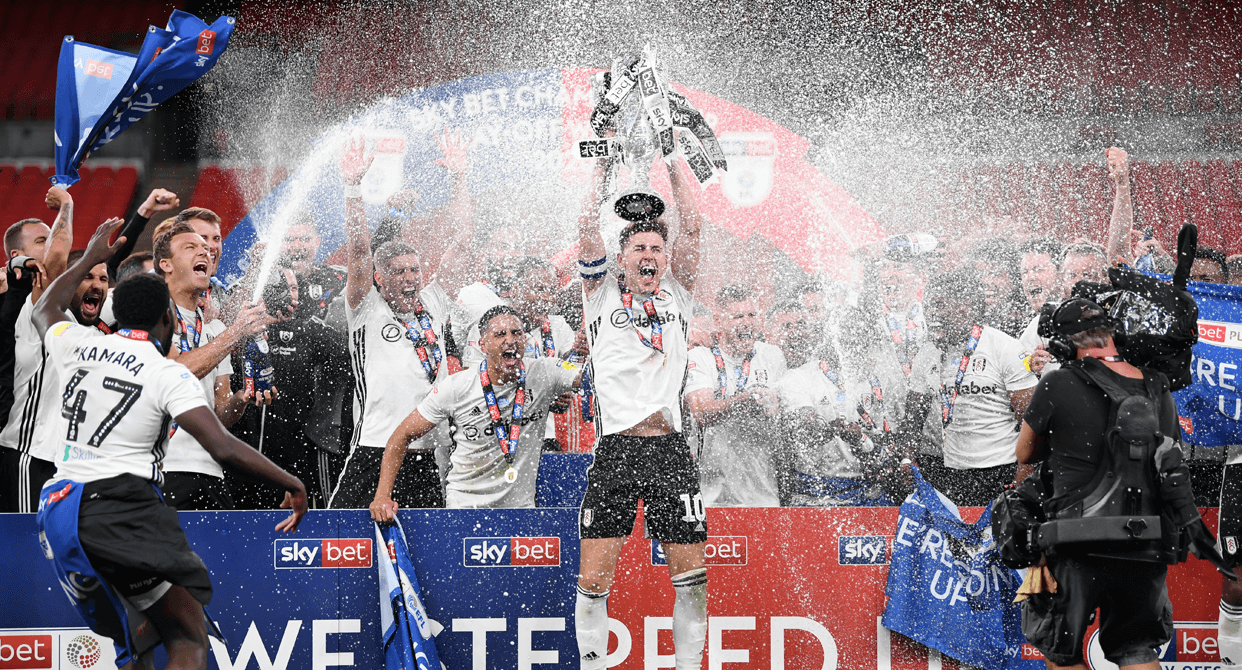 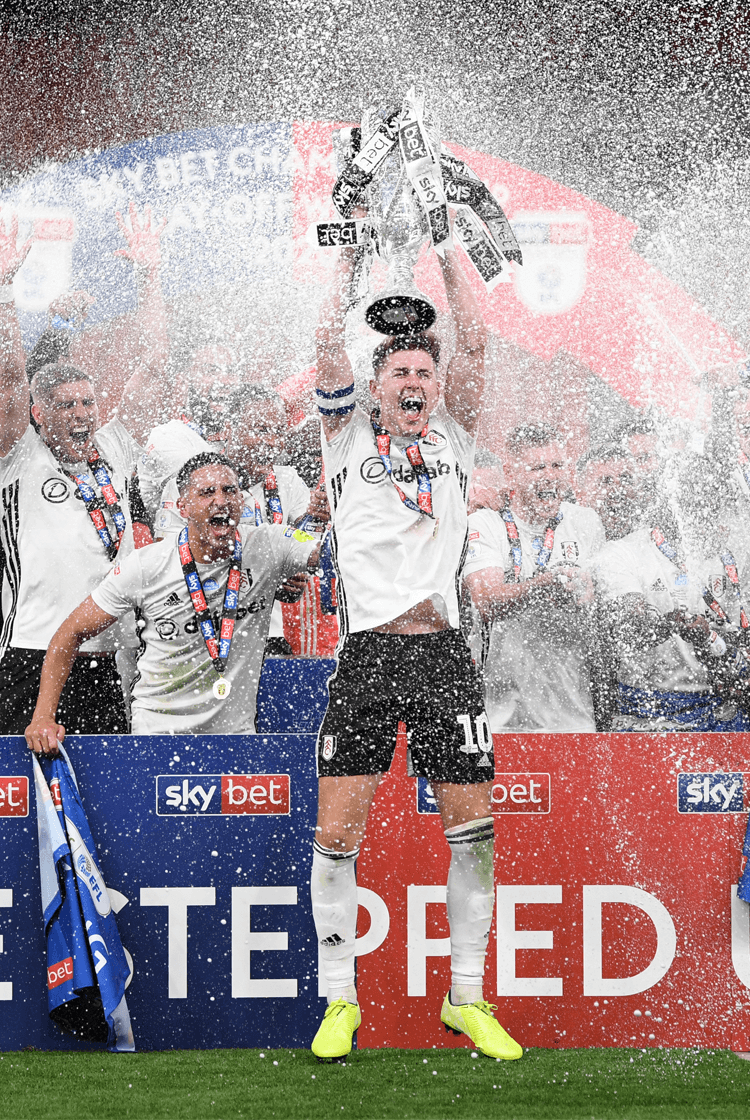 Fulham secured an immediate return to the Premier League after beating rivals Brentford in the Championship play-off final with two extra-time goals from Joe Bryan. The left-back's free-kick, from 40 yards, beat the surprised David Raya, and he scored again on the break as Brentford desperately sought an equalising goal. Henrik Dalsgaard's header, in the fourth minute of added time, proved only a consolation in an otherwise largely cagey encounter. "What makes me so happy is I see a group of players who only a year ago were struggling psychologically; didn't have a mindset or mentality," said Fulham's Scott Parker, who inspired his team to promotion in his first full season in management. "I've driven this team every single day and what makes me proud is I've stood on the touchline and seen a team that represents what I've been saying over the last 12 months." Brentford's manager Thomas Frank said: "We have gone from a mid-table club to a team who, in the league table, was the third-best team. We are very fine margins away from the Premier League." 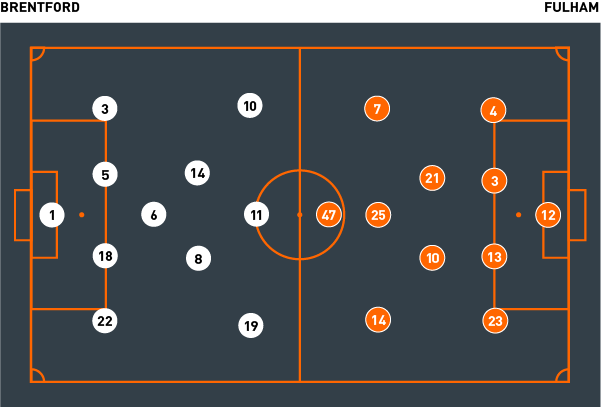 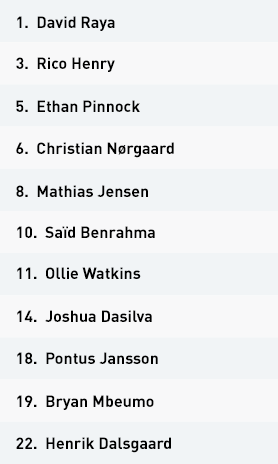 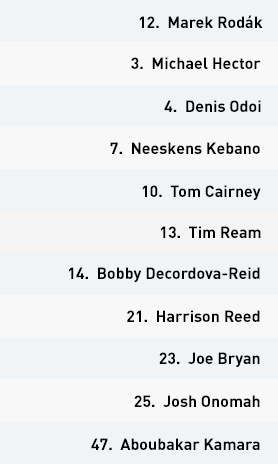 Brentford were organised by their manager Thomas Frank into a 4-3-3 formation, from which they initially struggled to link from defence and into midfield. Fulham, who defended with a 4-2-2-2, were often prioritising the spaces around Christian Nørgaard, and with their wingers instructed to press their opposing full-backs, their full-backs also advanced to press Brentford's wingers.

The double pivot at the base of Fulham's midfield monitored attacking midfielders Mathias Jensen and Joshua Dasilva, behind Josh Onomah and Aboubakar Kamara working to screen access into central midfield; between them, they continued to frustrate their opponents. Brentford moved possession from central defence towards the wider spaces before then attempting unsuccessful forward passes; further direct balls were also attempted over midfield, but then too rarely secured.

On the occasions Brentford succeeded in advancing into Fulham's half, Saïd Benrahma's movements inside invited Rico Henry to advance from left-back, and from that inside channel away from wider pressure he provided a valuable outlet; Benrahma's freedom also contributed to them offering more of an attacking threat. They regardless had too few periods in possession, owing to the structural changes Fulham adopted when they had the ball, and were largely limited to attacking during transitional moments. The narrow positions their wingers had to adopt while attacking also undermined their attacking potential against what had become Fulham's back three; Fulham's double pivot also protected them in central midfield. It was only with lengthier periods in possession that Brentford posed a more convincing attacking threat.


Wider runs from Jensen and Dasilva contributed to them eventually building around the numbers Fulham offered in central areas. The combination of those runs and Mbeumo's increased the threat they offered and discouraged Fulham's Joe Bryan from advancing from left-back, therefore unbalancing the structure Scott Parker had demanded and limiting their ability to attack from there.

When Dasilva began to operate from the right wing, and Emiliano Marcondes replaced Mbeumo, Brentford began to secure more convincing periods of possession. Their runs from midfield around Fulham's double pivot increased their ability to access Ollie Watkins, and as he drifted from Fulham's central defenders he was finally able to receive possession while facing goal; only the territory he had to move to to do so denied them from posing a threat beyond that defence.

When Fulham again changed shape for extra-time, Brentford were confronted with an increased number of direct balls forward, and they had increased potential in central areas that took Fulham defending impressively and in numbers to overcome. When Parker's team took the lead from a set-piece, Brentford responded by flooding the spaces between the lines with as many players as possible, and built possession with no more than a back three.

Their dominance of the inside channels, and the combinations they offered around Fulham's midfield, contributed to them pressuring their opponents, but Fulham doubled their lead on the break through a combination in the inside channel. By the point of Henrik Dalsgaard's goal, Brentford had already been defeated.

Scott Parker set Fulham up to begin with a 4-2-3-1 formation, from which Josh Onomah, as their number 10, provided an early threat during transitional moments. Thomas Frank's Brentford used a 4-1-4-1 defensive block.

Brentford struggled to break through Fulham’s defensive structure early on, and central spaces proved their most effective area of progress after Fulham regained possession, largely because Brentford's central midfielders pushed high and around the outside of Fulham’s deep double pivot. Aboubakar Kamara’s penetrative runs forward, coupled with Onomah’s ability to receive and quickly turn to attack, helped Fulham progress possession.

When Fulham established lengthy periods of possession, they reorganised into a 3-2-4-1 in which four central players – the two in their double pivot, Onomah, and Bobby Decordova-Reid – created a box around Brentford’s midfield three. Denis Odoi moved to form a back three, and Joe Bryan pushed high to provide width in the spaces Reid had vacated by moving centrally. Though during transitions Fulham’s system was weakened – owing to the number of moving parts required between those transitions – their longer spells of possession often led to them penetrating into the final third.

The threat that Fulham’s midfield box provided also meant that Brentford’s wingers were forced into more narrow positions to offer defensive support in central midfield. Yet whenever Fulham tried to build centrally – through reduced spaces – the width held by Bryan and Neeskens Kebano proved vital. Central passes into midfield – to force Brentford’s midfield to again become narrow – followed by quick passes towards Fulham’s widest players avoided those crowded central areas, and they then attacked Brentford’s isolated full-backs, providing their most effective route to goal.


Brentford adapted to press Odoi and Tim Ream, Fulham’s wider central defenders, and that disrupted their opponents' rhythm. Josh Dasilva and Mathias Jensen also pushed forwards, curving their runs to block passes out of trouble instead of pressing intensely, and forcing Fulham into longer passes from which Brentford were far more likely to recover possession.

Despite Fulham having a central overload, they therefore struggled to progress as they previously had. Brentford’s press protected the central areas of the pitch, and their transitional threats from the right tested Bryan's positioning as Fulham's advancing left-back. Reid also couldn't always drift inside as he previously had, so Fulham’s midfield four were not always in position around Brentford’s three. Switches of play brought some space, but they were unable to pose a threat on goal.

Aleksandr Mitrovic replaced Reid for extra-time, so Kamara moved to the left as Fulham adopted a 4-2-3-1. Bryan continued to offer support behind Kamara, but in a more delayed manner amid Fulham varying their attacking play. They used more direct balls towards the left, when aiming for Kamara and Mitrovic. Convincing goalscoring chances in open play remained rare,  and it took Bryan’s free-kick, which surprised David Raya and snuck in at the near post, for them to take the lead.

Fulham then prioritised maintaining that lead, and absorbed persistent pressure before Bryan scored again after a well-timed forward run, combination and finish. The goal that followed for Brentford was little more than a consolation.