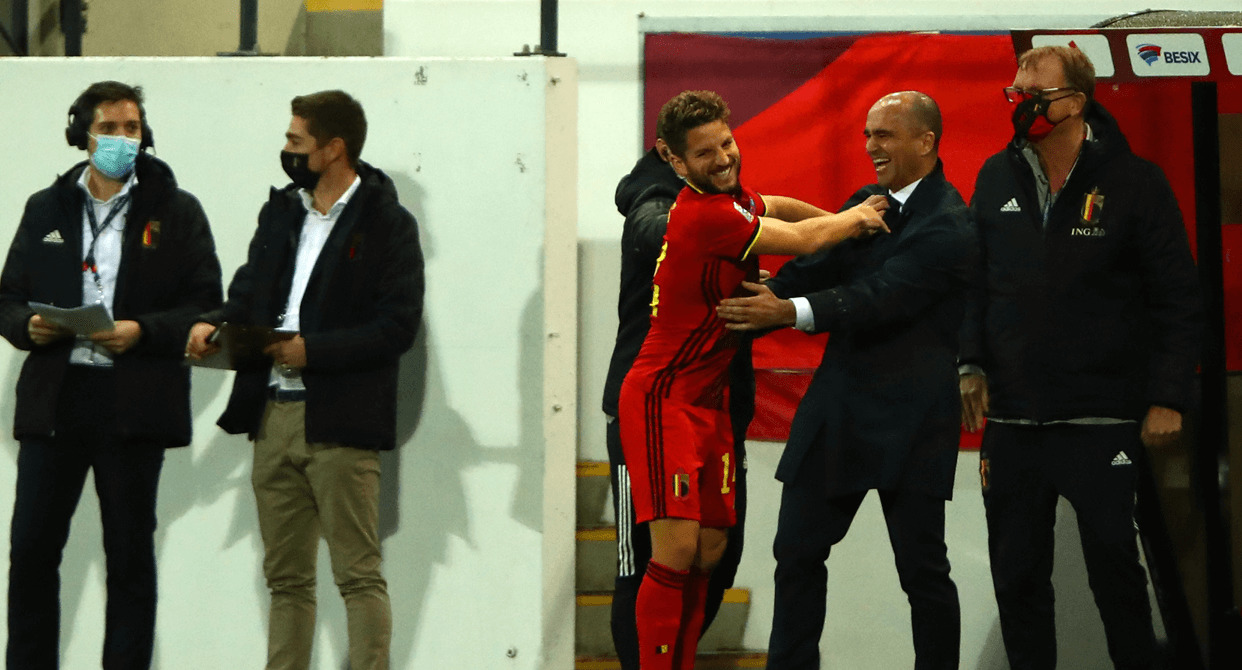 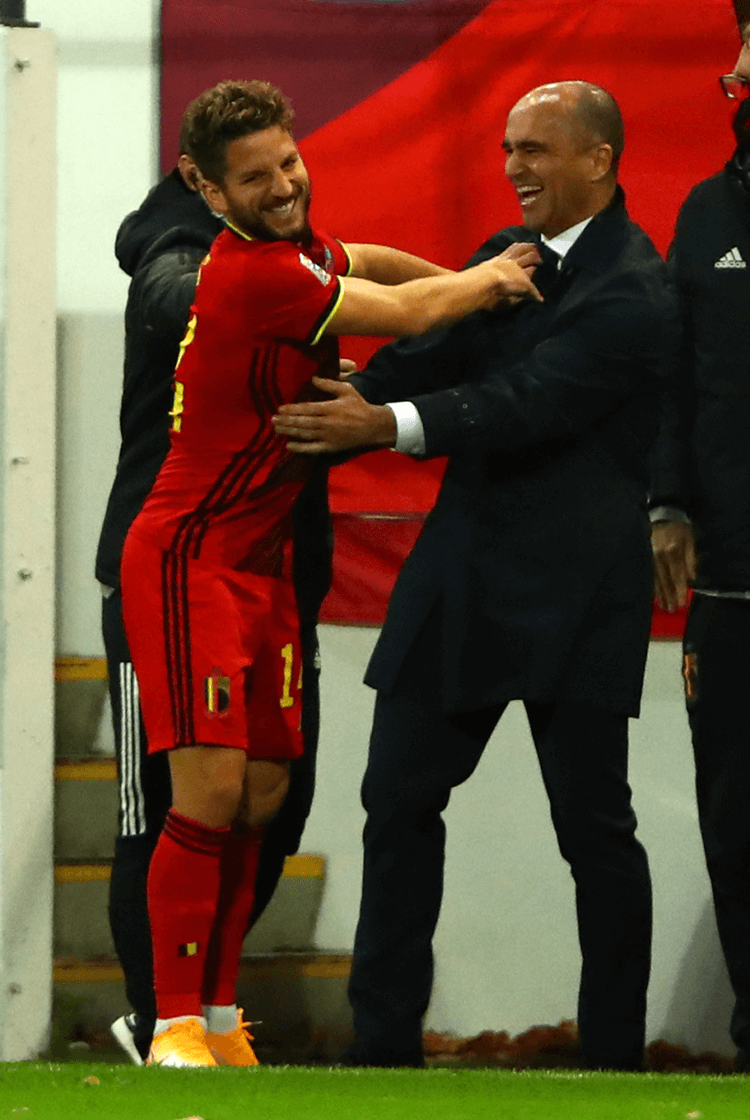 Belgium ended England's chances of a return to the UEFA Nations League finals with a victory that left Gareth Southgate's side third in group A2, five points off first with one game remaining. First-half goals from Youri Tielemans and Dries Mertens left England with too big a mountain to climb and, despite dominating possession, they struggled to create much of significance against Roberto Martínez's team, who are top of FIFA's world's rankings. Southgate was nevertheless pleased with England's display in the absence of some key players, such as Marcus Rashford, Raheem Sterling and Trent Alexander-Arnold. “We don't like losing but enormous credit to the team,” he said. “All the way through they created problems and defended resiliently. I thought we were excellent. I couldn't have enough praise for the players.” 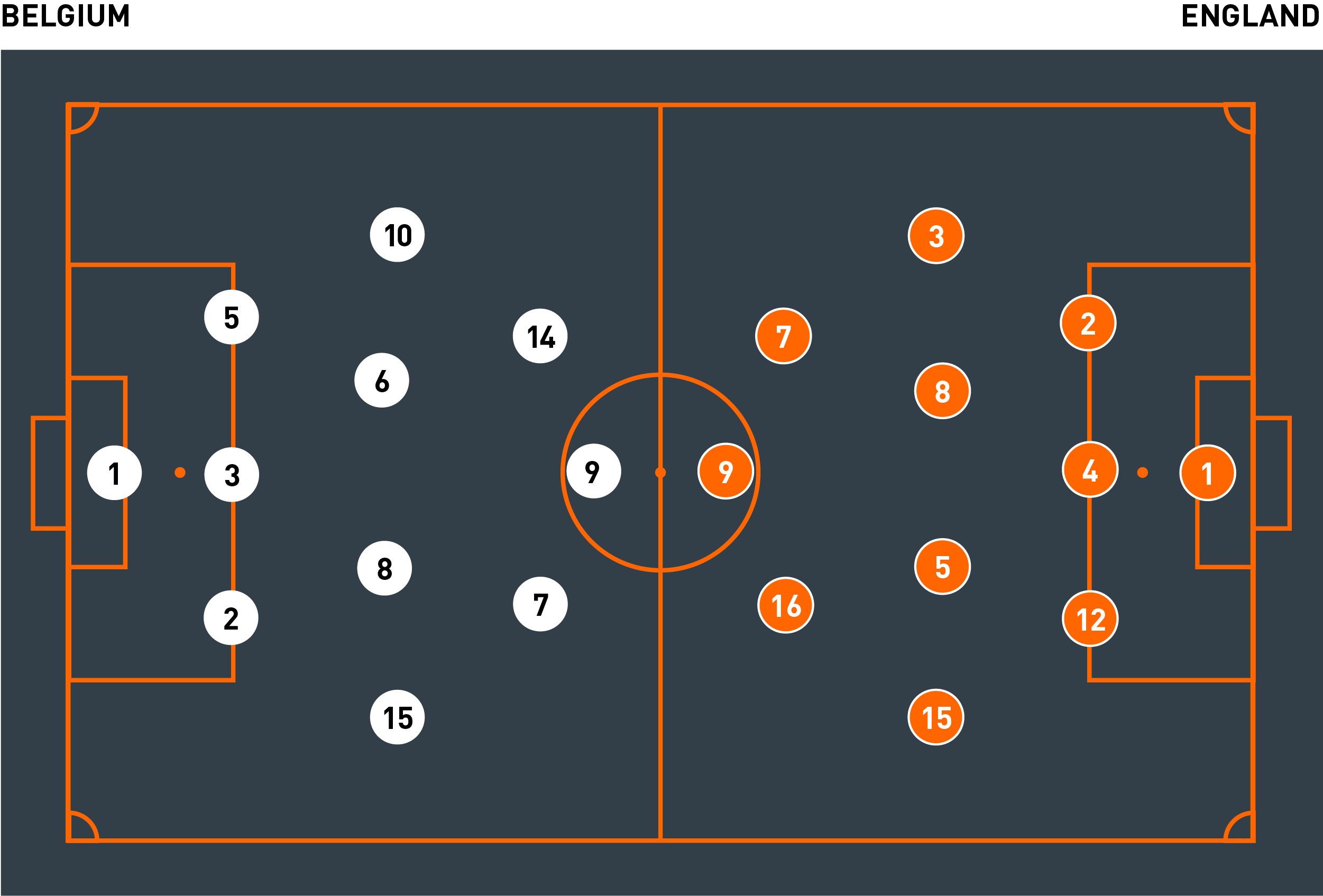 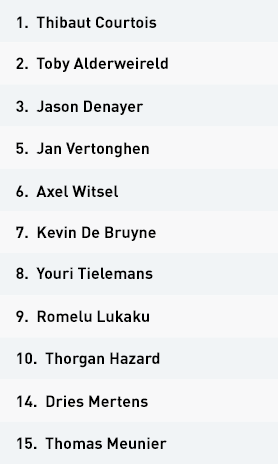 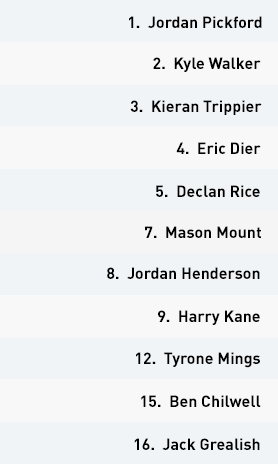 Roberto Martínez set Belgium up in a 3-4-3 formation in possession, with Kevin De Bruyne and Dries Mertens either side of Romelu Lukaku in attack. England used a 5-2-3 when out of possession.

Belgium looked to patiently build from the back, circulating possession across their defensive line in search of a way through their opponents. England's attacking midfielders Mason Mount and Jack Grealish pressed Belgium’s outside centre-backs, and Harry Kane focused on Youri Tielemans, who operated predominantly as Belgium’s deepest midfielder. Jordan Henderson and Declan Rice then picked up Axel Witsel and any of the front three who dropped into midfield.

Belgium found some success by using Jason Denayer, a centre-back, as a spare man in their build-up, with Kane forced to move out to Denayer, leaving Tielemans free. Belgium took advantage by then moving De Bruyne and Mertens inside to create a four-on-two overload against Rice and Henderson.

On the occasions Belgium played through their outside centre-backs, they created diamonds along with a wing-back, the ball-side central midfielder and a wide attacker. That shape allowed for one-touch combinations and blindside movements to progress play forwards.


The hosts were also happy to play direct to Lukaku in attack, and he did a good job of retaining the ball, holding play up, and setting the ball back to midfield. A ball to Lukaku’s feet triggered both forward runs beyond him and a supporting run close to him; his play with his back to goal was very effective, and England struggled to contain him. England almost always sent a centre-back with Lukaku when he dropped to stop him from turning, but the Belgian used his upper body well to hold off his marker.

Despite some promising build-up play, Belgium didn’t offer much threat to the space in behind England’s defence, and they didn’t create many good-quality chances – their best chance came on the counter. However, the two goals they scored inside 23 minutes meant that there was little need to attack and that they were happy to let England have the ball.

England were set up by their manager Gareth Southgate into a 3-4-3 formation, with creative midfielders Jack Grealish and Mason Mount operating in support of Harry Kane. Belgium used a 5-2-3 when out of possession.

England used a similar strategy to their opponents in that their wide attackers moved infield to create a four-player box with Jordan Henderson and Declan Rice around Belgium’s two-man midfield, creating opportunities to try and penetrate Belgium’s first and second lines by finding the feet of Mount and Grealish with direct passes. Belgium’s wider centre-backs were happy to step up and track England's wide attackers to ensure that they couldn’t turn and advance.

Belgium’s strategy came with risks, in that their centre-back left space for England to exploit in behind, but the potential reward of that centre-back stealing possession and launching a counter attack – as seen for the first goal of the game after Jan Vertonghen stepped in front of Mount to win the ball – meant the risk was worth taking. When England’s attacking midfielders dropped to receive the ball, their wing-backs made movements in the opposite direction, hoping to disrupt Belgium's defensive line and to create space in behind for that wing-back.


When England moved the ball wide or into the half-spaces, the wider centre-back on that side of the pitch – Tyrone Mings on the left and Kyle Walker on the right – often made a forward run off the ball to join their attack in the final third. Such an approach has rarely been seen in international football, but it perhaps provides an indication of where Southgate is looking to go with his formation with next summer’s delayed Euro 2020 tournament.

England looked most threatening when they found Grealish’s feet. He was arguably the best player on the pitch, and Belgium resorted to any means necessary to stop him, resulting in him winning a lot of free-kicks in the final third, but England failed to take advantage of those dead balls. Both Grealish and Mount were free to roam in attack, and it wasn’t uncommon to see them both on the same side of the pitch as England looked to create overloads in the final third. Belgium crowded England out effectively in those situations, so England often switched play before delivering a ball into the area.

Another of England’s tactics was to find Kane, who regularly also dropped back to receive a pass to feet. Kane’s hold-up play, protection of the ball and ability to turn led to him fashioning a few chances for himself, but with so many players willing to drop deep, England struggled to stretch play and impact the spaces in behind Belgium's defence.

Despite dominating possession, England lacked quality in the final third and, as a result, failed to create many chances of significance and to test Thibaut Courtois. Southgate will hope that the returns of Raheem Sterling, Marcus Rashford and Trent Alexander-Arnold will ensure improvements in that area of the pitch. On this occasion, England struggled to make their dominance of the ball count.