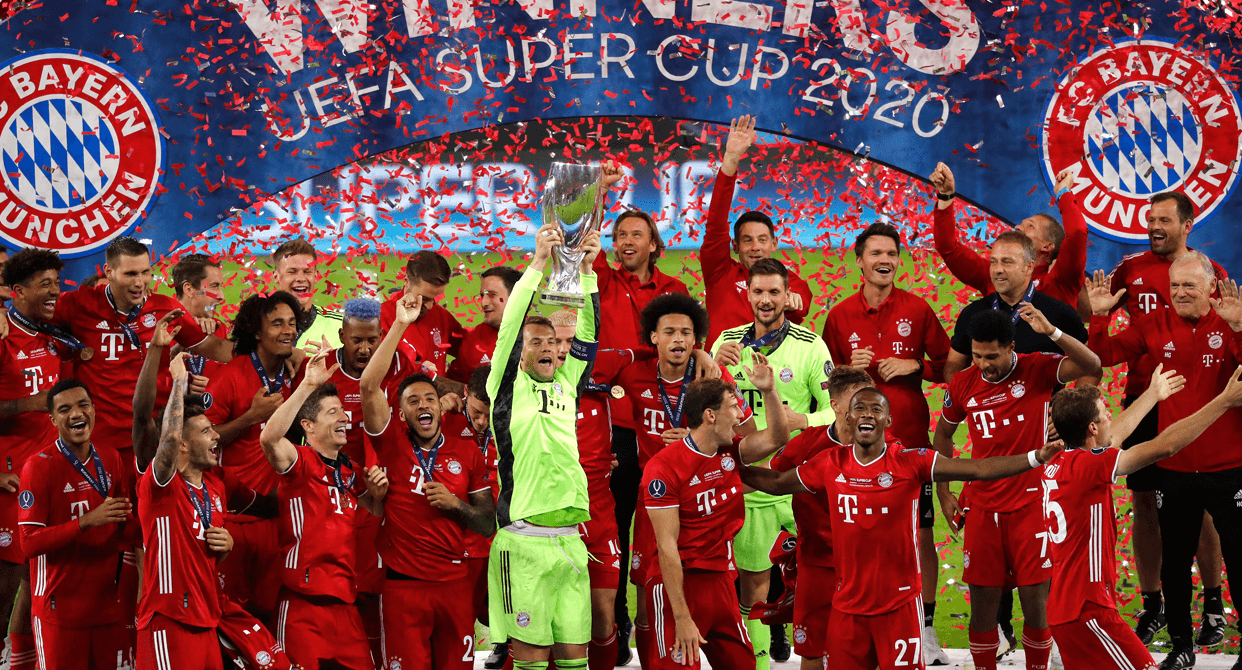 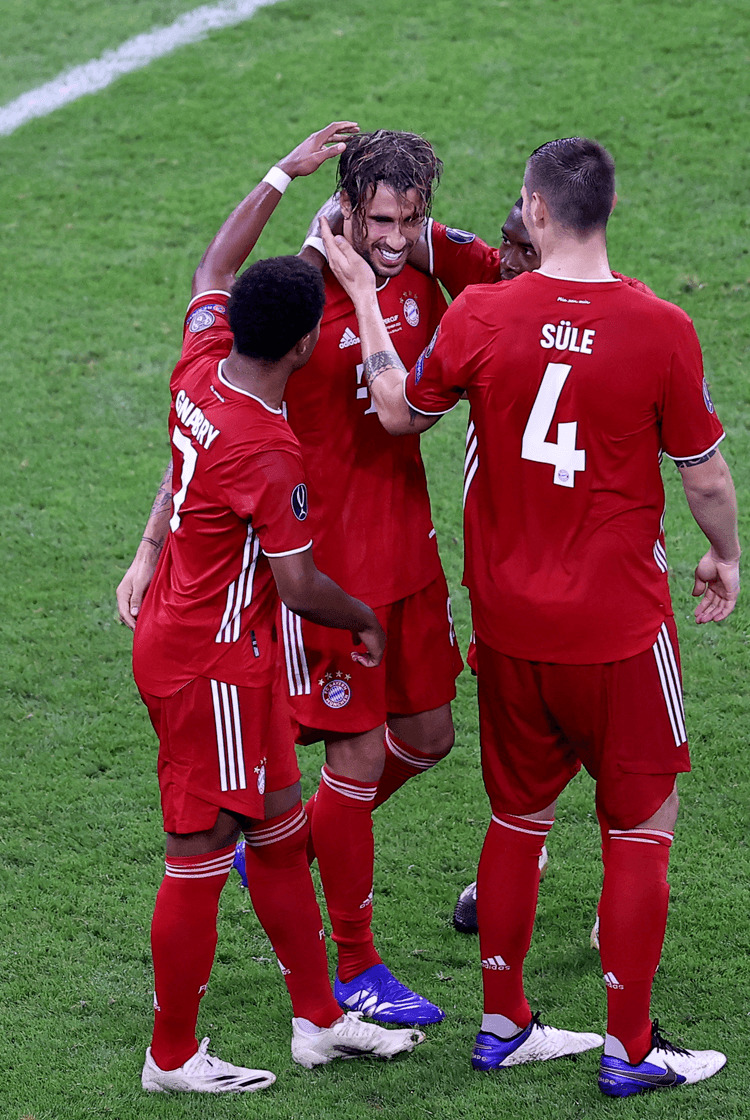 Bayern Munich continued their impressive 2020 by recovering from a goal down to win the UEFA Super Cup in extra-time against Sevilla. In front of 15,180 supporters at Budapest's 67,000-capacity Puskas Arena – making the occasion the first major European fixture to welcome supporters since the football calendar was interrupted by the coronavirus pandemic – they went behind when Lucas Ocampos scored a daring "no look" penalty after David Alaba had fouled Ivan Rakitic. Leon Goretzka scored their equalising goal later in the first half; Robert Lewandowski and Leroy Sané also saw finishes disallowed, before Manuel Neuer brilliantly saved from substitute Youssef En-Nesyri. It was a further substitute, in Javi Martínez, who scored with a header in the 104th minute to secure victory and ensure that Hansi Flick's team remains unbeaten since December 2019. 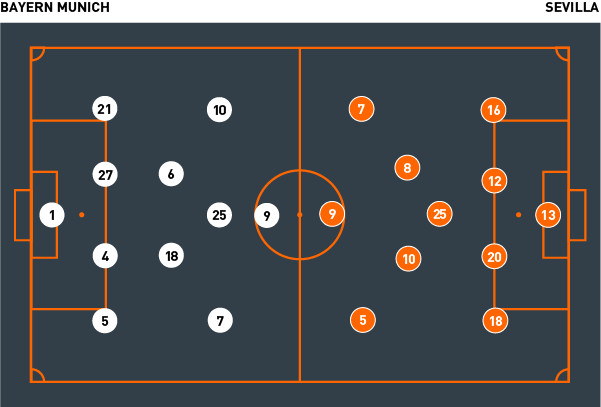 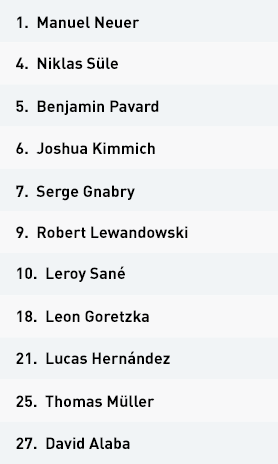 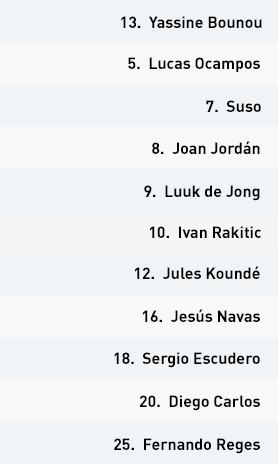 Bayern Munich were set up by Hansi Flick into the same 4-2-3-1 formation that has brought them such success. In the absence of the departed Thiago Alcântara, Joshua Kimmich instead joined Leon Goretzka at the base of their midfield. Sevilla defended with a 4-4-2 mid-block, through Suso and Lucas Ocampos withdrawing into midfield, and Ivan Rakitic advancing to alongside Luuk de Jong.

Bayern largely controlled possession, and sought to build from defence against a team that initially attempted to press them in advanced territory. Kimmich and Goretzka were also given offset positions that meant one regularly played in front of the other. With Thomas Müller drifting into a deeper, wider position to contribute to their attempts to build possession, his marker was also tested over whether to follow him or leave him and risk the ball being advanced.

By playing out against that high press, Bayern found it easier to find space between the lines – Leroy Sané and Serge Gnabry contributed to that by drifting deeper and diagonally from their wide starting positions, testing the positioning of Sevilla's central defenders. Julen Lopetegui's team more commonly remained in their mid-block, however. Doing so restricted the spaces that existed in behind them, and left Bayern needing to break down an organised defensive block.


Bayern's front four were particularly fluid, largely because of their efforts to manipulate Sevilla's defensive structure and create the spaces they required to advance through. They offered lateral rotations and movements in opposing directions which, when complemented with blindside runs from midfield, helped to create their equalising goal. They regularly moved possession wide, because of the extent to which the central areas of the pitch were populated by their opponents, and then back infield into the half-spaces; their rotations happened further forwards, and were far more common on the right than left.

The partnership formed by Robert Lewandowski and Thomas Müller created some promising goalscoring chances for Bayern – two of which concluded with efforts being disallowed. Their understanding of each other's positioning and movements was crucial in bypassing Sevilla's defence.

Flick's team also offered a counter-attacking threat, but struggled to make the most of it. They continued to operate in the same way during extra-time, in the knowledge that Sevilla's fatigue would lead to the opportunities they required, but it was from the second phase of a set-piece that they secured their winning goal.

Sevilla were organised by their manager Julen Lopetegui into a 4-2-3-1 formation led by the front four of Suso, Lucas Ocampos, Ivan Rakitic and Luuk de Jong. Bayern Munich also defended with a 4-2-3-1.

Given the intensity Bayern used when they were without the ball, Sevilla consistently found it challenging to maintain possession. They therefore often played direct passes to De Jong; if possession was turned over the distance from their goal meant that the risk of conceding was reduced.

They also sought to play passes around the outside of or in behind Bayern's full-backs. Those passes were occasionally met by the runs of Ocampos and Suso, or even their full-backs Jesús Navas and Sergio Escudero; in the centre Rakitic advanced to support and combine with De Jong. The willingness of Navas and Escudero to advance encouraged Ocampos and Suso to drift infield, giving Sevilla an increased presence in the penalty area ahead of potential crosses.


The introductions of Oliver Torres and Youssef En-Nesyri involved Sevilla briefly using a 4-3-3, but when Nemanja Gudelj came on they reverted to their 4-2-3-1. Joan Jordán and Torres switched between operating in a deep midfield position and as an attacking midfielder, but they continued to struggle to create goalscoring chances; Manuel Neuer was only tested in the 86th minute from an attack on the counter.

Bayern continued to press Sevilla in advanced territory, ensuring either turnovers or that their opponents would play long. To that end, Neuer's starting position remained high and aggressive; many of Sevilla's long passes were met by the goalkeeper's head or chest.

Complementing their convincing grasp of possession and the extent to which they were limiting Sevilla's options, Bayern brought on Alphonso Davies and Jerome Boateng, who between them ensured the spaces in behind them were significantly less accessible. The timing of their arrivals – in extra-time – was also influential because they had briefly appeared vulnerable.