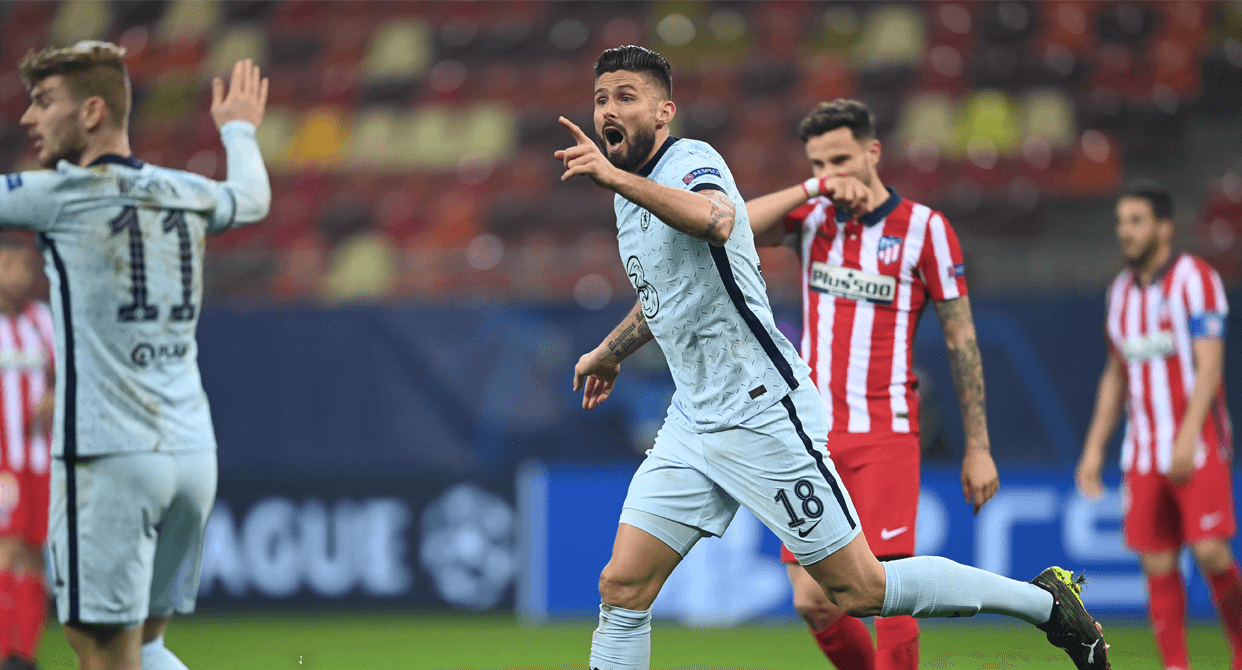 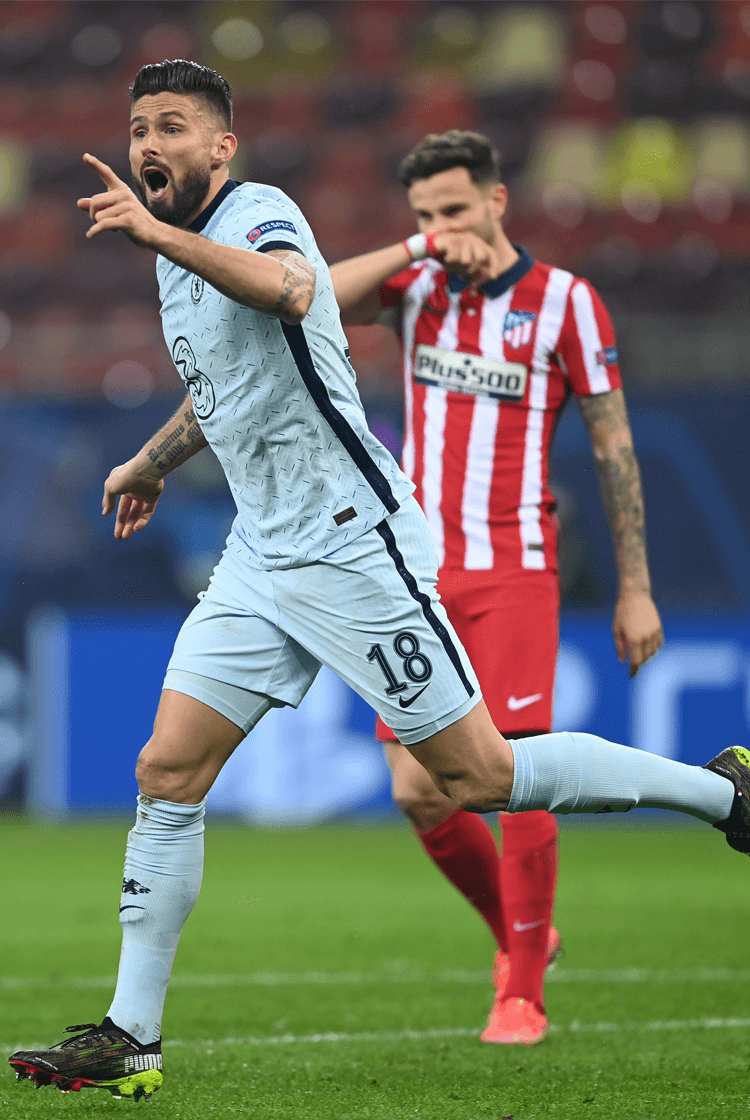 Chelsea secured the most encouraging result so far of Thomas Tuchel's reign as manager when they beat La Liga leaders Atlético Madrid in Bucharest. Against such formidable opponents their progress to the quarter finals of the Champions League is far from secure, but they will take a promising lead into the second leg under a manager whose ideas they seem to be grasping, and who led Paris Saint-Germain to last season's final. After Olivier Giroud's spectacular winning goal, Tuchel said: "We wanted to dominate in the opponents' half; to never lose concentration; not to do any easy mistakes and always be aware of quick counter-attacks for all their quality. It was a very disciplined performance – a deserved shut-out. This is the hard work, a team effort – the basis for a big win. We knew they were ready to suffer with eight people in the box." His opposite number, Diego Simeone, said: "We need to have more of the ball and position ourselves better in attack. We’ll work on it. At the moment, the game is difficult. They have an advantage, but I trust my team." 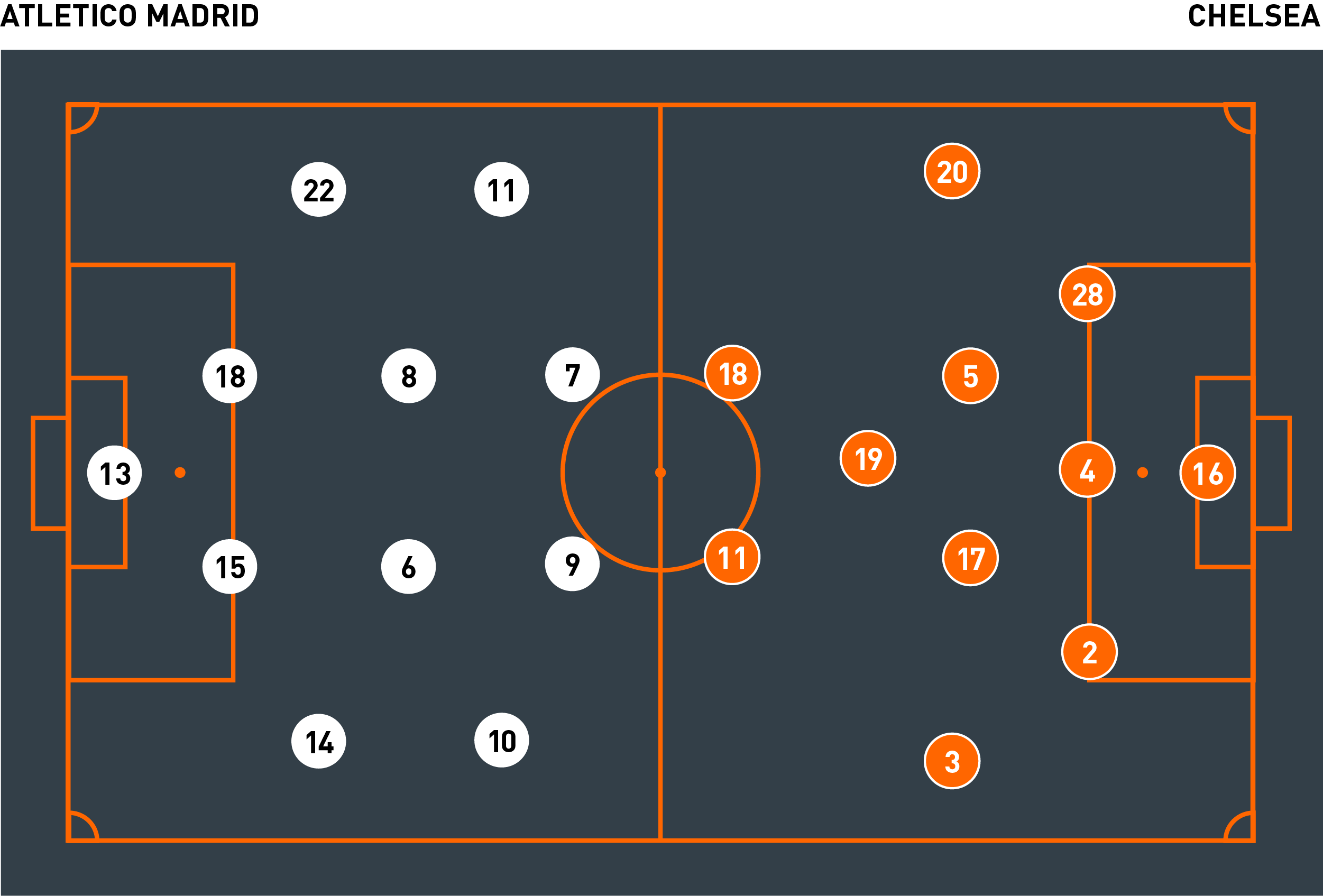 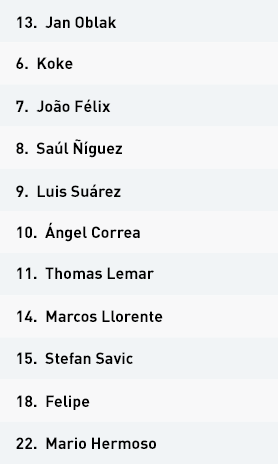 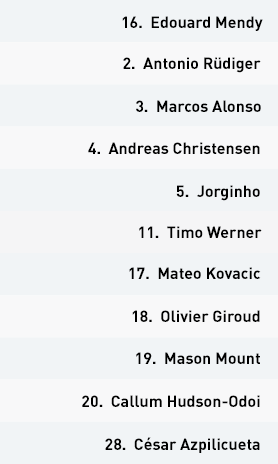 Atlético Madrid were organised by their manager Diego Simeone into a fluid 4-4-2 formation that involved them also, in periods, adopting a 4-2-3-1 and 4-1-2-3; their approach, regardless, was largely focused on the use of narrow attackers and their width coming from defence or midfield. Their opponents, Chelsea, defended with a compact 5-2-1-2.

During the first half Simeone's team occasionally sought to target the spaces between Chelsea's three central defenders and Marcos Alonso, their left-sided wing-back, via driven crosses being played across the penalty area from deep positions towards the right. On one occasion Luis Suárez, consistently their most advanced player, received the ball in an outside channel between central defender and wing-back and drove across goal towards Thomas Lemar, and on another Ángel Correa received in the inside right channel and attempted to feed Suárez as he ran to towards the near post.

Atlético were struggling to retain possession for lengthy periods, but when attempting to build attacks they did so with width and via those in central advancing to join their front two of Suárez and João Félix, to the point they matched Chelsea's back three and wing-backs man-for-man.


They remained fluid during the second half, but there were occasions when Suárez became isolated. Instead of patiently building possession, they prioritised moments in which they could overload Chelsea's defence via switching play or a change in tempo.

After Chelsea took the lead, Atlético instead prioritised moments of transition – when Chelsea's defence was less compact and organised. Similarly to the first half, they targeted the spaces between Chelsea's wider central defenders and wing-backs.

They also later took further risks with their forward movement. Suárez withdrew into deeper positions to retain possession, inviting his teammates to move into more advanced positions and to do so while occupying spaces across the full width of the pitch. Lemar and Marcos Llorente also attempted to receive the ball further forwards, and to penetrate through Chelsea's defence – again doing so between central defender and wing-back, demonstrating the extent to which Simeone had identified those spaces as a potential weakness.

Chelsea were set up by Thomas Tuchel into a 3-2-2-1-2 formation featuring Marcos Alonso and Callum Hudson-Odoi as their wing-backs, Jorginho and Mateo Kovacic as their two central midfielders, and Mason Mount behind the front two of Timo Werner and Olivier Giroud. They encountered opponents in a low block that even at times became a 6-3-1 – one they had to attempt to disorganise and disrupt.

Hudson-Odoi repeatedly adopted high and wide positions and regularly combined with Mount to progress beyond Thomas Lemar. There also existed a preference to move possession from right to left, and through Kovacic or back through their defence.

They were regardless often wasteful with possession, when they became frustrated by their opponents' compactness and defensive approach, and to the extent that they attempted to shoot from distance. Werner or Giroud withdrew into deeper positions to create a suitable angle to receive, but if they hoped to draw a defender into following them they didn't succeed. Chelsea's dominance of possession in the attacking half of the pitch also meant Antonio Rüdiger providing support in midfield, and therefore further numbers advancing.


Their sense of frustration contributed to them instead prioritising moments of transition, when they sought to play the ball in behind Atlético Madrid's defence before they had succeeded in retreating and denying Chelsea the space they required. That even then space remained limited meant Chelsea had to play with particular precision, and largely led to those attacks coming to little.

A different approach involved them building play from deeper territory in an attempt to draw their opponents forwards, and then playing lengthier passes in behind. After Giroud gave them the lead, Atlético were willing to commit increased numbers forwards and to press Chelsea higher up the pitch.

Increased spaces between their defensive lines meant Werner withdrawing into deeper positions he was previously unable to adopt, in turn creating space for him to run, and to draw Atlético's defenders. What eventually represented Chelsea's variety had meant the pattern of play changing, mostly from attempts to progress through their opponents' defensive block in transitional moments to offering intelligent, off-the-ball movements and a game-changing moment of brilliance from Giroud.