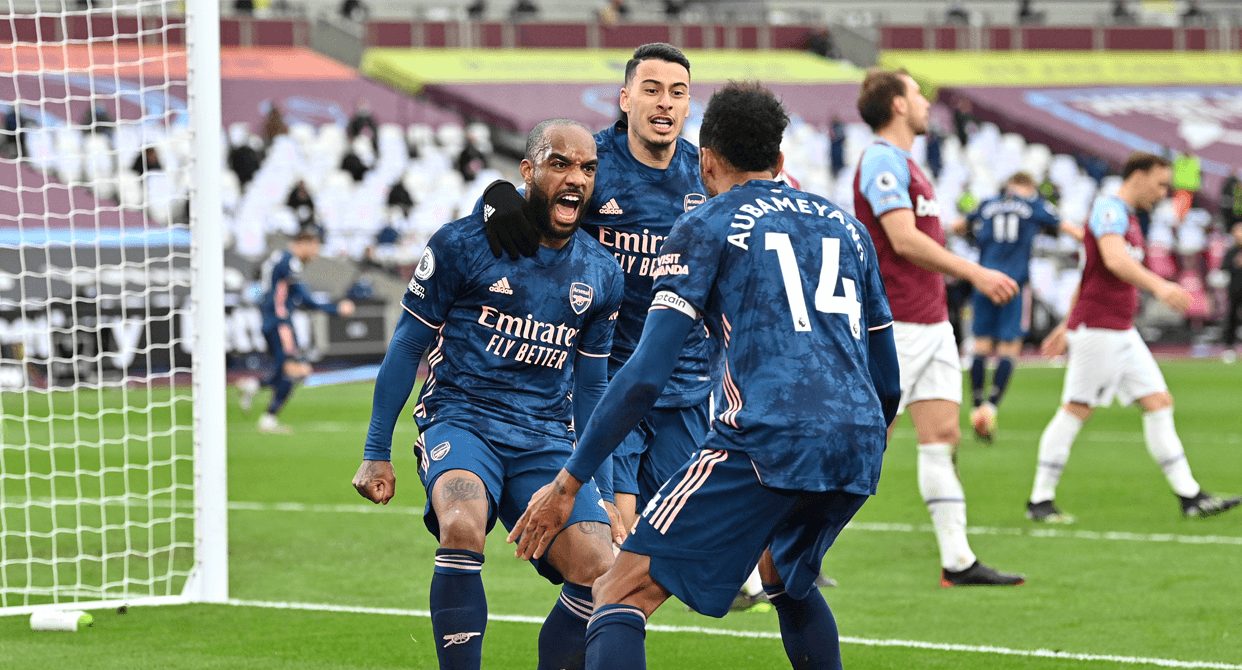 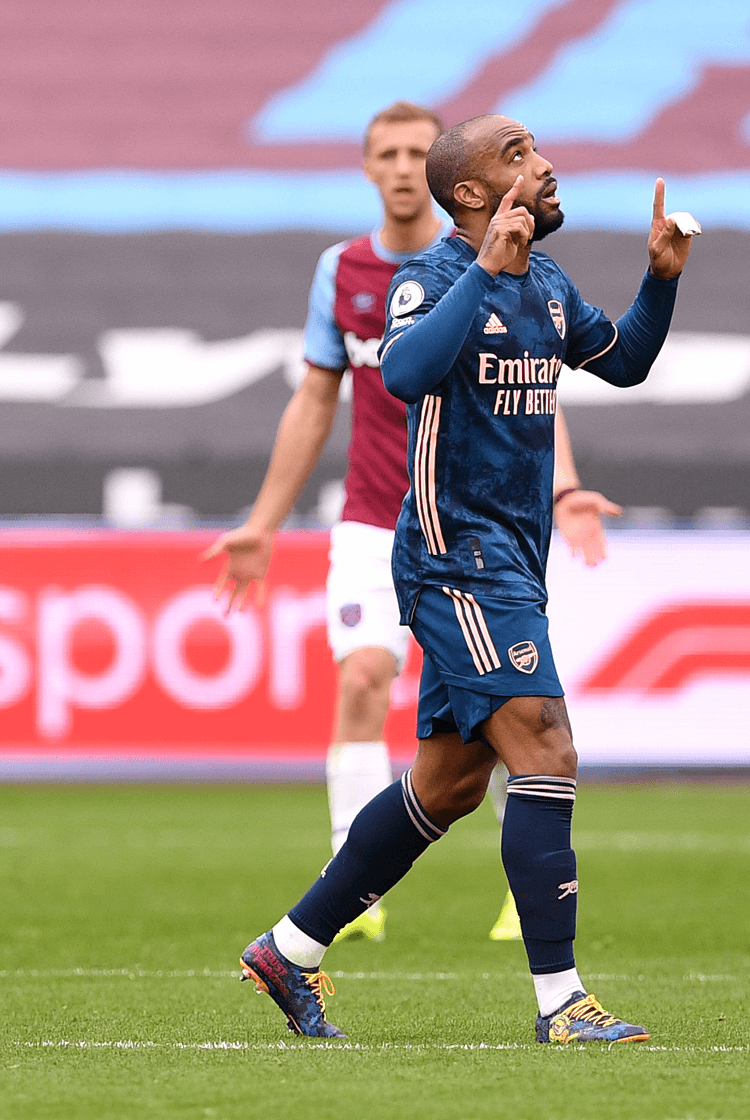 Arsenal impressively recovered from three goals down to secure a 3-3 draw at West Ham that almost became a remarkable victory. The hosts raced into a three-goal lead, courtesy of first-half goals from Jesse Lingard, Jarrod Bowen and Tomas Soucek, but in the latest demonstration of the improvements Mikel Arteta is overseeing, own goals from Soucek and Craig Dawson, and Alexandre Lacazette's 82nd-minute finish, brought them level. "That is the level we can show," Arteta said. "We could have scored six or seven goals and won the game, but we cannot have two faces. We stuck to the plan we had because we were getting further away from it. We had the belief we could do something." His opposite number, David Moyes, said: "We were playing a really good team. Sometimes people forget what we're up against. We had chances to move out of sight but we weren't able to take them." 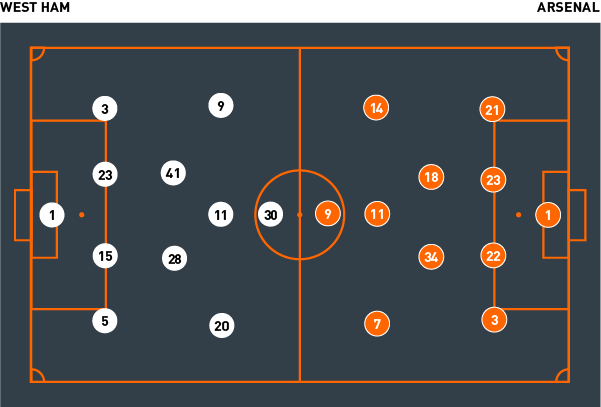 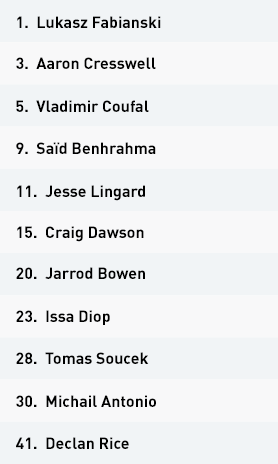 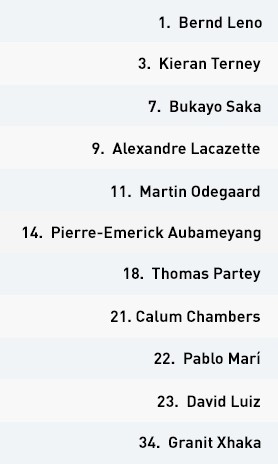 West Ham were organised by their manager David Moyes into a 4-2-3-1 formation led by Michail Antonio. Their visitors, Arsenal, defended with a 4-4-2, via Pierre-Emerick Aubameyang and Bukayo Saka withdrawing into midfield, and Martin Odegaard advancing to alongside Alexandre Lacazette.

They applied a positive approach from kick-off, by attacking with speed, and prioritised creating space from which to cross from the wide areas and into the penalty area. The relationships that existed between full-back and wide forward was essential to those efforts. Vladimir Coufal and Aaron Cresswell regularly offered overlaps and the potential to combine, and their movements were complemented by Jarrod Bowen's towards the right, and those of Antonio, Jesse Lingard and Saïd Benrahma towards the left.

All four attacking players sought to drop into spaces between the lines, in turn creating space for the full-backs behind them to advance into and also testing Arsenal's flat midfield four, because of the extent to which those movements happened on their blindside and the responsibility they had to monitor Tomas Soucek and Declan Rice. Wall-pass combinations were also prominent, and contributed to Arsenal's defenders being drawn towards the ball and therefore the creation of spaces to run into and potential give-and-gos, as was evident in the build-up to West Ham's opening goal.


Arsenal were often guilty, during the first half, of lapses of concentration regarding protecting those spaces between the lines – one such lapse encouraged West Ham to take the quick free-kick that led to their second goal. Not one of the four players around the ball acted to prevent it being played so quickly.

West Ham also continued to regularly play crosses into the area – ones that were attacked by the far-side attacker, central attacker, and Soucek, and that were supported from behind the ball by the far-side full-back at the edge of the area. Lingard largely held his position in the same territory, in anticipation of second balls and cut-backs.

During the second half they struggled for momentum, perhaps largely because Arsenal had scored shortly before half-time. For all of their desire to continue to prioritise crosses, they went without possession for lengthier periods and instead increasingly had to attack on the counter. Transitional situations led to some promising attacks, but the fourth goal that likely would have secured victory ultimately eluded them.

Mikel Arteta again set Arsenal up into the 4-2-3-1 formation he is increasingly favouring and that on this occasion featured Calum Chambers at right-back. Their hosts, West Ham, defended with a 4-4-2, through Jesse Lingard joining Michael Antonio to form their front two and Jarrod Bowen and Saïd Benrahma withdrawing into midfield.

Arsenal sought to play out from defence but early in the first half struggled to progress beyond the press led by Antonio and Lingard towards their opposing central defenders that forced those defenders wider. When the ball was then played towards a full-back, the wide midfielder opposite him would advance to close him down, and his fellow midfielders would shuffle across to close the relevant passing lanes.

Once they started to establish a rhythm, Arsenal also looked to pass through midfield to take advantage of the three-on-two that existed there, and where Martin Odegaard's willingness to withdraw into a deeper position tested both Tomas Soucek and Declan Rice, who already had to defend against Thomas Partey and Granit Xhaka. Alexandre Lacazette recognised that spaces existed between the lines behind Rice and Soucek, and therefore regularly withdrew into them to increase Arsenal's potential in midfield.

If possession was central, West Ham retained a narrow shape in an attempt to encourage Arsenal to take the ball wide, but if Arsenal advanced into the half-spaces – potentially via that three-on-two – the hosts' midfielders spread to also defend against the full-backs advancing to attack, but at the risk of creating new spaces their opponents instead played through.


Despite regularly progressing beyond West Ham's midfield, during the first half Arsenal struggled to execute the passes that would then lead to goalscoring chances. Spaces between the lines regardless continued to exist, and more efficient play between their wide forwards and full-backs meant that they started to progress with width after moving beyond the midfield third, and to the extent that all three of their goals owed to that progress.

Beyond their movements between the lines, when those movements were unfolding, Arsenal's attacking players offered runs in behind, testing their opponents' desire to track them or hold their positions – there were occasions Arteta's team almost capitalised on their indecision. Mark Noble replaced Jarrod Bowen during the second half and, with Rice and Soucek, formed a midfield three in an attempt to give them greater security in midfield. A further attempt to negate the overload that existed in midfield involved their front two closing down the in-possession central defender and occupying the ball-side central midfielder, and there was also an inconsistency to West Ham's attempts to mark in midfield. Despite falling three goals behind, Arsenal largely controlled the second half and became the likelier winners.