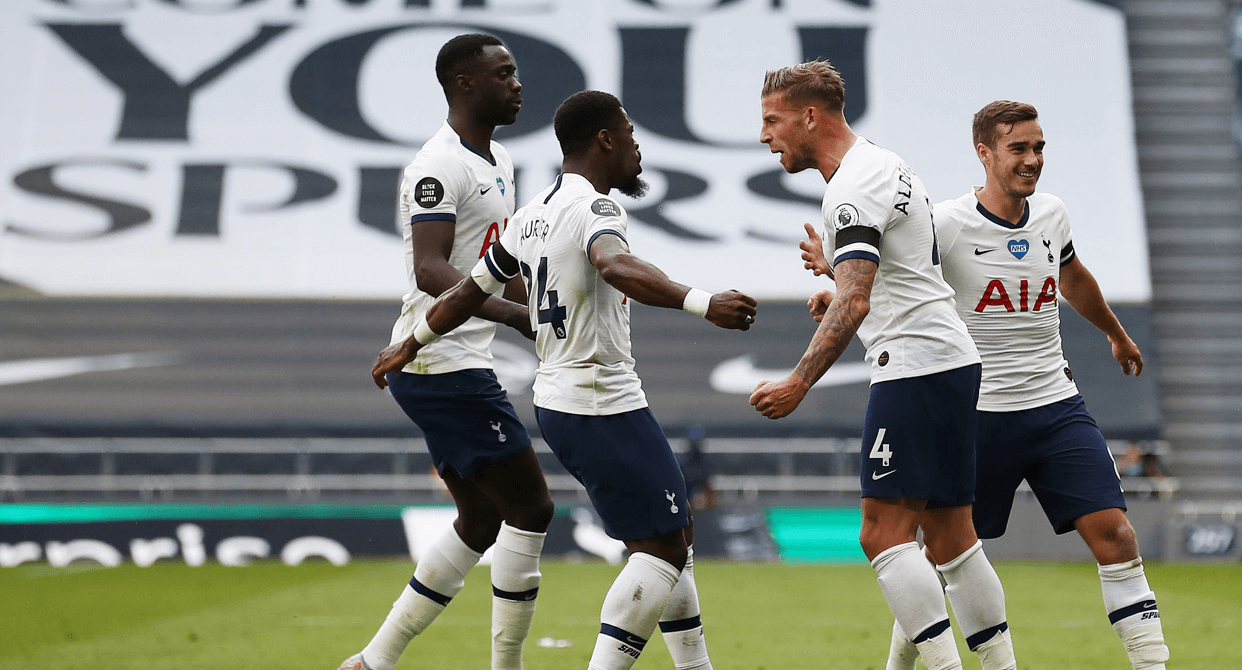 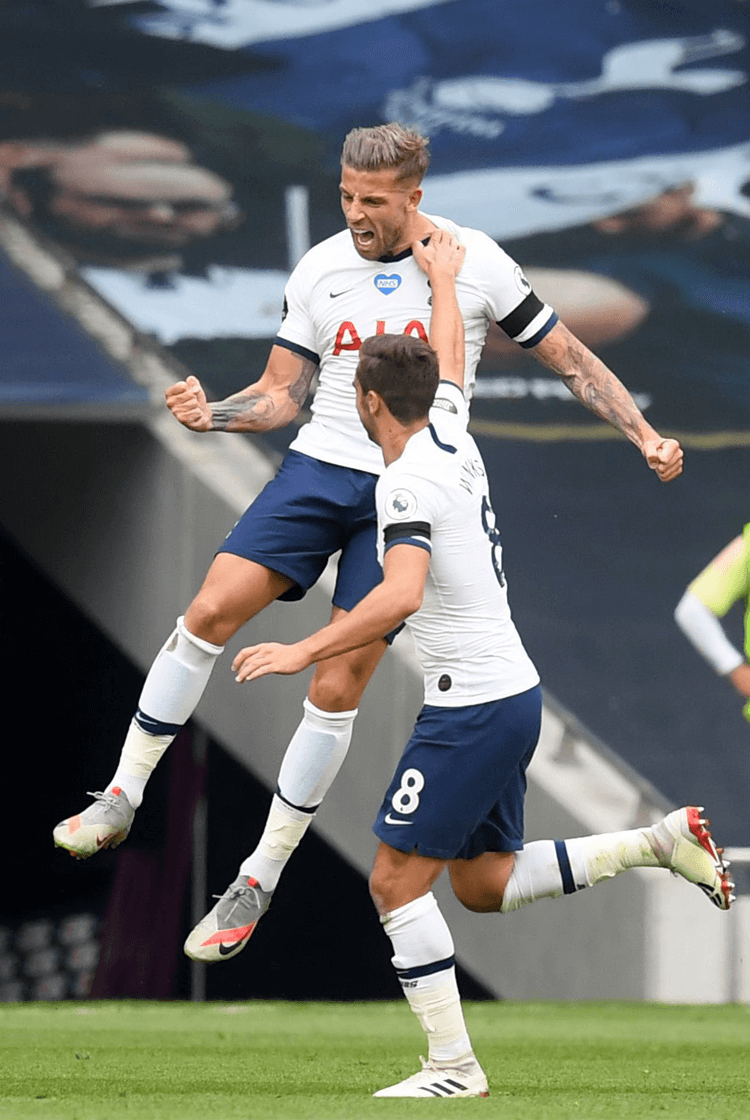 A late header from Toby Alderweireld gave Tottenham victory over rivals Arsenal in the first North London derby overseen by José Mourinho and Mikel Arteta. Spurs therefore remain in contention for the sixth-placed finish that increasingly looks beyond Arsenal, and perhaps as importantly, the three points earned moved them above their rivals and up to eighth. The visitors took the lead in the 16th minute when Alexandre Lacazette struck beyond Hugo Lloris, but Son Heung-min swiftly brought Spurs level, and in the 81st minute Alderweireld secured victory. "Arsenal had 48 hours more than us to rest, so it was hard," Mourinho said. "But it came from their hearts this effort, this battle. Even in the last minutes of the game after 2-1, zero problems, everything under control, so we are happy. We are happy because we are still in the fight to win a Europa League position." His opposite number, Arteta, said: "I was really proud of the way we played, the way we approached the game, the way we dominated the game. We nullified the opponents but when we play at this level you have to win the game." 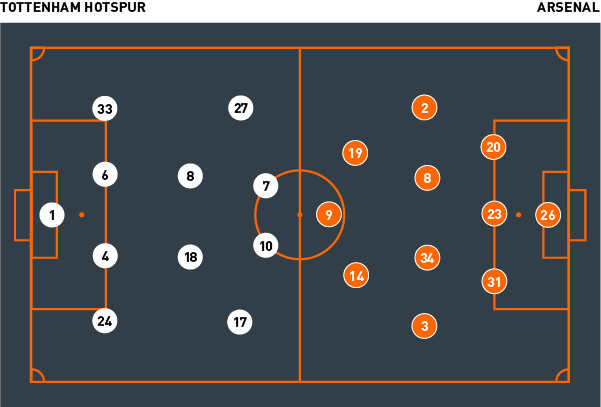 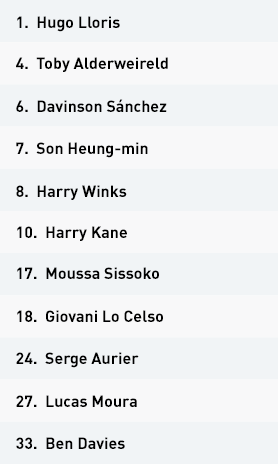 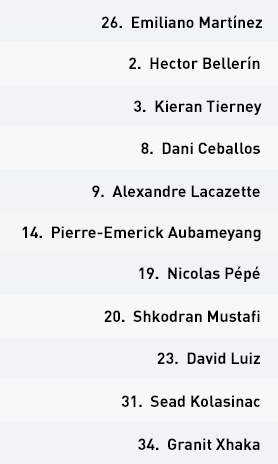 Tottenham were organised by José Mourinho into a 4-2-4 formation in which Harry Winks and Giovani Lo Celso formed their midfield. Arsenal defended with a 5-4-1, through Hector Bellerín and Kieran Tierney withdrawing into defence.

Arsenal sought to press Spurs' defence, via their front three of Pierre Emerick Aubameyang, Alexandre Lacazette and Nicolas Pépé. They tried to turn that four-on-three into a three-on-three by encouraging play in one direction and then using that front three to close down the two central defenders and the ball-side full-back, contributing to a two-on-two between Dani Ceballos and Granit Xhaka, and Winks and Lo Celso. There were also periods in which Serge Aurier advanced as their right-sided forward, and Moussa Sissoko drifted inside to create a five-strong attack, ultimately creating two five-on-fives.

Spurs often opted to play direct balls from both Hugo Lloris and their central defenders. They used their attackers to challenge for possession, offer support, and make runs beyond Arsenal's defence, with the intention of unsettling their visitors. They, similarly, targeted the spaces behind Arsenal's wing-backs via diagonal runs from Kane and Son into those spaces, or vertical ones from Sissoko and Lucas Moura.


It was positive to see Kane attempting to attack beyond Spurs' defence, instead of withdrawing to towards the ball, and some of Spurs' better goalscoring chances owed to that, and even led to the corner from which they scored their winning goal. Mourinho's team were prioritising their out-of-possession responsibilities, and attacking on the counter.

The positioning of Moura and Sissoko contributed them taking advantage of Bellerín and Tierney advancing and stretching Arsenal's three central defenders, and the one-on-ones they would win against them. Those movements were encouraged by releasing the ball as early as possible into the runs they were making, and were complemented by the presence they offered in central areas.

Mikel Arteta set Arsenal up in a 3-4-3 formation; Tottenham defended with a flat 4-4-2. The possession statistics show that, with 62 per cent, Arsenal dominated the ball, but Spurs' shots on target total of nine to Arsenal’s four gives a much more accurate reflection of what transpired.

Spurs worked to deny Arsenal access to their key players and to force them into attacking in ways that did not suit them. Harry Kane and Son Heung-min pressed Arsenal's three central defenders, and created a two-on-two by preventing the switch to the third of that three when possession was with either of the wider central defenders. When the ball was central with David Luiz, Kane and Son remained central and waited for him to move possession to either side; when the ball moved to the wider central defender, Kane or Son closed the ball down but, crucially, also screened the ball-side central midfielder to stop a pass towards him.

Giovani Lo Celso and Harry Winks maintained positions close to Granit Xhaka and Dani Ceballos in central midfield. When one of Arsenal’s back three moved with the ball into the half-space, Lo Celso or Winks and the relevant wide midfielder ensured that a pass couldn't be played into the feet of Arsenal’s wide attackers, Nicolas Pépé and Pierre-Emerick Aubameyang. This worked superbly, and meant that two of Arsenal’s most dangerous players had little impact.

A diagonal pass outside and into the feet of the wing-back therefore became Arsenal’s only option when attempting to progress possession. Spurs managed this pass with three players – the wide midfielder, the near-side central-midfielder and a full-back – working to prevent spaces opening up between their full-back and central defender. Pépé and Aubameyang began withdrawing to towards the ball, opening the diagonal passing lane to the wing-back in an advanced position, before their wide attackers made penetrative runs in behind. Lucas Moura and Moussa Sissoko worked extremely hard, however, to make recovery runs to nullify the threat that that represented.


With Arsenal struggling to penetrate through Tottenham’s well-organised defence, they circulated possession. They switched play through Alexandre Lacazette dropping towards the ball and creating a diagonal passing line from the wider central defender. The striker could then set the ball to a forward-facing midfielder who could switch play; Lacazette’s movements drew one of Spurs' central defenders out of position, causing the remaining defenders to squeeze closer together to remain compact, and therefore creating increased spaces out wide. Despite them doing so, Spurs also resisted Arsenal's attempted wider possession.

The movement of Arsenal's front three was underwhelming and, beyond those movements, they did little to manipulate Spurs' defence. There were few penetrations into the space behind that defence. Arsenal’s best goalscoring opportunities came through mistakes made in possession by their opponents near their own goal

When Arsenal won possession in midfield, Spurs dealt with the threat they posed by delaying the ball carrier and eliminating forward-passing opportunities while the relevant individuals recovered their defensive positions. Spurs were also willing to commit tactical fouls if they felt their opponents posed a significant threat.