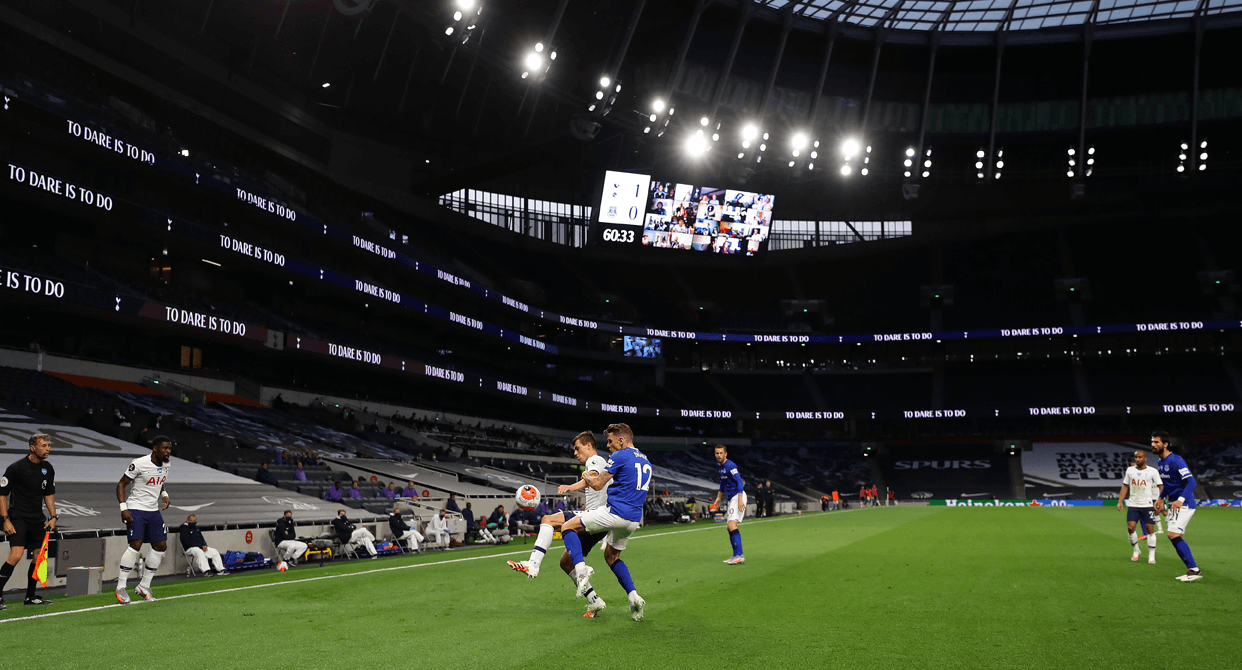 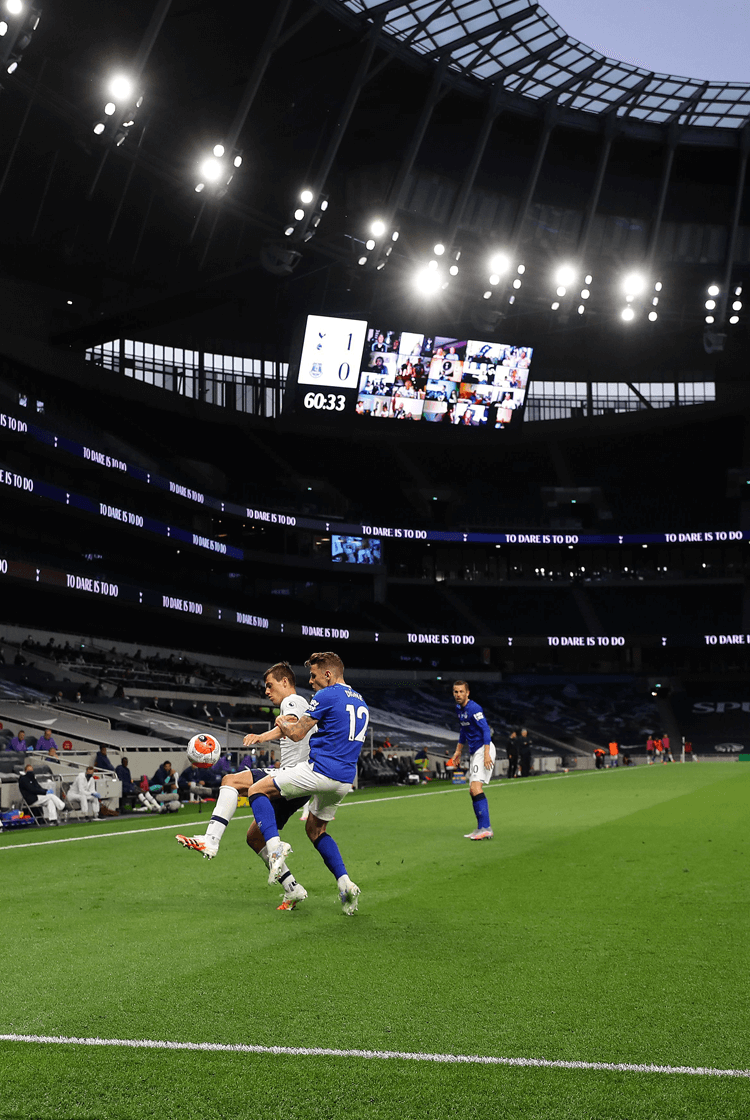 José Mourinho oversaw his 200th victory as a Premier League manager when Tottenham defeated Everton to maintain their pursuit of a top-six finish. Giovani Lo Celso's strike was deflected beyond Jordan Pickford by Michael Keane to give them the lead, and Carlo Ancelotti's team thereafter struggled to create goalscoring chances. The three points earned mean Spurs remain within four of sixth-placed Wolves – managed by Mourinho's former player Nuno Espírito Santo – and four above 11th-placed Everton. Since Ancelotti's appointment, however, only Liverpool, Manchester City, Manchester United and Arsenal have gained more points than Everton. Mourinho's milestone makes him only the fifth manager to experience 200 victories in the Premier League – Sir Alex Ferguson, Arsène Wenger, David Moyes and Harry Redknapp are the others. 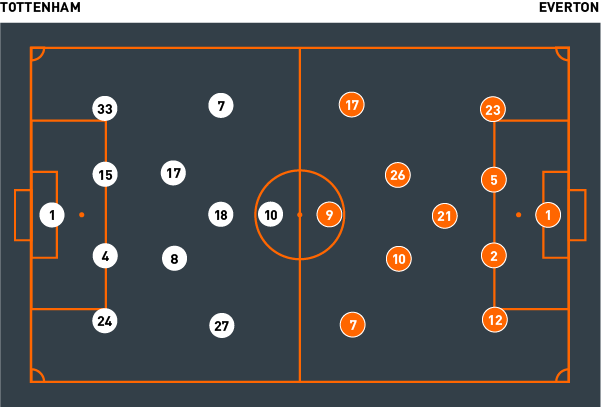 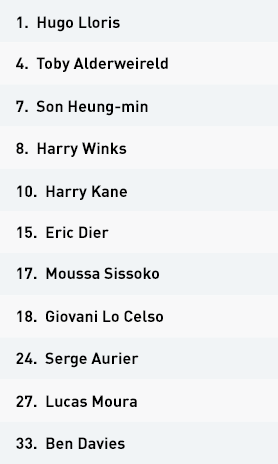 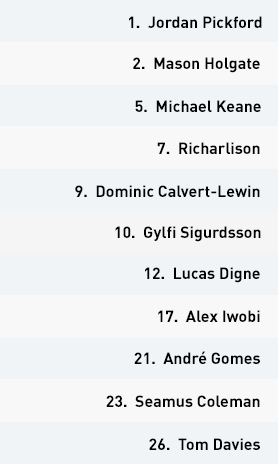 José Mourinho lined his Tottenham team up in a 4-2-3-1 formation when they had possession. Their number 10 Giovani Lo Celso drifted into the inside channels on both sides to receive possession around the side of Everton’s central midfielders; Harry Winks withdrew to towards the two central defenders in front of Everton’s first line of pressure – made up of Dominic Calvert-Lewin and Richarlison – and Moussa Sissoko sought to receive passes behind that front two.

Spurs' full-backs advanced to provide width, and also to encourage Son Heung-min and Lucas Moura to remain narrow and to support Harry Kane behind Everton’s midfield four. Alex Iwobi’s deep defensive position, which often created a back five for the visitors, instead prevented the hosts from using cross-field switches to the advanced Serge Aurier – a key pattern in previous matches, especially when initiated by Spurs’ left-sided central defender.

With Iwobi withdrawing well into defence, space was afforded to Lucas when he drifted away from Everton defence's to receive possession. When Spurs found Lucas in this pocket of space and he turned towards goal, the hosts posed their greatest attacking threat of the first half.

The evening's only goal, however, came after Lo Celso and Son impressively combined towards the left. Their movements created space between the lines for Lo Celso to shoot, and his effort deflected off of Michael Keane and beyond Everton goalkeeper Jordan Pickford.


Everton’s lopsided formation – and, with Iwobi so deep, their uneven midfield – maintained what was often their 5-3-2 defensive block and offered space for Spurs to progress beyond midfield, though they created few chances of note. Once they had drawn Everton’s remaining three midfielders across to the right, switches of play back to Son, Lo Celso and Ben Davies left Everton struggling to recover. As the danger increased, Everton’s isolated defenders resorted to conceding fouls in dangerous areas on several occasions.

Iwobi was replaced at half-time, and Everton switched to a 4-4-2 when out of possession. Spurs' full-backs continued to advance, and Lo Celso and Son remained close to one another to attempt to exploit gaps in the left inside channel. Mourinho's team persisted with switches of play but was repeatedly let down with a poor final ball into the frustrated Kane.

As Spurs withdrew to protect their lead, they created space in behind their opponents, and almost took advantage with long, direct balls into that space. Lucas and Son also attempted to dribble into the spaces between the lines – ones that existed as a consequence of Spurs’ deeper positioning – before then shooting from distance, but neither tested Pickford. The hosts rarely threatened to score a second goal.

Everton were organised by their manager Carlo Ancelotti into a 4-3-3 formation when they had possession. Their full-backs provided their attacking width – Lucas Digne, particularly, moved into advanced territory – Tom Davies and Gylfi Sigurdsson often drifted from central midfield to cover as false full-backs, and André Gomes provided the link between defence and midfield

Tottenham pressed them, at dead balls, from a 4-3-3, but as Everton progressed forwards, that 4-3-3 became a 4-1-4-1 mid-block; the movements and passing of Davies and Richarlison prioritised feeding Alex Iwobi and Richarlison unless that press forced them along the touchline as they received, and therefore limited their options. Possession was often regained in these circumstances – Giovani Lo Celso, particularly, duelled with tenacity, and did so in support of the press being applied by Son-Heung min. It often took Dominic Calvert-Lewin withdrawing from his position as Everton's most advanced player to help them to evade Spurs' wider press.

Spurs took the lead via Lo Celso's deflected effort, and thereafter largely remained in a 4-2-3-1 mid-block. With Son and Lucas Moura continuing to prioritise nullifying the creative threats posed by Everton's false full-backs, and Harry Winks and Moussa Sissoko in better positions to block passes towards Calvert-Lewin, Ancelotti's team resorted to aerial passes along the touchlines towards their advancing full-backs, or to the wide-moving Iwobi and Richarlison. Neither offered significant potential.


Anthony Gordon replaced Iwobi at half-time, at which point Sigurdsson stopped operating as a false full-back and Everton instead built possession via a 3-1-5-1 that gave them an additional midfielder rotating between the lines without sacrificing the attacking width provided by their full-backs. Within that structure, Davies also occasionally moved to form a double pivot alongside Gomes

What they continued to lack were quality final balls, particularly given Gordon often reached the right inside channel, and Calvert-Lewin remained frustrated when he could have threatened a potentially vulnerable central defence. It was Digne, advancing from left-back, who offered the most potential, but with Spurs withdrawing into a deeper 4-2-3-1 defensive block, they had increased numbers to defend against his deliveries in the final third.