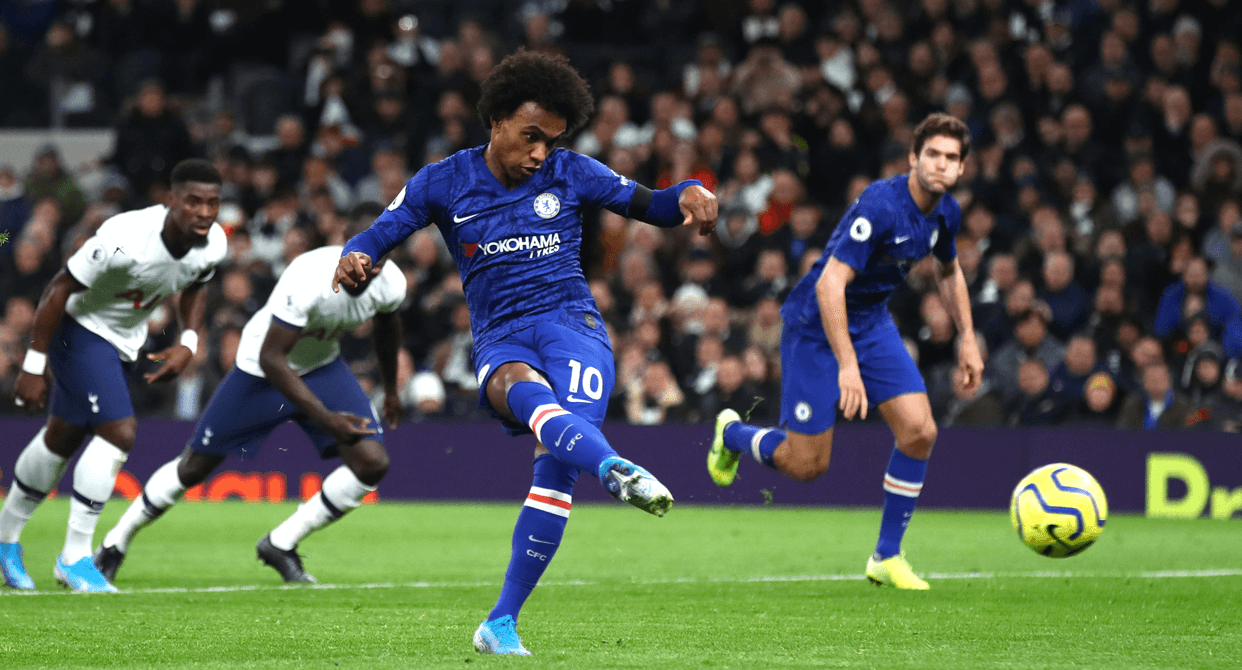 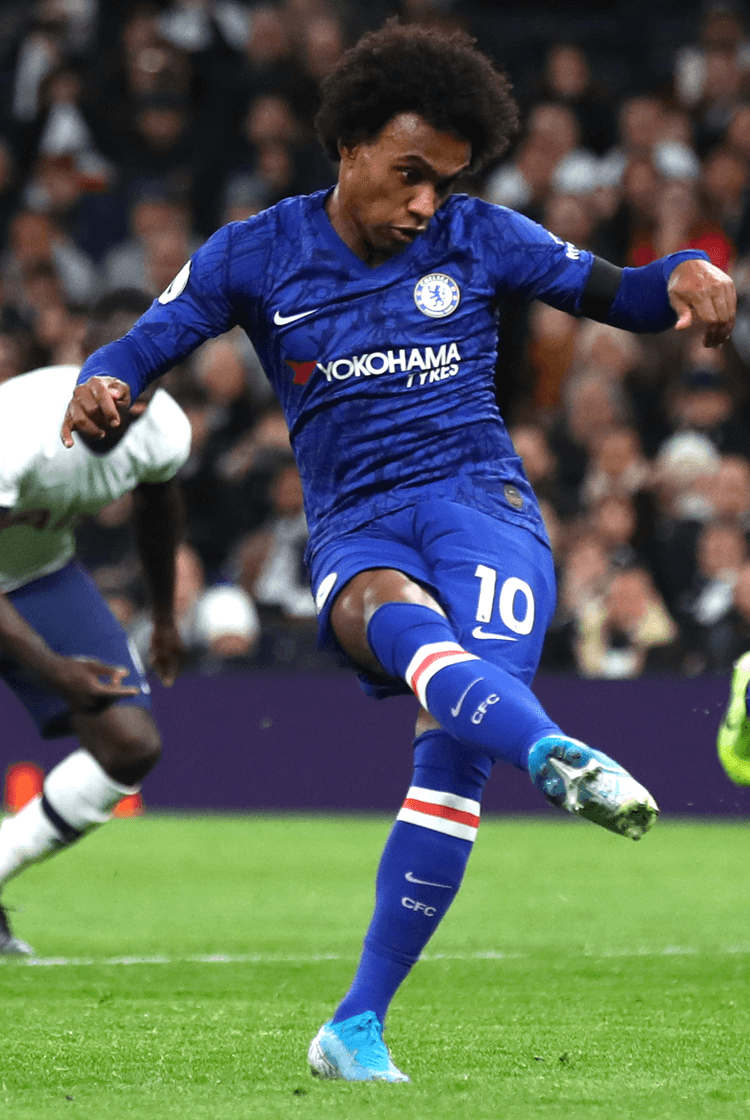 Chelsea secured a significant victory at rivals Tottenham, but on an occasion that was largely overshadowed by alleged racist behaviour aimed at the visitors' defender Antonio Rüdiger. The Germany international was involved in the second-half incident that led to Son Heung-min's dismissal, and shortly afterwards appeared to gesticulate that he had been racially abused by supporters present. Frank Lampard's team had impressed, essentially securing all three points during the first half, and significantly kept a first clean sheet under their manager in an away league fixture. Son's red card also makes him the first to be shown three in the competition in a calendar year since Lee Cattermole, in 2010. "We didn't start well," said Mourinho. "Chelsea started better than us. They scored from a short corner and that disappoints me. We were not focused. The second goal is a bad goal to concede. The penalty is a penalty; good decision." 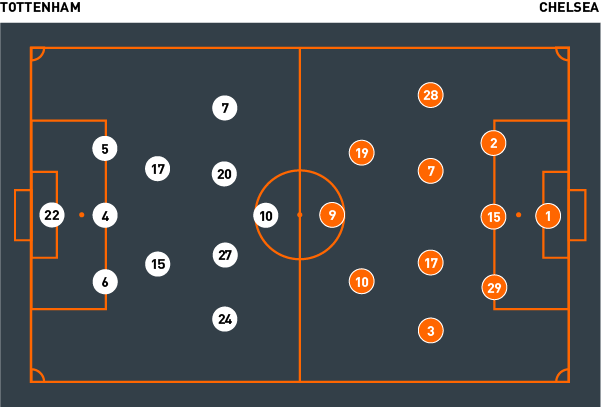 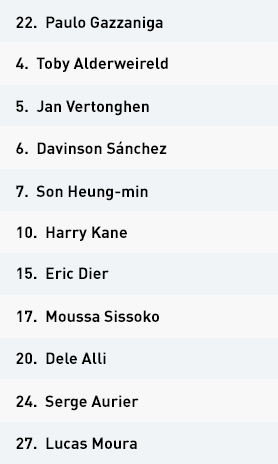 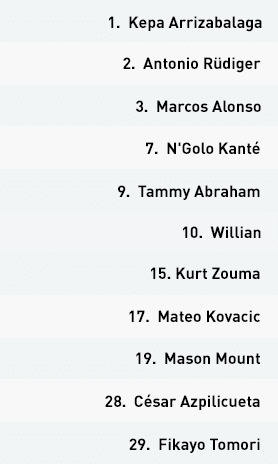 Tottenham were organised by their manager José Mourinho into a 3-4-2-1 formation, in which Serge Aurier, Lucas Moura, Dele Alli and Son Heung-min represented the attacking quartet supporting their lone striker, Harry Kane. They were confronted by opponents who defended with a 5-2-3 they struggled to play through. Where using Aurier high and wide, and Moura inside, to encourage two-on-ones had previously succeeded, Chelsea's back five limited the opportunities they would ordinarily expect.

A lack of movement from those in the final third contributed to vertical passes being played to feet, and therefore the recipient controlling possession with his back to goal, and often struggling to advance. Frank Lampard's team also pressed their hosts high up the pitch during build-up phases, forcing them to play long balls that Antonio Rüdiger, Kurt Zouma and Fikayo Tomori comfortably defended against.

Their only progress during the first half came when Moussa Sissoko made forward runs to break Chelsea's midfield line and draw a defender – most commonly Marcos Alonso – ultimately creating the two-on-ones they sought. When for the second half Eric Dier was replaced by Christian Eriksen, Moura also began to feature as a wing-back, in an attempt to increase their passing options from central areas.

That Chelsea by then led by two goals invited them to adopt a deeper defensive line and to increasingly play with a mid-block, to restrict the spaces in behind that Spurs would have otherwise targeted. The spaces they instead had were largely on the outside, encouraging them to use Aurier and Moura in their pursuit of opportunities to cross. Chelsea were impressively organised in those positions; the relevant wing-back and ball-side central midfielder combined to defend the wide spaces, freeing up the three central defenders and the far-side wing-back to prioritise the penalty area.

Son's red card, in the 62nd minute, essentially ended any hope Spurs would still have had of securing a draw. They had already struggled, numerically, to create overloads and, against 10 men, the visitors' defensive structure was thereafter largely untroubled.

Frank Lampard again demanded Chelsea adopt a 3-4-3, led by their lone striker Tammy Abraham. Tottenham defended with a 4-1-4-1 that featured Eric Dier as the single pivot between defence and midfield, and with a mid-block.

The hosts were content for Chelsea's central defenders to have possession in their own half, to encourage them to play into wide areas, and to restrict access into midfield, but their rivals responded by drawing them wide and then playing long, diagonal passes to the opposite side of the pitch – one such pass contributed to their opening goal. They regardless had to remain patient in possession, largely through circulating the ball in defence.

Much of their attacking threat came via the movements made by Mason Mount and Willian. Both were given the freedom to roam and to find spaces between the lines, from where they could receive, turn and advance, and they largely did so on the blindside of the nearest opponent, to overload that opponent, and to eliminate them from the relevant passage of play.

They were also influential during attacking transitions. Chelsea sought to play forwards quickly, after turnovers, and Mount was particularly swift to make forward runs off the ball, into a position that would initially negate counter-presses if he received possession. In combination with Abraham, Mount and Willian created further goalscoring chances, but ones that were not taken.